Tensions ahead over changes to 'race and religion' laws

A planned law to protect women could see the repeal of some sections of four controversial laws enacted by the previous government, a prospect that has angered nationalist leaders.

THE GOVERNMENT appears to be on a fresh collision course with Buddhist nationalist groups, with officials confirming that a planned Law for the Prevention of Violence Against Women will override some sections of the “race and religion” laws championed by Ma Ba Tha.

The revelation has apparently prompted warnings from Ma Ba Tha figurehead U Wirathu, after a post to his Facebook account said that the move could spark a “rebellion” that would fill the country’s prisons.

The draft law is being finalised by the Union Supreme Court and Union Attorney General’s Office and will soon be submitted to the Pyidaungsu Hluttaw for consideration, said Daw Naw Tha Wa, director of the Ministry of Social Welfare, Relief and Resettlement’s Department for the Development of Women.

This was contradicted by Dr Mya Thaung (NLD, Bago-7), chairman of the Amyotha Hluttaw Committee for the Rights of Women and Children. He said the race and religion laws would be amended at the same time as the Law for the Prevention of Violence Against Women is enacted to remove any inconsistencies.

“I do not know all of the details in the new law so I don’t know what will be amended,” he said. “But if the new law is approved, the old ones must be amended [if they are not in conformity].”

Critics say the four laws are a violation of Myanmar’s human rights obligations and appear to target the Muslim community.

All four were approved by the previous hluttaw in 2015 and enacted by President U Thein Sein. Ma Ba Tha – known in English as the Association for the Protection of Race and Religion – and other nationalist groups had threatened nationwide protests if the laws were not enacted by the end of Thein Sein’s term. After they were approved, nationalist forces campaigned for Thein Sein’s Union Solidarity and Development Party in the November 2015 election.

The NLD accused its rival of violating electoral laws and the constitution by using religion to political advantage, but ultimately won a decisive victory in the vote.

Since taking office the NLD has sought to rein in Ma Ba Tha’s activities. In July 2016, Minister for Religious Affairs and Culture Thura U Aung Ko threatened to take action against Wirathu and other nationalists for allegedly spreading hate speech, while the State Sangha Maha Nayaka Committee declared that Ma Ba Tha was not a recognised Buddhist organisation.

But the decision to tackle the race and religion laws represents a new and potentially risky challenge to Ma Ba Tha and other nationalist forces.

Naw Tha Wa cited several examples of where the new legislation would overrule the existing laws. It would give women the right to make their own decisions on family planning and conception, contradicting provisions of the Population Control Healthcare Law.

She said that under the Monogamy Law, a woman could face legal action if she married a married man even if she did not know that he was already married. Additionally, because this marriage would not be recongised, she and her children would not be entitled to any inheritance.

Naw Tha Wa said these “unfair” provisions would be rectified in the new law, adding that regardless of the circumstances in which a marriage takes place, the rights of women and their children should not be overlooked.

The new law will also enable a woman and her children to be placed in the custody of a court in the event of a disagreement or problems within a marriage, she added. 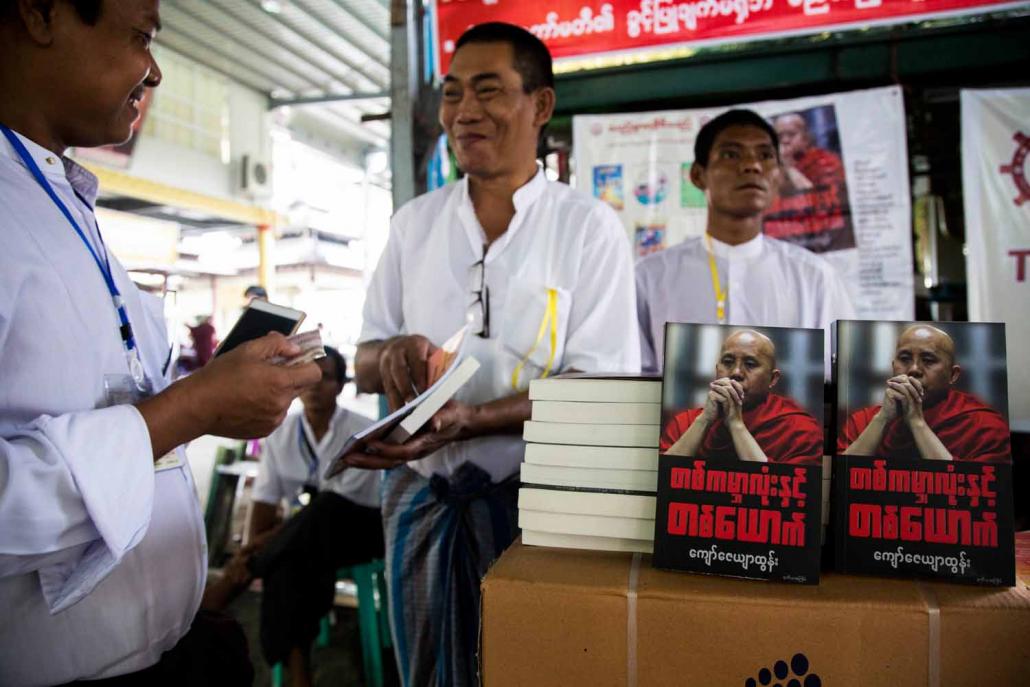 Copies of U Wirathu’s biography on sale at a ceremony in Yangon in June 2016 to mark the third anniversary of the founding of the Association for the Protection of Race and Religion. (Ann Wang / Frontier)

Frontier was unable to contact Ma Ba Tha leader Wirathu directly. But the “Wira Thu” Facebook page, which he has previously told Frontier was his, posted a response to the new law under the heading, “Don’t they realise the real strength of Ma Ba Tha?”

“Do it if you think you can. You’ll come to know who is Wirathu and what is Ma Ba Tha,” it reads.

“Wait a moment! You said it clashes with law of women’s rights. Which point does it clash with?

“It’s plain to see you’re enacting a new law not with the intention of doing something good for women but because you want to annul the race and religion protection laws. Unable to do anything to make the country prosperous, you are planning to destroy the country instead. So show us the new law. Show us the points in the existing law that you say go against the new law.

“If you try to do it by force, it will spark a rebellion that will make the prisons overflow.”

The NLD could also face a challenge from the USDP, which since the election has re-affirmed its policy of “protecting race and religion” in an effort to appeal to conservative Buddhists.

He also issued a warning to the NLD if it tries to amend the laws. “If you dare to amend our race and religion laws, just wait and see how the people respond.”

“If you look at the laws closely, you will find that they are really needed. … They can reduce marital problems,” he said.

He noted that more than one million people, including many women, had signed a petition calling for the laws to be introduced.

But the move has been welcomed by women’s rights activists, with Daw Khin Lay, leader of Triangle Women Support Group, saying the race and religion laws “should not have been enacted in the first place”.

“Instead of the race and religion laws, this law for the protection of women from violence should be enacted and enforced effectively,” she said. “It covers all women citizens aged 18 and above. Laws should be equal and impartial for all races and religions.”

The planned amendments are also likely to win praise from the many international critics of the laws, including United Nations special rapporteur on human rights in Myanmar Ms Yanghee Lee.

In October 2015, she told the UN General Assembly that the race and religion laws “clearly violate Myanmar’s human rights obligations” that contained a “divisive and discriminatory intent”.

In March, Lee will deliver her annual report on the human rights situation in Myanmar to the UN Human Rights Council.

TOP PHOTO: U Wirathu speaks at a press conference in Yangon on July 7, 2016. (Teza Hlaing / Frontier)