The military has been accused of laying landmines along the border with Bangladesh, causing death and disability to those fleeing violence in northern Rakhine State.

SOURCES AT two refugee camps on the Myanmar-Bangladesh border have accused the Myanmar military of laying landmines in the path of those fleeing conflict in northern Rakhine State.

Frontier spoke to more than a dozen witnesses – including two members of the Bangladesh Army who spoke on the condition of anonymity – who said that soldiers from the Tatmadaw had laid the landmines in early September. The mines have allegedly killed at least two people and left one person permanently disabled, all in separate incidents.

An estimated 507,000 people – mainly Muslims who identify as Rohingya – have fled northern Rakhine since late August. The violence erupted when the Arakan Rohingya Salvation Army attacked 30 police outposts and an army camp on August 25, killing about a dozen security personnel.

Many of those arriving in Bangladesh have accused the Myanmar military of using disproportionate force in their clearance operations, as well as committing a range of abuses, such as rape, arson and murder. The army and civilian government have denied the accusations and instead blamed ARSA for the violence and destruction.

The government has also said ARSA is using improvised explosive devices in their attacks. Asked about the use of mines on the border, spokesman Zaw Htay told Reuters in early September, “Who can surely say those mines were not laid by the terrorists?” Military spokesperson Major-General Aung Ye Win refused to comment when contacted by Frontier. 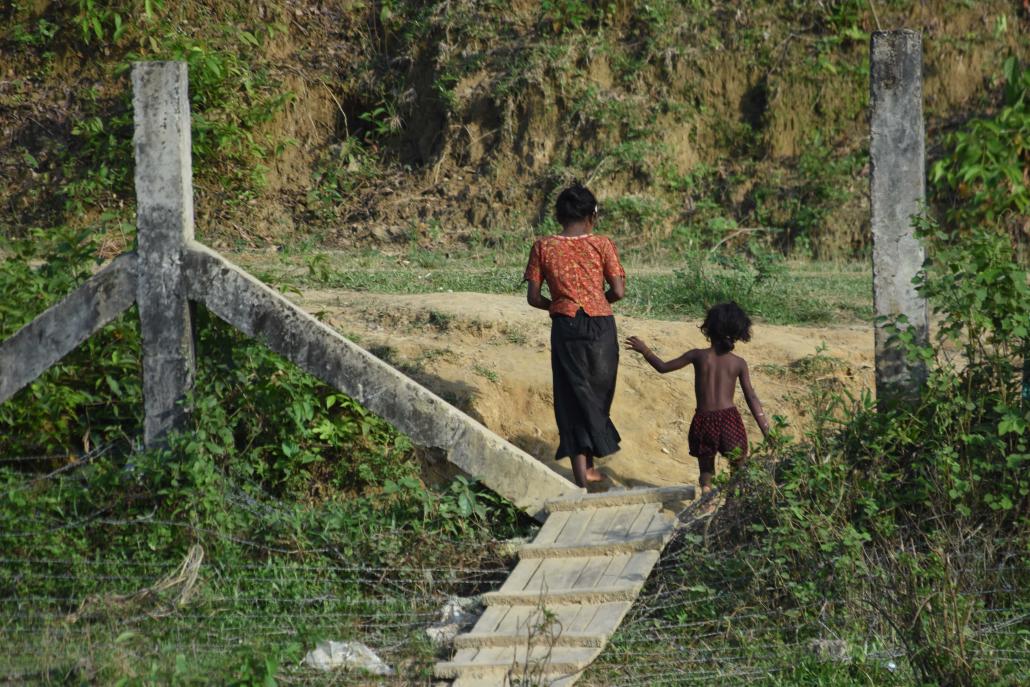 In one incident on September 4 near Boro San Kalar camp – in an area on the border close to Naikhonchari known as “No Man’s Land” – two people were killed in landmine explosions.

Villagers said a Muslim from Myanmar and three of his buffalo were killed by an initial explosion. A Bangladeshi man who volunteered to go to the heavily forested area to retrieve the body was then killed in a separate detonation.

Members of the Border Guard Bangladesh, who are responsible for security at the camp, retrieved the Bangladeshi man’s body but the other body is still in the jungle, camp residents and BGB soldiers said.

“Because people think there are still landmines, the man’s body is still out there,” said Ma Hafeja Khartou, a resident of the Boro San Kalar refugee camp. She said she heard one of the explosions and had seen the Bangladeshi man’s body being carried by the BGB.

Several camp residents told Frontier they had seen Tatmadaw soldiers walking close to the border hours before the explosions, and accused them of laying the landmines. A member of the Bangladesh Army also told Frontier that the Myanmar army had placed landmines in the “No Man’s Land” area. On September 6, Bangladesh officials told Reuters they had lodged an official protest over the alleged laying of landmines along the border. 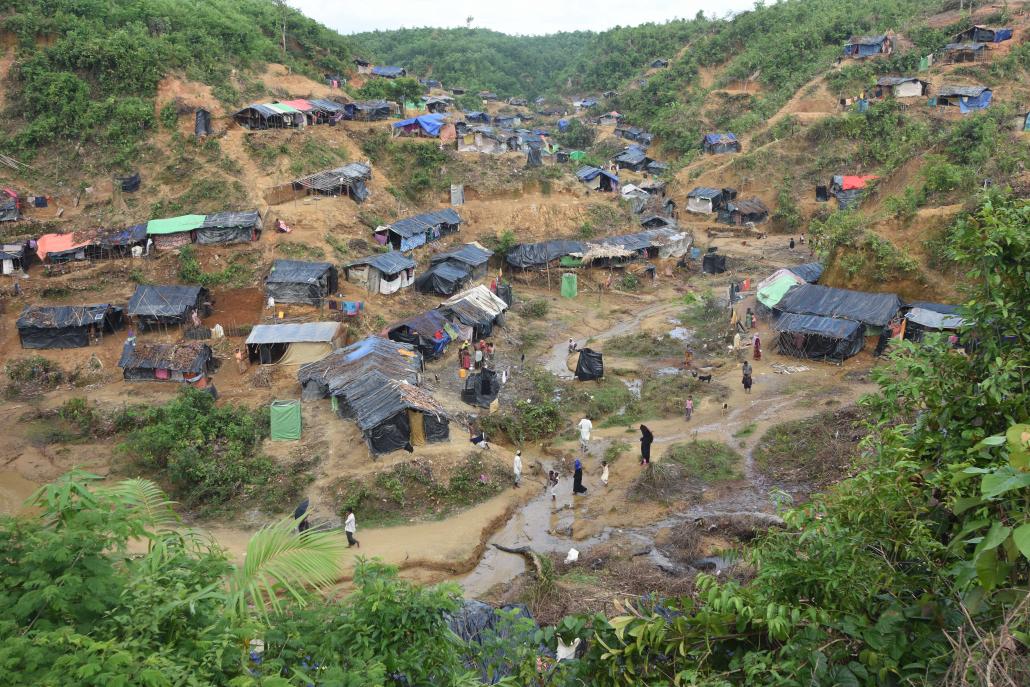 Frontier’s request to visit the area where the explosions occurred was denied on security grounds by members of the BGB.

“If something happens to you, who would take responsibility?” said one officer.

At a separate incident on the same day, at another “No Man’s Land” area close to the town of Gundum, about 50 kilometres south of Naikhongchari, a woman, Ma Shabekum Naher, lost both her legs after stepping on a mine close to the border fence.

Ko Furid Alam, a resident at the camp, which sits on a slither of land between the two countries and is controlled by the BGB, said the explosion happened hours after Tatmadaw soldiers came up to the border fence.

Furid Alam said the soldiers had walked down a hill that leads from the village of Taungbro to the border fence.

“We could see the military coming down the hill, and then sometimes they would sit down. We could see them sitting down, but couldn’t see what they were doing,” he told Frontier on September 24. “After they left, we went to try and find out what was happening and that was when we found the landmines.” 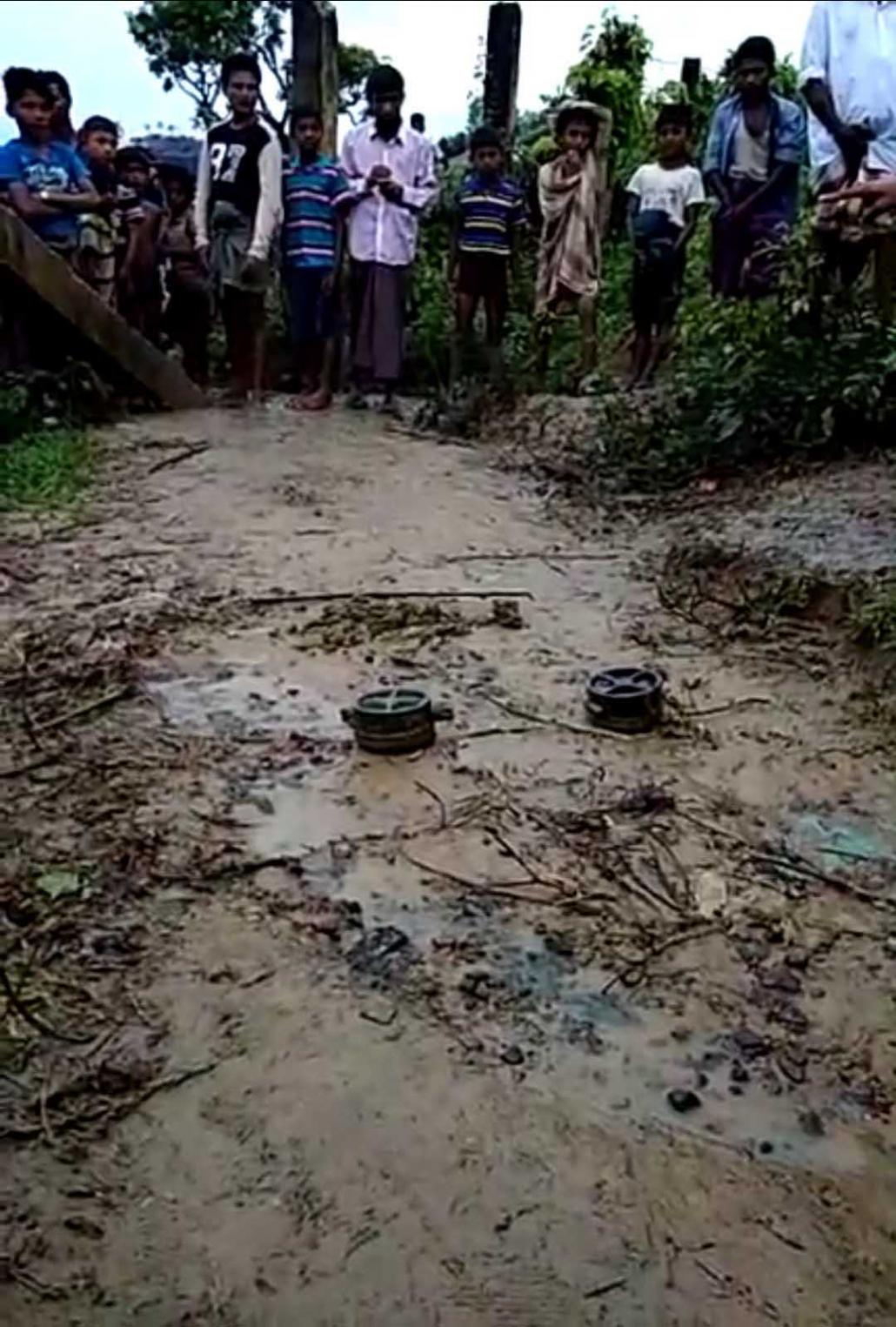 A screenshot from a video taken on a mobile phone of landmines laid near the Bangladeshi border. (Supplied)

He said shortly after, camp residents heard an explosion and later learned that Shabekun Naher had stepped on a landmine. He later sent Frontier a video apparently showing her being carried across a river, both her legs severed below the knee. In the video, people can be heard crying and shocked villagers watch as the woman is carried to the border.

Shabeku Naher’s brother-in-law, Ko Rohim Uddin, said the explosion occurred very close to the border. Camp residents later found three more landmines planted near the border fence and moved them to another area where there were no people.

“She has had an operation and is doing better, but we have to take care of her because she is now disabled,” he said.

Videos provided to Frontier showed camp residents clear a landmine that had been dug into the ground next to the border fence, and another appeared to show Tatmadaw soldiers boarding a truck near the border. Frontier was unable to identify the mine type in the photos and videos provided but they appeared to be manufactured rather than improvised explosive devices.

On September 23, Human Rights Watch issued a statement accusing Myanmar security forces of laying landmines near the Bangladeshi border. HRW said the devices were PMN-1 anti-personnel blast mines, but may have been copies of the original Soviet design produced by China or Myanmar. It urged the government to stop using antipersonnel landmines and join the 1997 Mine Ban Treaty.

“The dangers faced by thousands of Rohingya fleeing atrocities in Burma are deadly enough without adding landmines to the mix,” said Meenakshi Ganguli, HRW’s South Asia director. “The Burmese military needs to stop using these banned weapons, which kill and maim without distinction.”