Some progress made, but secession issue clouds peace talks

NAY PYI TAW — High-level peace talks attended by the government, Tatmadaw and armed ethnic groups that have signed the Nationwide Ceasefire Agreement have made some progress but failed to resolve differences over the issues of non-secession and forming a national army.

The summit in Nay Pyi Taw agreed to hold further talks on the two issues, which have emerged as major obstacles to the peace process launched by President U Thein Sein in 2011 and which State Counsellor Daw Aung San Suu Kyi has made a national priority.

The two-day summit began on October 15, the third anniversary of the signing of the NCA by eight ethnic armed groups. Another two groups signed the accord in February 2018.

A joint statement released by the government and the 10 NCA signatories after the talks said they had agreed on four points.

These were setting a timetable to discuss fundamental principles of democracy and a federal Union at the three 21st Century Panglong Union peace conferences due to be held by 2020, discussing the merits of top-down versus bottom-down decision-making among stakeholders, reviewing the framework for the political dialogue accompanying the peace process and striving to persuade all armed ethnic groups to sign the NCA.

However, the failure to make progress on the issue of non-secession left a shadow over the talks.

Leaders of ethnic armed groups at the talks expressed disappointment that they had not resolved the differences over non-secession and self-determination. They also expressed disappointment at the absence from most of the discussions of Tatmadaw Commander-in-Chief Senior General Min Aung Hlaing, who attended the opening session. Deputy Commander-in-Chief Vice Senior General Soe Win attended the talks on October 16.

The issue is extremely sensitive for the Tatmadaw and there was discussion at the talks about the need to find another term for “non-secession”.

Min Aung Hlaing told the opening session of the talks that “non-separation” had to be part of any agreement to emerge from the Union peace conferences.

Including “non-separation” in any such agreement would provide a long-term guarantee for peace, he said.

“We need to join hands together on the peace path with trust and without doubt,” the senior general said.

In her opening comments, Aung San Suu Kyi spoke of the importance of dealing with “the unresolved matter” of self-determination and non-secession.

She also stressed the government’s determination to establish a democratic federal Union as demanded by ethnic nationalities.

“During the second session of the 21st Century Panglong Conference, agreement was reached on the self-determination portion that was linked directly to the non-secession. But it was left aside,” the state counsellor said.

“Here non-secession is important. But also the will not to secede and to establish together a Union that need not be seceded from is also important,” she said.

Summit participant Padoh Saw Kwe Htoo Win, vice chairman of the Karen National Union, said ethnic armed groups wanted a federal democratic Union but the situation in the country was not in line with federal and democratic standards.

However, he welcomed the summit as a means of finding a way to discuss the non-secession issue, saying it was a step forward.

Government spokesperson U Zaw Htay said the comments made at the talks by the state counsellor and the deputy commander-in-chief showed that their concerns about the non-secession issue were similar.

“We want to resolve the non-secession issue. We need to find a way for the ethnic armed groups to guarantee they will not seek secession if they are granted the right to self-determination,” he said. 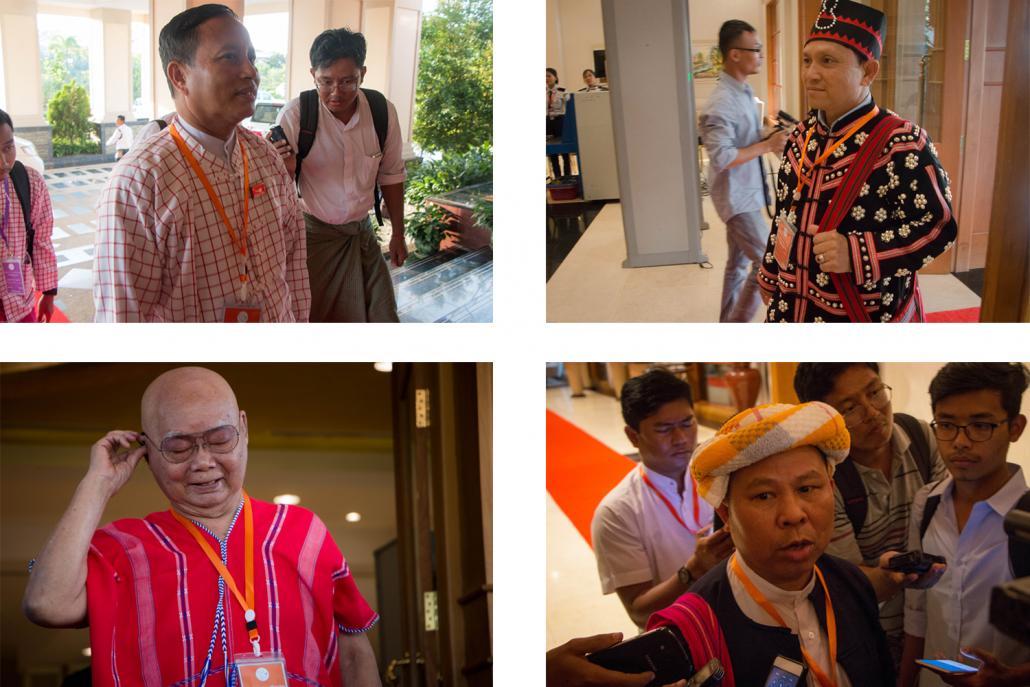 “We have discussed the non-secession issue but it doesn’t mean we want to secede,” he said.

At the meeting, participants agreed that the single army issue would be on the agenda at the next Panglong conference, which is likely to take place in the second half of November. Khun Myint Tun said discussions would focus on how to establish a single army in which all existing armed groups could participate.

In the meantime, ethnic armed groups – both signatories and non-signatories – plan to meet for a summit in the second week of November to discuss both non-secession and the single army. He said these were the two most “sensitive” issues for the peace process at present.

Political analyst U Maung Maung Soe told Frontier on October 16 that compromise offered a way forward on non-secession and self-determination.

“Compromises will be needed and the high-level talks provide an avenue to discuss these issues. I think the military has compromised on these issues,” he said.