Loved for generations for corralling the catch into fishermen’s nets, Irrawaddy dolphins are being killed in record numbers in recent years.

SIN KYUN, Mandalay Region — Tears fill Maung Lay’s eyes as he describes losing the dolphin he knew since his childhood, the latest casualty of a battle against pollution and electrofishing that may see the species disappear in Myanmar.

Loved for generations for corralling the catch into fishermen’s nets, the ‘smiling’ Irrawaddy dolphins are being killed in record numbers by rogue gangs who use car batteries to stun aquatic life.

The illegal technique now threatens to wipe out the dolphins and the tourist bonanza they promise.

Maung Lay’s dolphin, known as Thar Gyi Ma, was found washed up on the banks of the river in November. When locals cut her body open, they found she was pregnant.

“She is irreplaceable because she’s like my own parents. I’m heartbroken,” the 55-year-old told AFP inside his bamboo hut, in a small village a few hours by boat from Mandalay.

“I laid wreaths and flowers for her by the river.”

Irrawaddy dolphins can be found in rivers, lakes and seas across southern Asia, from the northwest Bay of Bengal, in India, to the south of Indonesia.

On this stretch of river in Myanmar the animals have developed a deep bond with local fishermen, who they work with in a generations-old partnership that has become the stuff of local folklore.

With careful choreography, locals call the animals using a throaty purr, splashing their oars and tapping on the side of the boat.

The dolphins signal they are ready to begin with a flick of a fin, before driving the fish towards the fishermen’s boats where they are scooped up by waiting nets.

Maung Lay said he had spent more than 30 years fishing with one group of seven dolphins, led by Thar Gyi Ma.

“I’m sorry for the great loss because she’s the leader of her group,” he said sorrowfully. “The others are not skilled like her.”

In neighbouring Laos, the Irrawaddy dolphin was declared “functionally extinct” by the World Wildlife Fund in October 2016 after just three individuals were counted during their latest survey.

“There is now little hope for a reversal of the situation,” the WWF said.

In Myanmar, officials say there only 62 Irrawaddy dolphin are thought to be left, after a record three were killed last year.

“We lost the highest number of dolphins (in 2016),” said Jaw Kar, the deputy head of Mandalay’s fishery department during a recent visit by AFP.

He blamed pollution from mining upriver in Kachin State, where chemical-heavy gold prospecting has boomed since the former military government stepped down in 2011.

Run-off from agricultural fertilizers is also thought to be poisoning the water.

But fishermen say the greatest danger comes from rogue gangs who are wiping out river life in their quest for easy money. 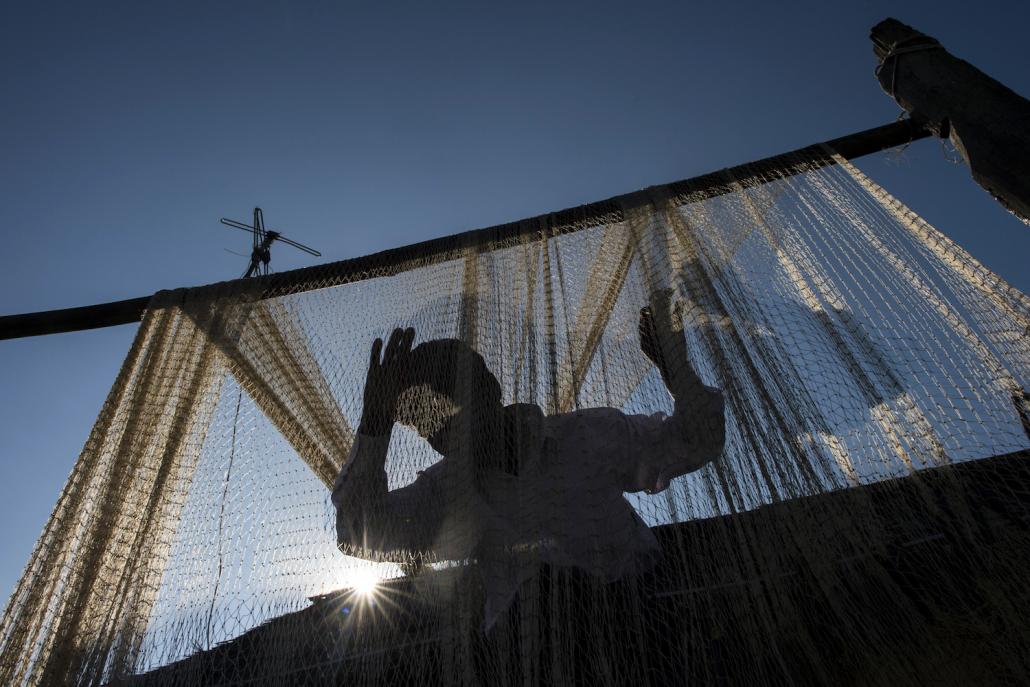 A fisherman cleaning his net near the Ayeyarwady River in Mandalay. (Ye Aung Thu / AFP)

Initially these electro-fishermen used small batteries attached to wire wound around bamboo poles to shock fish within a close radius, a cheap and effective way to bolster their catch.

Now locals say they have moved on to using car batteries, high-voltage transformers and trawling nets.

“Even a big buffalo couldn’t stand such an electric shock,” said fisherman Thein San Min, 26, who lives in another village on the river’s edge.

Electrofishing around Mandalay is punishable by up to three years in jail and a fine of 200,000 kyats (US$150), a small fortune for local villagers.

But conservationists say there is little they can do to stop the fishing gangs, who attack anyone daring to venture into their territory.

Villagers refused to take AFP to where the electro-fishermen live, citing safety concerns.

For Irrawaddy locals, losing the dolphins is not just about destroying traditions from their past — it threatens their future.

With fish stocks plummeting there are hopes ecotourism will prove a lifeline to bolster meagre incomes.

Visitor numbers have soared in the five years since the end of military rule and authorities are hoping to lure as many as 7.5 million people a year to Myanmar by 2019.

Wildlife Conservation Society ecotourism manager Thant Zin has set up a dolphin-watching programme to attract tourists, which he believes will incentivise locals to protect the animals and their habitat.

He is training villagers from a string of Irrawaddy villages in cooking, hospitality and environmentally responsible guiding.

“This is a very important business for the community,” he said.

But some fishermen fear the electrofishing gangs may already have destroyed the special bond that existed between man and beast.

“Dolphins in the Ayeyarwady river used to appear wherever we called them,” Thein San Min said.

“We worry because they won’t come close to us, although we coax them. It seems now we will have to watch them from far away.”