Myanmar’s first private detective agency plans to establish a national network of more than 300 employees and branches in six cities and insists it will complement the role of the country’s under-resourced police.

A GROUP of middle-aged entrepreneurs has responded to growing public concern over unsolved violent crimes that have put extra pressure on an overworked Myanmar Police Force.

The crimes include the brazen daylight holdup in Yangon’s Sanchaung Township on December 3 when two masked men robbed a money changer’s outlet at gunpoint and made their getaway on a bus. The police have not identified the suspects who remain at large.

Four months earlier Yangon was shocked by the mass killings of a retired police lieutenant, his wife and their sons aged eight and 13, fatally stabbed at their home in Yangon’s Mingaladon Township. Police have circulated an image of the three suspects they want to question over the case.

Citizens, residents and visitors have to rely on the MPF to solve criminal cases and catch the perpetrators but it is undermanned, under-resourced and overworked. The Deputy Minister for Home Affairs, Major-General Aung Soe, told the media last August that the international standard police to population ratio is 1 to 400 – in Myanmar it is 1:1,200.

Frontier didn’t waste time arranging an interview. Asked on February 3 how many cases the agency had on its books, First Myanmar managing director U Htay Nyunt, 61, smiled and said, “Three”.

Two of the cases involved spouses who suspected their partner was having an affair and the other was about a missing child, he said. 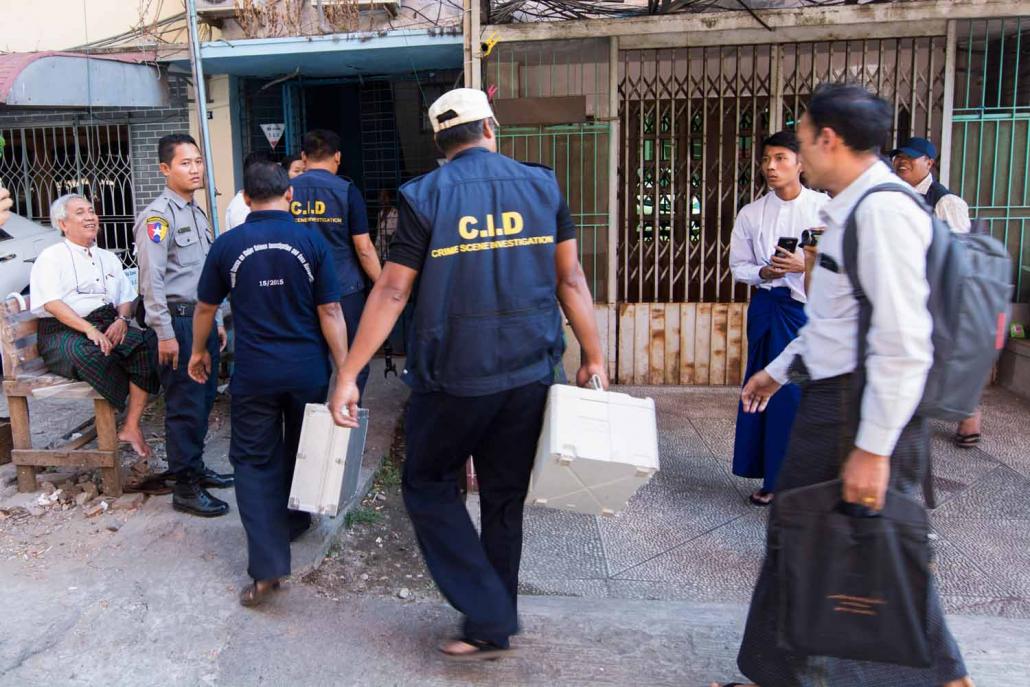 A number of former Criminal Investigation Department staff are on the payroll at First Myanmar, together with other retired military and police officers. (Teza Hlaing | Frontier)

Three cases on the books a day after launching the business might suggest lucrative times ahead for the agency but Htay Nyunt said making a profit was not his first priority.

“We are going to help poor people as much as possible by not charging them,” he said. “We want to help people because we think it is important to have an agency like ours in a democratic country.”

Some famous sleuths in Myanmar crime fiction have made the public familiar with detectives and their work. The best known are “Detective San Shar”, who featured in many of the novels written by the prolific Shwe U Daung between 1917 and 1961 and was inspired by the Sherlock Holmes stories of Arthur Conan Doyle, and “Surveillance Hnin Maung”, sometimes called “Inspector Hnin Maung”, a character created by Min Thein Kha, whose crime fiction was popular between the early 1990s and the late noughties.

Htay Myint is part of an impressive team. He says the country’s first private detective agency has 10 co-founders, including himself, and a total of about 30 staff.

Most of the co-founders are retired police or military officers, including from the Criminal Investigation Department and military intelligence, he said. Htay Nyunt said he was a retired deputy director but declined to say in which government department.

About five percent of the staff are young people with advanced IT skills and there is also an advisory team of lawyers to help with legal matters, said Htay Nyunt, who declined to give any further details about the agency’s team and asked that its address not be publicised. 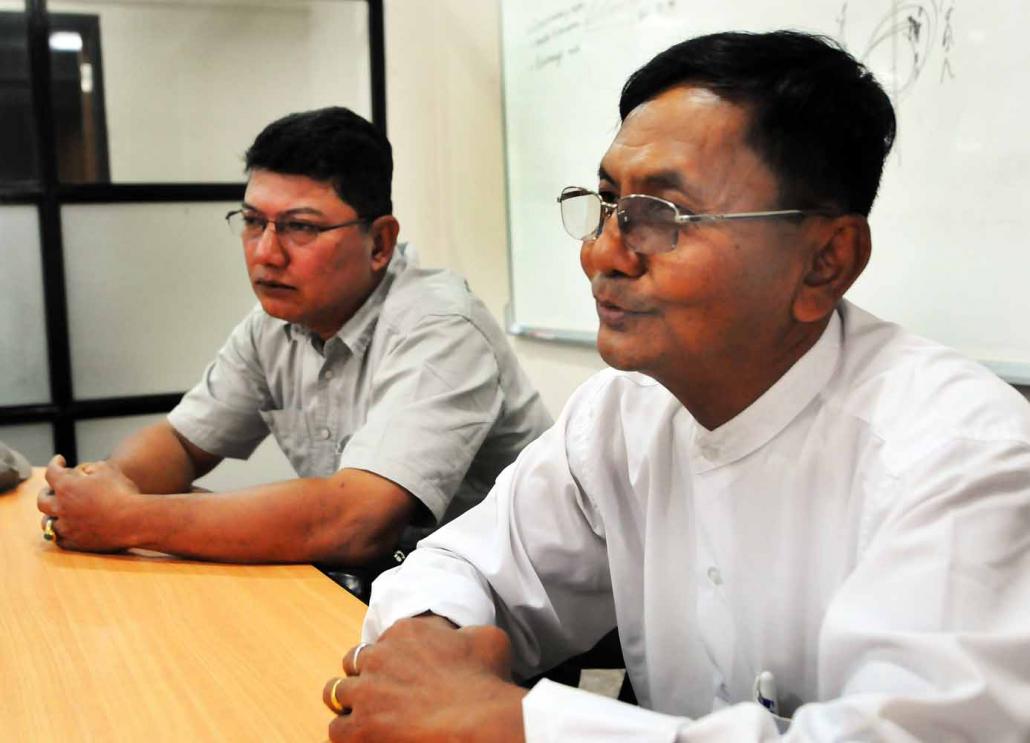 U Htay Nyunt, the managing director of First Myanmar private detective agency, together with U Khaing Soe, who leads its investigations in Yangon Region. (Steve Tickner | Frontier)

There seems to be strong interest in joining the agency. Htay Nyunt received two calls from prospective employees during his interview with Frontier.

The agency will accept any investigation sought by clients, he said. Its ad said its services include tracking down perpetrators of crimes, finding missing people and recovering lost evidence.

Htay Nyunt said there are no fixed fees and that investigations are charged on a case-by-case basis but the agency does charge a consulting fee of about K10,000, roughly the same as a consultation with a lawyer.

He acknowledged that the agency faced a legal hurdle because there was no law permitting such work but was confident his team could reach a compromise with the authorities because the co-founders were retired, high-ranking officials “and they speak the same language”.

Another obstacle might be more challenging. It is widely believed that some criminal cases are not properly investigated because they involve or were instigated by members of powerful families.

One such case was the execution-style murder of the daughter of a prominent Mogok gem mining family, her husband, their two daughters and a maid, in their mansion off Yangon’s Inya Road in March 2008. Each of the victims was killed with a shot to the head. The killings have never been solved.

Htay Nyunt is aware of the risks involved in such cases and is ready to confront them.

“Yes, we might be threatened; it’s something we have to expect from our work. But we all also know that we have to be brave,” he said.

Asked about the Inya Road murders, he said: “If a client asked, we would investigate it.”

U Khaing Soe, the agency’s in-charge responsible for Yangon Region’s southern district, said it would have an advantage over the police because it was better resourced.

“Most police officers are burdened by the number of cases they have to investigate. They cannot take care of every case so they focus on the easy cases that interest them.  But we will be able to focus on every case because we have enough human resources,” Khaing Soe said.

He said the agency planned to recruit 300 staff for its Yangon Region operations as part of plans to expand the business.

There were plans to open branch offices at Mandalay and Mawlamyine, Mon State, as well as in Ayeyarwady and Magway regions and Shan State “as soon as possible,” Khaing Soe said.

Htay Nyunt said the agency’s investigation strategy would include establishing informal information gathering networks with taxi and trishaw drivers and others at the grassroots.

He said any information provided by suspects in criminal cases would be given to the police, with whom the agency intended to cooperate.

Htay Nyunt and Khaing Soe said they hoped that the MPF would regard the agency as complementing rather than disturbing its work.

Yangon Region Police Department declined four requests from Frontier to comment on the formation of the agency.

Htay Nyunt said he was prepared for the agency to come under scrutiny from the police.

Police Lieutenant Colonel Tin Win from the Myanmar Police Force said the agency will have to apply to the relevant department that can give them permission to operate.

“But I don’t know which department is responsible for this area,” he said.

UPDATE FEBRUARY 24, 2017: This article was published in the February 16 edition of Frontier. In the time since, the Ministry of Home Affairs has announced that First Myanmar had not established itself lawfully, and an investigation would be opened into the agency. No further details have been forthcoming. TOP PHOTO: Theint Mon Soe — J | Frontier