Weeks of fighting between the Tatmadaw and the Shan State Army-North has displaced thousands of villagers, and many of them do not understand the reason for the conflict.

“We are used to hearing the sound of fighting, but this is the first time in my life that I have become a refugee,” said U Lon Kyauk Lu, 49, one of the thousands of villagers forced from their homes by recent fighting between the Shan State Army-North and the Tatmadaw.

Speaking in heavily-accented Burmese at a temporary refugee camp at Lai Hka, U Lon Kyauk Lu said he and his family were the last to flee their village of Wun Sot, near the brigade headquarters of the SSA-N at Wun Hai in central Shan State. Wun Sot is one of the villages at the epicentre of weeks of heavy fighting between the two sides.

U Lon Kyauk Lu left Wun Sot with his wife, two sisters, two children and his aunt, who is blind, on November 16 after the fighting escalated.

The Tatmadaw had carried out airstrikes and artillery attacks on Wun Sot and nearby villages, he said.

The fighting began on October 6 and has been centred on Mongnawng Sub-Township, about 180 kilometres east of the Shan State capital, Taunggyi. The Union Election Commission postponed voting in the November 8 election in the surrounding townships because of the fighting. 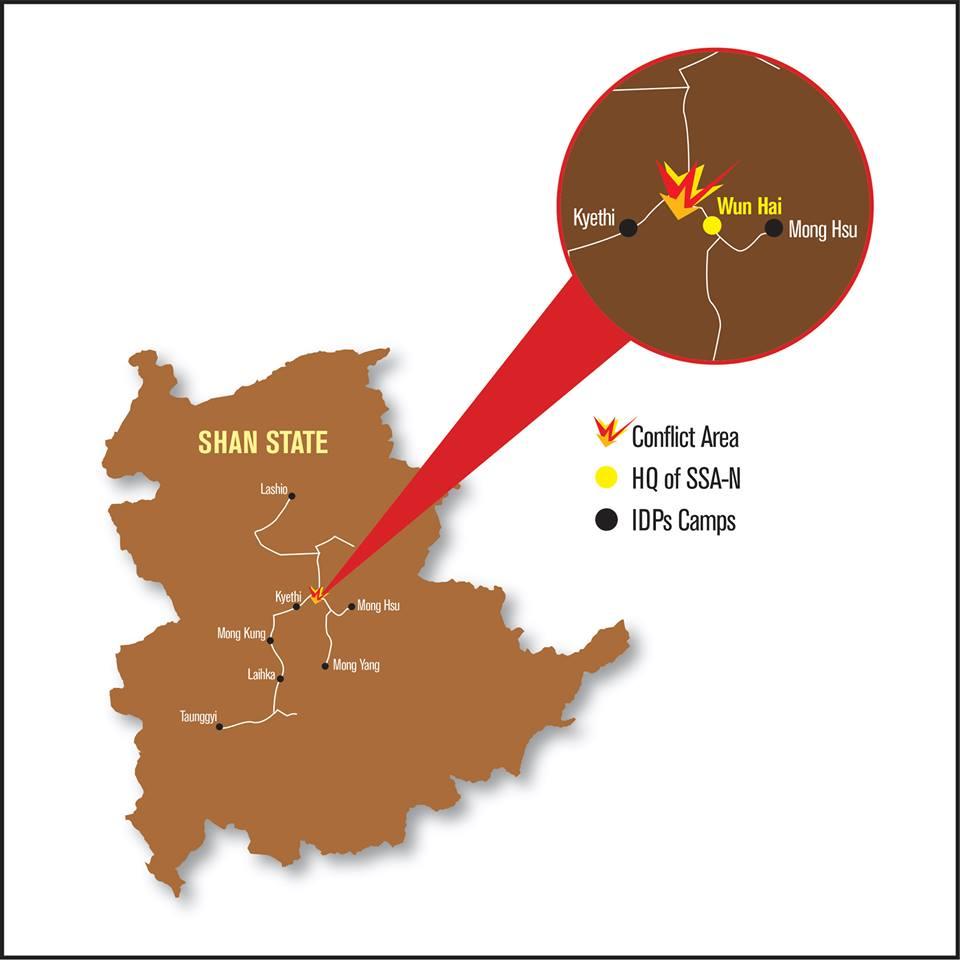 A map of the SSA-N/Tatmadaw conflict that began in October 2015. Frontier

The fighting escalated in mid-November, a month after the SSA-N, along with the other main ethnic armed groups in northern Myanmar, the United Wa State Army and the Kachin Independence Army, did not sign the “national” ceasefire agreement. The biggest of the eight armed ethnic groups that signed the ceasefire accord with the government in Nay Pyi Taw on October 15 are from eastern Myanmar.

Unless the fighting ends soon – a temporary truce took effect on November 20 ahead of planned talks in Nay Pyi Taw between a SSA-N major and President U Thein Sein – thousands of people face the prospect of living in temporary refugee camps during the winter, when overnight temperatures can fall below freezing. The villagers say they do not understand what caused the fighting, which began after the SSA-N said it would not sign the national ceasefire agreement.

“We were doing our daily routine of finding firewood and we don’t know why they started fighting, exactly. We know only how to earn money for our children,” U San Tha, 57, a shopkeeper, told Frontier at the Lai Hka temporary refugee camp.

U San Tha, who was born and raised in Mongnawng Township, said he had been hearing rifle and artillery fire since October 26. He said the fighting intensified after election day on November 8, forcing he and his family to shelter at night in a bunker built under their shop. The family fled to Lai Hka on November 10.

“I saw a few people wearing guerrilla uniforms walking around town during those days, but I didn’t know whether they were soldiers from the Shan Army or Myanmar Army. I’m only sure that they were speaking Burmese,” U San Tha said.

The evacuees said they saw columns of Tatmadaw marching towards Mongnawng Township on November 10. The uniformed members of armed groups who had been in the town left it before the fighting began, they said.

“They (Tatmadaw) were shooting into the town when there were no armed groups there,” U San Tha said. “Innocent people were killed; I don’t know why they are shooting civilians,” he said.

The evacuees have sought refuge at temporary camps in townships throughout central and northern Shan. The larger camps are at Lai Hka, Monghsu, Taunggyi and Lashio and there are smaller numbers of internally displaced people being sheltered at villages, such as Wun Lwet, near Monghsu.

Aid organisation Relief International and other philanthropic groups have been providing assistance to those displaced by the fighting since November 10. There are indications that many villagers are putting their lives at risk by delaying decisions to flee to safety.

“Firstly, the rich people could go to the cities but we couldn’t because it requires money to move to big cities like Taunggyi and Lashio, so a lot of people are still hiding in fighting in villagers near where fighting is continuing,” said U Lon Kyauk Lu.

The fighting resulted in the closure of all government schools in Mongnawng Township on November 10. Among those displaced by the fighting were more than 1,000 students.

A teacher at a government school who requested anonymity said there was sporadic shooting around the township early this month until November 7, when parents were told there would be classes as usual the following Monday, November 9.

“But the fighting became heavier the night before election day and I fled the town with 15 relatives, most of whom are children,” the teacher, 41, said.

“I am used to the sound of gunfire and artillery, but I was afraid of the helicopters, which I had never seen before,” she said. The Tatmadaw had deployed at least one helicopter gunship in the area, media reports said. 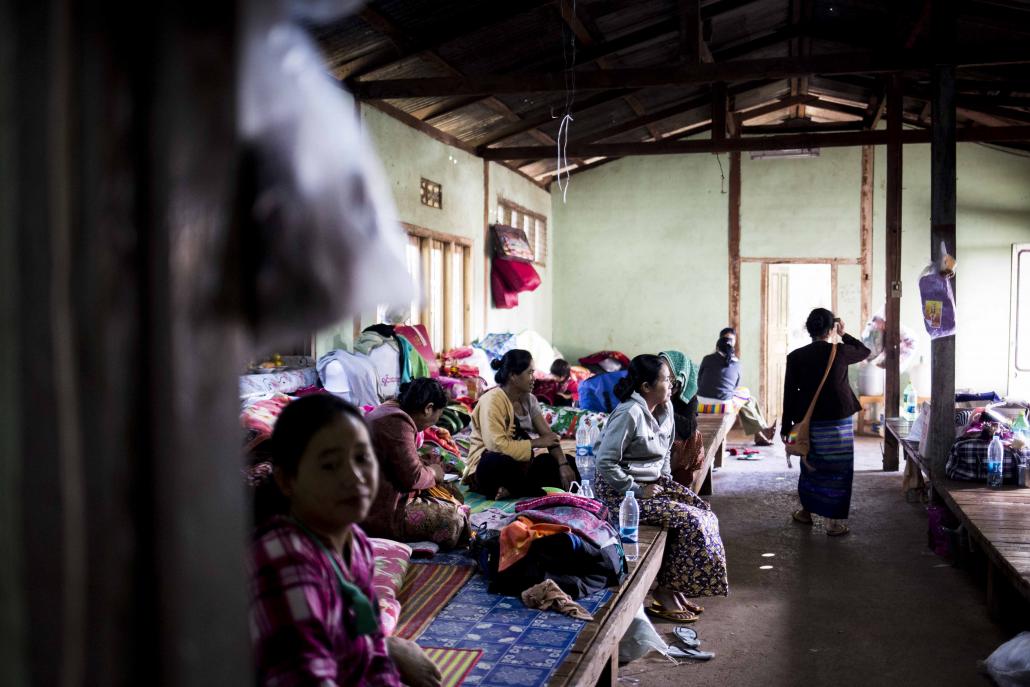 “They were shooting into the town when there were no armed groups there. Innocent people were killed. I don’t know why they are shooting civilians.”

Neither the Union nor Shan State governments had released casualty figures from the fighting late last week, but information obtained by Frontier from civil society groups and refugee camp administrators indicates that five people were killed and at least 300 injured.

Residents who fled Mongnawng said the dead included a Tatmadaw officer killed by mistake in an artillery attack by government forces.

The incident that claimed the life of Major Hein Thu, 33, and two civilian friends, had occurred at night while Mongnawng was under a curfew imposed by the Tatmadaw, they said.

Despite the curfew, a funeral attended by relatives of the deceased carrying torches was taking place as the major and his friends were meeting nearby.

“I think the Tatmadaw on the hill near Mongnawng Township saw the torch light so they shelled the funeral house but missed and hit the house where they major was staying,” the Venerable U Ojeya, 50, told Frontier at the Lai Hka camp. “He was killed on the spot,” said U Ojeya, abbot of one of the biggest monasteries in Mongnawng.

On the following days, November 15 and 16, the Tatmadaw launched more airstrikes in the Mongnawng area. U Ojeya said a five-year-old girl was killed in a bombing raid while fleeing with her family to the camp at Lai Hka. “A 60-year-old woman died from shock the same day,” he said.

A 15-year-old man was reported to have been killed by gunfire while returning home from harvesting rice on November 11 and a woman aged 55 was wounded in the chest by shrapnel from an explosion.

At a military hospital at Aungban in Kalaw Township, Frontier met Maung Sai Khan Pan, who was recovering from a gunshot wound to the neck. Relatives visiting him in hospital declined to say how he had sustained the injury.

MP U Sai Kyaw Zaya from Lai Hka, the nearest township to the conflict area around Mongnawng, is doing what he can to help the villagers sheltering at temporary camps but is encountering some challenges.

He quoted township municipal officers as saying they were still waiting to receive assistance from the regional government, including tanker trucks to empty the septic tanks at monasteries serving as temporary shelters.

“It’s been a week and there’s been no assistance from them [the regional government],” the parliamentarian told Frontier at Lai Hka monastery on November 17.

Peace talks are in the air. On November 22 an SSA-N delegation left their headquarters in Wun Hai for Nay Pyi Taw, and met informally with Union Peacemaking Working Committee at the Yangon Myanmar Peace Center the next day.