The surprise attacks launched by four armed groups in Shan State last month were a response to months of relentless pressure from the Tatmadaw.

U Aung Kyaw Zaw rules out the possibility of involvement by China in the fighting that erupted in northern Shan State last month.

“China wants Myanmar to be peaceful,” he told Frontier, and he is probably more qualified than others to comment. 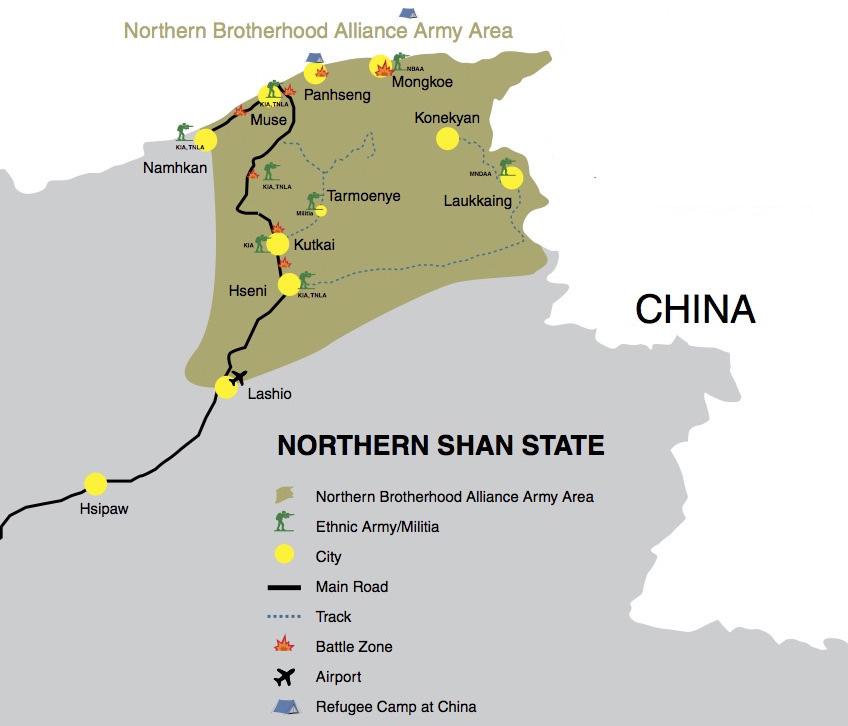 Aung Kyaw Zaw has lived in exile in China since the break-up in 1989 of the Communist Party of Burma, in which he was a high-level member. He is the son of Bo Kyaw Zaw, a member of the Thirty Comrades who was dismissed as an officer from the Tatmadaw in 1957 and later became a central committee member of the CPB.

The four groups that launched the attacks early on November 20 – the Kachin Independence Army and its Northern Brotherhood allies, the Myanmar National Democratic Alliance Army, Ta’ang National Liberation Army and Arakan Army – had the advantage of the element of surprise.

The attacks, at the border town of Muse and the nearby 105-mile trade zone, and Kutkai, Panhseng and Mongkoe, caught the Tatmadaw at an unguarded moment.

In a statement issued on November 21, the alliance said the coordinated attacks were in retaliation for Tatmadaw operations in ethnic areas that included the use of heavy artillery against civilians and “arresting, torturing and killing indigenous people”.

The joint military operation was an inevitable response to “constant military pressure” from the Tatmadaw, said the statement, which warned residents of the affected area to avoid travel.

The Tatmadaw was unable to respond immediately to the attacks because they were unexpected. Its first operation launched on November 21 was aimed to re-opening the highway between Muse and Lashio. Disrupting traffic on the main highway to the border with China was a strategic priority of the alliance and its attacks included bombing incidents at two bridges.

The area where the attacks occurred is under the Tatmadaw’s North Eastern Regional Military Command. The security situation there is complicated by the presence of more than 25 pro-government militia groups, as well as ethnic armed groups.

On November 23, Muse Township administrative officials distributed a statement at the 105-mile trade zone about 10 kilometres out of the town, that urged the area’s residents to live together peacefully and advised them not to believe rumours on social media about the attacks.

“We’re cooperating with the Tatmadaw and people’s militias for security,” the statement said. The militias are familiar with the residents in the areas where they operate and also have a better knowledge of the terrain.

After the November 20 attacks, North Eastern Command deployed troops, mainly infantry, to provide security in some sensitive villages inhabited by Kachin and Ta’ang (Palaung) where there were sporadic clashes until November 29. Infantry troops said the highway between Lashio and Muse was secured on November 27, after deliberate attempts by the alliance to disrupt traffic. Two truck drivers were shot dead, one by a sniper; three vehicles, including a bus, were set on fire near Natphetlon village tract; and cars, pick-ups and small trucks were abandoned at the roadside.

Clashes occurred until November 29 at Tarlon and Mawtaung, the last village tracts on the highway before the 105-mile trade zone and Muse.

The heaviest fighting occurred at the towns of Panhseng and Mongkoe, which border China to the west of the sensitive Kokang region, where the Tatmadaw took months to repel an offensive launched by the MNDAA early last year.

Nearly all of Light Infantry Division (33) from Sagaing and some troops from LID (99) from Meiktila, who had been involved in last year’s operation in Kokang, were deployed to the battle zone at Mongkoe, where alliance attacks on November 20 left nine police dead and three missing.

Mongkoe, which is difficult to reach on the Myanmar side because of bad roads but can be accessed via the Chinese border town of Manghai, was under alliance control until early this month. Fighting escalated there after the Tatmadaw launched air strikes on November 29, the alliance said in a Facebook post.

The air strikes may have been the biggest by the Tatmadaw in decades. Tatmadaw sources said they involved the use of Russian-made Mi-35 helicopter gunships, Chinese-made A-5 and F-7 fighter jets, K-8 light attack planes and Mi-17 transport helicopters.

The fighting at Mongkoe over strategic positions has been the fiercest since the alliance launched the attacks. The airstrikes were said to have continued until December 4, when the alliance issued a statement calling on the Tatmadaw to announce a national ceasefire and withdraw its troops from ethnic territory. They also asked the Chinese government to “negotiate and mediate” an end to the conflict.

The alliance also said it was withdrawing its fighters from Mongkoe to prevent further loss of life and damage to property from the airstrikes.

In a statement on November 20, China had warned about stray bullets from the fighting falling on its territory and said it was taking the necessary measures to “resolutely safeguard national sovereignty” and the security, lives and property of its people.

On November 26, the alliance thanked China for the assistance it provided to the hundreds of civilians who fled across the border to escape the fighting. The alliance has only begun to refer to China by name since the fighting began.

It is no coincidence that the four alliance members are not signatories of the October 2015 Nationwide Ceasefire Agreement and that their surprise attacks have come ahead of the next Union Peace Conference, due to be held in February.

The Tatmadaw has been relentless in applying pressure on the four groups since the NCA was signed.

The pressure was raised a notch on December 7 when the Shan State regional assembly voted to declare the four groups as “terrorist organisations”, a move criticised by some as being counterproductive to the objectives of the peace process.