A tentative start is being made in Myanmar to teach children about sexual and reproductive health but overcoming entrenched conservative attitudes is a challenge.

At the end of a day learning about sex, Dr Ne Win’s students show how they feel by placing stickers on a daily “mood meter”.

At the Myanmar Medical Association’s three-day workshop, they play games and sing songs to learn about topics like teenage pregnancy and HIV, and then break into small clusters of boys or girls who sit in a circle on the carpet and practice slipping condoms onto a wooden dowel.

“When we talk about ‘my body’ we don’t start with presentations. We have card games,” Ne Win said.

The workshop, in other words, is carefully designed to make the learning experience for its students as comfortable as possible in a society that would rather talk about anything else but sex.

At an institutional level, Myanmar is doing relatively well on education and resources for sexual and reproductive health. The National League for Democracy government has set up public youth information and resource centres in rural areas and works with NGOs for further support. The adolescent fertility rate was only 17 births per 1,000 in 2015, show World Bank figures. In Thailand, by contrast, it was 45:1,000.

Despite the low number of adolescent births, knowledge of sex is a mire of rumours and half-truths in classrooms, teashops and on family farms across Myanmar.

Assessments by the United Nations Population Fund found that many young people lack basic understanding of menstruation or how contraceptives work. Young people were aware of HIV, the virus that causes AIDS, but had little knowledge of other sexually transmitted infections.

“If you ask [teens], ‘Do you know about emergency contraceptive pills?’ they say ‘yes.’ ‘Do you have friends who have used it?’ They say, ‘yes.’ But they are thinking you have to use one dose whenever you have sex. So if you have sex three times, they use three doses in one day,” said Dr Sithu Swe of the UNFPA’s Youth Development Programme.

UNFPA’s Youth Development Programme has conducted training sessions in rural and urban communities for eight years, but the effort has had the social and political decks stacked against it. Under the old regime, the government was reluctant to gather young people together.

The authorities are now more willing to allow training, but community leaders and parents insist on sitting in.

“Young people cannot ask the questions if adults or young people are sitting beside them,” said Sithu Swe.

As for demonstrating condom use: “When we do that, sometimes the parents, adults, guardians, say: ‘You guys try to teach my children dirty things!’ They tell us to get out. We run away.”

Ma Aye Hla Yi began as a participant at Ne Win’s Myanmar Medical Association workshop and now works as a staff trainer. “Sometimes what we hear from even the married women, they don’t know. They just have sex, get a baby,” she said.

Many parents do not want their children to be ignorant about sexual issues but are too embarrassed to discuss them, said Aye Hla Yi. MMA workshops have a waiting list of about 200 young people, many sent by parents eager for their children to learn but afraid of losing respect if they discuss sex themselves.

Before she attended Ne Win’s training, almost everything she knew –from menstruation to birth control – she learned from friends or older peers, never her parents.

When teaching other girls: “At first they are shy to see the body parts, especially for the genitals, but after a while they are satisfied because they haven’t obtained this information within the family.”

Even medical professionals are reluctant to discuss sex education, Ne Win said. The Myanmar Medical Association training program started with the children of its members. “It is very difficult in our culture,” he said. “Sometimes they feel that if they talk about sex in front of their children, their respect will be gone.”

What remains is an informal network of friends and, recently, the internet, which the MMA’s Youth Development Centre works to tap. It maintains two sexual and reproductive health hotlines, a “pink line” for girls and “white line” for boys, and staff and volunteers (who begin as students) head off-site for peer-to-peer training in schools, teashops, malls and anywhere else young people gather.

Outside Yangon, the Ministry of Social Welfare, Relief and Resettlement, along with UNFPA and a handful of NGOs, holds training events for both adolescents and adults in rural communities. In the Samalauk Youth Information Corner in Ayeyarwady Region, for example, villagers arrive on boats to attend training sessions, ask questions and seek resources.

Nevertheless, Sithu Swe said, “We don’t have a standard guideline for the sexual education. Different organisations have different models they are using.”

A national sexual and reproductive policy is still in its infancy. Although the UNFPA and NGOs follow guidelines approved at the 1994 International Conference on Population Development in Cairo, Sithu Swe said they cannot be used “directly” in Myanmar. “We are a culturally sensitive country. We need to tailor guidelines specifically to Myanmar,” he said.

Even at the highest level, progress in teaching sexual and reproductive health is encountering a culture that would rather look the other way.

The Ministry of Education has made a start on sex education in public schools within a “Life Skills” curriculum developed by the UN children’s agency, UNICEF, but it is extra-curricular.

“There is no need to [study it] for the exam, so teachers don’t concentrate on that. Most of the teachers are women, so they are reluctant to talk about sexual health issues among their students,” Sithu Swe said.

On the government side, winning over conservative officials to the need for a sexual health education curriculum and programs has always been an uphill battle, although Sithu Swe said it had become easier under the NLD government.

A volunteer at the Myanmar Medical Association. (Maro Verli / Frontier)

The policy must be broad because sexual and reproductive health is a broad issue. It goes beyond knowing how to use condoms.

“Whenever we say ‘sexual and reproductive health education’, it’s not only about sexual matters,” Sithu Swe said. “It’s also about life skills. Decision-making. Peer pressure. Her boyfriend is persuading her to go to the guesthouse to have sex. At some point the young girl has to decide if she will follow him or not. If she has no decision-making skills, she will follow him, have sex, maybe get pregnant,” he said.

As Ne Win put it: “Even with one decision, their life can change.” 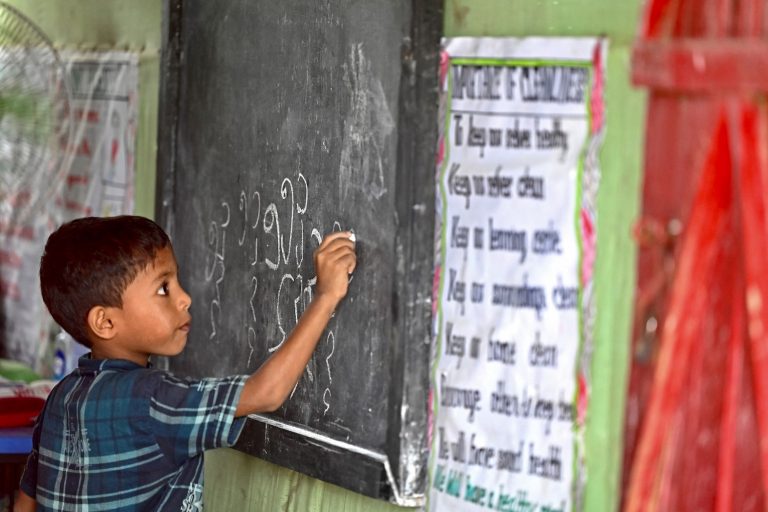 Bangladesh has finally allowed more schooling for Rohingya refugee children, but still insists on using the Myanmar curriculum in the hope that they will one day return – a hope many Rohingya share, but which looks increasingly out of reach.
BY Frontier