Sending the wrong message on sex and reproductive health

Misinformation in a social media video about unwanted pregnancies has highlighted the need for women to receive accurate, impartial information about family planning and access to reproductive health services.

DON’T DO that! No, I mean it. Really. A video called “Don’t do that”, which has been circulating recently on Myanmar social media attempts to shame and frighten young women with misinformation about unplanned pregnancies and abortions, is extremely damaging.

The short film, sponsored by a popular domestic soft drinks company and produced by Myanmar Media 7 news, follows the story of a young woman. It shows her dancing at a nightclub and then having dates with various men before she becomes pregnant.

If it is meant to be educational, it fails miserably.

The cause of her unplanned pregnancy is merely hinted at. Did it happen when she was seductively sipping juice in the swimming pool? Was it the moment she travelled through Yangon at night with her head protruding from a car’s sunroof? Or was it – as is strongly implied – simply the consequence of being a young woman failing to follow restrictive societal conventions.

But if the “slut-shaming” message of the video is abhorrent in itself (the men in it are not subject to the same judgements), its depiction of the abortion becomes a horror show. Confusing the differences between a medical termination (by taking a pill) and one involving surgery, it ends with the young woman in agony – physical and mental – after being forced to look at the aborted foetus.

Tragically, the reality for women in countries such as Myanmar where abortion is illegal is that those who terminate a pregnancy too often suffer unnecessary, and sometimes fatal, physical and mental trauma that could have been avoided had proper medical services been available to them.

If the moral debate around abortion remains divisive in many parts of the world, the right of women to receive accurate, impartial information and access to family planning and reproductive health services is something that should always be protected.

Yet, early this month the United States government announced that it was halting funding for the United Nations Population Fund (UNFPA), which has been instrumental in providing family planning and maternal health services to women throughout the world and preventing maternal mortality. In other words, UNFPA’s work directly focuses on saving the lives of women and babies.

The cut came after President Donald Trump earlier this year reinstated a ban on US funding for any international organisation that provided any kind of abortion service or advice. 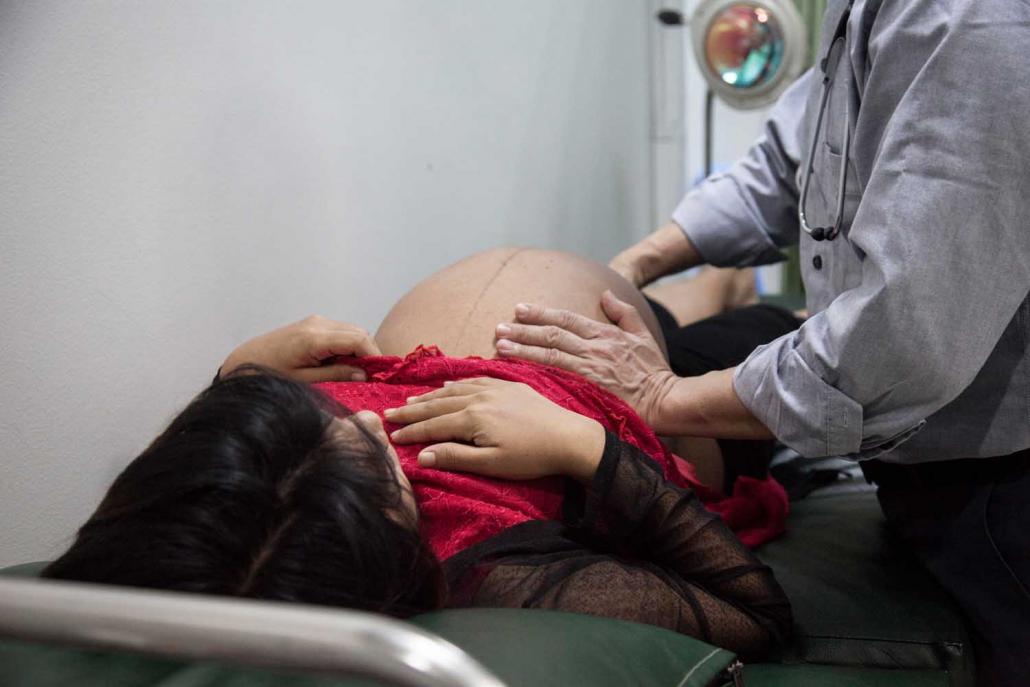 A pregnant lady gets an examination from a doctor at a specialist clinic in Yangon. (Theint Mon Soe — J | Frontier)

The US is not the only country failing to support women’s reproductive health services at previous levels. Last year Denmark also announced a significant reduction in funding to UNFPA. As donors throughout the world increasingly focus attention on the global refugee crisis, it is feared vital women’s services will lose out – an irony being that displaced women are in particular need of such support.

If anything positive emerged from the “Don’t do that” video, it was the number of Facebook responses from women who objected to its sexism and erroneous information.

“Instead of this story, why don’t you do a story about birth control choices for women and men. Also educate about STDs [sexually transmitted diseases]. This is not convincing me about staying against abortion at all,” wrote one woman.

Another responded, “So much misinformation here! Not all club-going, rich, social girls end up getting knocked-up. (In fact, it’s the poor, uneducated girls who mostly suffer from unwanted pregnancies.) ALSO, taking abortion pills is different from yanking a foetus out. ALSO, since it’s supposed to be ‘educational’, do inform the public about many options such as use of contraceptives, taking morning-after pills, etc, to prevent unwanted pregnancy.”

It is extremely encouraging to see young women standing up for themselves and others and, even though the issue is controversial and potentially emotive, defending their right to receive accurate information free from gender-based discrimination and prejudice.

Yet even among these strong and enlightened young women there were clear gaps in their knowledge of reproductive health options.

One respondent, who made it clear she was aware of emergency contraception and how it works, nevertheless “doubt[ed] you can also abort a baby simply with a pill”.

Another highlighted the discrimination and challenges young women face when it comes to discussing sexuality, and said she believed the reputation of the actress in the video had been ruined by playing the role.

“I am a virgin but I know everyone is using a condom for one night stands. Also, the way you presented [the video] completely destroyed the girl’s career,” she wrote.

The tendency to oppress women’s self expression and freedoms rather than deal with deeper societal problems, permeates much of society in Myanmar.

It was evident when Yangon Region Chief Minister U Phyo Min Thein announced a crackdown on alcohol consumption near Thingyan pandals this year.

“We are ending the situation whereby parents are horrified to see their daughters on the pandals,” he said.

His comments may well reflect traditional cultural values that prioritise the sensibilities of parents over those of their children, but they also exhibit an inherent sexism.

By ignoring the common reports of groping and sexual assaults by male revelers during the festival, and focusing instead on the behaviour of young women whose only “offence” is to be seen enjoying themselves in public, it promotes the idea that “saving face” is more important than defending women’s rights.

This is the kind of attitude that leads to women keeping domestic abuse secret, to sexual assaults going unreported, and to the practice in some communities of women who have been raped being forced to marry their rapist to “protect their family’s honour”.

In previous years, Yangon authorities have demanded that shops clear their shelves of condoms during Thingyan in an ill-advised attempt to control “morality” by depriving people of contraceptives.

The responses to the “Don’t do that” video show that young women want access to the information and services that will allow them to protect themselves and make their own decisions about contraception and how they live their lives.

Politics, religion and policing in this country, as in much of the world, are overwhelmingly dominated by older men, most of whom appear to show little inclination to take the concerns and demands of young women seriously.

All the more important then that funding continues for organisations, international and national, that can provide women with accurate and impartial family planning information and reproductive health services.

Those who support women’s rights everywhere must work to ensure the needs and demands of young women are met and to end the situation in which decisions about women’s health are made by roomfuls of men, whether in Washington or Nay Pyi Taw. 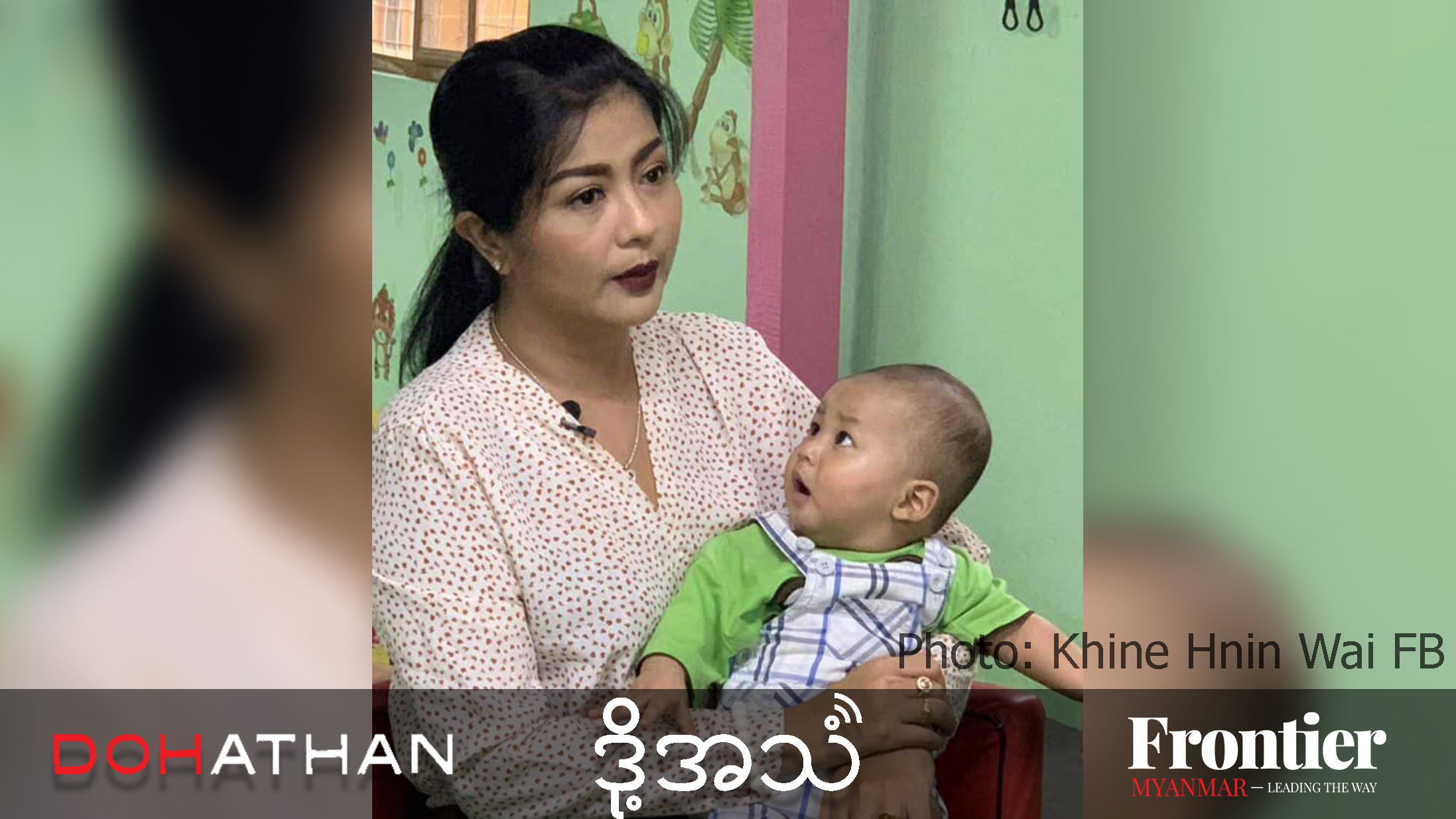