The 225-megawatt Myingyan power plant has been described as a landmark project for Myanmar’s power sector and a model for future development, but not everyone’s convinced.

AS HE unveils a plaque at the gas-fired Myingyan power plant together with a visiting Singaporean official, Minister for Electricity and Energy U Win Khaing outlines the electricity challenge facing the National League for Democracy government.

Power demand is increasing by 19 percent each year. The country needs to add around 500 megawatts of installed generating capacity annually to keep up. It is aiming to achieve full electrification by 2030. By November of this year, half of the country’s 10 million households are expected to be connected to the national grid, up from 43 percent at present.

To meet this growing demand, the government hopes to have four new gas-fired plants with a total installed capacity of 3,000 megwatts online in three years, Win Khaing said, referring to a series of projects that he first announced in January 2018.

“But to address the problem of meeting demand in the short term, we can implement similar projects to this gas-fired power plant,” the minister said at the official opening ceremony for the plant on March 16.

Within the industry, there is a widespread belief that most, if not all of the four projects announced in January 2018 are likely to be delayed – if they are built at all. The government may need to find other means of generating power to make up the shortfall.

The 225-megawatt Myingyan power plant, which is developed, owned and operated by Singaporean firm Sembcorp, is considered a major step forward for a power sector that until now has struggled to attract international investment. Those that backed the project say it followed international standards and, if replicated, could pave the way for additional private power projects.

Singapore’s Senior Minister of State Mr Chee Hong Tat said at the ceremony that the US$310 million Myingyan project represented a “major” Singaporean investment in Myanmar that would not only provide power to 5 million people but also “demonstrates the strong partnership between Myanmar and Singapore, across the public and private sectors”.

Mr Neil McGregor, group president and CEO of Sembcorp Industries, described it as “a state-of-the-art, efficient facility that signals a new era of advancement for Myanmar’s power sector”.

“This project demonstrates Sembcorp’s ability to serve as an integrator that brings together finance, technology, as well as technical and operational expertise to solve infrastructure challenges for the benefit of society, and for the betterment of people’s lives.”

But is Myingyan really a model for development? It has not been without its share of problems, though some of these reflect the environment in which Sembcorp is operating. 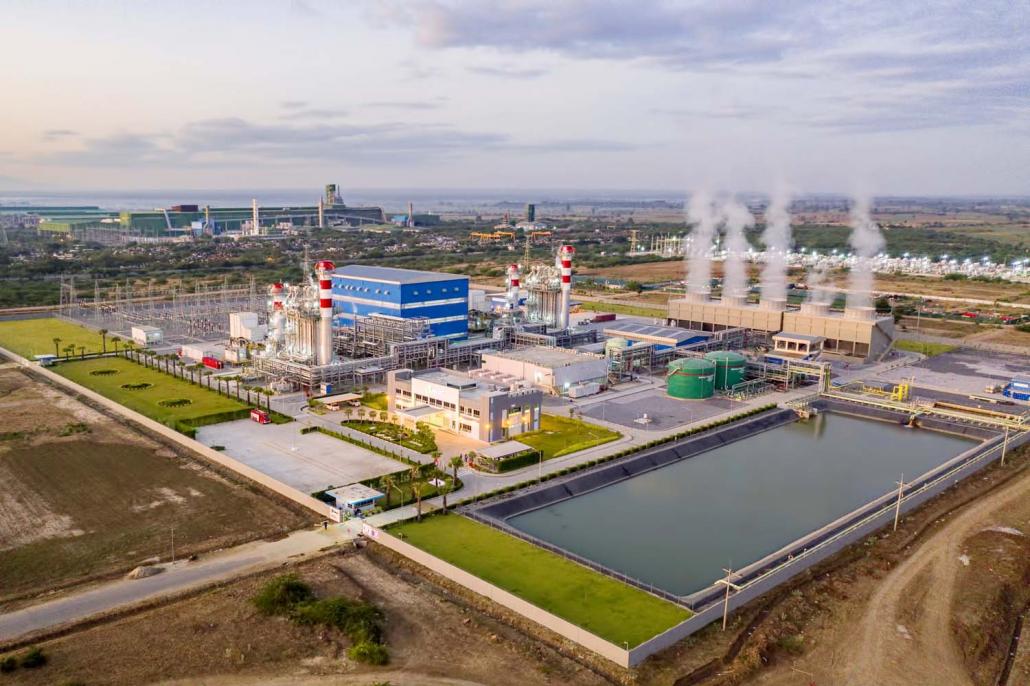 The Myingyan power plant is considered a major step forward for the power sector. (Supplied)

As Frontier reported in November 2017, the company has been embroiled in a legal dispute with its proposed local partner, who is no longer involved in the project.

In June 2017, businessman U Kyaw Paing filed a civil suit in the Yangon Region High Court seeking an injunction to stop Sembcorp Myingyan Power from removing the name of his company, MMID Utilities, from agreements with the government, such as the power purchasing agreement.

In the complaint filed to the court under Civil Case No. 58/2017, Kyaw Paing alleged that Sembcorp Myingyan Power “is ignoring the involvement of the plaintiff in the project and trying to remove the plaintiff’s name from the project agreements entered into with the government departments without notifying nor receiving the consent of the plaintiff”, and sought K10 billion in damages. Kyaw Paing told Frontier in late March that the case is ongoing and declined to comment further.

Journalists who attended the opening ceremony, held six months after the plant went into full operation, were also left disappointed as some of their basic questions went unanswered.

In particular, their efforts to learn more about the 22-year power purchasing agreement that Sembcorp signed with the state-owned Myanma Electric Power Enterprise (now the Electric Power Generation Enterprise) in March 2016 were deflected.

The only information Sembcorp would give is that the plan uses 37 percent of the gas available to Mandalay Region from the Shwe gas pipeline. Company officials referred questions on the tariff and other matters related to the PPA to the government, but Ministry of Electricity and Energy officials at the event declined to comment.

This has also been a frustration for some civil society groups. IFI Watch, an independent organisation, said it had also been denied access to the PPA terms.

But it drew attention to other issues with the project, including environmental concerns, and suggested that investors in other projects should try to learn from these experiences.

IFI Watch has been urging the company to provide compensation to farmers who had to clean up solid waste that was left on their land during the construction phase, and to create a process whereby local people are given advance warning of potential noisy or vibration-causing equipment testing.

In a September 2018 report, it also called on the plant operator to clarify the situation regarding wastewater discharging into the Ayeyarwady River. It suggested Sembcorp should conduct on-going monitoring of the river near the wastewater discharge point and in downstream communities to measure any impacts related to reduced water levels, increased temperatures or pollutants present in the wastewater.

“The thing we have most recently been concerned about is water pollution,” said Daw Khin Hnin Hlaing, a senior programme coordinator at IFI Watch Myanmar. “The plant is discharging large amounts of wastewater into the river every day but they haven’t allowed us to test the water as we would like to.” 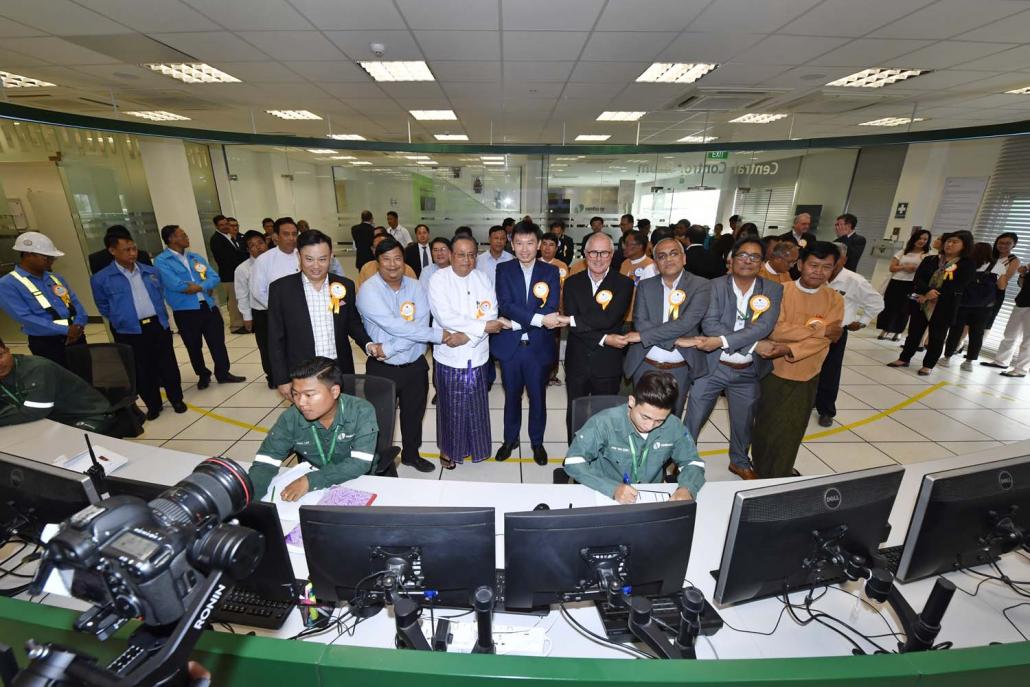 Officials in the control room at the opening ceremony of the Myingyan gas-fired power plant, which was developed by Singaporean company Sembcorp. (Supplied)

The wastewater is a concern for the community because it is discharged into an irrigation canal that is also close to an area used by local fisherman. The Ministry of Agriculture, Livestock and Irrigation developed the canal as part of a water-pumping project that is designed to irrigate 7,800 acres of farmland in 10 surrounding villages.

“Some fishermen have reported that there are now fewer fish in that area,” said Khin Hnin Hlaing. “We are also concerned about the potential impact downstream, where villages are located beside the river.”

U Thet Naing, a 52-year-old community leader from Htan Pin Tan, a fishing village near the plant, said he was concerned about the wastewater and potential impact on livelihoods. “We do our fishing in this area but the company doesn’t even allow us to take four gallons of their wastewater to test. My biggest concern is that the wastewater could harm the fish species in this area.”

U Tin Aung Swe, the health, safety, security and environment manager at Sembcorp Myingyan Power Company, denied there was an issue with the wastewater and said the water released by the plant had a pH level of between 6.5 and 6.8.

“When we use the Burmese term for wastewater, the villagers get an unpleasant feeling because they don’t understand it well,” he said. “But after the water is treated at the plant, it becomes safe and clean.”

Khin Hnin Hlaing said that if companies and the government consulted more with local communities for future projects, then that could help to avoid disputes.

“They need to know what their real concerns are and find out the solutions,” she said.

IFI Watch plans to follow up with Sembcorp in early May about the issues of concern it has raised. “If we don’t see the improvements that we’ve asked for,” she said, “we’ll report it to the ADB.”

Correction, April 4: This article has been amended to reflect the fact that IFI Watch is an independent organisation.