Environmentalists are campaigning to prevent the destruction of the nation’s remaining mangrove forests because they provide protection from extreme weather and support a rich variety of marine life.

IF another powerful cyclone were to pummel the Ayeyarwady Delta it could have a more devastating impact than Nargis in 2008, one of the worst natural disasters in Myanmar’s history, environmentalists have warned.

The reason is the continuing destruction of mangrove forests that provide a coastal buffer against extreme weather.

To help protect the delta and other coastal areas where mangroves are or have been abundant, projects to rehabilitate, regenerate and replant the forests are taking place in Ayeyarwady and Tanintharyi regions, as well as Rakhine State.

“If a cyclone comes to the [Ayeyarwady] delta, the impact could be twice that of Nargis because most of the coastal areas are flat with no mangrove cover,” said U Win Maung, chairman of Worldview Myanmar, an non-government organisation associated with Sri Lanka-based Worldview International Foundation, that is planting mangroves in Ayeyarwady Region.

Deforestation has led to a dramatic reduction of mangrove cover in Myanmar.

When Nargis roared out of the Indian Ocean and slammed into the delta on May 2, 2008, it killed an estimated 140,000 people and caused massive property damage. The United Nations said more than 2.4 million people were affected.

A 2009 study by the United Nations Environment Programme said Nargis “destroyed 38,000 hectares (93,900 acres) of natural and replanted mangroves, submerged over 63 percent of paddy fields and damaged 43 percent of freshwater ponds in the delta.” The report also said that pre-existing deforestation and the degradation of mangroves exacerbated the impacts of the cyclone.

The government has since built 54 cyclone shelters throughout Ayeyarwady but that is not enough for the region’s population of more than six million.

“We need the urgent rehabilitation, planting and enrichment of mangroves in our country,” said Dr Maung Maung Than, an environmentalist and mangrove specialist. “If we do not have a mangrove plan over the next 10 years, it will be to the great detriment of the country,” he said.

The ministry is working with the International Union for the Conservation of Nature, Japan International Cooperation Agency and Worldview International Foundation, to increase mangrove cover.

U Kyaw Zaw, director of the ministry, said mangrove cover in Ayeyarwady had fallen by 90 percent in the last five years, mainly because of shrimp farms and the illegal expansion of paddy fields.

A coastal area with mangrove cover less than 100 metres from the sea can reduce the impact of natural disasters such as cyclones by between 70 percent and 80 percent, said Maung Maung Than, citing research from Thailand.

Nearly 24,281 ha (600,000 acres) of coastal land in Myanmar is vulnerable to natural disasters because of the depletion of mangroves, said a ministry spokesperson.

U Aung Than Zin, chief executive of the Myanmar Environment Rehabilitation-conservation Network, said the main reasons for mangrove destruction in Ayeyarwady, Tanintharyi and Rakhine included charcoal production, and land clearing for shrimp and salt farms.

MERN is working with other organisations to try and protect mangroves, but a challenge they face is the use of charcoal as an energy source for cooking, said Aung Than Zin. 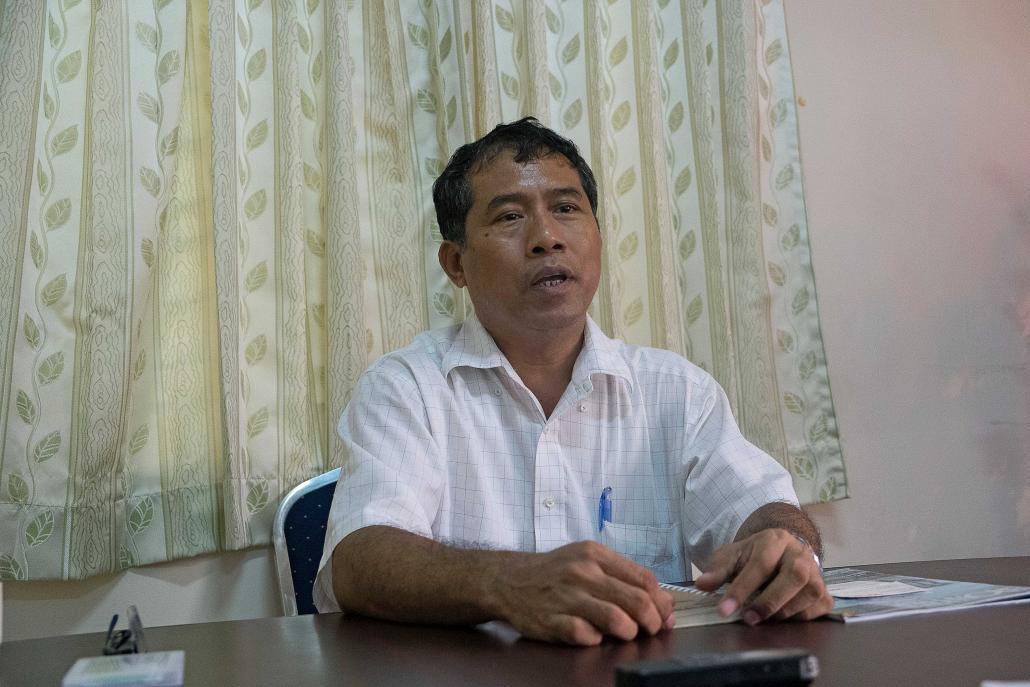 Four out of five households use charcoal or wood as an energy source, the 2014 census showed.

Win Maung said Ayeyarwady has been the main source of charcoal and other wood used in Yangon in the last five years.

He said the State Peace and Development Council government that ruled the country until 2011 had promoted the expansion of paddy fields and shrimp farms without considering the impact on the environment, including mangrove forests.

U Maung Maung Kyi, chairman of the Rakhine Coastal Region Conservation Association, said 8,093 hectares (20,000 acres) of mangroves was lost in the state because of the military government’s push for more paddy fields and shrimp farms.

“The SPDC pushed for more paddy field and shrimp farming and this led to so much loss of mangroves in Rakhine State. Now, three-fifths of the mangrove cover has been lost in Rakhine,” he told Frontier.

As well as providing protection from extreme weather and erosion, mangrove forests create unique ecosystems that sustain and protect a range of marine life, and serve as nurseries for many species.

“As the saying goes, ‘no mangroves, no fish’,” said Maung Maung Kyi. “That is really true because many of the smaller fish depend on mangroves and the life of a tiger prawn starts in the mangroves,” he said.

The ability of mangroves to tolerate high salinity levels in the tidal areas where they grow is because some species have root systems that exclude salt from water uptake and others excrete salt from glands on their leaves.

Mangrove conservation can contribute towards easing the impact of global warming because the forests have the ability to store large volumes of carbon dioxide, much of which is produced by burning the fossil fuels blamed for the gradual rise in our planet’s temperature.

Maung Maung Kyi said each hectare of soil in mangrove forests can store 1,000 tonnes of carbon dioxide and their leaves can absorb carbon dioxide at five times the rate of other trees.

It’s essential that mangroves be protected, he said.

“If we cut down mangroves, it will only have a negative impact on our lives.” 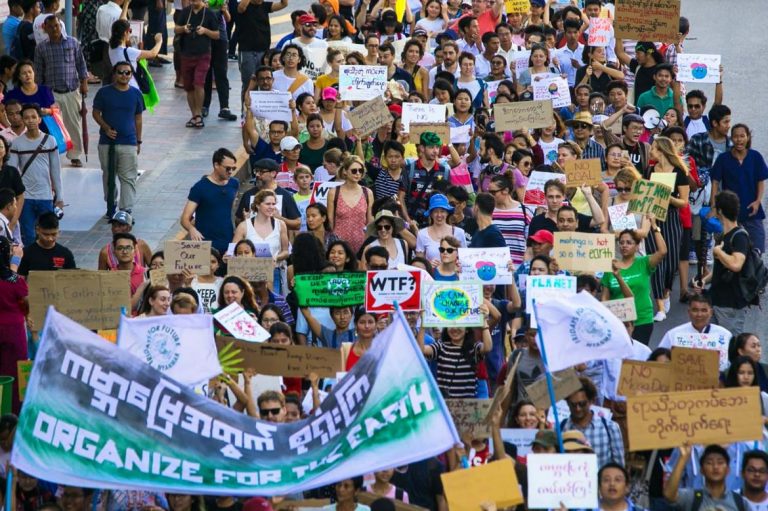 Environmentalists fear the junta is ignoring its climate change mitigation commitments and putting climate-vulnerable Myanmar in a more precarious position.
BY Frontier