Rites and raucous fun at the Taung Byone nat festival

The biggest nat festival of the year – an exuberant, boisterous spectacle that honours two legendary heroes who met tragic ends – was celebrated this month in a village near Mandalay.

WHEN PAST Myanmar governments imposed curfews due to political strife or war, one location was always exempted, depending on the time of the year: the shrine at Taung Byone village near Mandalay that honours two of the most powerful members of Myanmar’s pantheon of 37 nats, or animist spirits.

The raucous, annual Taung Byone nat festival in mid-August is the biggest celebration of its kind in Myanmar. Nothing has stopped worshippers converging on the village to pay their respects to the two revered brother nats – not even World War II or the 1988 uprising, said Daw Sein, 84, a Tarmwe Township resident who has attended the festival annually for the past 50 years.

“Even though the curfew was issued for the whole country, the Taung Byone festival could not be closed; the government had to authorise the festival,” she said, referring to the events in 1988.

The 2014 census showed that 408,045 people, or 0.8 percent of the population, are animist, but this fails to acknowledge the many Buddhists who also worship nat spirits. Thousands travel to Taung Byone for the festival each year, including a large number of spirit mediums, known as nat kadaws.

Nothing is more important to those who worship nats than attending the festival, which is held each year from the 10th waxing day of the month of Wagaung to the full moon day. As Myanmar’s calendar is lunar, the date in the Western calendar changes each year: this year the Taung Byone festival ran from August 13 to 18. However, devotees typically begin arriving at least two days earlier.

It is popularly believed that the nat brothers venerated at Taung Byone are the incarnations of princes who lived nearly 1,000 years ago. In common with many nats, they died in tragic circumstances.

The legends and oral histories about the two nats originated during the reign of King Anawrahta, who established the Bagan empire during his reign from CE 1044-1077, and is regarded as the founder of the first Burmese state.

Their family history, however, is marked by a series of sad incidents. According to legend, Byat Ta, a loyal military officer from a city in lower Myanmar, came to Anawrahta and sought protection after his elder brother was killed. Although Byat Ta was favoured by the king, he was killed after becoming the victim of a conspiracy in the royal court.

Aware that Byat Ta was survived by two sons, Min Gyi and Min Lay, Anawrahta summoned the duo to serve in his army to help compensate for their father’s death. On their first mission, they helped to carry sacred tooth relics of the Lord Buddha that had been sent from Sri Lanka to Anawrahta, who had them enshrined in the Lawkananda Pagoda at Bagan.

According to legend, Min Gyi and Min Lay confronted an invading army commanded by a Chinese king, whose defeat in the ensuing battle was attributed to the brothers’ military prowess.

After the defeat of the Chinese, Anawrahta decided to build a pagoda at Taung Byone. It was found to be two bricks short when it was completed, a fault blamed on the negligence of Min Gyi and Min Lay. 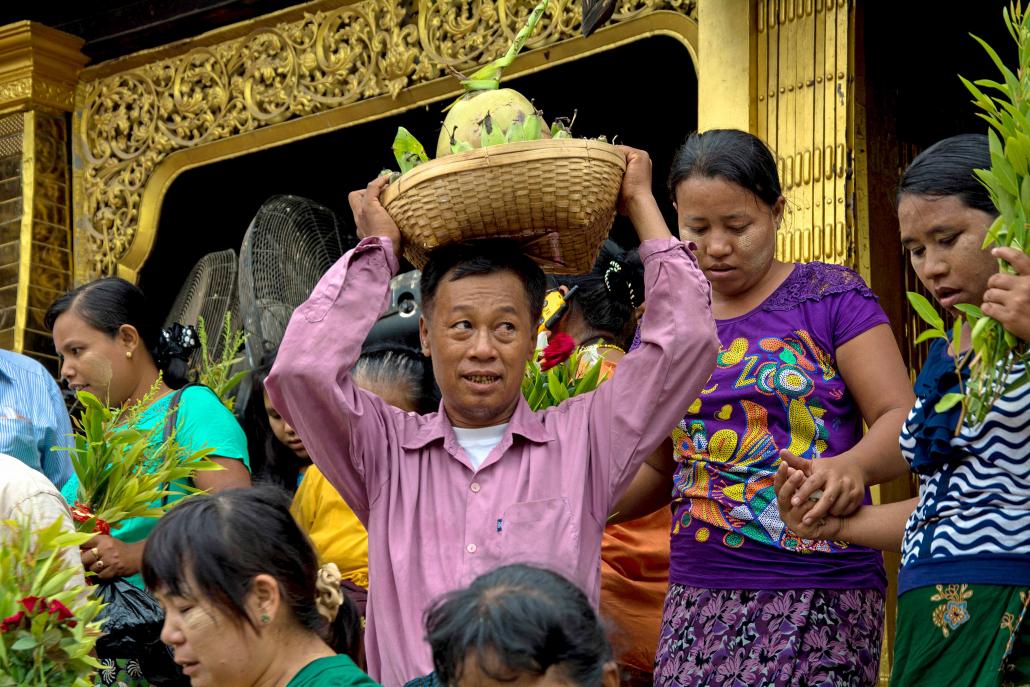 Anawrahta was displeased and wanted the brothers to be punished. Although he had not ordered their execution, they were killed by over-zealous courtiers.

Those who worship the two nats are not fussed if the legends do not accord with historical facts; their overriding interest is being able to honour the brothers by participating in the rowdy annual festival.

Daw Sein will not be among the throng this month, however.

“I can’t go there this year, but I will donate some money for the festival through a messenger,” she said.

A friend had already left for Taung Byone despite having recently undergone a medical operation, Daw Sein said.

The opening of the festival on the morning of August 13 was followed in the afternoon by an assembly of nat images.

The next morning, nat images of the brothers were washed on the bank of the Ayeyarwady or bathed at other locations, on what is customarily the busiest day of the festival.

Another nearby nat festival is inextricably linked to Taung Byone, and many worshippers try to attend both each year. The Yadana Gu festival honours Popa Mai-daw, the mother of Min Gyi and Min Lay, and is celebrated at the former royal capital of Amarapura, near Mandalay. It begins a week after Taung Byone, on the 8th waning day of Wagaung, and runs to the last day of Wagaung (this year’s Western calendar dates are August 26 to September 1.

When the two brothers were summoned to the palace after the death of Byat Ta, their mother was left alone. According to legend she died of a broken-heart at Yadana Gu after her sons were executed.

The main shrine honouring Popa Mai-daw, the protector of women and families, is on top of Taungkalat, a volcanic plug on the slopes of Mt Popa that is considered the home of Myanmar’s most powerful nats. According to legend, Popa mai-daw once lived there as a human, and Byat Ta met her on his daily trip from Bagan to Popa to fetch flowers for the king.

About four or five months after the Taung Byone festival, nat worshippers gather again at the shrine to the brothers for a ceremony linked to their military careers.

The going-to-war ceremony, which falls on the 10th waxing day of Nattaw – December 9 this year – marks the date when the brothers left to confront the invading Chinese force. Worshippers offer food in a gesture symbolising the provisions needed for a military expedition.

It is widely believed that the prayers of worshippers who attend the Taung Byone festival will be answered if they promise to attend the going-to-war ceremony.

On the flip side, worshippers who fail to return for the going-to-war ceremony will experience mishaps.

“Shwe Hpyin Nyinaung have a strong will,” said Daw Sein. “You must keep your promise to them.”

Small, independent groups are waging guerrilla warfare on the streets in an effort to undermine the military regime but the rising violence has some Yangon residents worried for their safety.
BY Frontier