Restoring the legacy of the Judson Church

Founded by legendary missionary Adoniram Judson, the First Baptist Church in Mawlamyine is set to undergo significant restoration, including the replacement of its leaking roof and removal of sheeting containing deadly asbestos fibres.

ON THE morning of December 11, about 50 people are seated in the long wooden pews at Mawlamyine’s First Baptist Church. The mass, led by Reverend Kyi Shein, proceeds much as it has for the past two centuries: prayers, a sermon, the singing of psalms, the passing of a collection plate and copious blessings for the congregation.

Aside from its soaring teak truss roof, the Gothic Revival church is relatively plain. But a sign in Myanmar language above the entrance hints at its status and historical importance: “Judson founded the church in Mawlamyine on December 2, 1827.”

The First Baptist Church is the third-oldest Baptist church in the country, and the first in the Mon State capital. Its founder, the American missionary Adoniram Judson, is a revered figure in Myanmar.

The first significant Baptist missionary to Burma, he converted thousands of people over a 40-year period in the early 19th century and established several churches, including the one at Mawlamyine. He also translated the Bible into Myanmar language and wrote the first – and still widely used – Myanmar-English dictionary. 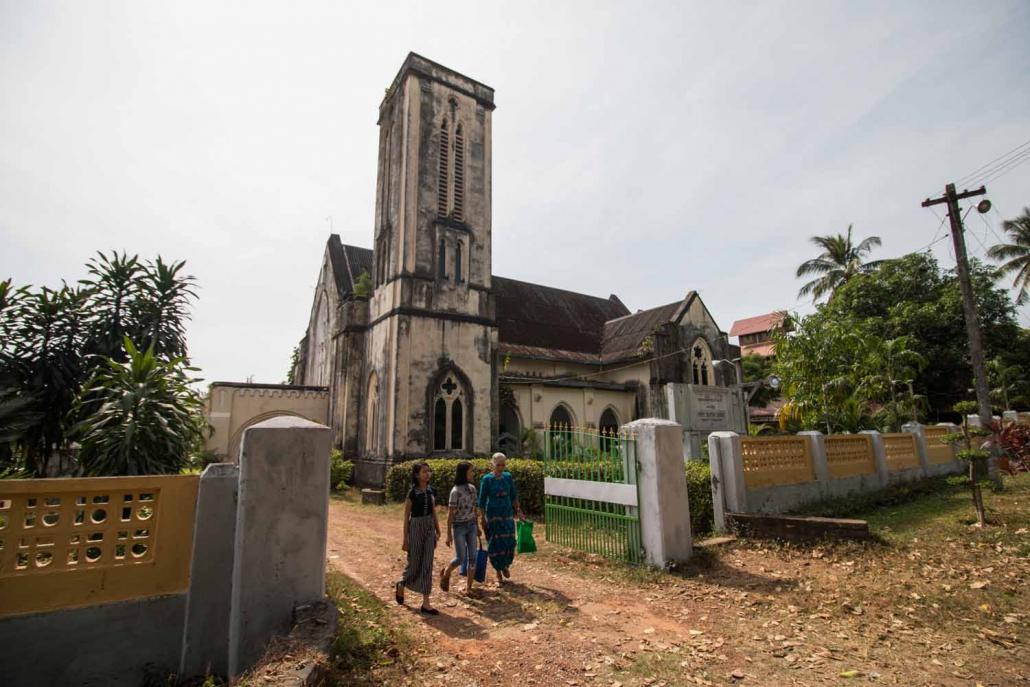 The World Monuments Fund expects to begin repairs on the building in the coming months, with work set to run for about two years. (Nyein Su Wai Kyaw Soe / Frontier)

Aside from its link to Judson – who is referred to as “Yudathan” in Myanmar language – the church is, naturally, a focal point for members of the local Baptist community.

Ma Thiri Aye, 30, has been attending the church every week since she was a girl. A member of the Myanmar Baptist Convention, she lives in nearby Sit Ke Gone Ward.

“I love our church,” she told Frontier at the end of the mass last month. “We grew up in this compound, which is one of the historical buildings of Mawlamyine.

“I first started coming when I was eight – my mother would go to church and pray every weekend and I would attend Sunday school here.”

Kyi Shein, the 12th reverend since the church was founded, expressed a similar fondness for the building and its important place in the history of Christian worship in Myanmar. “We are so proud of our church because it is the first Baptist church in the city,” he said.

But the current church building, which is set on a 1.55-acre corner block and was built between 1907 and 1924, is showing signs of both its age and Myanmar’s notoriously harsh weather (Mawlamyine receives almost 200 inches of rain a year, on average, while temperatures in the summer average about 30 degrees Celsius).

The walls and ceilings are suffering extensive water damage, in part because of the failure of corrugated roof sheeting. The sheeting was installed when the roof was reconstructed after being destroyed during World War II. 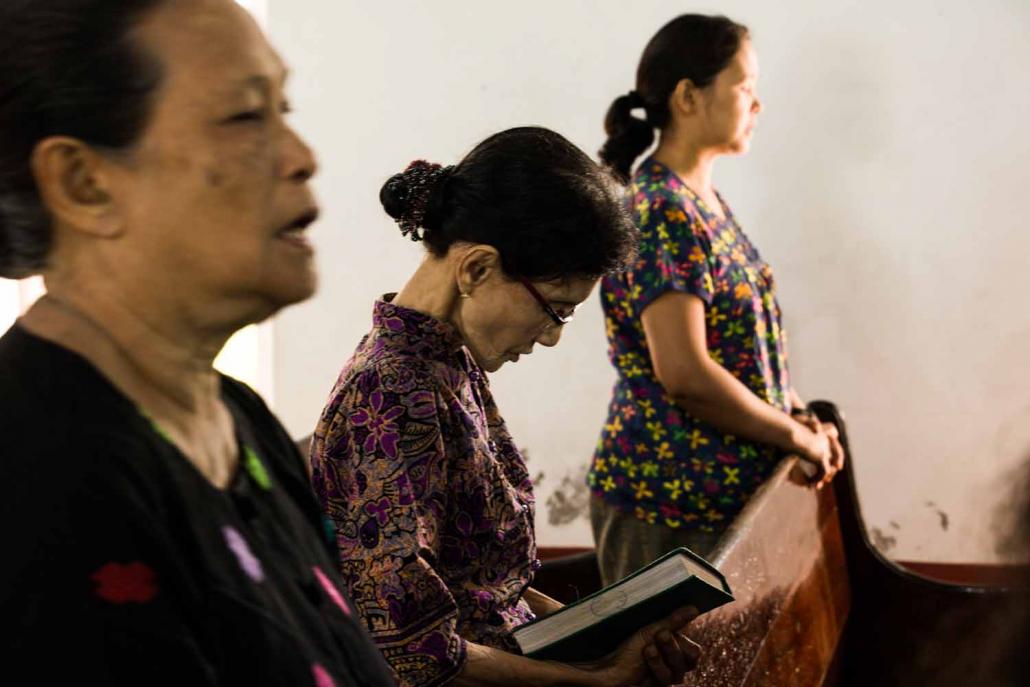 Help is at hand, though. In September 2015, the United States embassy in Yangon announced a US$125,000 grant from the Ambassadors Fund for Cultural Preservation to the World Monuments Fund to initiate a restoration program.

WMF had previously received a grant from the embassy to undertake surveys and restoration work at Shwenandaw Kyaung in Mandalay, in collaboration with the Department of Archaeology and National Museum. Due to the success of the project, the embassy proposed that WMF identify a project in Mawlamyine with an overlap in Myanmar and American history.

In January 2016, WMF began site work with a comprehensive documentation program. “Prior to this only a vague and fractured spoken history of the current structure’s original construction and a few tattered photographs of one of the previously demolished church buildings survive,” said Mr Jeff Allen, WMF program director for the Judson First Baptist Church Rehabilitation Project.

WMF has since assembled 16 drawings with mapped damage to roofs, floors, masonry and carpentry. Analysis of the drawings enabled WMF to come up with a two-point renovation strategy. One strand would focus on preventing further water infiltration by replacing or repairing decayed sections of the roof, while the other would ensure the project was sustainable by building up the church congregation’s capacity to take care of the building.

But then a complication arose: the corrugated roof sheeting was found to contain asbestos, a carcinogen that the World Health Organization estimates is responsible for 107,000 deaths a year globally.

In many countries, asbestos use has been banned and its handling is highly regulated. In contrast, Myanmar has many buildings containing asbestos materials but no laws or guidelines on its handling or removal. As a result, asbestos is often removed and disposed of in ways that are unsafe for workers and the environment.

Allen said the asbestos find was “a game changer” that meant WMF would have to take “a new, more thoughtful approach” to the project. But it was also an opportunity; WMF was able to expand the focus of the project to include lobbying for standards on the handling of hazardous asbestos building materials. In November, it led a workshop on the topic in an effort to begin raising awareness about the risk of asbestos-related diseases. 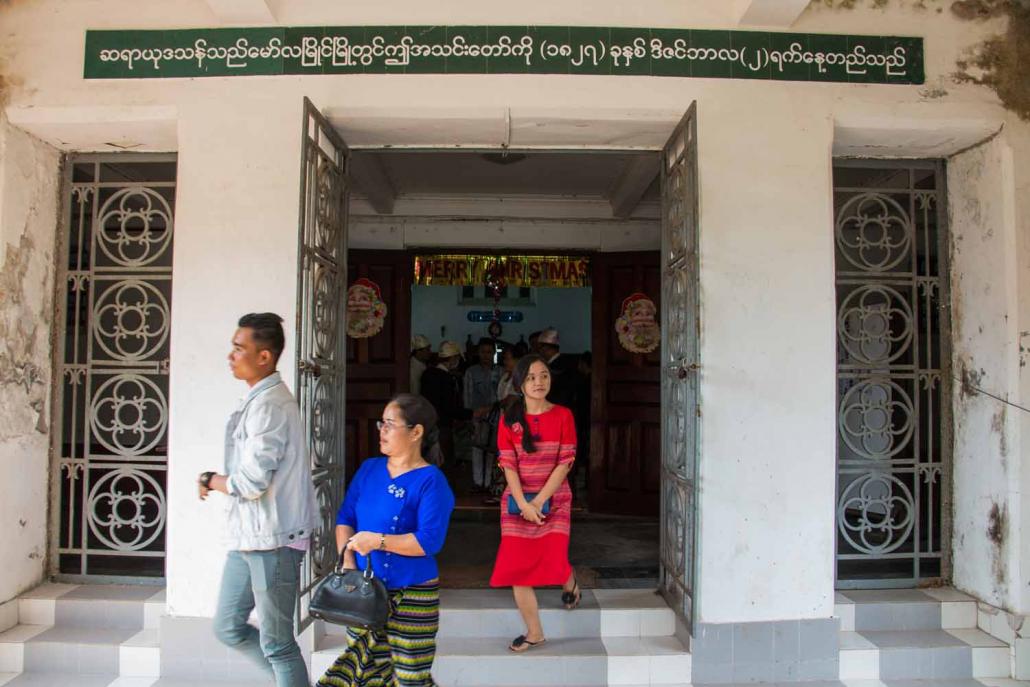 Worshippers exit the church under a sign saying it was established by Adoniram Judson in 1827. (Nyein Su Wai Kyaw Soe / Frontier)

In December, WMF submitted an application for a grant to cover building work. It’s expected to be approved early this year, with an anticipated completion date of February 2019. Allen said the first step will be repairs to side roofs and waterproofing before the rainy season, with large-scale work to begin once the monsoon recedes. The weather is shaping up as a major challenge, he added.

“Mawlamyine is not the place that easily permits careful roof replacement and the meticulousness of conservation on historic wood buildings,” he said.

He hopes the project can be an example of preservation being carried out according to international standards. The project will see skills transferred to local experts who can then apply them to other projects — particularly important in a country with no academic institutions training specialists in conservation.

“In Myanmar there is little appreciation of the importance of preserving heritage according to international standards,” Allen said, adding that this was “worrying in a country with an extremely rich inventory of built heritage”.

“A lot of damage is being done to historic buildings because people do not do their homework first; often more than half the time of a project should be devoted to assessing, studying and designing interventions before a hammer touches a structure,” he said.

Mawlamyine’s stock of heritage, particularly colonial-era buildings – the largest collection in Myanmar outside of Yangon – makes it the ideal location for such a preservation project. Its streets are lined with teak and brick mansions and two-storey shophouses with colourful wooden louvre windows. Grand administrative buildings occupy prime locations on Upper Baho Road, looking down toward the river. There are scores of pagodas, several large mosques and Hindu temples, and around a dozen Christian places of worship, several of which like First Baptist Church date to the 19th century.

Unlike Yangon, where economic and population forces have resulted in the destruction of many historic buildings, Mawlamyine’s old quarters are largely intact. In recent years, they have spurred a boom in foreign visitors, but there is clearly potential for much more growth. The First Baptist Church is one of the more well known sites in the city, and receives regular visits from curious travellers.

“Every tourist visits Judson Church – it’s one of the more famous ones in Mawlamyine,” said Ko Nay Min, a resident of Mayangone Ward. 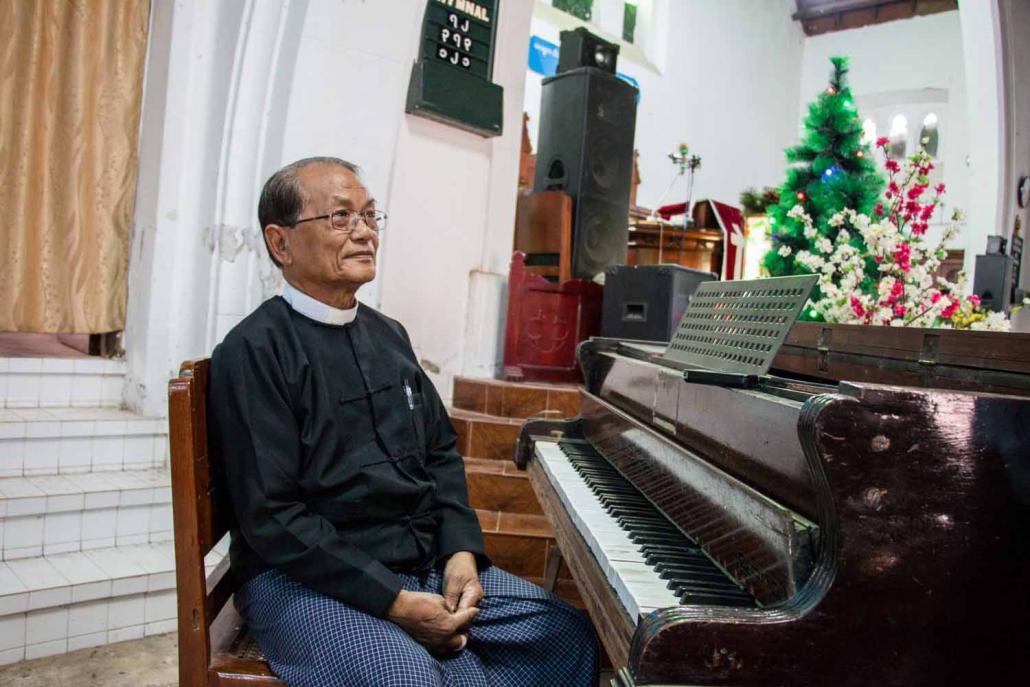 U Kyi Shein is the church’s 12th reverend since it was founded by Judson, who remains a household name in Myanmar. (Nyein Su Wai Kyaw Soe / Frontier)

The concentration of churches in Mawlamyine – including Burmese, Mon and Kayin Baptist, Roman Catholic, Anglican and Adventist – is a legacy of both missionaries like Judson and also the country’s former colonial rulers.

Not all are widely used today. Mon State has the smallest Christian population nationally, according to the 2014 census, with just 0.5 percent of the population – 10,791 worshippers in all – well below the national average of 6.3 percent. St Matthew’s, a towering, red brick Anglican church in Mawlamyine, caters to a small congregation of just a few dozen; from the outside, many assume it has been abandoned.

But there are still some who attend regularly. Among the members of the First Baptist Church congregation is Daw Nu Nu Thein, 80, who lives in Mayangone Ward and sits on the church’s board of trustees. She said her great-grandfather was a follower of Judson and she started attending the First Baptist Church regularly in the 1970s, when she moved to Mawlamyine from nearby Mudon.

“God always blesses me because I pray here regularly,” she told Frontier. “I put my faith in Jesus, that’s why I’ve enjoyed such a long and healthy life.”

She’s glad that the WMF has secured a grant to restore the church structure and, in particular, to safely remove the decaying asbestos sheeting.

“I’ve been involved in the church for many years and we never knew that the roof was dangerous because of the asbestos,” she said.

She hopes the restoration project will return the church to as close to its original state as possible.

“I don’t want it to become modern looking,” she said. “I want it to be better than before, but also to retain its identity.”

Top photo: The current First Baptist Church building was built from 1904 to 1927 in a Gothic Revival style, but a church has existed on the site since 1827. (Nyein Su Wai Kyaw Soe / Frontier)