Myanmar needs to do much more to ensure responsible conduct by investors, and a National Action Plan could point the way forward.

Since the National League for Democracy government took office in 2016, State Counsellor Daw Aung San Suu Kyi has put an emphasis on the need for responsible investment that creates jobs, provides new opportunities, sustains growth and spreads prosperity to all people in Myanmar.

At the second Myanmar Global Investment Forum in Tokyo in October 2019, Aung San Suu Kyi said, “Myanmar is ready to welcome all investors. Myanmar is in the process of transforming an opaque, non-competitive, connection-based economy into a larger, more transparent, more competitive, rules-based economy.”

But can responsible investment in Myanmar become the norm? The country has a legacy of projects that have had serious negative social and environmental impacts. In particular, there has been an abundance of investment in Myanmar that requires contentious land acquisitions and entails hazardous waste disposal. This threatens the land, water and broader eco-system that the people rely on.

But attempts to encourage responsible investments and ensure a level-playing field have done little to prevent investments that pose serious harm to the environment and society. While the legal framework for scrutinising investment for environmental and social harm seems adequate on paper, relevant authorities have been unable to effectively uphold their mandates.

An analysis of the regulatory landscape reveals a hodgepodge of different laws, bodies and regulations, which inevitably results in gaps between mandates, insufficient coordination and lacklustre monitoring. As a result, irresponsible investors are able to ignore or circumvent the system, and in doing so, compromise the agenda for all parties. Conflicts of interest and corruption are also constant obstacles to a level playing field and responsible business conduct.

Some large investments with a potentially huge negative impact on the environment and society begin without the developer even applying for Myanmar Investment Commission approval. In Kayin State’s Myawaddy Township, for instance, the joint venture company Myanmar Yatai International Holding Group received MIC approval to build 59 luxury villas near Shwe Kokko village but construction work has far exceeded what was allowed under the MIC permit, highlighting the challenge of enforcement.

A problem of permits

The interaction of investment and environmental permitting is also problematic. Under the pre-2016 investment laws, investors were told to submit an environmental impact assessment with their investment proposal. But these assessments were undertaken without due process or public participation. Most of the so-called EIAs submitted to MIC were slipshod, and the commission had no expertise to assess them. After the MIC permit was issued, the documents were packed up and sent to Ministry of Environmental Conservation and Forestry, as the environment ministry was then known, which had no power to address the issues they raised.

The confusion related to MIC permit and EIA sequencing was resolved in the 2016 Myanmar Investment Law. This made clear in Section 65q that an MIC permit was conditional on the project’s adherence to the environmental and social rules and regulations, and that other necessary permits needed to be obtained before the investment proceeded.

Unfortunately, not all investors – or for that matter, government officials – understand this new sequencing. Environment officials tell us of their frustration that construction of many projects starts once an MIC permit is issued, and long before they have approved an EIA and issued an Environmental Compliance Certificate (ECC). The opportunities that an EIA process offers to identify and pursue better alternatives are therefore lost, since the investor resists any change because construction has already begun.

There are still many cases where projects have begun after receiving MIC approval but without undergoing an EIA. Residents in Kayah State allege that a metal refinery approved by MIC last year is being built in Loikaw’s industrial zone despite having not completed an EIA. In southern Myanmar, MIC has issued permits to hotel projects in the Myeik Archipelago without requiring environmental and social safeguards to ensure they do not harm biodiversity and local livelihoods.

The Directorate of Investment and Company Administration therefore needs to clearly communicate to investors that an MIC permit is conditional on them obtaining necessary environmental clearances. This is reinforced by Article 83 of the EIA Procedure which, for projects that need an initial environmental examination or EIA, requires a project proponent to get an ECC “before any permit is granted or issued by any ministry, or any other competent authority in respect of any application to proceed with implementation of such projects”. In other words, getting an MIC permit is not a green light to break ground with construction. Environmental permits are needed first, and these might even require a change to the location or design of the project.

What else needs to change?

Major reform is still needed to make responsible investment the norm in Myanmar. Weaknesses in the existing regulatory system need fixing, including better coordination, monitoring and enforcement, as well as the implementation of existing legal requirements for transparency and consultation that both government and investors are ignoring. But applying the existing regulatory system in full will not address some of the problems that have arisen with investments. This is particularly true in ethnic areas where investments can fuel conflict by benefitting certain groups, and creating damaging environmental and social impacts which are inconsistent with the objectives of the Myanmar Sustainable Development Plan.

The problems these investments create are intimately entwined with the peace process. However, they also reflect the long overdue need for Myanmar to adopt spatial or land use planning through an accountable, transparent and participatory process, as foreseen in the 2016 National Land Use Policy.

The development of a Myanmar NAP provides an opportunity to compile a systematic baseline of the business and human rights situation in Myanmar, and identify gaps and necessary reforms. If undertaken in an inclusive, transparent, and participatory manner, the process of developing a Myanmar NAP provides the opportunity for all stakeholders to identify reforms, and hold government to account on progress. It can be a catalyst for much needed policy coherence and also offers the opportunity for government to demonstrate genuine progress on issues where they face international criticism, such as land rights and freedom of association and expression.

The NAP should be owned by the government but the question always arises as to which ministry should lead the process. A business-focussed ministry may be unwilling to challenge companies. In Thailand, the Ministry of Justice leads the NAP since it has responsibility for human rights. Myanmar does not have an equivalent ministry but it should consider establishing one after the election.

However, even without a National Action Plan, the government – and in particular the Ministry of Investment and Foreign Economic Relations and Ministry of Natural Resources and Economic Conservation – can take immediate steps to strengthen the existing regulatory system to make it clearer, more coordinated and implemented more consistently on the ground. After decades of problematic investment, Myanmar sorely needs a system that ensures a level playing field and creates an enabling environment for responsible business conduct.

Hnin Wut Yee is a deputy director at the Myanmar Centre for Responsible Business.  She wishes to thank Matthew Mullen at Article 30 and Mael Raynaud at Urbanize: Policy Institute for Urban and Regional Planning for their help in developing this article.

Myanmar’s new military regime is striving to present a business-as-usual approach to the economy in the face of daily street protests, but even a normally pliant private sector is crying foul at some of its initial steps.
BY Frontier 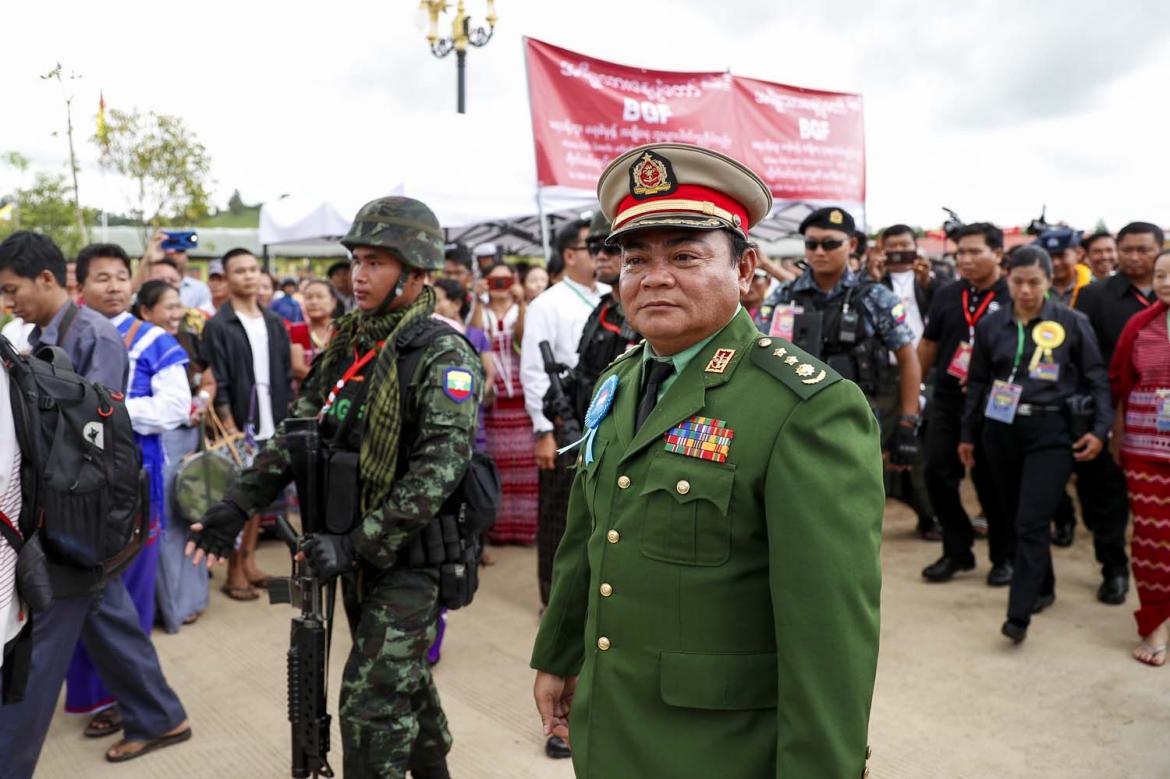