The 54th anniversary earlier this month of General Ne Win’s 1962 coup marked an event that continues to resonate in contemporary Myanmar.

Early on the morning of March 2, 1962, Tatmadaw tanks rolled through Rangoon’s streets and the army seized control of important buildings, including the Secretariat, Government House and the High Court.

Key figures, including Prime Minister U Nu and other members of the cabinet were arrested. Although some descriptions of the coup say it was bloodless, it cost the life of Sao Mye Thaik, the son of Burma’s first president, Sao Shwe Thaik, who was shot dead trying to defend his father.

The coup paved the way for its architect, General Ne Win, to introduce his “Burmese Way to Socialism”, a hybrid of Marxism, Buddhism and nationalism that effectively isolated the country from the rest of the world. The program’s objective was autarky and it devastated one of the region’s richest economies. The grim hardship it imposed on the people fuelled the resentment that ignited the national uprising in 1988 that came close to toppling the government.

“Our family was peeping out the window and saw army trucks pulling up in front of our gate that lined up along Goodliffe Road [now Sayar San Road]. We also heard sporadic gun shots coming from the sawbwa’s residence, and later learned that Sao Mye Thaik had been fatally shot.”

U Thant Myint-U wrote in The River of Lost Footsteps that Gen Ne Win outlawed western-style dancing and beauty contests, as well as horse racing (though he had been well known for having a flutter at Kyaikkasan racecourse). Western institutions were ordered to leave and Burma became cut off from the rest of the world.

“Just as the world outside was embarking on an incredible decade of turmoil and creativity, Ne Win and his generals were hanging a big Do Not Disturb sign on the front door. The sixties would pass Burma by,” U Thant Myint-U wrote.

U Nyunt Lwin was eight years old at the time of the coup and said he and his family saw it taking place from their home.

“I was living adjacent to the residence of Sao Shwe Thaik [on Kabar Aye Pagoda Road at the site now occupied by Pearl Condominium] and witnessed what happened that morning,” U Nyunt Lwin said.

“Our family was peeping out the window and saw army trucks pulling up in front of our gate that lined up along Goodliffe Road [now Sayar San Road]. We also heard sporadic gun shots coming from the sawbwa’s residence, and later learned that Sao Mye Thaik had been fatally shot,” he said.

“Things changed dramatically [after the coup]. Everything, services, shops, schools and companies [became nationalised]. Even today we can say that it had an effect on all sectors in the country.” 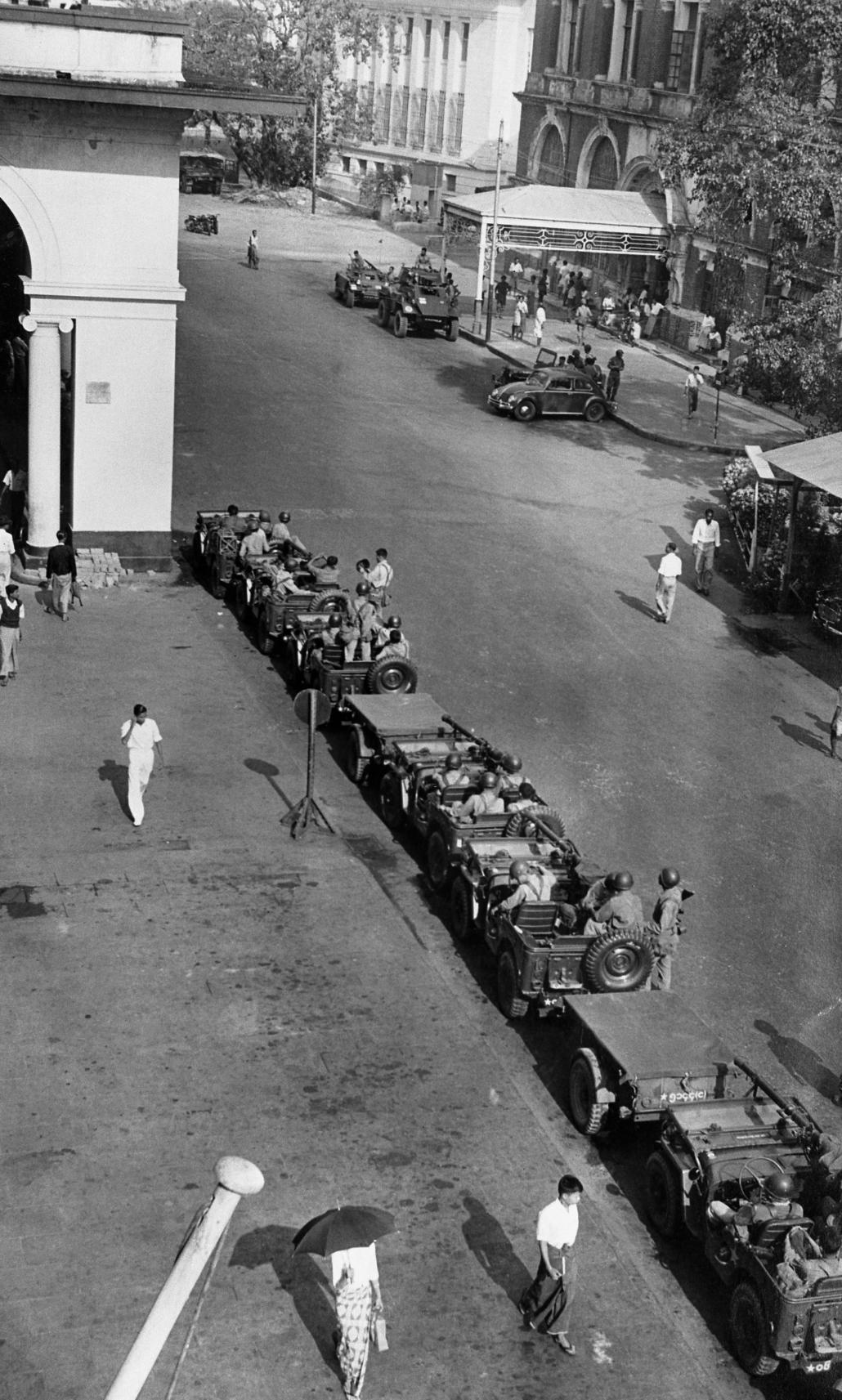 Military forces guard the streets of Yangon on March 4, 1962, the day General Ne Win took control of the country. (AFP)

Daw Mi Poun, who was six at the time of the coup, lived in the same compound as Prime Minister U Nu in what was then known as the Windermere Estate, in affluent Golden Valley.

“People used to come to the compound often to protest, but that day was a big one,” Daw Mi Poun recalled.

“I remember the family elders saying that Ba Ba Gyi (“Grandfather”) U Nu had been arrested. I remember him well. We used to visit him to pay our respects and I still remember him and his smile. He was a gentle, deeply religious person,” she said.

Among the prominent members and supporters of the ousted government arrested after the coup were dozens of Shan sawbwas (hereditary rulers) who had been invited by Gen Ne Win to attend meetings in Rangoon.

Sao Heio Hsen is a daughter of Sao Hso Holm, the last sawbwa of Mongyai, capital of the former Shan princely state of South Hsenwi. She was studying in Lashio at the time of the coup and her father was in Rangoon. He did not have his own home in the then-capital and was staying with friends and it took the military days to track him down. He was arrested on March 5.

“We were permitted to see him only two or three times during the six years of his detention,” said Sao Heio Hsen.

The arrest had the biggest impact on her mother, who in common with other mahadevis, as the wives of sawbwa’s were called, was only allowed to see her husband a few times during his incarceration.

“On New Year’s Day [in 1964], we heard a rumour that the sawbwas might be released on the fourth [Independence Day]. She was so excited hoping that the rumour might be true. On the morning of the third, she was having a bath when she suffered a cerebral haemorrhage and died two hours later,” she said.

Her father was eventually released in 1968 and lived for another 20 years. After his release “he was not the same old dad we used to know,” said Sao Heio Hsen.

Before 1962, the grandparents of ethnic-Chinese U Kenneth Aung (not his real name) owned a successful soy factory near Mandalay.

“The first thing he [Ne Win] did was seize all private businesses and make them state-owned, so my grandparents lost all their assets, and they had 10 children to feed,” U Kenneth Aung said. “Then soon afterwards, the anti-Chinese sentiment rose up and the family couldn’t even show their faces on the street because they are ethnically Chinese,” he said, referring to the animosity that was to cost dozens of lives during an anti-Chinese rampage in downtown Yangon in June 1967.

“A few years after the coup, my grandparents took their own lives,” U Kenneth Aung said, blaming the suicides on the seizure of their property.

“The coup was needed to restore law and order, but Ne Win should have returned power after peace was installed,” he said.

“He literally shut the country from the rest of the world and mismanaged the economy from top to bottom. We can still feel the effects of his rule today.”

Title Photo: Former Chinese President Hua Kuo Feng, left, and U Ne Win wave to a crowd in Beijing during an official visit in April 1977. (AFP)