Regarding the pain of others

It’s easy for long-term foreign residents of Myanmar to scorn western tourists for their ignorance of local matters. That doesn’t give us a free pass.

On November 9, 2015, the day after the country’s historic general election, the Myanmar Times sent a reporter to the National League for Democracy’s headquarters in Yangon’s Bahan Township — an oasis of affluence and privilege in a country notably lacking in both. As the scale of the NLD’s triumph gradually became apparent, thousands of exuberant supporters had flocked to the headquarters to celebrate the party’s emphatic success, 25 years after its first election victory was annulled by the former military regime.

The reporter encountered a French tourist who had inadvertently found herself caught up in the revelry. “To be honest, I don’t know anything about the history of Burma,” she told the Myanmar Times, before excusing herself to push through the throng and buy a T-shirt emblazoned with the NLD’s fighting peacock logo. “I knew the election was happening, but I don’t really know anything about it. It’s all quite exciting though.”

What do we make of such a glib response to one of the most momentous events in Myanmar’s modern history? Perhaps the first thing to acknowledge is that she is not the only benighted person to visit this country.

Myanmar social media was inundated with expressions of mockery and contempt last month for a jobless British traveller in Mandalay, who had brandished a sign in English and Burmese soliciting donations: it was later revealed she needed money to pay for a plane ticket to India to attend a meditation centre.

She was detained by the police and put on a train to Yangon, where she told Coconuts in an interview that gainful employment would interfere with her quest for spiritual purification — presumably, enlightenment is gleaned from sponging off the people of a country with one eighth the per capita income of her own.

Last month a foreign aid worker in the Kachin State capital, Myitkyina, told Frontier she witnessed four European tourists stopped at a Tatmadaw checkpoint on the city’s outskirts, casually telling the soldiers they had planned to drive in their rental car to Laiza, on the border with China.

The tourists seemed unaware that Laiza is the headquarters of the Kachin Independence Army and was the target of a Tatmadaw artillery attack in November 2014 that killed 23 people, though they did seem affronted that they were unable to continue their journey. 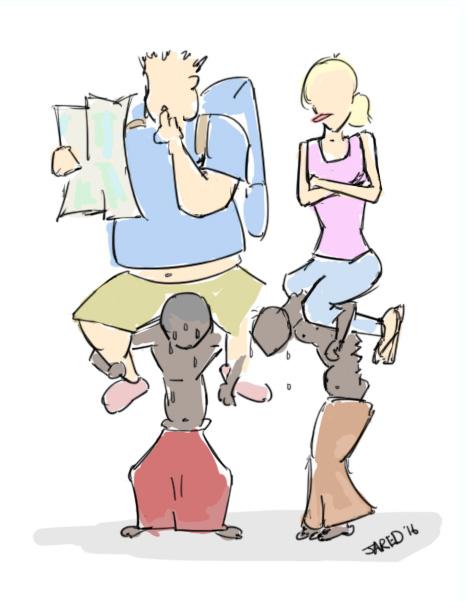 It’s all too easy to scorn the subjects of these stories, made easier still by the protective cloak they give to our own indifference to the suffering of others.

Four months after the election, a new chapter in Myanmar’s civil war, slum clearances and the outgoing government’s fire sale of assets have done nothing to dent the prevailing mood of cautious optimism in Yangon. It is a sentiment not shared by more than 4,000 people displaced by the fighting between the Ta’ang National Liberation Army and the Restoration Council of Shan State.

It is not shared by the 1,400 or more people who are still afraid to return to their homes after the military’s assault on the Shan State Progressive Party last year. And it is not shared by 85,000 displaced people in Kachin who have been living in camps since a ceasefire between the Tatmadaw and the KIA collapsed in 2011, the 4,200 Muslims confined to the Aung Mingalar ghetto in the Rakhine State capital, Sittwe, and the 2,500 people evicted from their homes last month in Mingaladon Township, only 15 kilometres from downtown Yangon.

In a speech in Bangkok last month to mark the end of his posting as the Southeast Asia bureau chief of the New York Times, Thomas Fuller reflected that the one constant of his time in the region was impunity: The perpetrators of corruption, malfeasance and state-sanctioned murder throughout the region might be well known but accountability is non-existent.

It is depressingly clear that knowledge is only one tool in the arsenal of the battle against injustice. Knowledge is not a catalyst for change without will. Absent the act of standing up and joining the battle against this impunity, awareness of custom and current events is nothing more than an instrument of self-satisfaction.