Escalating fighting, bitter and growing ethnic tensions and mysterious killings are blighting Rakhine State, and the situation is unlikely to improve any time soon.

THE FIGHTING between the Arakan Army and the government was a smouldering issue at a meeting with non-signatories to the Nationwide Ceasefire Agreement in Nay Pyi Taw on March 21.

It was the first meeting between the government-appointed National Reconciliation and Peace Centre and the eight non-signatories, which also include the United Wa State Party, the Kachin Independence Organisation and the Shan State Progress Party.

The AA’s political wing, the United League of Arakan, was represented at the meeting by Colonel Kyaw Han, who had told reporters that one of the group’s objectives was to establish a military headquarters in Rakhine State, where it enjoys considerable support.

The AA believed that only a “Rakhine army” would be able to take responsibility for peace and security in the state, Kyaw Han said.

Sources at the meeting said Kyaw Han’s comments were shot down by the vice chair of the NRPC, Dr Tin Myo Win. The sources quoted him as saying that the government was taking necessary measures to prevent an “armed group” that posed a threat to peace and security from establishing a permanent presence in Rakhine.

Tin Myo Win said that before the AA had become active in Rakhine, the state was “white territory”, meaning that it was free of conflict, unlike areas designated as “brown” or “black”.

The sources said he repeatedly used the term “white territory” to emphasise the government’s view that Rakhine was no longer peaceful because of the AA.

Tin Myo Win urged the AA to participate in political dialogue instead of fighting against the government.

The rise of the AA and the fighting with the Tatmadaw that has escalated since late last year has ensured that northern Rakhine has remained in the headlines since the attacks by Rohingya militants in August 2017 and the ensuing counter-insurgency operation that sent more than 700,000 Rohingya fleeing to safety in neighbouring Bangladesh.

A curfew has been in effect in Maungdaw Township since the first attacks by the Arakan Rohingya Salvation Army in October 2016.

The increase in fighting between the AA and the Tatmadaw and a series of mysterious killings has created a precarious environment in Rakhine. In recent months, politicians and public servants have been assassinated in the state capital, Sittwe, as well as Rathedaung, Myebon and Mrauk-U townships. The streets of Sittwe have been eerily quiet at night since last December, when a military intelligence officer was shot dead in public. Three Rakhine youths have been arrested over the incident.

The government’s severe measures aimed at maintaining law and order have fuelled deeply felt resentment among the Rakhine towards the Bamar-dominated government and Tatmadaw over historical and contemporary grievances, including the impoverishment of their state.

It used to be common for Rakhine Chief Minister U Nyi Pu to be accompanied by about 20 police in public but when he attended the opening of a market in Sittwe in December he was guarded by nearly 100 security personnel.

Ordinary citizens are also nervous. A journalist in Sittwe said he was so concerned about safety and the risk of being attacked that he made sure never to cover his face in public. “I never wear a helmet any more [when driving a motorbike] because I’m afraid of mistaken identity or making myself a target. I don’t even wear a hoodie,” he said.

An illustration of the hostility that many Rakhine harbour towards the Union government came after government spokesperson, U Zaw Htay, warned them not to support the AA.

“Do they want to see a cycle of violence lasting decades?” Zaw Htay said on January 7. “I want to tell the Rakhine people who are supporting [the AA]: Don’t think about yourself, but think about your next generation.”

The warning, which was issued after a high-level security meeting in Nay Pyi Taw after the AA attacks on security posts in northern Rakhine on January 4 that left 13 police dead, drew outrage from many Rakhine people. Social media posts expressed support for the AA and some young people publicly declared their intention to join the armed group.

Support for the AA seems stronger than ever, even among those who have been most affected by the fighting. At a monastery in Mrauk-U providing shelter for hundreds of people displaced by the fighting, a 40-year-old woman told Frontier in early March: “We can run from the fighting, we can suffer. It’s not any worse than before. We are just waiting for the AA’s victory.”

Although it is mainly members of the state’s Rakhine majority that have been affected by the fighting, it has also disrupted the lives of smaller ethnic groups, such as the Mro and other communities who live in remote mountainous areas far from any town. 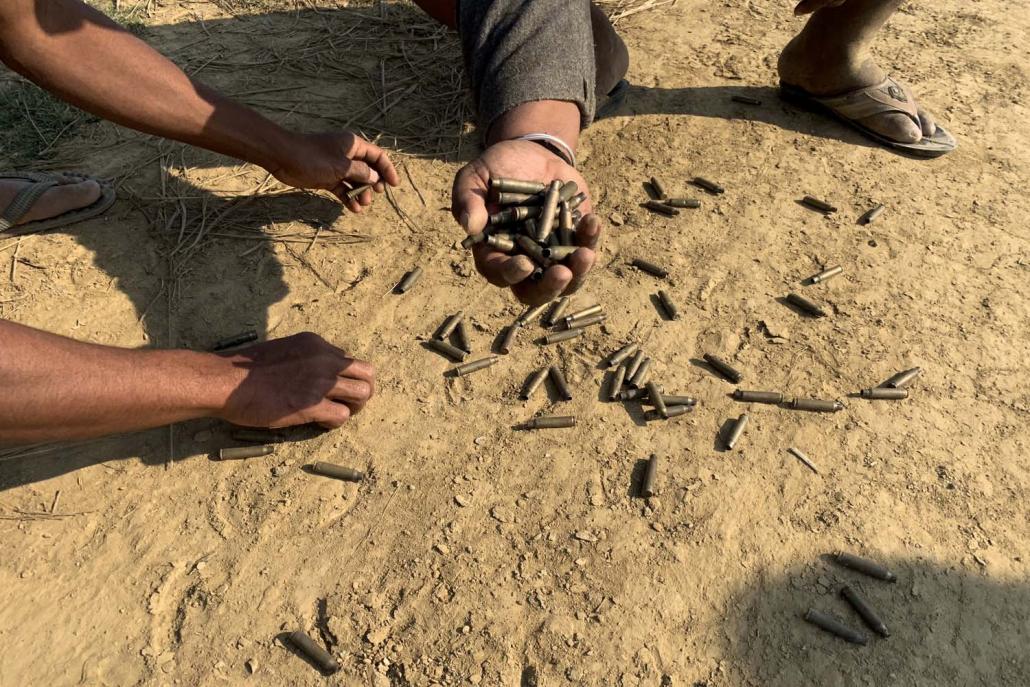 Residents hold bullet shells in a village in Rathedaung township, Rakhine State, after fighting between the Tatmadaw and Arakan Army in late January. (AFP)

The fighting on the ground in Rakhine is coinciding with battles in cyberspace as Rakhine, as well as Kachin, Shan and members of other ethnic nationalities, trade insults on social media with their Bamar compatriots. Even educated Rakhine, writing under their real names, are willing to get involved in these fierce online squabbles.

U Ko Ko Gyi, 88 Generation student leader and chairperson of the People’s Party, referred to the cyber war when he discussed the fighting in Rakhine at an event in Yangon on March 20.

Citing the need to solve the conflict through political means, he said, “Lobby groups are spreading their voices to annihilate and crush. [Because of this], the tension between the groups is getting worse.”

Hatred towards the Bamar manifests itself in many ways in the state; some Rakhine refer to the Tatmadaw as the “Bamar Tatmadaw”. The animosity can be especially sharp in rural areas. During the recent visit to Mrauk-U, some of the Rakhine whom Frontier approached to interview refused to speak in Burmese.

Anti-Bamar sentiment is clearly evident in Mrauk-U, the former capital of the once prosperous Arakan kingdom conquered by the Bamar Konbaung dynasty in 1784.

Residents of other Rakhine townships have mainly expressed support for the AA on social media, but in Mrauk-U some citizens have displayed small Rakhine flags in front of their houses. Despite a warning from the state government that action would be taken against those displaying the flags, they can still be seen on some houses.

Residents were infuriated and tensions worsened in Mrauk-U after some of the town’s historic pagodas were damaged by artillery fire on March 15.

The AA and the Tatmadaw have each denied responsibility for the damage.

At a high-level security meeting in Nay Pyi Taw held to discuss the January 4 attacks, the Tatmadaw was ordered to “crush the terrorists”, the Tatmadaw later claimed in a press conference. Asked at a subsequent press conference, held on February 25, why the Tatmadaw had yet to defeat the AA, Brigadier General Zaw Min Tun said it was because “the Arakan Army is our ethnic brother”.

The Tatmadaw campaign was initially focused on temporary camps the AA had established in remote areas but the armed group’s guerilla tactics inflicted heavy casualties on government forces. However, few details have been disclosed on the extent of the losses.

There are unconfirmed reports that Tatmadaw soldiers began refusing orders to fight the AA in rural areas, which is a possible reason why the AA was able to take the fight to the towns.

One consequence of the fighting and the heavy-handed treatment by government security forces of villagers suspected of sympathising with the AA has been the paralysis of local government in parts of Rakhine.

On March 1, nearly 100 village-level General Administration Department officials resigned en masse to protest the arrest of four counterparts, who were detained while attending a GAD meeting in Mrauk-U. The four were suspected of breaching the Unlawful Associations Act, for which the maximum penalty is three years’ imprisonment.

The Mrauk-U township administrator refused to accept the resignations, saying they needed to be submitted individually. After negotiations resulted in the release of the four detained officials on March 8, without charge, the village-level officials decided to submit individual resignations.

“The problem is we do not know whether they [government] will arrest our men in the future,” a 32-year old village tract administrator told Frontier.

Many village-level officials complain of coming under pressure from both the AA and the Tatmadaw.

“We are afraid of both sides,” a village tract administrator who asked not to be named told Frontier.

In December and January the AA sent threatening letters to some village tract administrators that told them to “cooperate” and warned against working for the government.

Some village-level officials have been killed and others have disappeared, including the administrator of Than Chaung village tract in Kyauktaw, former pastor U Tun Nu, who was taken from his home by unknown men on the night of January 19.

His wife, Daw Sandar Phyu, told Frontier she had no idea who had taken her husband, but that were wearing “speckled uniforms”.

Two men detained by the AA at Paletwa in Chin State on February 22 were more fortunate. The village tract administrator and its police chief were released a few days later.

TOP PHOTO: A Buddhist temple at Mrauk-U in Rakhine State. Once the capital of an independent Arakan kingdom, the town was last week the scene of clashes between the Tatmadaw and Arakan Army. (Hkun Lat)