Rakhine State residents at the mercy of the elements

A shortage of storm shelters and a lack of evacuation plans have left thousands of vulnerable Rakhine State residents living in fear at the arrival of the rainy season.

CYCLONE MORA left a trail of destruction across central and northern Rakhine State a year ago. Among its victims was Daw Mo Ni Ra Begum, 52, who recalls being woken by the sound of violent gusts and torrential rain on the night of May 30, 2017. Soon after, the tin roof was torn from the bamboo hut where she lived with her children and grandchildren at the Thet Kay Pyin IDP camp on the outskirts of Sittwe.

“We had nowhere to go. We huddled in our shelter and waited, rain pouring down on us,” she told Frontier in a recent telephone interview.

One year on, the residents of villages and IDP camps along the Bay of Bengal in Rakhine are dreading the arrival of the monsoon, which is expected to peak within the next few months.

“People are frightened,” said U Noor Alom*, 33, an IDP and community leader at Thet Kay Pyin camp. “Our shelters are not strong enough to withstand strong winds,” he told Frontier.

Thet Kay Pyin is home to 8,797 of the 101,547 people living in 15 camps or with host families in Sittwe Township out of a total IDP population in Rakhine of 127,574, showed figures released in March.

Coastal Rakhine is at risk from tropical cyclones, earthquakes, floods and tsunamis. Last year, destructive winds and rain from Cyclone Mora reached 12 out of 17 townships in the state. Roads, houses, schools and religious buildings were destroyed, but IDP camps suffered the worst damage. Thousands were left without shelter or potable water.

“The police came to the camp the next day to take photos of the damaged shelters. One day later the international aid agencies came,” Noor Alom said. “This year there are fewer aid agencies here. If there are problems, if our shelters collapse, who will help us?”

The Rohingya Muslims confined to IDP camps and rural villages since communal violence erupted in Rakhine in 2012 “have had little choice but to depend on humanitarian assistance”, said Mr Pierre Peron, spokesperson for the United Nations Office for the Coordination of Humanitarian Affairs in Myanmar.

“In the displacement camps and rural Muslim communities in central Rakhine we are mostly talking about people who are stateless, who don’t have unfettered freedom of movement, who have limited access to essential services such as health and education,” Peron told Frontier.

“These ongoing restrictions reinforce the marginalisation of communities and increase their vulnerability to humanitarian crises, including natural disasters,” he said.

In northern Rakhine, the situation has been exacerbated by a government ban on access for most humanitarian organisations since late last August, when a Tatmadaw clearance operation in response to Arakan Rohingya Salvation Army attacks resulted in nearly 700,000 Rohingya fleeing to Bangladesh.

The access ban also affected the work of aid agencies elsewhere in Rakhine, forcing them to sharply reduce the size and scale of assistance to IDP camp residents.

“After August, international aid staff were not granted access to the camps for three months,” an employee of a non-government humanitarian organisation told Frontier on condition of anonymity.

“A new procedure was handed down by the Rakhine Coordination Committee in November, making it compulsory for us to re-request travel authorisation for our staff, including Myanmar nationals, every two weeks,” the aid worker said.

Although a monthly system was reinstated in late April, delays in responding to travel permission requests remain common because of increasingly complex, and often opaque, restrictions, the aid worker said.

“If there is a disaster, bureaucratic blockages on aid organisations will not be easily overcome. A slow response is the price you’ll pay,” Mr Gregory Gottlieb, a former senior humanitarian officer with the United States Agency for International Development in Washington told Frontier.

After Cyclone Nargis devastated the Ayeyarwady Delta in 2008, Gottlieb was involved in negotiations aimed at persuading a reluctant military government to lift its objections to a massive international relief operation.

“In my assessment, the government’s dual strategy – cooperating on disaster preparedness while obstructing humanitarian relief in conflict areas – still puts Burmese lives needlessly in danger,” Gottlieb wrote in a commentary for The Conservation website on May 4.

The strategy “weakens the advancements that the country has made on disaster risk reduction over the past 10 years”, Gottlieb, now director of the Feinstein International Center at Tufts University in the US, told Frontier.

However, USAID says Myanmar has made considerable progress in understanding, managing and reducing disaster risk in the decade since Nargis struck.

“Ten years ago, Myanmar did not have much in the way of a formal disaster management agency or system. They didn’t have radar stations. They weren’t tracking storms. And, they weren’t tapped into regional and global networks,” said Mr Harlan Hale, the Indonesia-based regional adviser for USAID’s Office of Foreign Disaster Assistance. “They have developed all of that since. It’s like night and day between 10 years ago and now,” he told Frontier.

The improvements over the past decade include infrastructure such as radar stations to monitor meteorological conditions, GPS stations to detect earth tremors, and measuring stations for tides and river levels.

But management practices have also improved. Government and non-government organisations interviewed by Frontier commended the passing of a Disaster Management Law in 2013 and the establishment in Nay Pyi Taw the following year of a central command system known as the Emergency Operation Centre.

They also praised the Myanmar Action Plan for Disaster Risk Reduction developed by the government in 2017 and the endorsement of a national building code in 2016 that regulates construction standards, including for storm shelters.

These developments mean that “on paper, early warning systems, evacuation plans and evacuation centres are in place country-wide, including in exposed areas in Pauktaw, Sittwe, Rathedaung and southern Maungdaw” in Rakhine, said a representative of a foreign aid organisation who asked not be named.

“There are no cyclone shelters here,” Noor Alom said of the Thet Kae Pyin camp. “Last year, during Cyclone Mora, most people took refuge with friends and family. A few people sheltered in temporary learning spaces,” he said. “But most people had nowhere to go. There will be a lot of suffering again this year if we do not have anywhere to evacuate to.” 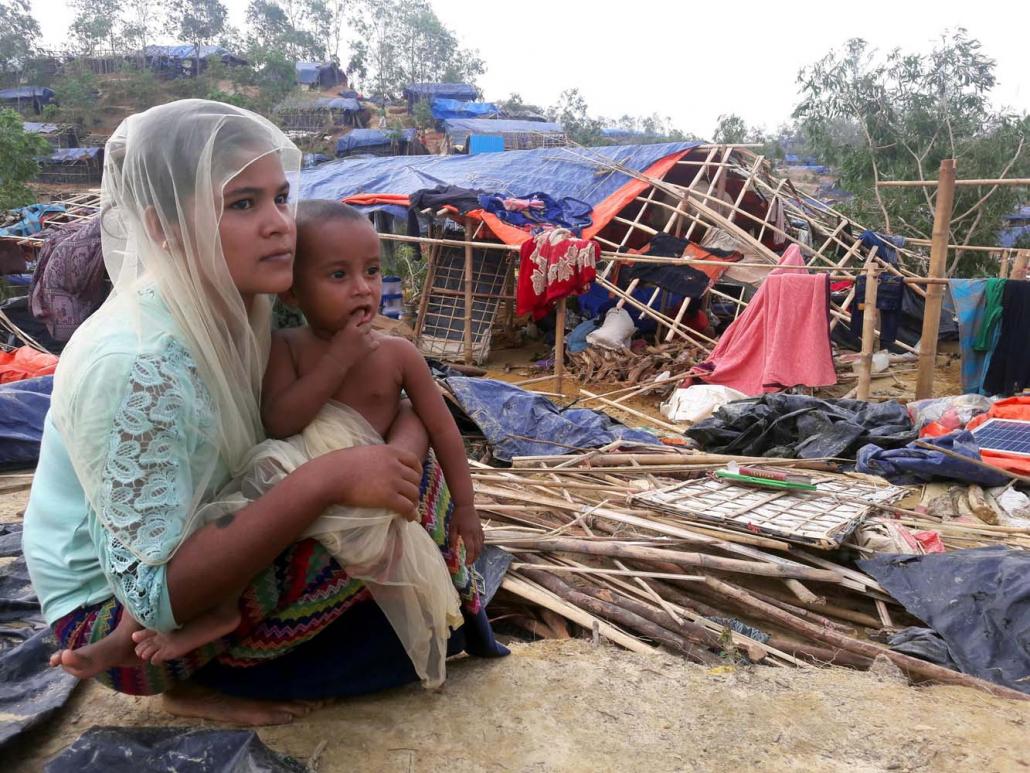 A Rohingya refugee sits near a house destroyed by Cyclone Mora in a camp in the Cox’s Bazar district on May 31, 2017. (AFP)

“Fifteen of 26 were contracted to tender winners in May. The remaining 11 are re-opening for tenders,” she said. “Rakhine state has already built six cyclone shelters in Sittwe, Pauk taw, Kyauk Phyu and Ramree and Ann”, with aid from the Bangladeshi government and Myanmar’s own National Disaster Management Committee, she added.

“The government has constructed some cyclone shelters, however, there are not enough to cover all communities at risk,” a repesentative of an INGO operating in Rakhine told Frontier.

In the absence of adequate cyclone shelters, humanitarian organisations have long pushed for evacuation plans for communities subject to movement restrictions, such as IDP camp residents or Muslim villagers. However, the INGO worker told Frontier it was unaware of any such plans, adding “at least none that we have seen”.

Peron said UN agencies and NGOs continue to be impeded by an increasingly complex bureaucracy “that is seriously curtailing our ability to assist people in the displacement camps and in rural communities”.

“This got worse after August 2017 and has affected ongoing humanitarian projects and planned assessments,” he said.

UNOCHA, which runs an annual workshop on disaster preparation and response in Rakhine, said “there are a number of locations in disaster-prone areas in Rakhine and Ayeyarwady where there aren’t sufficient numbers of cyclone proof shelters, or where evacuation plans are not in place or are unclear”.

As long as movement restrictions are enforced, it is imperative that the government facilitates the provision of humanitarian aid, including through its UN and NGO partners, said UNOCHA.

“In recent years, the authorities have set up fast-track mechanisms for travel authorizations to allow humanitarian staff to quickly deploy to disaster-affected areas to assess and respond to humanitarian needs,” said Peron.

“This will be essential if disaster strikes again, whether in Rakhine State or anywhere else in Myanmar. Natural disasters do not make a distinction between borders, ethnicities, and citizenship status. Neither should we.”