Rakhine in the dark: life after the internet blackout

Livelihoods, border trade and aid for victims of armed conflict have all been hampered by the mobile internet blackout imposed in areas of Rakhine and Chin states.

THE MOBILE internet shutdown imposed in northern and central Rakhine State on June 21 is affecting money transfers, banks, border trade, the livelihoods of farmers and efforts to relieve communities displaced by continued armed conflict, according to multiple sources.

The sudden shutdown, an apparent response to intensifying conflict between the Tatmadaw and the Arakan Army since late last year, was ordered by the Ministry of Transport and Communications under section 77 of the 2013 Telecommunications Law, which allows for services to be suspended in an “emergency situation”.

The grave impact of the move on social and business communications has been condemned by Rakhine State lawmakers, some of whom have raised concern that it would enable human rights violations to be covered up. There have also been accusations that the Union government was forced to pull the plug because of pressure from the Tatmadaw, which the latter has denied.

Voice calls and SMS are excluded from the mobile internet shutdown, which affects eight Rakhine townships – Maungdaw, Buthidaung, Rathedaung, Ponnagyun, Mrauk-U, Kyauktaw, Minbya and Myebon – as well as Paletwa Township in neighbouring Chin State. The townships have a total population of just over 1.1 million, according to the 2014 census.

The shutdown took effect at 10pm on June 21 and mobile phone operators informed customers in the affected area of the move by SMS.

The directive, which does not say when normal services will resume, was ordered to ensure the rule of law and stability in northern Rakhine, said U Myo Swe, chief engineer of Myanma Posts and Telecommunications, which is under the communications ministry.

“The ministry direction appeared after the Union Government agreed to suddenly shut down the internet connection in [the nine] townships. The service might be restored after the area is stable and peaceful,” he told Frontier on July 9.

Among those most affected by the shutdown are the tens of thousands of residents of camps for internally displaced persons, or IDPs, in northern and central Rakhine. Figures released by the Rakhine Ethnic Congress on 10 July show that more than 51,957 civilians have been displaced by the recent fighting in the state. Most are of Rakhine ethnicity, with some belonging to smaller groups such as the Mro and Khami.

The REC and administration officials in Buthidaung and Maungdaw townships of northern Rakhine told Frontier that the recent fighting has displaced few Muslims. More than 700,000 Rohingya Muslims fled a Tatmadaw crackdown in 2017 and remain in refugee camps in Bangladesh, while more than 100,000 have been confined to IDP camps in central Rakhine since communal riots in 2012.

IDP camp residents are no longer able to access money transfer services, such as Wave Money, and the severed connection has also complicated the delivery of humanitarian aid by local civil society groups that lack the capacity of international organisations.

“We used to transfer money online because it was easy and fast, but now we can’t even arrange urgent transfers because of the shutdown,” said U Kyaw Hla Myint, a Rakhine activist who does volunteer work for Rakhine IDPs. 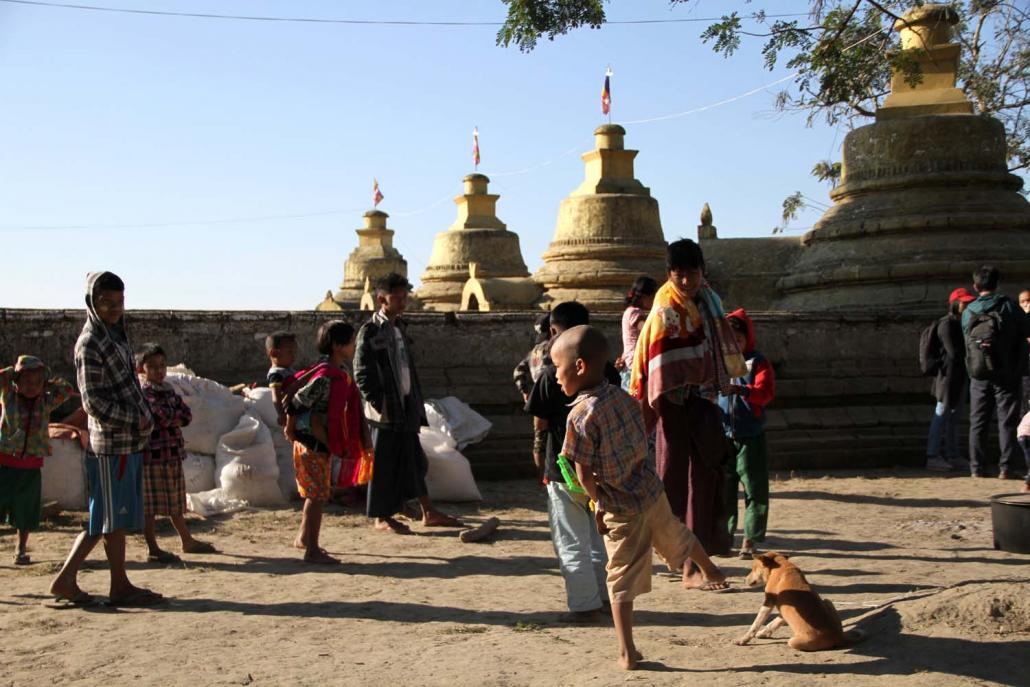 Ethnic Mro displaced from the surge of fighting between the Arakan Army and the Tatmadaw take refuge in the compound of a Buddhist pagoda on January 25. (AFP)

Volunteer groups that support Rakhine IDPs say the shutdown has also complicated the task of reaching out to donors.

“We used to seek help from donors by posting updates about the situation in IDP camps but that is no longer possible,” said U Tun Nu, a spokesperson for the Chit Thaung IDP camp in Mrauk-U Township.

“When we posted information about the needs of the IDPs on Facebook, thousands of people would see it, but with no internet we have to call the donors, which is more difficult,” he said.

The International Committee of the Red Cross, which provides humanitarian aid to conflict-affected communities in Rakhine, said it has been able to maintain regular services.

“The internet shutdown is currently not affecting ICRC’s regular humanitarian work. Most of the operations can be carried out with proper planning and with the use of normal phone calls with the civilian population,“ an ICRC spokesperson told Frontier on July 10.

Traditional banking services have also been affected by the shutdown. U Ba Thein, the manager of the Mrauk-U branch of Global Treasure Bank said transactions had been delayed. “After the connection was shut down we sent our employers to Sittwe to process transactions; we have been working until 5pm or 6pm for the convenience of our customers,” he said, adding that having to conduct services through Sittwe was exacerbating the delays.

The KBZ and Myanma Economic Bank branches in Mrauk-U were closed after fighting near the historic town in April.

Some businesses in northern Rakhine involved in border trade with Bangladesh have been able to circumvent the shutdown by using SIM cards from the neighbouring country, but coverage is limited to a “very small” area near the border, said U San Thein, general secretary of the Maungdaw Township Border Traders Association.

“We had been using social media to display detailed samples of goods to be traded but now we are [less able] to do the checks,” said San Thein.

Another consequence of the shutdown, which may have been intended, is the increased difficulty faced by journalists and others in trying to report as soon as possible when clashes erupt between the Tatmadaw and the Arakan Army, which is fighting for greater autonomy for the state’s Rakhine population.

“Our journalists in affected townships cannot send video and recording files online, which has delayed their reporting a lot,” said Phadu Tun Aung, a reporter with Development Media Group, a news agency based in Sittwe.

The shutdown has not affected Sittwe, but Phadu Tun Aung said reporters in affected townships were now sending or carrying memory sticks containing video and audio files to the state capital. Some reporters in Maungdaw were able to file by using Bangladeshi SIM cards but these were only effective in areas right by the Bangladesh border.

He said reporting on a recent funeral in Mrauk-U of two people who had died after being detained by the Tatmadaw had been hampered by the shutdown because it had prevented the timely transmission of images that would have powerfully illustrated the grief of relatives of the victims.

“The internet shutdown has caused big disturbances for Rakhine-based journalists because as well as relying on it to post the news, the internet was used to quickly confirm information from sources, including those in areas where clashes occurred,” Phadu Tun Aung told Frontier.

The shutdown ordered by the Union government and its impact on communicating with constituents has infuriated many lawmakers in Rakhine, including members of the Arakan National Party, which holds most of the elected seats in the state hluttaw.

An outspoken critic of the ban is a state ANP MP, U Tun Than Sein (Mrauk-U-1), who has described the shutdown as amounting to a violent denial of the right to access information for members of the public, who rely on the internet to keep in touch with lawmakers.

“The way in which the internet was shut down has also affected public trust in the government,” Tun Than Sein told Frontier. 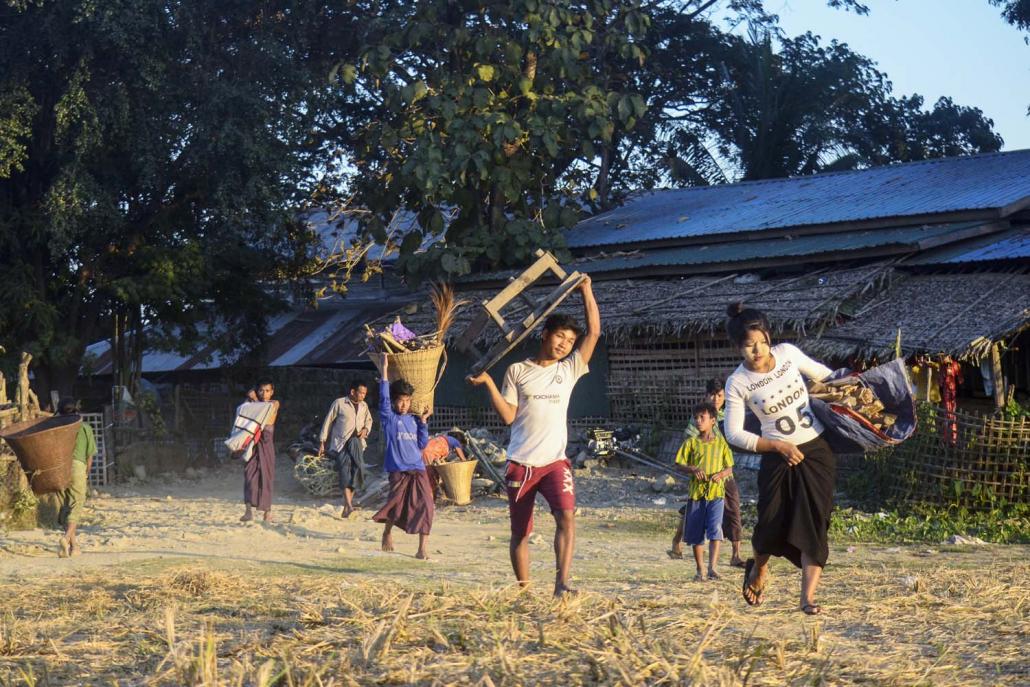 People displaced by violence between the Arakan Army and the Tatmadaw arrive at a camp in Kyauktaw on January 4. (AFP)

On June 24, the Rakhine Hluttaw accepted a proposal by U Hla Aung Thein (ANP, Minbya-1) that called on the government to restore mobile internet services.

Hla Aung Thein was quoted as saying that communities in affected areas were bearing the brunt of the fighting between the Tatmadaw and the AA and that shutting down the internet would encourage human rights violations and violence.

The state government – whose members were appointed by the National League for Democracy, which has a tense relationship with the ANP – said in a letter to the state hluttaw that it backed the resolution and would communicate the demand to the Union government, which ordered the shutdown.

“We hope that the Union government will take action [according to this demand] because the internet is absolutely essential for business, social communications and the public’s access to information,” he said.

The accusations that the government had acquiesced to the Tatmadaw in ordering the shutdown were fuelled by the observation that, before the shutdown, Tatmadaw supporters had written Facebook posts calling for the plug to be pulled in areas where the AA was active.

The Tatmadaw supporters alleged that residents in affected areas were providing information to the AA to support its operations against government forces.

“No internet connection means it’s easy for the government to violate human rights and act contrary to the law, because there’s little transparency,” said U Tun Aung Kyaw, general secretary of the ANP.

“We have heard about many cases involving the Tatmadaw since June 21 but they received little publicity because of the shutdown,” he said.

Tatmadaw spokesperson Major-General Zaw Min Tun said to Frontier on July 8 that the Tatmadaw had played no role in the decision to shut down the internet in the nine townships.

“It was shut down according to the process of the government and there was no request from the Tatmadaw to do so,” he said.

The AA says it has clashed more than 400 times with the Tatmadaw since the conflict escalated late last year, including fierce simultaneous battles in Rathedaung, Kyauktaw and Minbya townships on June 30.

Food security is worsening in what is already one of the country’s poorest and least developed states or regions. The Arakan State Farmers’ Union says about one million acres of land used to grow paddy has been left idle because of the fighting.

TOP PHOTO: A woman displaced by violence between the Arakan Army and the Tatmadaw walks with a child at a makeshift camp in Kyauktaw on January 5. (AFP)