Brokers acting as proxies for Chinese and Thai companies are buying large tracts of farmland around a village in Kayin State where the Democratic Karen Benevolent Army has its headquarters.

IN A remote village in Kayin State’s Myawaddy Township, not far from the border with Thailand, corn farmer Naw Hay Thar Mu, 52, was excited as she tidied the compound of her home a day ahead of two special events.

Hay Thar Mu lives in Sone Si Myaing village, almost five hours’ drive from the town of Myawaddy. The village is the headquarters of the Democratic Karen Benevolent Army, an ethnic armed group that originated in a largely Buddhist faction that broke away from the Christian-dominated Karen National Union in 1994 and joined forces with the Tatmadaw.

The events were celebrations marking the 25th anniversary of the DKBA, on December 21, and the Karen New Year.

Hay Thar Mu stopped work on her farm for three days for the celebrations, which included nightly performances at the village market of the traditional Myanmar drama known as zatpwe, performed in the Karen language. She was looking forward to the zatpwe because it’s only performed in the village once a year.

The houses in Sone Si Myaing are simple; most have neither doors nor windows. There is no government electricity supply but some houses use solar power for lighting. Residents said land was cleared for housing when the village, near the Thaung Yin River that forms the border with Thailand, was established with 24 households in the 1990s. It has since grown to more than 100 households.

When the the Democratic Karen Buddhist Army, the forebear of the present-day DKBA, established its headquarters in the village in 1994 after breaking away from the KNU, it allocated land for use by its troops. The original inhabitants remained in their residential compounds measuring 10,000 square feet (920 square metres), which they own. Soldiers deployed at DKBA headquarters are allocated residential compounds of 2,500 square feet, with officers of the rank of major and above living on compounds of 10,000 square feet.

Hay Thar Mu lives in one of the larger compounds because her husband is a DKBA officer. 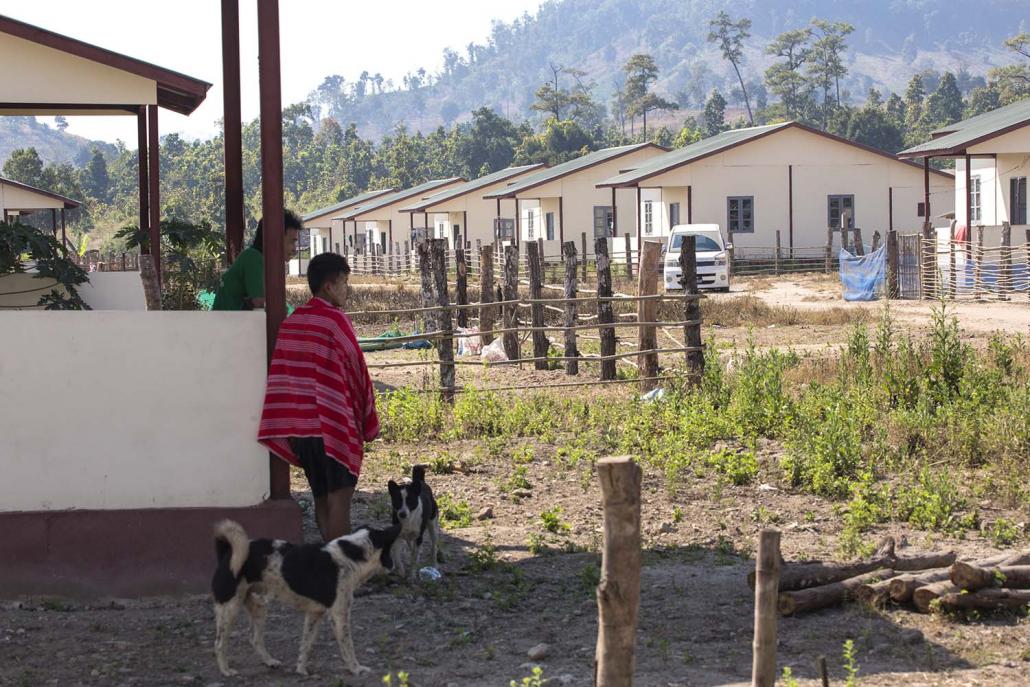 A Chinese construction company is said to have built these small homes in Sone Si Myaing, near the DKBA headquarters in Myawaddy Township. Chinese and Thai investors are increasingly also buying land in the area. (Zay Yar Min | Frontier)

Most battalions of the Democratic Karen Buddhist Army joined the Kayin State Border Force under Tatmadaw command in 2010. However, one faction refused to join the new BGF. Branding itself the Democratic Karen Benevolent Army, it switched its allegiance back to the KNU and fought with the Tatmadaw until a bilateral ceasefire was signed the following year. The rebranded DKBA became one of the eight initial signatories of the Nationwide Ceasefire Agreement in October 2015. The ethnic armed group operates mainly in Myawaddy, Kawkareik and Kyainseikgyi townships in Kayin and Kyaikto Township in neighbouring Mon State.

The DKBA’s Commander-in-Chief General Saw Mo Shay, who is based at DKBA headquarters, was appointed to the position after his predecessor, General Saw La Bwe, died in 2017.

Hay Thar Mu said traders based in Thailand and China had begun renting farmland in 2012. The area is mainly used to grow corn and sesame, and village residents have been entering into informal contracts to supply the traders with all they grow. The villagers liked this arrangement because they did not have the money to invest in their farmland, she said.

“The Bamar representatives of Chinese and Thai traders came and offered to provide technical support and farming equipment free of charge as long as we sell them all that we grow,” Hay Thar Mu told Frontier. “Some villagers sold their land to Chinese and Thais and were employed by them to farm the land.”

Hay Thar Mu said the villagers received an advance payment for their crops, which they appreciated because it minimised the risk of suffering a loss.

“I have three acres of farmland near the village; in the past I had to borrow money to cover the cost of growing crops but because of the pre-payments I don’t have to worry about that anymore,” she said. 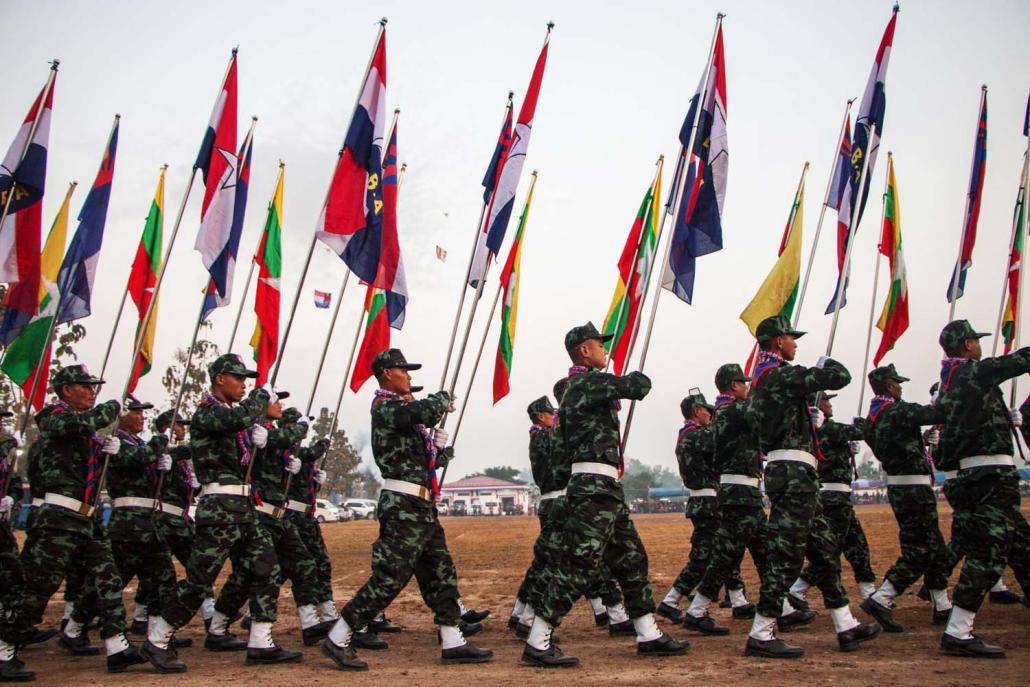 However, problems have emerged because relying on informal contracts makes it difficult to resolve any disputes that may arise between growers and the brokers acting on behalf of Chinese and Thai traders.

DKBA spokesperson Major Saw Zaw Min said the armed group does not interfere in the relationship between the villagers and brokers.

“Farming issues are not our concern and we do not become involved,” he told Frontier.

“The brokers for Chinese and Thai traders began appearing in the area to promote the advance payment system about five years ago after the road to the village was upgraded,” Zaw Min said.

“The Chinese and Thai traders are relying on brokers to make contact with the local people,” he said.

Village resident Saw Phoe Aye said some of the brokers had bought land as proxies for “Chinese traders”.

Farmland around the village is cheap. A 10,000 square foot plot sells for about K150,000 (about US$100), he said, adding that in the absence of registration documents, the villagers demarcate their plots with fences.

“The brokers buy the land from locals at very cheap prices and have acquired large holdings; we heard that the original owners are from China and they plan to establish a housing project on farmland,” Phoe Aye said. 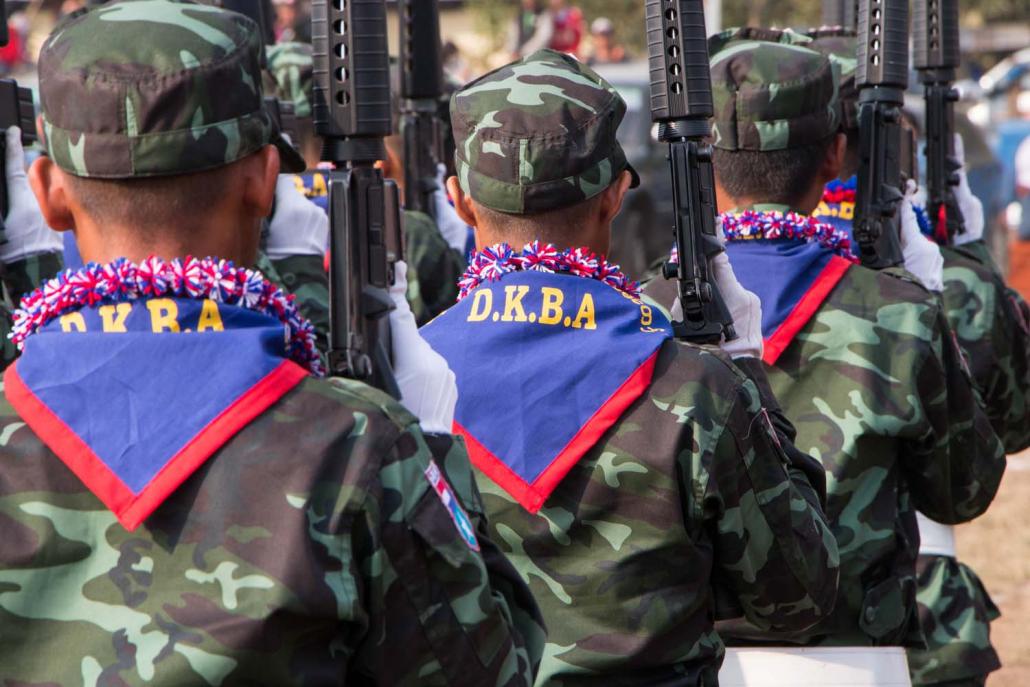 Zaw Min dismissed as rumour a claim that Chinese were buying large tracts of farmland in the area. The ownership of land cannot be transferred without informing the DKBA’s information committee, he said.

However, Chinese investors have apparently built cheap housing in the village near DKBA headquarters. A total of 10 houses have been built, all of which were used as offices for the 25th anniversary celebrations.

A DKBA soldier, who requested anonymity because he was not authorised to speak to the media, said a Chinese construction company built the houses, on plots measuring 10 feet by 25 feet. The houses were to be sold after the celebrations.

“I heard that the selling prices for the houses is K1.5 million each,” he said. “They were built as a pilot project by the Chinese company.”

TOP PHOTO: DKBA soldiers take part in a ceremony on December 21 to mark the 25th anniversary of the group’s founding. (Thuya Zaw | Frontier)