‘Pressure for tougher action is growing’: US ambassador Scot Marciel

MORE THAN a year after a Tatmadaw “clearance operation” sent more than 700,000 people fleeing into Bangladesh, the Rakhine crisis continues to cast a pall over Myanmar’s international relations. In response, the United States has levelled targeted sanctions against some senior military officials but stopped short of applying broader measures. US ambassador to Myanmar Mr Scot Marciel tells Frontier’s Thomas Kean that pressure for stronger action will grow unless Myanmar can show tangible progress on accountability for abuses and rights for the state’s Muslim Rohingya community.

The Rakhine crisis has obviously placed strain on US-Myanmar relations after several years of strong, warm ties. In this climate, how much more difficult has it been for you as ambassador to engage with the government?

I think we’re still able for the most part to talk, we always try to speak very openly with government officials, we always emphasise – when we’re talking about Rakhine or something like that – this is all about trying to help Myanmar overcome this challenge in a way that addresses the human and humanitarian crisis and also helps the country move ahead.

In these meetings, what arguments do you make to encourage the government to adopt a different response to Rakhine?

We say a couple of things. First, from a humanitarian issue point of view, the fact that so many people suffered, whether they were killed, the widespread rapes that have been reported, and of course the exodus of 700,000 people. The world is – rightly – deeply troubled by this. We recognise that the ARSA attacks triggered that security response and we’ve condemned ARSA but that doesn’t make that excessive and brutal security force response okay. So from a global and moral and human perspective, the world is insisting that this be addressed both in terms of accountability and justice, but also in terms of trying to improve the conditions on the ground in Rakhine State.

Secondly, this issue has unfortunately been discussed in terms of Myanmar versus the world. My view is that people worked so hard in Myanmar to bring about democracy, greater respect for human rights, and moves towards rule of law. We all know these things aren’t easy and take time. The Rakhine crisis is a great setback for Myanmar, not only in terms of how the world views it but in terms of prospects for improved human rights and justice and democracy in this country. So for Myanmar’s own sake in building a democracy it’s important that it address the human rights violations and that there is some accountability and justice. We think it’s essential for the future of Myanmar.

The third point we make is that … we also recognise that creating the conditions in Rakhine for all communities to live in harmony is very difficult. It’s going to take time. It can’t just be done via a proclamation from Nay Pyi Taw … And we really want to help, and we – and I think others in the international community – are more than ready to help any way we can with sharing experience, technical assistance, this sort of thing. But what we’re looking for is some tangible progress.

I think two things. One, some clear indication on the accountability side that this commission of enquiry [appointed by the Myanmar government in August, with mixed foreign and Myanmar membership, to probe alleged human rights violations in Rakhine State] is going to be able to do its work credibly and produce a result that’s credible to the people of this country and the world.

Second, in terms of really going back to implementing the recommendations of the advisory commission that Kofi Annan led, there’s a whole range of things that could be done. The government has focused on some infrastructure, I think there’s been a little bit of progress in education and health and that’s good, but really no progress in terms of the rights for the Muslim community. Basic freedom of movement, access to health and education, legal status – whether citizenship or some other legal rights – there’s been really almost no progress on that front.

The government says it has made far more progress implementing the commission’s recommendations than you seem to be suggesting. Why do you think the government is so clearly overplaying how much has been achieved so far?

I can’t really say why they are doing that. Certainly they feel like they’ve put a lot of effort in. There’s a lot of time being spent on this, a lot discussion, a lot of energy being burned in Nay Pyi Taw by a lot of people who I think are trying to address things. For a variety of reasons they haven’t been able to translate that into much progress on the ground.

If we go to Muslim villages in Rakhine, or the IDP camps, do we see that there are expanded rights for people? Unfortunately, so far, the answer is no.

What’s your assessment of the process the government is employing to close those IDP camps?

So far it’s not meeting international standards. We’ve stressed to the government, we want you to succeed in your goal of closing these camps, but it’s really important that it be done in a way that actually improves the lives of the people.

What we’ve seen so far is the camps are technically closed but the residents of those camps are moved to other areas where they have no more freedom of movement or access to services than they had before, so their situation has changed but it hasn’t improved. What we of course want to see is that the movement out of the IDP camps corresponds to an increase in their rights and an improvement in their living situation. 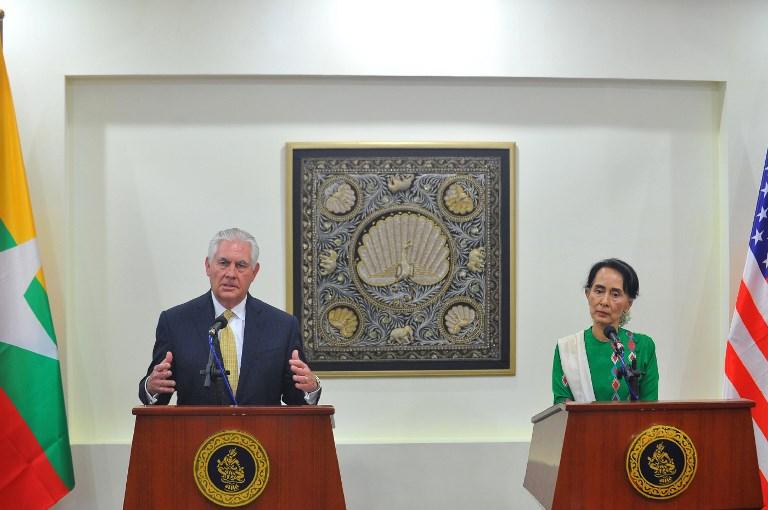 US Secretary of State Rex Tillerson talks to the media with State Counsellor Daw Aung San Suu Kyi during a press conference in Nay Pyi Taw on November 15, 2017. (AFP)

On sanctions, the US has said it only intends to consider targeted measures. Is that still the policy and should Myanmar expect further sanctions, including against military companies, from the US?

The goal is to try to take action, including through targeted sanctions against individuals and entities directly involved in human rights abuses. The goal is not to punish, but to encourage progress. That said, going forward, much will depend on whether there is progress. The level of concern remains extremely high. Arguably, pressure for tougher action is growing and the way to reduce that pressure is to show progress, which is what we’d all love to see.

To what extent do you think sanctions can actually change behaviour? You said it’s not about punishing, but if it’s not going to change behaviour isn’t it just punishment at the end of the day?

I think it’s meant to be a step towards accountability … to highlight individuals who were directly involved in abuses and so in that sense I think there’s a certain element of punishment there. But what I meant more is that it’s not meant to be a punishment against the country as a whole.

I think the targeted sanctions are helpful in terms of sending a clear message of seriousness in identifying individuals. But what’s really more important is to try to persuade the country as a whole – and I mean not just the government, but the public – to take another look at this crisis and step back and acknowledge the facts that I think have been increasingly compiled, but also see that it’s doing great damage to the country and that it’s important for the country to address it so it can move ahead. That’s really the goal here and sanctions are one tool that you can use.

A lot of questions have been raised as to why Senior General Min Aung Hlaing and military companies have not been sanctioned. Is that because of a desire to keep engaging the military?

Everything we’ve done is based on what we think has the best chance of helping. Something that might be tempting on the surface might bring unintended consequences. We look at everything we do in that light. For example, if you sanction military-owned companies, what are the implications for the rest of the economy? Because those companies are fairly well integrated into the broader economy … and the desire is to avoid causing damage to the overall economy because then you’re hurting, you know, melon farmers in Sagaing or construction workers in Yangon, and we don’t want to do that.

So, those are the things we look at, the costs and benefits. But what I can say is that all these options are still going to be considered going ahead, particularly in the absence of progress.

When Matt Pottinger, the senior director for Asian Affairs at the National Security Council, visited Myanmar in June he made a point of publicly encouraging US companies to continue investing here despite the Rakhine crisis. It’s clear though that there’s very little interest. Is that only because of Rakhine?

I think overall the combination of less-than-expected economic reform and things like the Rakhine crisis have done damage to the Myanmar brand. It’s a less attractive brand than people expected it would be a few years ago. The good news is that can change: it doesn’t have to be a long-term or permanent factor.

You’re approaching the end of your term as ambassador. Will there definitely be a successor? Is the US considering not appointing a replacement for a period of time in response to what’s happened in Rakhine?

No, I have not heard that at all.

What advice would you have for whoever takes over?

One – like anywhere – learn as much as you can about the history, and two, although we’ve understandably been focused on Rakhine, it’s a big country – it’s important to get out and travel. Everywhere I travel in this country I meet incredible people who are doing amazing work to help their communities advance: some in business, some in NGOs, some in government, some in the press. The inevitable disappointments that come with the Rakhine crisis or other setbacks you can balance with seeing all these amazing people showing their dedication and their energy.