Constant fighting and a mysterious deadly bombing at a bank have seen peace hopes crumble among residents of the nation’s biggest state.

AN UPSURGE of fighting and the deadly bombing of a bank have further eroded trust in the peace process among residents of multi-ethnic northern Shan State.

The Lashio branch of Yoma Bank had just closed for the day on February 21, when a bomb placed against the building exploded, killing two women employees and injuring 22 passers-by.

The branch is about 100 metres from a police station and opposite a government building.

“I wasn’t at the bank that day but I am very sad about my colleagues, with whom I chatted every day,” said a security guard who spoke to Frontier on condition of anonymity, adding that the death toll could have been higher if the bomb had exploded before closing time.

“Only a few minutes before the bomb exploded there were two foreign clients visiting the bank,” he said.

A few weeks before the blast, the Tatmadaw distributed leaflets in Lashio warning that the Kachin Independence Army and Ta’ang National Liberation Army were planning a bomb attack. There was no claim of responsibility after the bombing.

“People know very well who it was but don’t dare say anything in public because they feel pressure from both sides, from the Tatmadaw and the ethnic groups,” said Lashio  resident Ko Mai Naing Naing Oo, 22.

“No matter who did it, they should consider that it is the people who suffer; they should face each other on the battlefield,” said Shan State MP Nang San San Aye (Shan Nationalities League for Democracy, Hsipaw-1).

Northern Shan and neighbouring Kachin State are among the areas where fighting has increased since the peace process began in 2011.

Non-signatories include two of the biggest armed groups, the United Wa State Army and the KIA. The KIA and its Northern Alliance allies, the Ta’ang National Liberation Army, Kokang-based Myanmar National Democratic Alliance Army and Kachin-based Arakan Army, have clashed often with the Tatmadaw in northern Shan since 2015.

In a daring coordinated operation in December 2016, the Northern Alliance attacked a number of targets in northern Shan, including Tatmadaw posts near the border trading town of Muse, leaving nine dead including soldiers and government officials.

Fighting stepped up in 2017

“We had battles and a lot of refugees this time last year and it’s a similar situation now,” San San Aye told Frontier, adding that about 500 people had recently sought shelter in around Kyaukme.

They had been displaced by fighting between the TNLA and the Shan State Army-South, the armed wing of the Restoration Council of Shan State, which signed the NCA in 2015.

The fighting can have unfortunate consequences for non-combatants, the MP said. 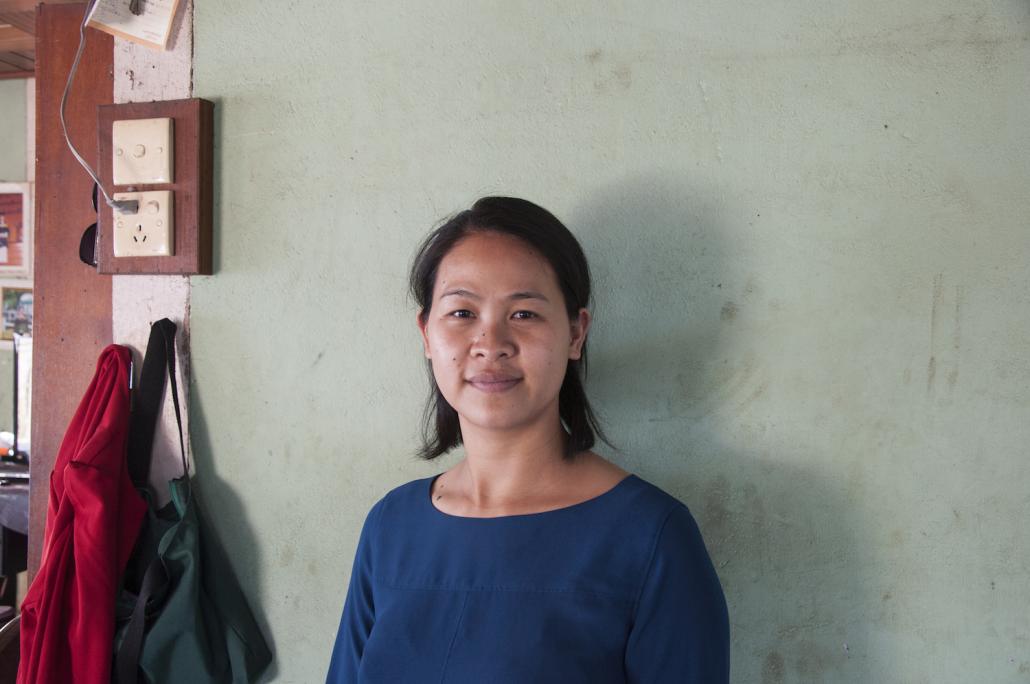 “They still prosecute people accused of being in contact with ethnic armed groups, even if the group signed the NCA,” she said.

The Lashio bombing was another setback for the peace process because it further undermined the trust among stakeholders, she said.

“If it goes on like this, people will lose trust completely in the peace process,” San San Aye said, adding that the rise in hostilities had coincided with a surge in narcotics production and the “drugs situation was worse than ever”.

The government needed to change its approach and attitude, she said.

“I expect the government to change its behaviour towards the people and communicate better, listen to the ethnic groups and create jobs by hiring local people,” Nang San San Aye said. She also urged stakeholders in the NCA to adhere to its rules.

The fighting has hampered development projects in northern Shan, delaying needed improvements in living standards, and is also affecting the local economy by disrupting farming activities.

“Before 2015, there was only fighting between the Tatmadaw and TNLA, but after the RCSS signed [the NCA], they came up here and started fighting the TNLA as well,” she said.

The headquarters of the RCSS is across the other side of the state, at Loi Tai Leng in southern Shan, on the border with Thailand.

“In 2017 we compiled more than 100 cases of human rights violations, including torture, rape, and killings committed by all sides, but mainly by the Tatmadaw,” she said.

The fighting is disrupting livelihoods because farmers are afraid to visit land outside their villages because they fear land mines or being detained by the Tatmadaw.

“When they go to their farms, soldiers accuse them of being in contact with armed groups and detain them and torture them, even if they don’t have any evidence,” she said.

The drug abuse crisis is making the situation worse.

“In some Ta’ang villages near Lashio, there is not a single household unaffected by drug abuse,” she said, adding that there were reports of addicted parents selling children to human traffickers for between K200,000 to K500,000. 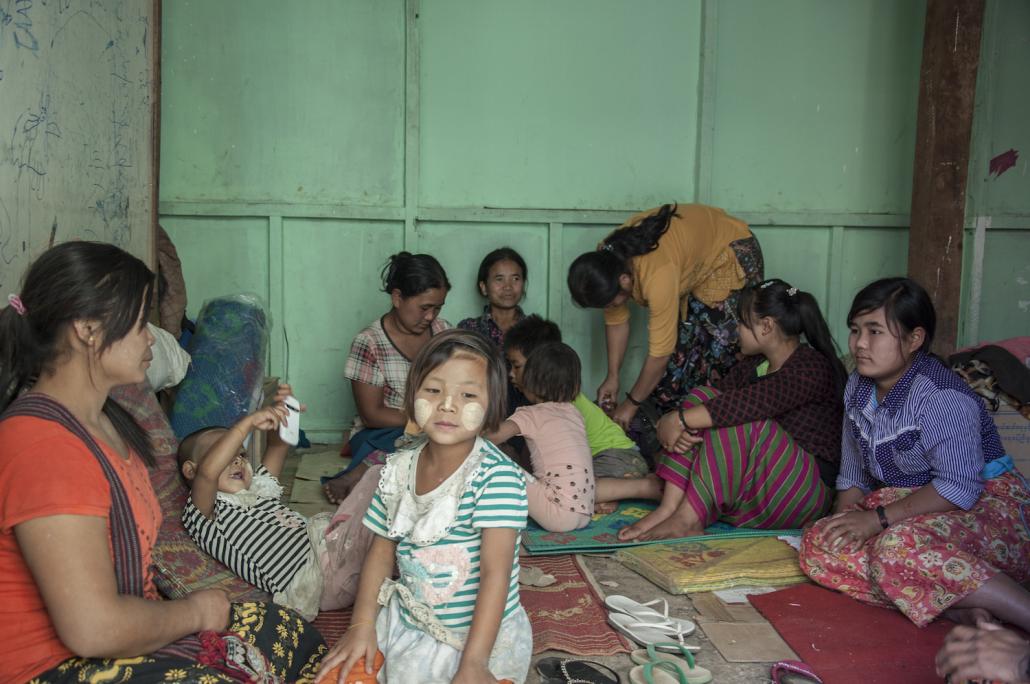 The worsening security situation combined with a drug abuse epidemic is making people lose faith in the peace process, said Lway Poe Jaing Kee. “The people long for peace, but when they see politicians discussing the peace process but not making progress, they get disappointed,” she said.

Lway Poe Jaing Kee said the best way to achieve an inclusive National Ceasefire Agreement would be to invite all groups to join the peace talks, including those whose participation has been blocked because they refuse to sign the NCA.

Fighting that erupted between the RCSS and TNLA in Kyaukme, Namkham and Namtu townships on March 10 has displaced hundreds of villagers and some have found shelter in Lashio.

According to the United Nations Office for the Coordination of Humanitarian Affairs, about 3,300 people fled the fighting but about 1,400 had returned to their homes, leaving nearly 2,000 displaced.

The displaced villagers were being accommodated at monasteries and other reception centres in five townships, said Mr Pierre Peron, spokesperson for UNOCHA.

Most of the displaced are women, children and the elderly, because many men prefer to stay in their villages to take care of their houses, he told Frontier.

“We can’t farm our fields while there is fighting,” a Ta’ang farmer who found shelter at a monastery in Lashio, told Frontier, adding that a bomb had exploded in the middle of his village on March 17.

Even is there was no fighting, life is difficult, said the farmer, who accused the military of stealing livestock and looting people’s homes. Three people who had been detained by the Tatmadaw had disappeared, he said.

The fighting in March also displaced Kachin living in northern Shan, with members of the ethnic group comprising more than half of about 100 people who have sought refuge at the Western Kachin Public Church in Lashio.

A member of the church told Frontier the worsening security situation had also made him doubt whether the peace process can succeed.

“Shan-State is like a country of its own,” said the church member, who requested anonymity. “If peace is established here, there will be peace in the whole country, but at the moment we are not on the way there yet.”

A Kachin village leader said the Tatmadaw had clashed with the TNLA on March 7 and the fighting had escalated to battles between the TNLA and RCSS a week later, preventing farmers from tending their land and forcing them to flee.

TOP PHOTO: The destroyed interior of the Yoma Bank branch in Lashio, which was bombed in January (Katrin Schregenberger | Frontier)