Hundreds of delegates from the government, military, civil society and ethnic armed groups have gathered for the opening of the Second 21st Century Panglong peace conference, amid a last-minute boycott by members of a key peace negotiating bloc.

State Counsellor Daw Aung San Suu Kyi commenced Wednesday’s proceedings by urging the country’s citizens to work together in order to end seven decades of fighting in the country.

“We have now reached the state where we are able to discuss the basic federal principles that are so important for our country and our people,” she told a packed hall of ethnic minorities, diplomats and military officers in Nay Pyi Taw on Wednesday morning. “Together we are embarking on a new chapter in our history that will help us to realise the long-held aspirations of our people.”

She added that most people involved in the peace process agree that the key is a “federal system that is acceptable for all”, and urged all citizens to work together to achieve that aim.

The second UPC, which is expected to last for five days, is expected to have more substance than the first event, which was held in August and September last year and was largely regarded as symbolic.

But Myanmar’s peace process, which was given a new initiative under former president U Thein Sein, has suffered several setbacks since the recent conference.

The Tatmadaw has been in almost constant conflict with the Kachin Independence Army, and in November a new layer of complexity was added to the peace process when a coalition of armed groups calling itself the Northern Alliance launched offensives on Tatmadaw outposts in northern Shan State. 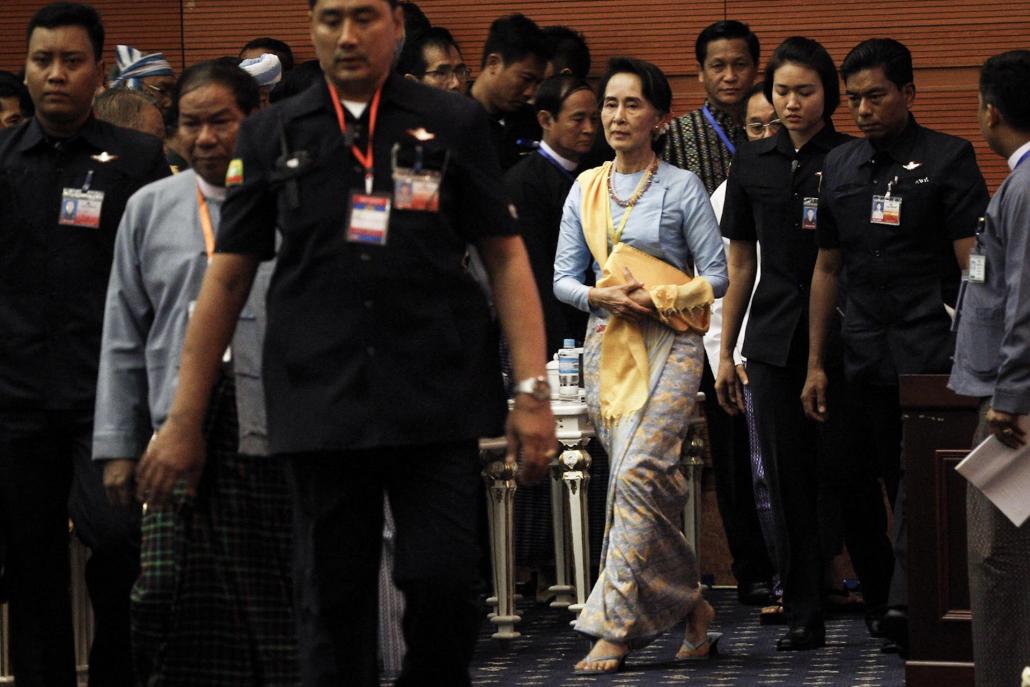 Since March, there has been intense fighting between the Tatmadaw and the Myanmar National Democratic Alliance Army in Shan State’s northeast, with the military reported to have suffered severe losses.

Elsewhere, the United Nationalities Federal Council, a negotiating bloc of armed groups that did not sign the Nationwide Ceasefire Agreement in October 2015, announced its members would not be attending the conference on Tuesday.

Following an executive committee meeting of the UNFC in Chiang Mai, Thailand earlier this week, the bloc said the government’s decision to relegate its members to observer status was unacceptable.

Government officials have yet to comment on the UNFC’s absence.

Despite rising criticism over the state of the peace process, the State Counsellor remained upbeat about the conference’s prospects.

“Our collective efforts have started to bear fruit. We have now reached the stage where we are able to discuss the basic federal principles that are so important for our country,” she said.

Non-signatories the TNLA and the United Wa State Army sent a delegation to attend the first day of the event, and members of the group told Frontier they were undecided whether they would attend the rest of the conference. Delegates from the MNDAA and Arakan Army, which constitute the Northern Alliance along with the TNLA and a faction of the KIA, were also present on Wednesday.

Also speaking at the opening session was Commander in Chief Senior General Min Aung Hlaing who said that signing the NCA is “not an accord to surrender the ethnic armed organisations.”

Some of the groups refusing to agree to the accord, which was signed by eight non-state armed groups in October 2015, are concerned that doing so would mean having to lay down their arms.

Min Aung Hlaing added that the Tatmadaw’s firm stance is to bring about a peace accord in line with the principles outlined in the NCA, adding that there were “external threats” to the peace process.

There have been reports that some of the non-signatories to the NCA are considering a new approach to the peace process led by the UWSA, a move that Min Aung Hlaing has criticised.

“Ignoring [the NCA] and pursuing other or the second way will be an attempt to loathe the establishment of a Union based on peace, democracy and federalism. As such, we have to assume that the attempt is tantamount to grabbing power and splitting from the Union through armed struggle.”

Security forces have been arresting the relatives of those suspected or charged with crimes when they can't find the suspects themselves. This is illegal, and a fundamental breach of human rights.
BY Danny Fenster