The 37 basic principles endorsed at the second 21st Century Panglong Union Peace Conference suggest that any final agreement for a peaceful, federal democratic Union will have significant implications for the constitution.

THE SECOND 21st Century Panglong Union Peace Conference took an important step forward when it approved nearly 40 principles that will be included in a future agreement on ending decades of civil conflict and creating a federal democratic Union.

The 37 principles were adopted without discussion on May 29, the last day of the six-day conference in Nay Pyi Taw’s cavernous Myanmar International Convention Centre-2. The event opened on May 24 and brought together representatives of the government, Tatmadaw, armed ethnic groups – including non-signatories of the so-called Nationwide Ceasefire Agreement at the opening session – and political parties.

Of the 37 principles – many of which reaffirm provisions in the 2008 Constitution – 12 focus on the political sector, 11 on the economy, 10 involve land and the environment and four deal with social policy.

There are notable differences between some of the 37 principles adopted at the conference and the 47 basic principles outlined in the first chapter of the constitution. 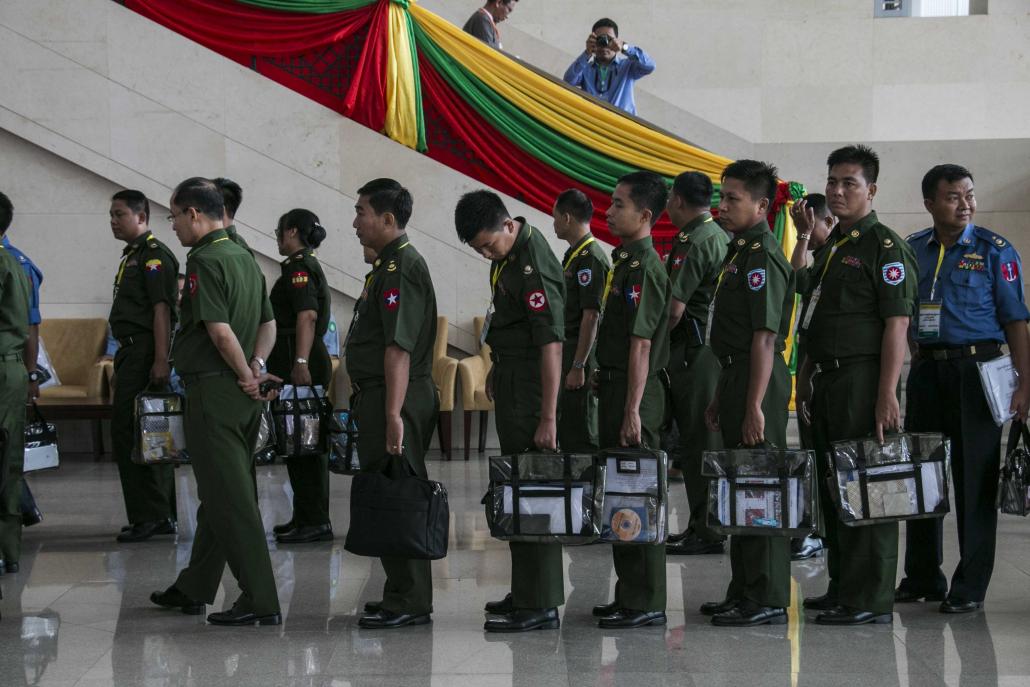 Of the two basic principles that can be described as new, the first is not included in Chapter 1 of the constitution, although it is expressed in Section 56, dealing with the delineation of self-administered divisions or zones. Under the basic principle endorsed at the conference, self-administered divisions and zones must be organised under the names of the relevant member of the nation’s 135 officially-recognised ethnic groups.

The conference also endorsed the basic principle that tax revenue collected by the Union, states and regions, as well as the proceeds from development projects and natural resources, must be shared in accordance with the law. This is not among the 48 basic principles enshrined in Chapter 1 of the constitution.

There is also a difference between the basic constitutional principle that the Union shall assist in developing the language, literature, fine arts and culture of the officially recognised ethnic groups, and the principle endorsed by the conference. The latter is far broader; it calls for the groups to have equal rights in political and ethnic affairs as well as the right to support, protect and promote their interests themselves.

The designation of the Union as comprising seven regions and seven states of equal status is outlined in Section 9 of the constitution. However, the conference adopted the basic principle that “federal” and “democratic” must be placed in front of “union” and “regions and states”. 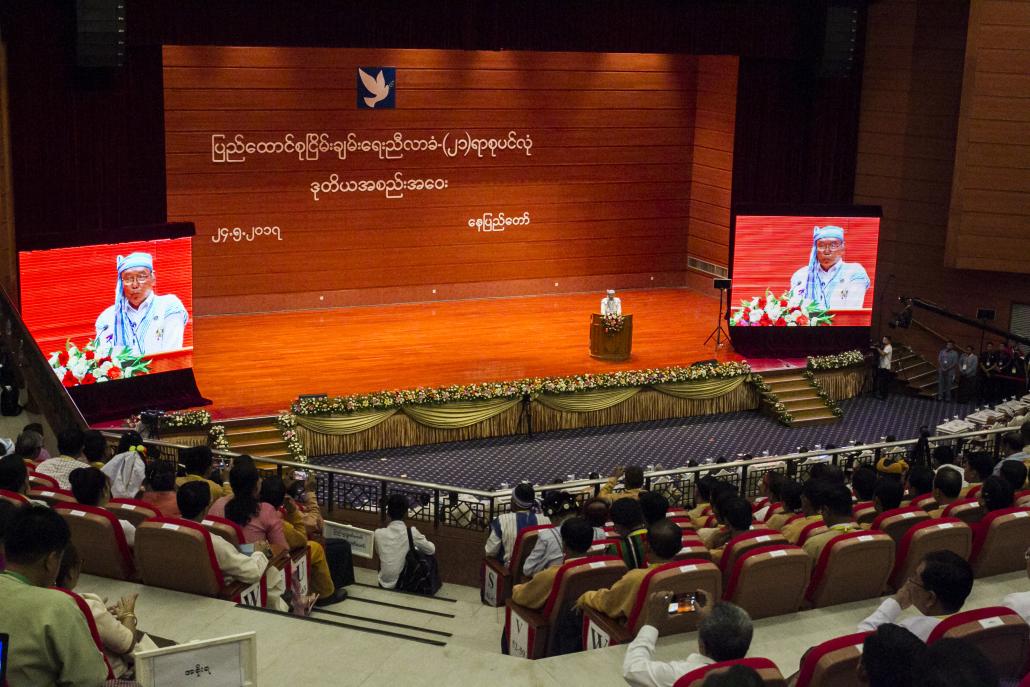 The principle endorsed at the Panglong conference also refers to the tribunal being “independent”, which is not mentioned in the constitution.

Finally, the conference endorsed two principles concerning democracy and elections that differ in essence with the constitution.

Under Section 39, a basic principle of the constitution is that the Union shall enact the necessary laws “to systematically form political parties for flourishing of a genuine, disciplined multi-party democratic system”. The conference backed the basic principle that Myanmar must be a multi-party democracy with free and fair elections in accordance with the constitution.

The principles for economic management outlined in the constitution and endorsed at the conference are basically the same, at least in terms of preventing economic activity that is detrimental to the people’s interests.

The constitution provides for all economic forces, including the State, regional organisations, cooperatives, joint ventures and the private sector, to participate in developing the national economy. The conference elaborated on this provision by backing principles that call for detailed policy on economic development. They include policy prescriptions for drafting rules and regulations aimed at building the market economy, alleviating poverty, reducing the gap between the rich and poor and equal opportunity, none of which are mentioned in the constitution. 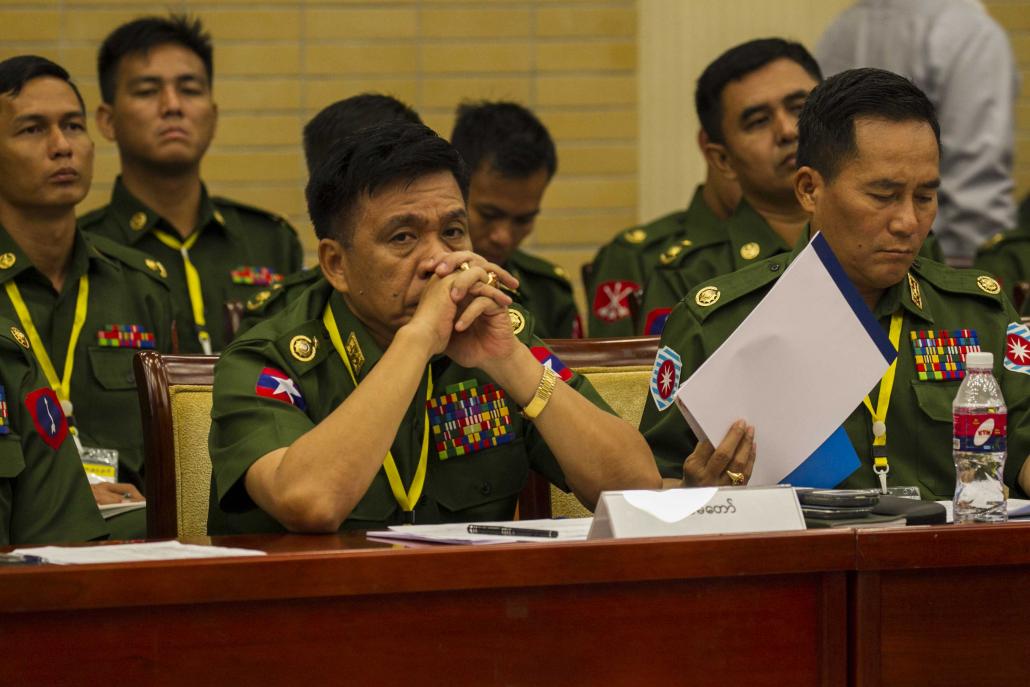 The conference also endorsed a slight adjustment to a constitutional principle requiring the Union “to protect and prevent acts that injure public interests through monopolization or manipulation of prices by an individual or group with intent to endanger fair competition in economic activities”. The conference backed the enactment of legislation to prevent the creation of monopolies.

The most important basic economic principle that is not addressed in the constitution concerns the division of finances and revenue between the Union and the states and regions. This principle is aimed at ensuring equal opportunity among states, regions and autonomous regions as well as transparency and accountability in the management of domestic and foreign investment. Detailed plans for these principles will go before future peace conferences.

Of the four basic principles on social policy that emerged from the conference, only one is similar to a basic principle of the constitution and it concerns the Union’s obligation to care for mothers and children, orphans, the children of fallen Defence Services personnel, the aged and the disabled. However, the Panglong principle expands on this to specify that they should be cared for regardless of race, religion or wealth.

The other three basic social policy principles adopted at the conference are not mentioned in the constitution. One concerns providing care for internally displaced people, ensuring they receive sustainable assistance, allowing them to settle anywhere of their choice in the Union and providing for their safety and dignity as human beings.

Land and the Environment

There are three basic principles addressing land and the environment in the constitution.  Section 23 obliges the Union to enact the laws needed to protect the rights of peasants and to help them obtain equitable value for farm products; Section 45 requires the Union to protect and conserve the natural environment.

The 10 basic principles endorsed at the conference include developing a people-centred, progressive land policy based on justice and fairness. They also call for less centralised policies, for land policy to be in accord with human rights and international standards, and to prioritise farmers’ interests when drafting policies. In addition, they call for the Union to grant citizens the right to own property and to inherit, and for the Union to protect intellectual property rights in accordance with the law.

They give the Union the power to resume ownership of land that has not been used for its designated purpose within a pre-determined time and to distribute land to those who can use it productively.

As well as preserving the environment, the conference supported plans for protecting, preserving and safeguarding cultural heritage and sacred sites.

It seems likely that once the political dialogue process, of which the 21st Century Panglong conferences are the apex, has reached agreement on the way forward to a peaceful, federal democratic Union there will be implications for the constitution.

However, it remains unclear whether the approval of such an agreement by the Union Hluttaw will involve constitutional amendments or the drafting of a new constitution.

Asked about this during a break on the third day of the conference, Colonel Zaw Min Tun, a member of the military bloc involved in discussions, said, “We will proceed according to the Chapter 12 of reforming the constitution as prescribed in 2008 constitution.”

Chapter 12 of the constitution deals with amending the charter and comprises sections 433 to 436. 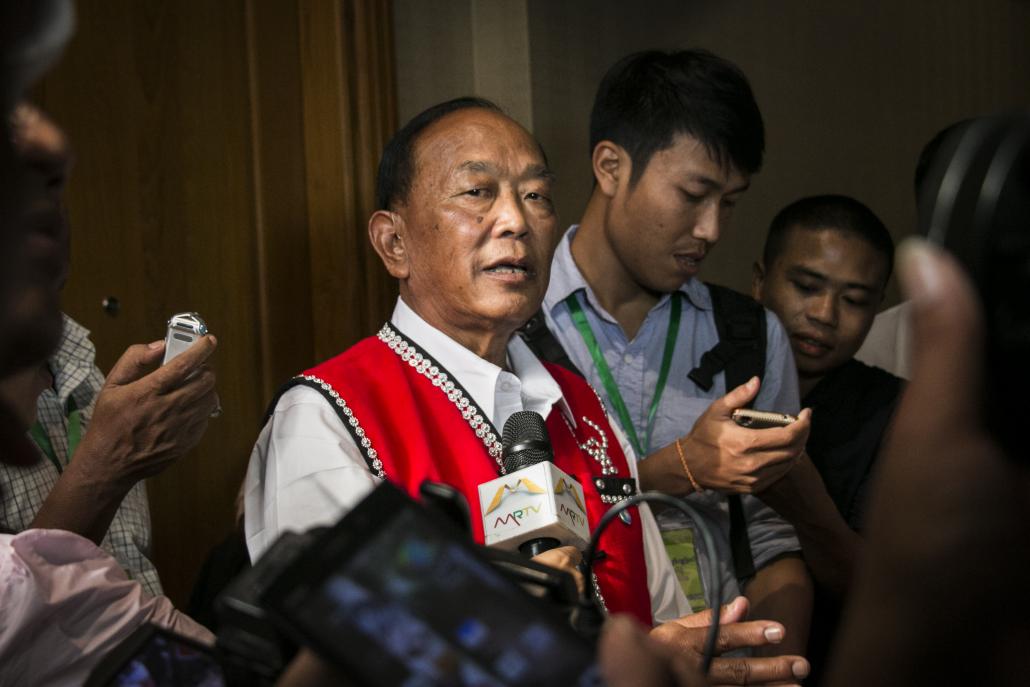 Section 433 requires the Pyidaungsu Hluttaw to consider a bill to amend the constitution if it is submitted by at least 20 percent of lawmakers, among whom are the unelected bloc of military MPs who hold 25 percent of all parliamentary seats.

Section 436 stipulates that most constitutional amendments require the support of 75 percent of the Pyidaungsu Hluttaw after which they must be approved in a referendum by at least 50 percent of the electorate.

A peace agreement would require the reform of the constitution, government spokesperson U Zaw Htay, a member of the secretariat of the tripartite Union Peace Dialogue Joint Committee – comprising representatives of the government and the Tatmadaw, signatories of the NCA and members of political parties – told Frontier on the sidelines of the conference on May 24.

Previous attempts to change the constitution – through either public pressure or an amendment bill – have foundered in the face of military opposition, including its 25 percent bloc in parliament.

However, the Tatmadaw’s involvement in the peace process, including national-level political dialogues, working committees, the UPDJC and its secretariat and the 21st Century Panglong conferences, suggests that it will not object to amending the constitution in parliament. By the time proposed amendments reach the Pyidaungsu Hluttaw, the shape of Myanmar’s newly amended constitution should already be clear.