NAY PYI TAW — Representatives from a bloc of ethnic armed groups excluded from or declining to participate in previous peace forums have confirmed they will meet with State Counsellor Daw Aung San Suu Kyi on Friday, as the 21st Century Panglong peace conference continues in Nay Pyi Taw.

U Kyauk Kaw Ann, chief of external affairs for the United Wa State Army, confirmed the meeting to reporters on Thursday afternoon after a closed-doors discussion with representatives from the government’s peace commission.

Thursday’s discussion, characterised by government peace negotiator Dr Tin Myo Win as a social meeting to thank the groups for their attendance, was also attended by Mr Hong Liang, the Chinese Ambassador to Myanmar.

Last month, the seven members of the bloc signed an agreement saying they would follow the UWSA’s path to peace, rejecting the Nationwide Ceasefire Agreement initiated by former president U Thein Sein and continued under the current government.

None of the representatives of the UWSA-aligned bloc – informally dubbed the “Panghsang Allies”, named for the UWSA headquarters where the agreement was signed – are signatories to the NCA. 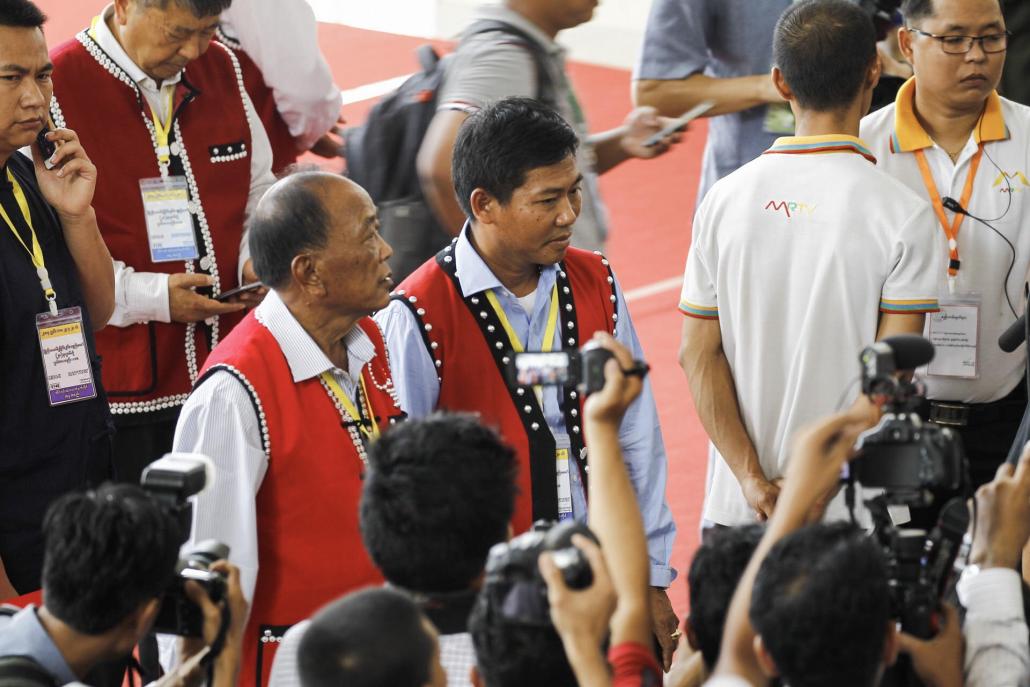 Confirmation of the meeting came the day military chief Senior General Min Aung Hlaing issued a warning to armed groups considering a repudiation of the NCA.

“Ignoring [the NCA] and pursuing other or the second way will be [seen as] an attempt to loathe the establishment of Union based on peace, democracy and federalism,” he said in a speech during the conference’s opening proceedings. “As such, we have to assume that the attempt is tantamount to grabbing power and splitting from the Union through armed struggle.”

Responding to questions about the army’s chief comments, Kyauk Kaw Ann said he was entitled to his views, but that he was confident that peace could be achieved, adding that he was thankful to both the Myanmar and Chinese governments for initiating the meeting with the State Counsellor.

No voting at Panglong

A Wednesday, on the opening day of the conference, members of the tripartite Union Peace Dialogue Joint Committee, said that there will be no opportunity to debate contentious issues at the event, and that only points agreed to by all participants will be approved.

The UPDJC members, which included government spokesperson U Zaw Htay and Dr Lian Hmung Sakhong of the Chin National Front, said that the conference will be used to discuss 41 points, which relate to security, politics, social and land and environment.

Only some of the 41 points have been made public, including non-secession from the union, the right of states and regions to draft their own constitutions, equal rights for all ethnic groups, and a commitment that no groups will be given special privileges.

If the points are not agreed at the Panglong, they will be discussed by the UPDJC and its working committee at a later date, said UPDJC secretary U Khin Zaw Oo.

“The leftover points will not be discarded. We will leave them for now and then discuss them in detail later,” he said.

Speaking on the sidelines of the conference, political analyst U Min Zin told Frontier that one of the measures of success from the conference would be to get at least one additional ethnic armed group to sign the NCA or a deed of commitment.

“But in terms of nation building, many people are not happy with the way discussions are being held at the conference. So we are not sure if those who have joined would be willing to sign any type of document,” he said.