Outcry over Mandalay megaproject after more than 1,000 families displaced

YANGON — Representatives of thousands of people forced from their homes by an industrial park in Mandalay have called on foreign firms to withhold further investment in the project until a more equitable deal is reached with the area’s displaced farmers.

More than 1,000 households from 14 villages had their land confiscated after the Mandalay Region government approved the Myotha Industrial Park project in 2013, said a report by the Paris-based International Federation for Human Rights.

FIDH and local residents allege the 4,000-hectare development in Ngazun Township, about 60 kilometres west of Mandalay, has been dogged by judicial intimidation, corruption in land title surveys, and a lack of due diligence on behalf of the project developer, Myotha Mandalay Industrial Development.

“They have treated international laws and local laws like they treated the villagers, like rubbish,” FIDH secretary-general Ms Debbie Stothard said at the report’s launch in Yangon on September 27.

The report says government authorities and MMID did not adequately consult with villagers before the project began and had failed to adhere to the provisions of the Land Acquisition Act.

“We have been working on the lands in Ngazun Township for generations,” said Ma Aye Htike, one of the displaced farmers. “But MMID said the land belongs to the state.” 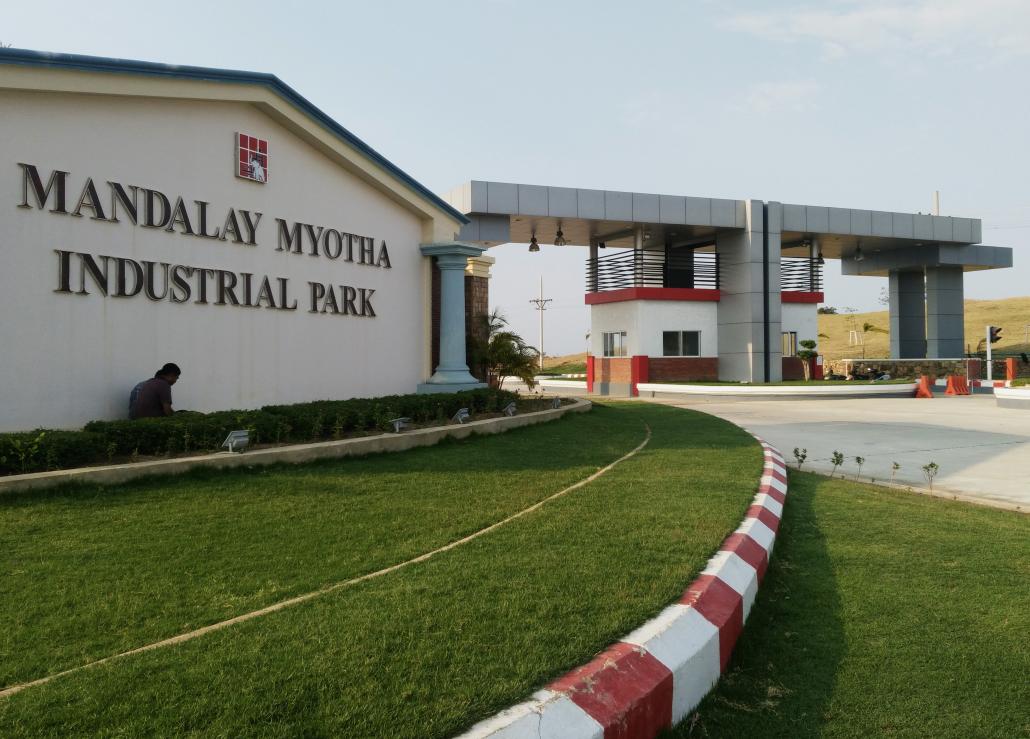 More than 90 percent of the land acquired for the project – from households that did not have formal land titles or whose attempts to obtain titles were blocked by local authorities – was subject to a compensation offer of K500,000 (about US$367) an acre. The offer was equal to about six percent of the land’s estimated market value, said FIDH. Households with formal land titles received offers of K2 million an acre.

Villagers alleged that surveyors from the government’s Land Measurement Committee routinely under-calculated the size of plots, “in many cases accounting for only between 10 percent and 25 percent of the land farmers said they used,” the report said. Families also reported that they had to pay bribes to authorities for an accurate land measurement, and  those who refused were denied a formal title.

An MMID spokesperson told Frontier the developer was doing its best to cooperate with villagers in the project area, and that “very few people” believed they had not received enough compensation for their land.

“Over hundreds of years, this area is well-known by the Myanmar people as a poverty area. There is no village inside the project area and it is not suitable for the cultivation for people to survive by themselves,” the MMID representative said. “Before this project started there was no market price [for land] in this area. The price which government decided for the compensation is fair.” 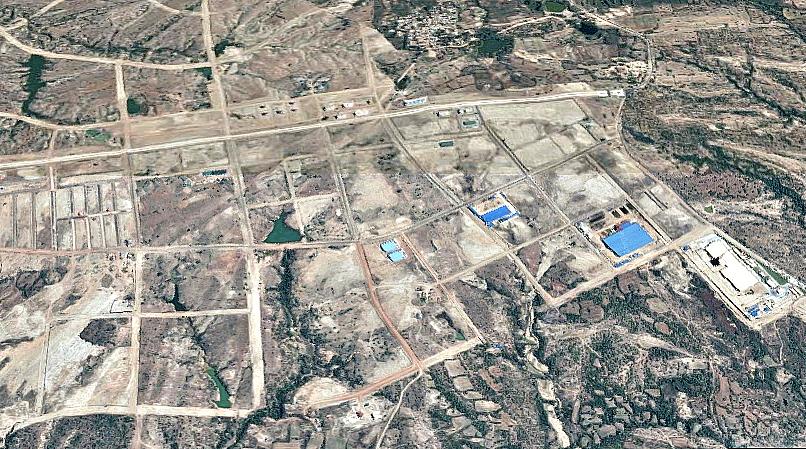 The Myotha Industrial Park was devised by the regional government’s Mandalay Industry Development Authority to broaden the area’s agricultural export base and provide job opportunities for Mandalay residents.

U Aung Win Khaing, chairman of MMID and its parent conglomerate, Royal Hi-Tech Group, said when the project was approved in 2013 that it would eventually create 150,000 jobs.

With the backing of the former military junta, Royal Hi-Tech group built the Mandalay Industrial Zone – a hub of automotive, timber and metal enterprises – on the city’s southern outskirts in 1990.

Aung Win Khaing’s business activities were rumoured to have the backing of the late U Aung Thaung, a former junta industry minister and businessman with a formidable political powerbase in nearby Taung Tha Township.

In October 2014, Aung Thaung was blacklisted by the United States Treasury for “undermining the positive political and economic transition” then underway in Myanmar, amid rumours he had backed hardline Buddhist nationalist groups. He died in 2015.

Work on the 809-hectare first phase of the Myotha project is expected to finish next year. Some foreign firms have already established light industrial operations in the park, including food processing and making building materials.

The project’s second phase includes constructing worker accommodation, improving the park’s road transport links and building a port on the Ayeyarwady River, about 25km to the west, to improve access to domestic and export markets.

The International Finance Corporation, the development arm of the World Bank, in August inked a joint venture to develop the Semeikhon Port project in partnership with MMID, with a proposed cash injection of $3.85 million.

In a response to the FIDH report, Aung Win Khaing was quoted by the Myanmar Times on September 28 as saying that IFC’s involvement in the port project was proof that his company had adhered to its human rights responsibilities in the industrial park development.

The IFC’s Myanmar representative, Mr Vikram Kumar, told Frontier on September 29 that the port project was “not an associated facility of the MMID park”.

“IFC is not investing in the industrial park being developed by MMID,” Kumar said. “IFC has chosen to invest in the Semeikhon Port due to its transformational nature as the first, modern, efficient, environmentally and socially sustainable inland river port operation in Myanmar to facilitate the flow of goods into and out of the Mandalay Region.”

His comments came as MMID said it had begun a land acquisition and resettlement plan for the port with the support of international consultants, and pledged “regular monitoring and evaluation” of the welfare of the project area’s community.

Mandalay Region MP Daw Thae Su Wai (National League for Democracy, Ngazun-1), said she would try to ensure that the government increased its offer to those who have been refusing compensation to K2 million acre, to match the amount paid to those with titles to their land.

“If the farmers get a plot of land, they will have a place to live when the industrial zone is finished. If they want to keep doing agriculture, they will have land to sell and with this money they can buy farmlands,” she told the Myanmar Times. 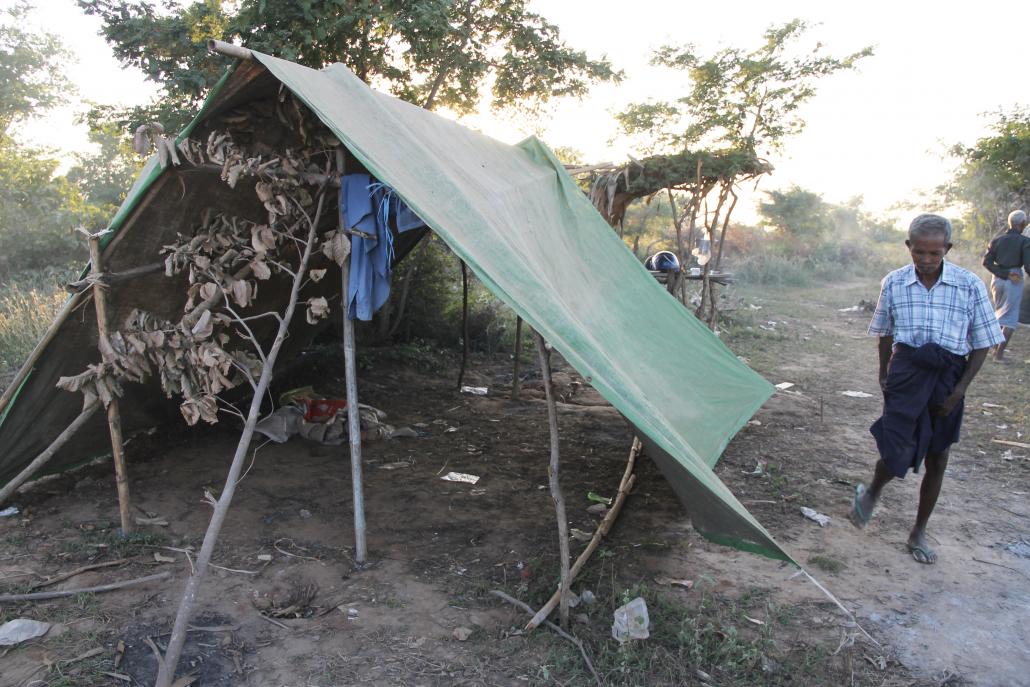 A makeshift encampment used by villagers in the Myotha Industrial Park project area used to guard against the overnight bulldozing of farmland in November 2014. (FIDH | Supplied)

Speaking at the FIDH report launch on September 27, activist and former political prisoner Ko Zarni was sceptical that the government would intervene on behalf of the affected farmers.

“In my experience, the parliamentarians stand with MMID,” he said.

Zarni, the head of the Saitta Thukha Development Institute in Yangon, accompanied FIDH on several research trips to the Myotha site.

He said he later received death threats because of his work with the farmers and was the subject of an attempt by unknown assailants to run his motorbike off the road.  Police in Mandalay had declined to accept a report about the incident, Zarni said.