An election marred by controversy over voting procedures has seen incumbents hold on to 38 of the 58 central executive committee positions on the Union of Myanmar Federation of Chambers of Commerce and Industry, the nation’s peak industry body.

A MARATHON election for executive positions on the Union of Myanmar Federation of Chambers of Commerce and Industry has seen the old guard retain its grip on power amid a fierce factional struggle and controversy over a voting procedure that required pre-registration.

The election to choose 72 positions on the nation’s peak industry body at its headquarters in Yangon’s Dagon Township began at 8am on Saturday, September 17 and ended more than 18 hours later.

Federation members arriving for the vote in expensive cars were an indication that the event was about the rich choosing the rich to lead the organisation.

Both quiet jubilation and disappointment were evident on the faces of the crowd of businesspeople waiting in eager anticipation in the federation’s conference hall when the result was announced about 2:30am on September 18.

Interest in the outcome had intensified a few days before the ballot when the federation’s chairman, U Win Aung, announced he would not seek re-election to the position.

He was replaced by business mogul and outgoing vice chair, U Zaw Min Win, who was the only candidate for the federation’s top job. 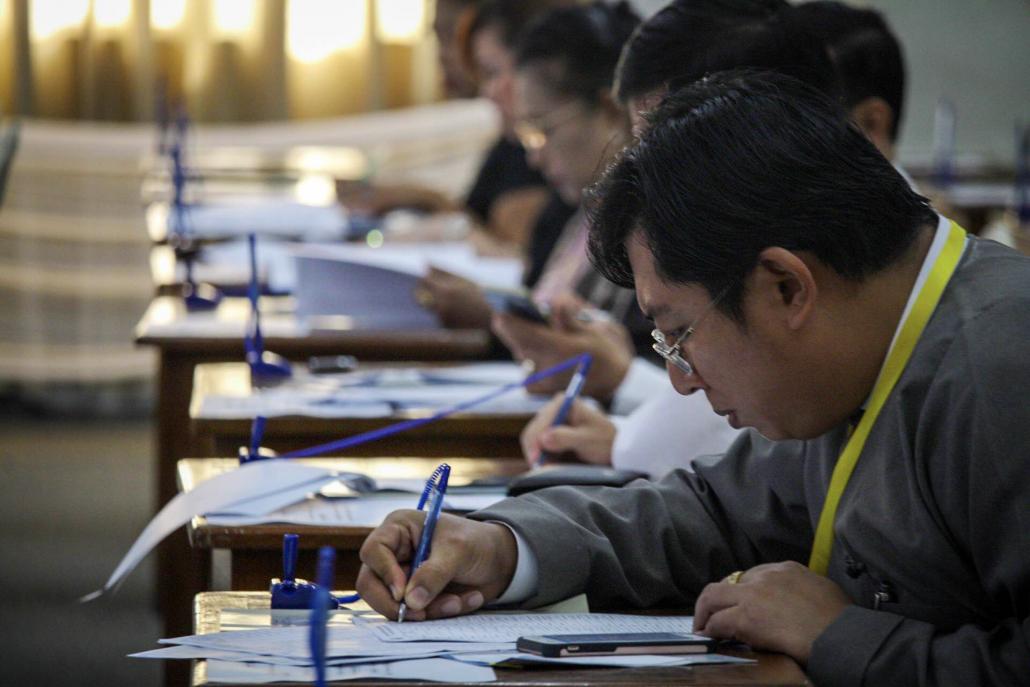 Federation figures show that it has more than 30,000 members, but secretary-general U Moe Myint Kyaw said the number of active members – those who pay membership fees – was about 15,000. A total of 72 business groups, such as the Myanmar Garment Manufacturers’ Association and the Myanmar Industries Association, are affiliates of the federation.

Those holding executive positions on the federation have played an important role in advancing the government’s policies on business as well as strengthening links between Myanmar and foreign businesspeople.

At a pre-election news conference on September 15, Moe Myint Kyaw said the number of meetings between the executive and visiting foreign business delegations was like a “tsunami”.  The federation’s role in meeting and debriefing foreign delegations was “political”, he said.

The election was only the federation’s second since 2013. Prior to that its executive was appointed by the junta; the top seats went to those with close ties with the generals.

A previous chairman, U Win Myint, stood down from his position to contest the 2010 election for the military-backed Union Solidarity and Development Party. In 2011, he was appointed minister for commerce in U Thein Sein’s administration, a position he held until the change of government early this year.

There was controversy over the 2013 election because some members argued that the procedural rules were unfair. U Win Aung, a US-sanctioned businessman who was appointed chairman before 2013, was elected to another three-year term. He was criticised when he expressed interest in seeking re-election this year because the rules stipulate that a chairman can serve only two terms and decided not to stand.

In 2013, the opposition to Win Aung was small; just a handful of members. In contrast, the rivalry between the competing factions in last week’s election was apparent as soon as members stepped inside the conference hall. Two groups of identically costumed women handed out pamphlets listing the names and ballot numbers of each faction’s 70 candidates. Another 55 candidates were non-aligned, making for 195 candidates in total.

The procedural rules provide for a three-step ballot. Ordinary members vote for 72 of the 144 executive committee positions, with the other 72 chosen by organisations affiliated with the federation. These EC members then vote for the 58 positions on the central executive committee, and it in turn chooses the chairman, seven vice-chairmen, secretary-general and seven joint secretaries-general.

‘This system is nonsense’

The controversial pre-registration requirement meant that of the federation’s 15,000 active members, only 1,134 were eligible to vote, a participation rate of less than 8 percent.

“This system is nonsense,” said U Khin Hlaing, head of Zawtika International Co. A vocal critic of the 2013 election, he boycotted the registration process this time out of disappointment at the electoral procedures.

“Why do we need to register in advance?” he said, adding that members should only need to show membership cards and receipts for paying their annual fees on the day to be able to vote. 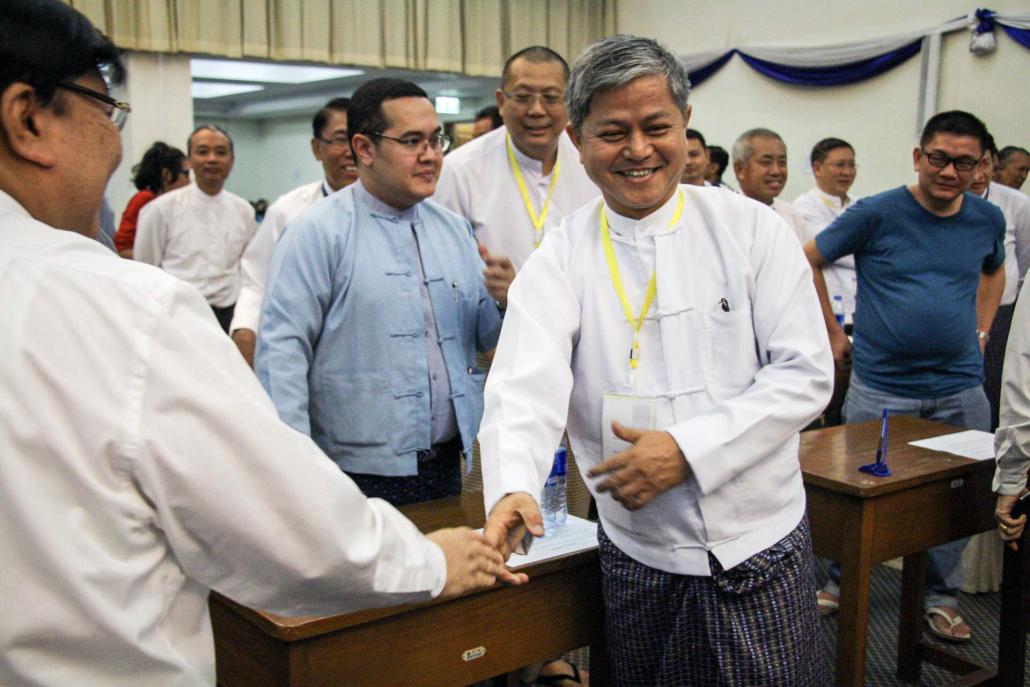 “I think they created these voter registration procedures in order to reduce the number of voters, so they can more easily sway the outcome,” he told Frontier.

Voting for the EC took place between 8:30am and 1pm and the ballot count finished just before 7:30pm. Voting for the CEC began shortly after, about 8pm.

When the result of the election for the CEC was announced at around midnight, some members were seen throwing away the ballot papers with sorrow on their faces, while others spoke among each other in hushed tones. Some walked out of the hall immediately.

Of the 58 CEC positions, 38 went to incumbents, leaving only 20 new faces and the old guard firmly in control. Only two positions on the CEC went to women.

The opposition group, comprised mostly of younger members, described its candidate list as the “dream team”. They managed to snag three of seven vice chair positions – Myanmar Young Entrepreneurs Association chair U Wai Phyo; U Ye Min Aung from Myanmar Rice Federation; and former deputy minister for communications U Thaung Tin – but it wasn’t enough to control the CEC and deliver the chairmanship.

Those who expressed dismay at the result told reporters it was not because of the few new faces and massive gender inequality. It was, they said, because the result showed that the old guard would continue to dominate the executive positions.

Due to the composition of the CEC, the opposition group decided against putting up a candidate. Vice chairman Zaw Min Win was left as the only candidate for the chairmanship.

Some members expressed disappointment about the factional differences emerging in the federation.

“It’s like two gangs fighting,” said a businessman who asked not to be named. 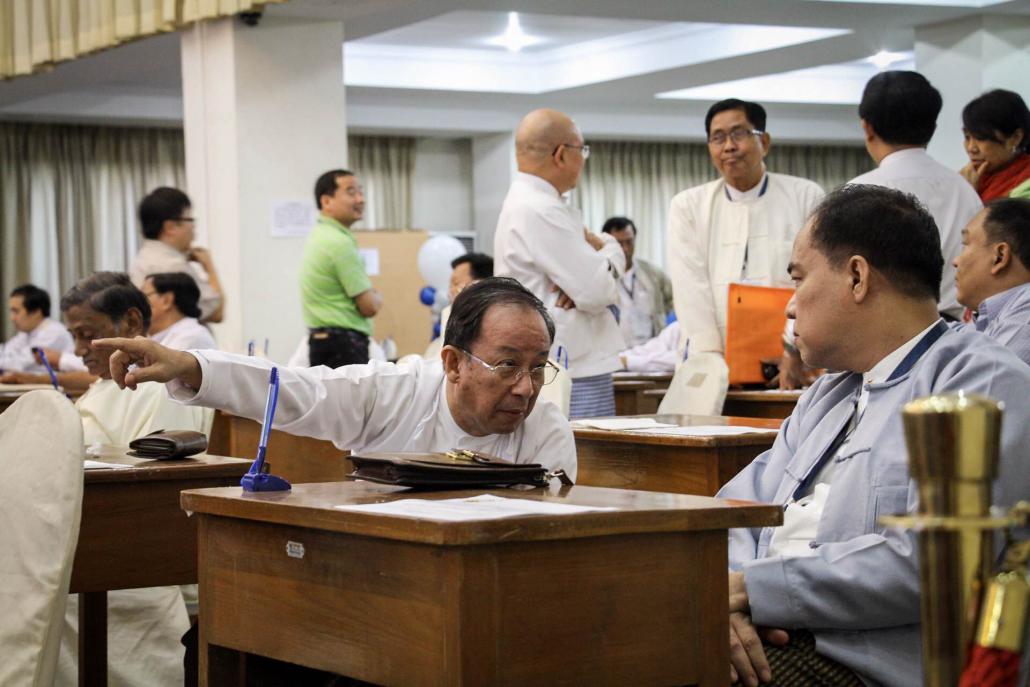 UMFCCI members confer during Saturday’s vote. Some have criticised the rules used to elect the federation’s Executive Committee, particularly the requirement that members register to vote prior to the poll. (Nyein Su Wai Kyaw Soe / Frontier)

After his successor was named, outgoing chairman Win Aung said that factional politics might be a challenge for the new executive and expressed hope that the different groups would be able to work in harmony.

Outgoing joint secretary general U Aye Lwin, who is considered part of the losing faction, said he had been asked to contest the chairmanship but had decided against it after seeing who had been elected to the CEC. Others members had backed out of the race for the same reason. “That’s why there was only one candidate for the position,” he told Frontier.

Aye Lwin said the CEC was dominated by the Myanmar Industries Association but should be representative of all economic activities so that it could work more effectively on behalf of all of the private sector.

Business partnerships rather than ability had influenced the vote for the CEC, he said.

Zaw Min Win, a vice-chairman of the federation for 15 years, told Frontier after being confirmed as chairman that his allies on the CEC included a diversity of ages and business sectors.

“There are outstanding people serving as vice chairman but I believe the reason I was chosen as chairman is because people admire me and know I can give more time to the federation than others,” Zaw Min Win told Frontier.

“He [Zaw Min Win] has a lot of experience which I think is better for the chairman’s role,” said newly elected vice chairman, U Hla Maung Shwe.

“He deserves this position,” he told Frontier.

Members who participated in the election expressed overwhelming support for amending the federation’s rules for choosing executive positions.

Among them was Dr Soe Tun, executive director of Myanmar Agribusiness Public Co and a member of the Dream Team ticket, who criticised the rule that only those who had served three years on the executive committee could be candidates for the CEC.

“[This rule] is hindering outstanding people from becoming CEC members,” he said.

Khin Hlaing said it was essential to amend the rules because they were the cause of most of the disputes within the federation.

Zaw Min Win acknowledged the criticism and told Frontier he would try to amend the rules.

One of his objectives as chairman would be to strengthen relations with the federation’s affiliates throughout the country, he said, adding that he also wanted the federation to conduct more research.

“The government is facing a lack of research and statistics. We will do research into every sector and advise the government based on what it reveals,” he said.

Many members at the election predicted that the decision by the Obama administration to lift economic sanctions would mean a steady rise in the number of US business delegations visiting the federation to discuss investment opportunities.

Some said the decision by the US Treasury Department in April last year to remove Win Aung and two of his businesses from its Specially Designated Nationals blacklist when he was federation chairman was an acknowledgement of the role’s importance.

The newly elected executive will take office at the federation’s next annual general meeting, expected to be held next month. Organisation rules require the meeting to be held within 15 months of the previous AGM, Zaw Min Win told Frontier.

U Aye Lwin said that regardless of which faction was victorious, the UMFCCI needed to modernise to reflect the new political environment. “The previous governments always just appointed their men. But we have a new government now and the political and business landscape is change,” he said. “So, the executive body of the chamber can’t limp along like before.”