Nuns complain of being ignored at Shwedagon offerings ceremony

As dignitaries and the public distributed offerings to 18,000 monks at a special ceremony at the Shwedagon Pagoda, the 5,000 nuns at the event risked heatstroke and went home empty-handed.

ON JANUARY 1, thousands of monks and nuns thronged the Shwedagon Pagoda for a special gathering jointly organised by the union and Yangon regional governments with the support of the business community.

Exactly 18,000 monks attended the event, one of the largest gatherings of members of the sangha in Myanmar’s history, as well as 5,000 nuns.

The gathering involved a consecration ceremony for the pagoda as well as the giving of offerings of rice, snacks and money to monks.

The Shwedagon Pagoda is consecrated each year on the full moon day of Tabaung, which this year falls on March 1, at a ceremony arranged by its trustees.

In 2018 though the union and regional governments decided to hold a special event on the first day of the year.

The event was virtually unprecedented, and the number of monks and nuns attending created challenges for crowd management that attracted criticism, especially the treatment of the thilashin (nuns).

Some said it reflected the general lack of respect shown towards nuns relative to monks in Theravada Buddhist countries. 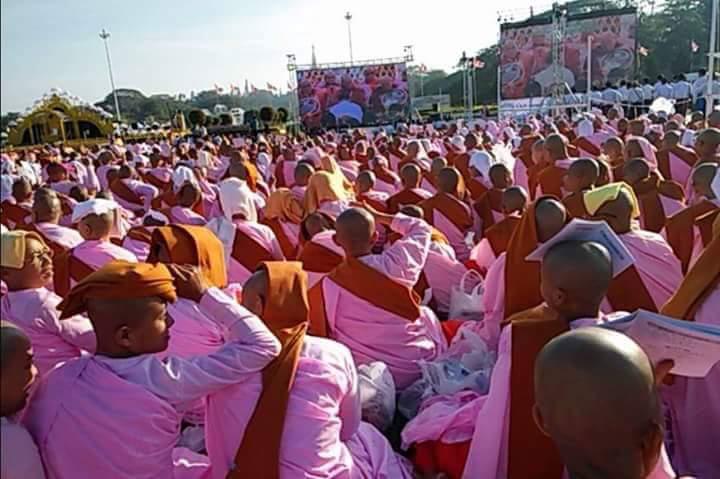 In early Theravada Buddhism, nuns, known as bhikkunis, were ordained with the same status as monks. However, history shows that the bhikkuni lineage became extinct in the 11th to 13th centuries and no new bhikkunis could be ordained because there were no bhikkunis to give ordination.

But it wasn’t just nuns who expressed concern about the event. U Khemacara, 31, a monk from a monastery in East Dagon Township, said he was uneasy about the purpose.

“We were told at a meeting with the trustees committee that the event was aimed at boosting Myanmar’s image in the world,” Khemacara said. “It was as if they wanted to use us so that they looked good.”

Some of the restrictions imposed on monks attending the event were unnecessary, he said. They were forced to wear robes of a specific colour, and were required to sit for much of the ceremony while a drone circled overhead taking footage.

But most of the complaints came from the nuns who were invited to participate. They weren’t even given a place on the pagoda platform; instead, they sat across the road in People’s Square and watched events on a large television screen.

And then there was the donation. Yangon Region Chief Minister U Phyo Min Thein presented each monk with a donation of K5,000 and the union government promised each participating monk would receive K50,000. While it was not presented on the day, Khemacara said he was given the money on January 6. If each monk received K55,000, the total donation would be about K1 billion.

Although organisers raised a total of K3.04 billion in donations for the ceremony, the nuns received nothing whatsoever from the government. However, they benefitted from the generosity of members of the public, who gave them cash donations of K100 or K200, as well as bottled water and snacks.

Daw Ponnya Vati, 40, who was among the thousands of nuns seated at People’s Square for the Shwedagon event, said the heat was oppressive but they were told by officials not to use their umbrellas because the event was being screened on television.

Ponnya Vati was also disappointed that the presence of the nuns was not acknowledged, despite them being asked to attend the event.

There was no program for the nuns after the consecration ceremony was completed by the monks, she told Frontier on January 4.

“No government officials showed up in front of the nuns’ group; I felt that we were being ignored,” she said.

In a Facebook post, Daw Uttamacari, 30, a nun from a nunnery in Thingangyun Township, accused the government of neglecting the nuns at the event.

She did not attend, but after hearing from nuns who were there, wanted to show support and encouragement for their patience, diligence and tolerance.

“My main objective was to show empathy with the nuns at the event,” Uttamacari told Frontier in an interview on January 2.

She insisted that it was not about the money. The nuns had been required to sit in the open for many hours under a relentless sun and some had suffered heatstroke, she said.

“They are human beings – all they expected was a small offering from the event,” Uttamacari said. “A friend of mine who attended the event told me she is depressed and no longer motivated to be a nun and wants to quit.” 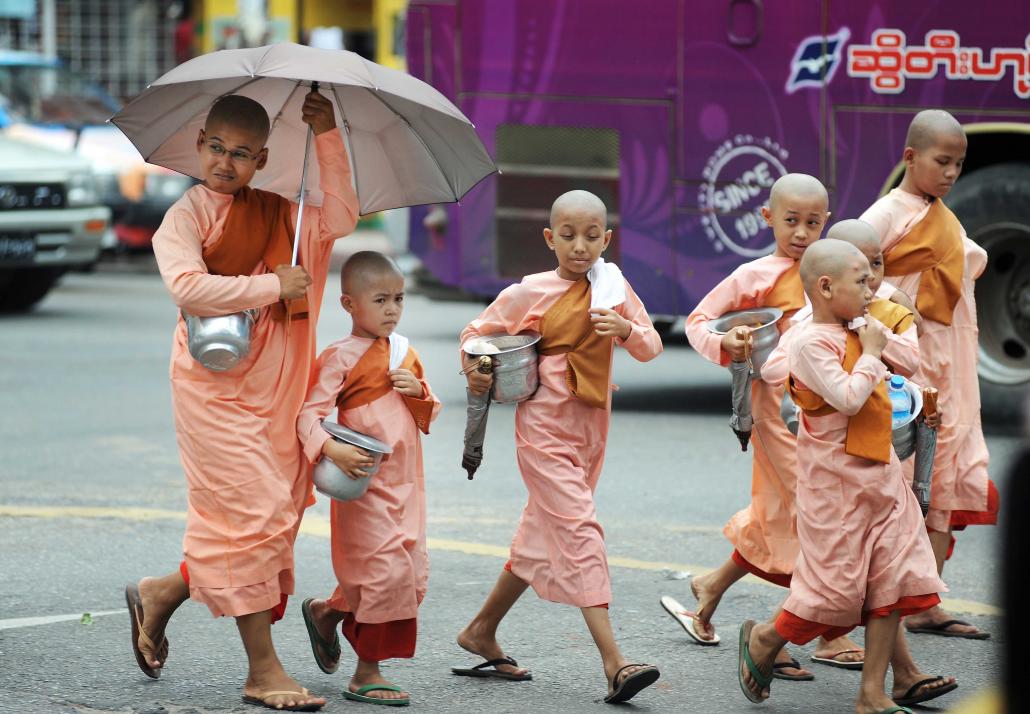 Nuns cross a road in downtown Yangon. Nuns are often shown less respect than monks, in part because they are not ordained. (Steve Tickner | Frontier)

Such complaints have proven controversial on social media, with some saying that it was wrong for the nuns to complain about not receiving a donation.

A user named Khon Naw Khame said monks and nuns “do not have the rights to criticise the amount of a donation offered”.

However, user Thartaw Pearl said it was pitiful to see the nuns out in the hot sun at People’s Square just to burnish the country’s image.

“It was just like fish being dried under the sun,” Thartaw Pearl wrote.

The criticism echoes that directed at Daw Esukhacari, a nun living at the Shwekyaryon nunnery in Bahan Township, who complained on Facebook in early August that she had been ignored by a group of donors who came to visit her university.

Esukhacari wrote that when she was having lunch in the academy’s dining room where 24 monks were also eating, laity ignored her when they offered donations.

The refusal to show recognition was the main reason Esukhacari posted her complaint on Facebook. However, she did not blame the donation group; she said she believed they had simply not considered that a nun would study for an MA.

“They think only monks study for MA degrees,” she told Frontier at the time.

“I was so ashamed at being left out of the group [to whom donations were given],” she said, adding, “The purpose of the post was definitely not to receive money.”

Ponnya Vati said nuns had not participated in the event because of an expectation of receiving offerings, but because they had been invited to attend by the government. They had heard that there would be offerings given at the event and naturally expected to receive a small donation.

“However, we just turned up and went back, after staying out in the sun for a while.”

People should be more supportive of nuns, she said, adding that they should not be treated as they were at the Shwedagon ceremony.

Khemacara said that as the government invited nuns to attend the event, it should have arranged for them to receive a donation and showed them more respect.

The controversial nationalist monk U Wirathu was also critical of the nuns’ treatment, saying in a Facebook post that they had been abandoned and action should be taken against those responsible.

After criticism of the nuns’ treatment spread on social media, Phyo Min Thein on January 2 apologised for their discomfort in a post shared on his Facebook page.

One of the most common questions on social media about the event is why nuns were invited if the government intended only to distribute offerings to monks.

Yangon Region Minister for Planning and Finance U Myint Thaung said on January 5 that he had been asked many times who had donated sums for the offerings and regarded the question as inappropriate.

“People would rather rejoice about the event,” he said, “regardless of the amount involved.”

TOP PHOTO: Monks enter the Shwedagon Pagoda for a ceremony organised by the union and Yangon regional governments on January 1. (Sai Zaw | 7 Day)