Tensions have emerged between ethnic communities and the government over the greater profile it is giving to independence hero Bogyoke Aung San, who once famously promised “equality without discrimination”.

THE KAYAH State government has been criticised over its decision to spend about K60 million on an equestrian statue of independence hero Bogyoke Aung San to be erected in the state capital, Loikaw.

Under the decision, made on February 1, the government wants the statue to be finished by July 19 – Martyrs’ Day – which this year will mark the 71st anniversary of the assassination of Aung San and eight others during a meeting of the interim cabinet at the Secretariat building in Yangon.

The statue, the first of its kind in Kayah, will be paid for by the state government, which plans to bring sculptors from Yangon to Loikaw to work on the project.

Despite efforts by the state government to drum up support for the project, some Kayah residents are not pleased. Among them is Ko Ba Nya, director of the Karenni Human Rights Group.

“I’d like to ask if a statue of the Bogyoke is imperative at this moment,” Ba Nya told Frontier.

He said Aung San’s pledge to have “equality without discrimination” between the ethnic nationalities and the Bamar in an independent Burma was more important than a statue.

“Forcefully erecting the statue, without respect and recognition for what Bogyoke said, can only be viewed as trying to show this is a Bamar area,” said Ba Nya.

It is not the first time that a decision to honour Aung San, the father of state counsellor and National League for Democracy co-founder Daw Aung San Suu Kyi, has led to disagreement and controversy between a state or regional government and ethnic nationalities.

There were protests in Mon State early last year after the Union Ministry of Construction said a new bridge across the Thanlwin (Salween) River linking the state capital, Mawlamyine, and Chaungzon Township on Bilu Kyun, would be named after Aung San.

The preferred name for the structure among many Mon was either the Yamanya (which means Mon State in their language) or the Thanlwin bridge.

Mon sensitivities were ignored and on March 14 last year the Pyithu Hluttaw voted 217-43, with 116 abstentions, to name the bridge after Aung San, prompting protests in Mawlamyaine and a petition that attracted more than 100,000 signatures.

The decision had left Mon people upset, said Ko Min Aung Mon, an activist involved in the campaign against naming the bridge after Aung San.

“Ignoring the feelings of local people in naming the bridge disappointed the Mon,” he said.

Voters expressed their disappointment at the ballot box in the April 1 by-elections last year, when the NLD lost the Pyithu Hluttaw seat of Chaungzon to a candidate from the Union Solidarity and Development Party.

After the bridge demonstration, residents of Mon State’s Mudon protested against the planned erection of another Aung San statue in their town. The protesters wanted the statue to instead depict an element of Mon culture, but their request was denied.

“It seems as if this government gives priority to a family rather than the interests of the people,” said Min Aung Mon. 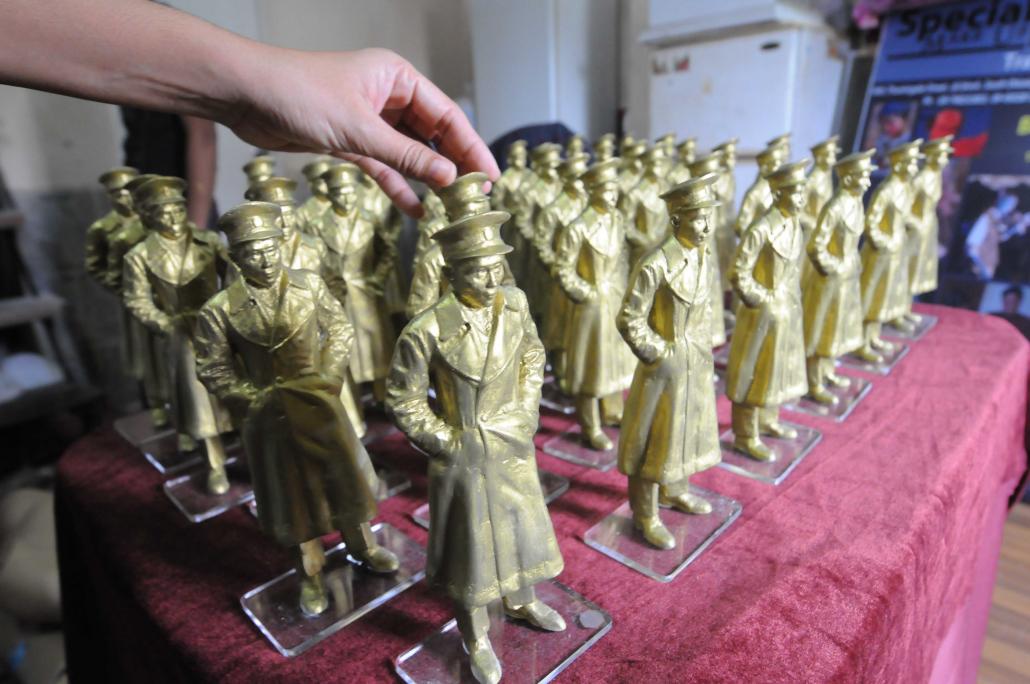 There has been an increase in the number of Bogyoke Aung San statues being unveiled since the NLD, which is led by his daughter Daw Aung San Suu Kyi, came to power. (Steve Tickner | Frontier)

He recalled that the USDP government of President U Thein Sein had cancelled a plan to change the name of the Mon State town Thaton to Thuwannabumi because of objections from residents.

Successive military governments played down Aung San’s image but he has been receiving a higher profile since the NLD took office in March 2016.

The change in official attitudes towards Aung San can be gleaned from the design of currency notes.

Aung San’s image first appeared on a currency note in 1958 when Burma was a parliamentary democracy and it was used on 10 of the 12 notes issued until General Ne Win seized power in 1962. His government replaced the images of Aung San with other designs.

Under the junta headed by Senior General Than Shwe, from 1992 to 2011, 15 notes were issued with new designs but only one featured the Bogyoke’s image.

“The name of the Bogyoke was obliterated in various ways [under military rule],” said Pyithu Hluttaw MP U Kyaw Aung Lwin (NLD, Sidoktaya, Magway Region), during the debate on March 14 last year over the Mon State bridge name controversy, explaining why he felt the structure should be named after the independence hero.

NLD spokesperson U Win Htein has said the increase in the number of bronze Bogyoke statues in the country since the party took office is related to psychology.

“In these more open times, the appearance of many Bogyoke statues in many parts of the country makes up for the suppression of the past,” he was quoted as saying by Yangon-based News Watch Journal on December 3 in a report about plans for an equestrian statue in Nay Pyi Taw.

The Kayah statue will be the tallest of its kind in Myanmar and its estimated cost is K150 million (about US$113,000), said a Nay Pyi Taw-based committee in charge of the statue building.

Among the critics of spending on statues honouring the Bogyoke is former Pyithu Hluttaw MP U Thein Nyunt, a member of the New National Democratic Party, who lost the Yangon seat of Thingangyun to the NLD in the 2015 elections.

“When the country is poverty-stricken there are better ways of spending the country’s income,” Thein Nyunt told Frontier.

He said a park in neighbouring South Okkalapa Township has two Bogyoke statues that were built at the same time, and officially unveiled on Martyrs’ Day in 2017. The groups who built the statues did so for “political purposes”, he said, adding that some politicians were already using images of the Bogyoke to support their campaign for the general election due in 2020. The situation was not much different from the early years of independence, Thein Nyunt said, when politicians at the time often used the Bogyoke’s image for political gain.

Although statues of prominent Bamar such as Aung San can be found in many parts of the country, ethnic nationalities face obstacles if they want to honour their heroes.

The Tatmadaw has twice blocked moves by the Karen National Union to erect a statue honouring the group’s founder and leader, Saw Ba U Gyi, who died in 1950. 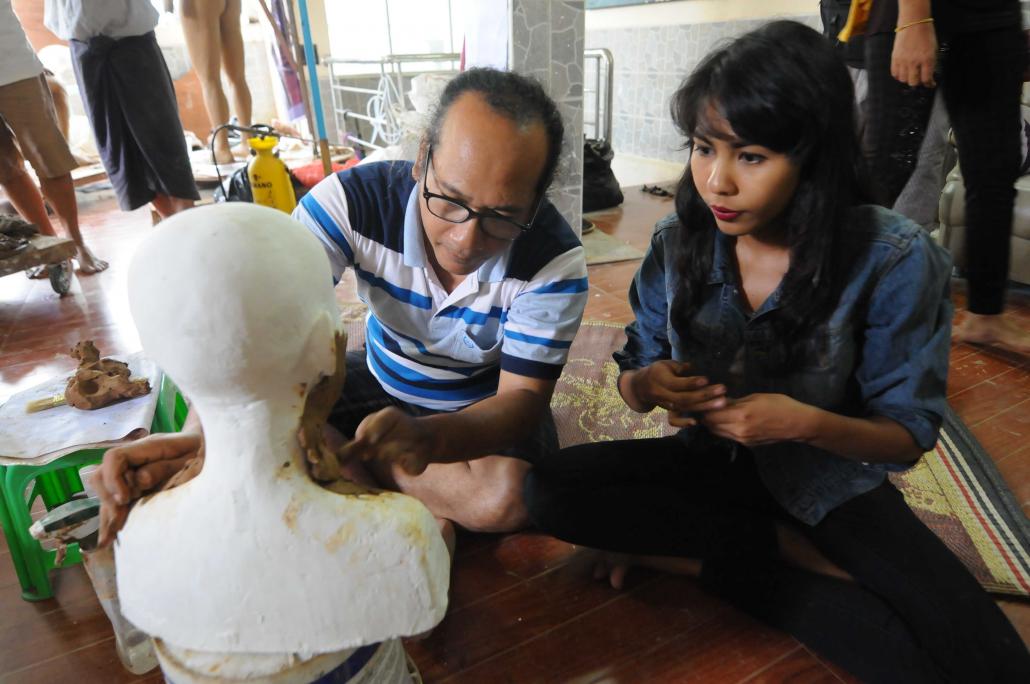 “How can they build unity with the country’s ethnic people by acting this way?” Win Yaw town chairman and KNU member Saw Maung Shwe told the Irrawaddy.

Thein Nyunt said it was logical in a country with 135 recognised ethnic nationalities that minorities would want to give recognition to their own leaders.

He said the dispute over the statue of Ba U Gyi was an example of the kind of issues that would need astute handling by the authorities as the country moves towards federalism.

Ba Nya reiterated the importance of the message behind Aung San’s pledge of ethnic equality.

“The government should consider how the ethnic people will be more respectful of the Bamar if, instead of giving us promises and building the statue, it prioritises following its promise [of peace] and builds the statue later.”