YANGON — Candidates from the National League for Democracy won 85 percent of all seats in elections held on Sunday for Yangon’s municipal government, the Yangon City Development Committee, including all six of the elected seats on the top-level executive committee.

NLD candidates took 83 of the 99 elected seats for township municipal committees. Three of these seats were being contested in each of the 33 townships under the jurisdiction of the YCDC, and included the position of township committee chairperson. The remainder were won by independent candidates. However, five of the successful NLD candidates were automatically declared victors, because nobody ran against them for their township-level seats, alongside eight of the successful independent candidates.

The Union Solidarity and Development Party was the only other political party to field candidates, and won no seats.

The municipal election was the first in 60 years to be held in Yangon with universal adult suffrage and the legitimate participation of political parties. In the last Yangon municipal election in 2014, only heads of households could vote, and parties were banned from endorsing candidates.

Five of the 11 seats on the YCDC executive committee remain unelected and are appointed by the Yangon Region government, including the seat reserved for the chairperson, who also has the title of Yangon’s mayor. The same is true for two of the five seats on each township committee. The newly created position of Yangon vice mayor, however, will be chosen by committee vote from among those elected to the executive committee.

YCDC election commission chairperson U Aung Khine confirmed the results at City Hall on Monday, but he refused to confirm or answer reporters’ questions about overall voter turnout, which was observed by Frontier reporters and election monitors to be as low as 10 or 15 percent in polling stations across the city.

Monitoring group the People’s Alliance for Credible Elections, which fielded 348 observers on election day, said in a statement issued on Monday that the polling and counting processes were “smooth and orderly”, with 96 percent of polling stations having “all the necessary staff and materials”, 91 percent opening on time and few credible reports of irregularities.

However, the group noted that, in more than half of the polling stations observed, would-be voters were turned away because they were not on the voter list. The YCDC election commission, which was only appointed in January and had little time to make the necessary preparations for the election, had compiled the voter list based on household data kept by the General Administration Department, with the aim of including all citizens aged 18 and over who had lived in the city for a year or more.

“The disenfranchisement of eligible voters is especially disappointing in a low-turnout election,” the PACE statement said.

Results from two polling stations in Lin Lon ward of Sanchaung Township were cancelled in their entirety because 32 people who were not on the voter list were allowed to vote.  U Khin Maung Kyaw, a YCDC election commissioner, told Frontier, “We will take action [against the officials responsible] under the election law.”

Most of the NLD candidates won their seats by a significant margin. The six elected seats on the YCDC executive committee each corresponded to a different geographic constituency, and in Constituency 1 the NLD’s U Win Myint Than got 48,138 votes, with independent candidate U Zaw Thant a distant second on 17,870 votes. NLD candidate U Thura Aung won Constituency 2 with 58,187 votes, ahead of independent U Aung San Lin with 31,368 votes.

Constituency 3, which includes the western part of central Yangon, was particularly contested, with 10 candidates running. These included youth candidates Ma Htet Htet Htun, a former Miss Universe Myanmar champion, and Ko Aung Khant, who both vied as independents and gained relatively high traction on social media. However, NLD candidate U Soe Lwin still claimed victory with 28,780 votes, with Aung Khant behind him on 20,556 votes. 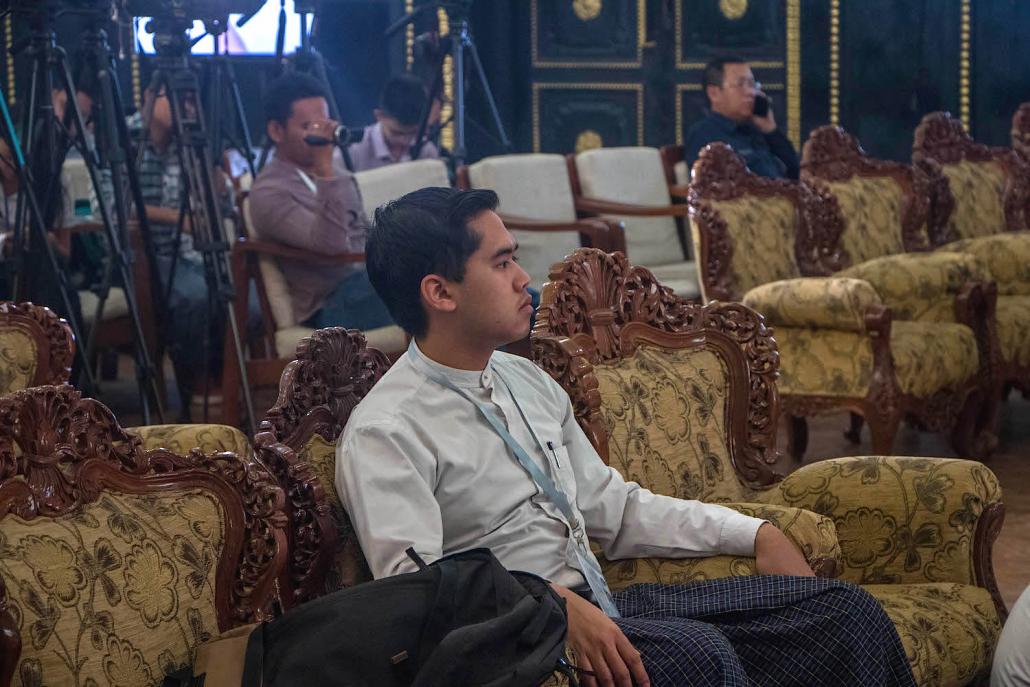 In Constituency 4, which covered the eastern part of central Yangon, businesspeople U Myo Thaw and U Myo Myint ran lavish campaigns. The former, a marketing mogul who runs the Milky Way Group of Companies, took out large billboard adverts in prime locations, which led some to question whether he might be exceeding the legal K20 million limit on campaign spending.

However, Myo Thaw’s big-budget campaign only took him to second place, with 17,409 votes, well behind the NLD candidate, U Sein Ohn, who received 53,816 votes.

One part of the city that defied the NLD landslide was Seikkan Township, where all seats on the township municipal committee were taken by independent candidates. There U Soe Naing, Daw Yi Yi Khaing and U Hla Than, who was elected chairperson.

Aggrieved candidates now have 60 days to lodge challenges to the results with the YCDC election commission, which would trigger a YCDC-appointed tribunal to review the fairness of the contest in question, with the possibility of results being overturned. Candidates must also file itemised campaign expenditure reports within 30 days.

Htet Htet Htun told Frontier that the election for her desired seat on the YCDC executive committee was “not fair” but would not explain why, and said she would not lodge a challenge to the result, because she doubted it would ever be overturned.

He said if the number of votes given to independent candidates were added up, “our votes are more than the NLD’s vote.”

The Yangon Region government, which is controlled by the NLD, drew accusations of abusing its position to promote the ruling party when, on March 26, a post was published on its Facebook page that urged Yangon voters to vote for NLD candidates in the municipal election. It said a vote for the NLD would help deliver “change” for the city. Though it was deleted within an hour, screenshots of the post were shared widely on Facebook.

Naw Pan Thinzar Myo, the Kayin ethnic affairs minister in the Yangon Region government, told Frontier on March 31 that she had taken responsibility for the mistake and was awaiting possible disciplinary action.

She explained that she was the most senior of four administrators of the Facebook account, and that the post had been written by another admin without her permission.

“I’m ready to accept any punishments from the election commission and the [Yangon Region] chief minister. I should have taken greater care,“ she said.

Correction: An earlier version of this article incorrectly stated that only three independent candidates won seats. The actual number was 16.