Negotiation, not coercion, offers best hope of peace in Kachin

A secret meeting in China between the Tatmadaw and the Kachin Independence Organization has raised hope of further talks that could advance the quest for peace, but heavy fighting between the two sides is unlikely to end any time soon.

The KIO delegation was headed by its new leader, General N’Ban La, and the Tatmadaw team was led by Lieutenant-General Tun Tun Naung, Commander of the Bureau of Special Operations-1, which oversees the Northern Command, North Eastern Command and Eastern Command.

It was the first “military-to-military” meeting between both sides without the involvement of third parties since a 17-year ceasefire between was broken in 2011.

Although the meeting did not result in any breakthrough to end the fighting, both sides were reported to be open to the idea of more talks.

In a statement issued on February 8, the KIO said the meeting focused mainly on four issues: de-escalation of the fighting in Kachin and northern Shan states, ensuring stability in the area, an all-inclusive peace process and building a genuine federal union based on the Panglong Agreement signed in 1947 by Bogyoke Aung San and ethnic minority leaders.

The KIO raised the issue of inclusion because its allies in the Northern Alliance – the Arakan Army, Ta’ang National Liberation Army and Kokang-based Myanmar National Democratic Alliance Army – have been excluded from the peace process by the Tatmadaw.

KIO sources say the Tatmadaw used the meeting to demand the withdrawal and dismantling of the Kachin Independence Army’s 4th, 6th, 7th and 8th brigades and its 14th battalion.

The Tatmadaw’s demand raises questions over the significance of the KIA units it wants withdrawn, including where they are based.

Historically, the 4th Brigade is the birthplace of the KIO/KIA. It is in northern Shan, in an area known to most Kachin as the “Kachin sub-state”, and its territory borders areas under the control of the TNLA.

In 1990, a group calling itself the Kachin Defense Army and headed by Mahtu Naw split from the 4th Brigade. It became a Border Guard Force and surrendered its heavy weapons and mortars to the North Eastern Command in line with what was known as the “conversion process”. The headquarters of the KDA are in Kawnghka, in northern Shan’s Kutkai Township.

The 6th Brigade was established on February 26, 2016, at Mongko in northern Shan. Its creation was denounced by the Union Peacemaking Working Committee, which said that expanding the operational capacity of the KIA would have a negative effect on the peace process. In November 2016, the 6th Brigade participated with the AA, TNLA and MNDAA in a series of coordinated attacks on targets in and around the border town of Muse. The offensive was called “Operation Mongko”.

The 7th Brigade was established in 2012 and is stationed at Pangwa, a trading town on the border with China northeast of the Kachin capital, Myitkyina. Pangwa was the headquarters of a breakaway KIO faction known as the New Democratic Army-Kachin, formed in 1989 by Zahkung Ting Ying. In 2006 it transformed into a Border Guard Force. The 7th Brigade has clashed repeatedly with the Tatmadaw and the BGF. The 8th Brigade, established in 2015, was formerly based at Indawgyi in southern Kachin but was forced to abandon its headquarters because of Tatmadaw offensives.

The 14th Battalion is based in resource-rich Tanai Township in northwestern Kachin, an area well-known for its gold and amber mines.  A Tatmadaw operation launched in June 2017 escalated late last year, and about 3,000 miners have been trapped in fighting between the two sides. The Tatmadaw wants to drive the 14th Battalion from the area because of its importance as a revenue source for the KIO.

According to the Tatmadaw, the ceasefire reached with the KIO in 1994 applied to the number of units and territory under its control when the truce was signed. The Tatmadaw says that with the exception of the KIA’s 4th Brigade, the other three were formed after the resumption of hostilities in 2011 and their creation was not in line with the terms of the 1994 truce.

A well-placed source in the KIO says another reason for the Tatmadaw offensives against the 4th and 6th brigades is opposition to their presence in northern Shan.

However, the KIO rejects what it regards as Tatmadaw “coercion” on the grounds that all agreements under the 1994 truce became invalid when fighting resumed in 2011.

It has called on the Tatmadaw not to intimidate but to seek solutions to the conflict through political dialogues.

The KIO has remained defiant. On February 2, it released “Order 2/2018’, stating that two new bridges – 9th and 10th – had been established. The 9th brigade, formed alongside the 6th and 26th battalions, would be stationed at Hpakant, an area renowned for its jade, while the 10th brigade is formed with the 2nd and 17th battalions in northern Shan State.

What can be assumed?

Three assumptions can be inferred from the intense pressure being exerted by the Tatmadaw on the four brigades and one battalion.

First, it can be assumed that the fighting will continue and escalate. The Tatmadaw’s recent land-air-sea training exercise on the Ayeyarwady Region coast involving more than 8,000 personnel has excited speculation that it was held as a warning to ethnic armed groups in Kachin and northern Shan. The Tatmadaw also recently bought six Sukhoi Su-30 fighter jets from Russia, raising speculation they might be deployed in Kachin for air-strikes. According to local sources, Tatmadaw’s fighter jets conducted airstrikes on the 7th Battalion in the third week of February.

Second, it seems likely that an objective of the Tatmadaw operations in Kachin and northern Shan is to increase pressure on the KIO to sign the so-called Nationwide Ceasefire Agreement. The pressure could escalate following the recent signing of the NCA by the New Mon State Party and Lahu Democratic Union that brought the number of signatories to 10. 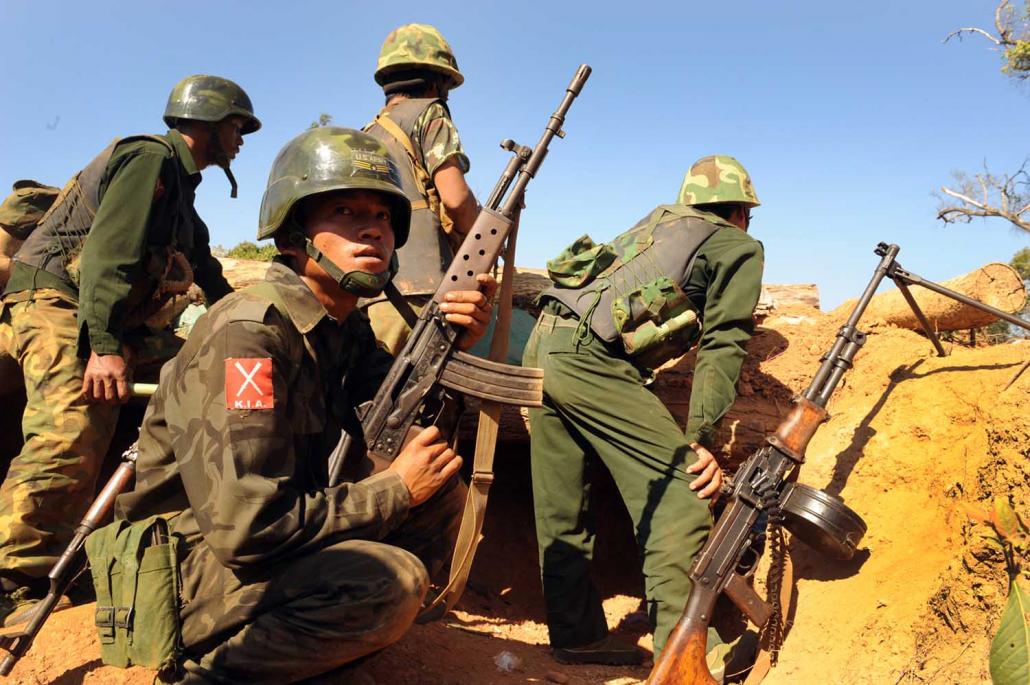 Officials from the Kachin Independence Organization and the Myanmar Army held a meeting in Dali in China’s Yunnan Province on February 1, amid heavy fighting in Kachin and northern Shan states. (Steve Tickner | Frontier)

Finally, it can also been assumed that the Tatmadaw’s offensives against the KIO are aimed at sending a strong warning to other non-signatories of the NCA, such as the AA, TNLA, MNDAA and even the United Wa State Army, one of the biggest ethnic armed groups.

The Tatmadaw was irritated when the Federal Political Negotiation and Consultation Committee was created by non-signatories of the NCA at a summit hosted by the United Wa State Party at its headquarters at Panghsang in April last year.

What can be done?

First, negotiation is a sine qua non for de-escalating the fighting and establishing peace in Kachin and other areas. The meeting in Dali was a positive development and will hopefully be followed by more talks.

Second, the Tatmadaw needs to show magnanimity and accept a role in the political dialogue process for the FPNCC, in which the KIO holds the position of deputy chair. The Tatmadaw should also drop its long-held objection to the AA, TNLA and MNDAA participating in political dialogues.

Third, the Tatmadaw and the government should invite the KIO and all other armed groups to the third 21st Century Panglong Union Peace Conference, which was postponed from late January due to challenges facing the national-level political dialogues. An FPNCC delegation attended the opening ceremony of the second UPC last May but was excluded from participating in discussions.

The time is ripe for the government, Tatmadaw and all FPNCC members, including the KIO, to focus on building trust and finding possible solutions to conflict through dialogue.

The Tatmadaw pressure on the KIO to withdraw its brigades and a battalion might prove to be counterproductive and exacerbate the situation by creating a deadlock from which neither side will benefit and in which peace will continue to be elusive.

Watermelon growers and traders were profiting handsomely from exports to China until border trade was decimated by Beijing’s zero-tolerance approach to fighting COVID-19.
BY Frontier