Players hope the launch of a women’s football league will usher in a new era of success for the national team, which is busy preparing for the Southeast Asian Games in Malaysia in August.

AT JUST 16, San Thaw Thaw is the baby of the Myanmar women’s national team, but you probably wouldn’t guess it. Her confidence belies her lack of experience; she’s certainly not the kind of person to be easily intimidated or overawed. “I don’t have problems when I’m up against the boys on the field. I am good enough to go up against them,” said San Thaw Thaw.

San Thaw Thaw’s self-belief has served her well. She first gained international honours when she was called up for Myanmar’s under-14 team in a match against Vietnam, and now represents Zwekapin FC in the Myanmar Women’s League, which kicked off for the first time in December 2016.

Despite her love for the sport, San Thaw Thaw is equally passionate about her studies. As she trains to represent Myanmar at the Southeast Asian Games in Kuala Lumpur, Malaysia, in August, she is also preparing for her matriculation exams later this year.

“I focus on football, but I also focus on my education,” she told Frontier during a recent gym session with her teammates from the national side. “When I was a child, all I wanted to do was play football, but now I have more responsibilities for my parents and my life.” 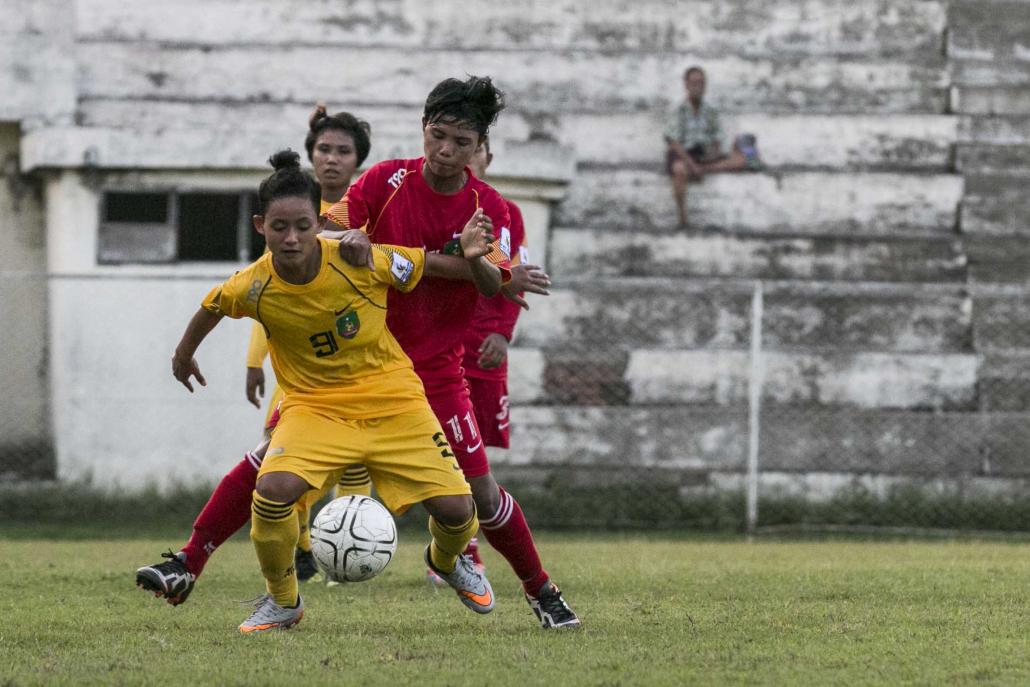 Still, her dream is to become a full time professional footballer. It’s a goal that has been made much more achievable with the establishment of the women’s league, which features seven teams. Zwekapin is the only privately run side; the rest are from the Ministry of Sport and Education, Yangon Region Education Office, military and Ministry of Home Affairs.

For now, though, the SEA Games is the goal. The national team is busy preparing for the biennial sporting carnival under the guidance of coach Roger Reijners, who led the Dutch women’s team from 2010 to 2015. Twenty-six players are presently in camp, from which a final squad of 18 will be selected to represent Myanmar in Malaysia.

A typical day for the team is to get up around 6am and have a light breakfast before training from 7am to 9:30am. They then return to their hostel at the Thuwanna sporting complex, where they have a second, larger breakfast. They have a rest until lunch and then resume training around 2:30pm. Training finishes at 5pm, after which they return to their hostel, eat dinner and go to sleep at 8pm sharp. Training sessions are either in the gym or out on the pitch, with the team split into two 13-player groups. They have weekends off and on Wednesdays there is no afternoon training session, so they have free time instead. 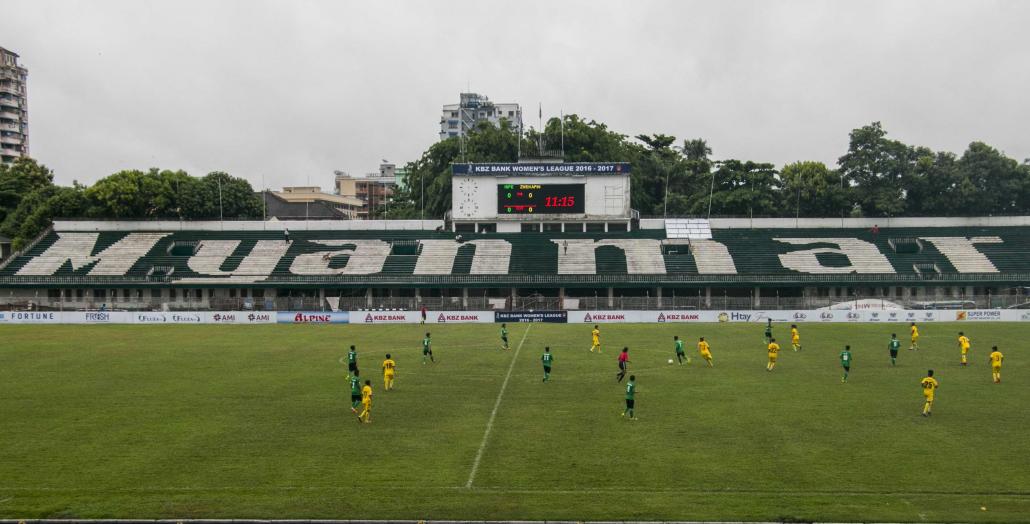 A Myanmar Women’s League match between the Institute of Physical Education and Zwekapin at Aung San Stadium in May. The league, which features seven teams, launched in December 2016. (Nyein Su Wai Kyaw Soe | Frontier)

Reijners said he has seen major improvements during his two years in charge, particularly as a result of changes he has instituted to the players’ training and diet regimes.

“At first I wasn’t happy with the team, but that was just the start,” he said. “I needed to make them stronger and I push them so hard when we work out.”

He’s confident the team will perform well in Malaysia, but acknowledges they’ll be up against some tough opposition.

“I have watched a lot of national league matches and have chosen the best of the best,” he said. “With a lot of hard work I think we could get a gold medal.” 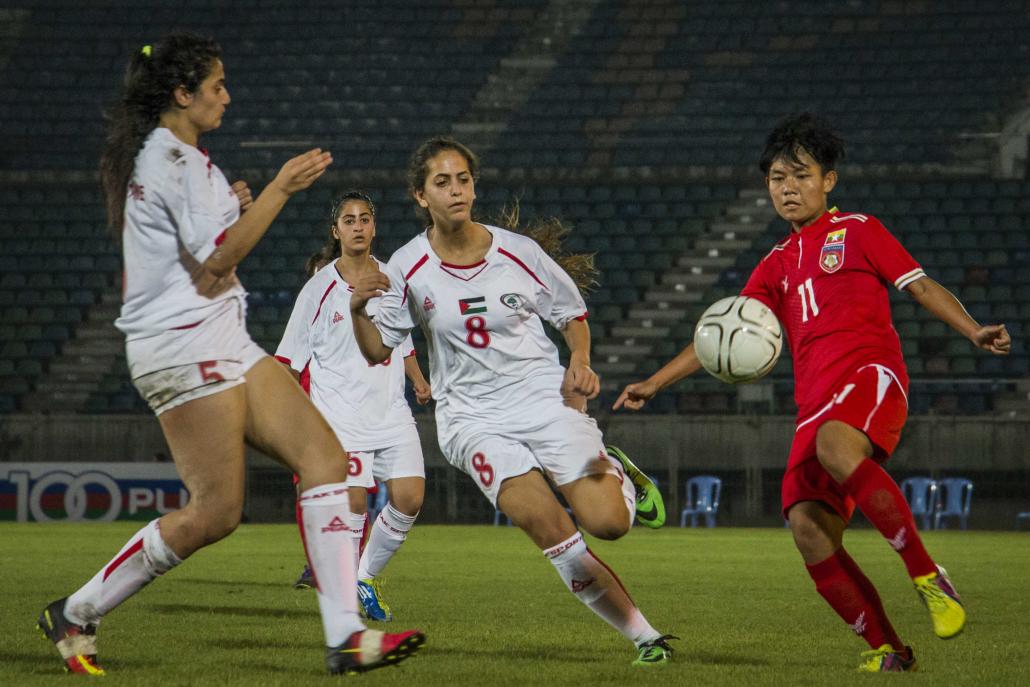 However, Myanmar’s women footballers face opposition both on and off the pitch. While attitudes are slowly changing, there are still many people who argue that women should stick to a more “traditional” role in the home, rather than be out on the field.

San San Maw, 38, is the team’s veteran. She has been representing her country for more than 20 years, including all nine SEA Games during that time. Originally from Yegyi Township in Ayeyarwady Region, she started playing football at a young age despite objections from her parents, who are farmers.

“They said to me, ‘You are a girl, you have to wear girly things,’ and they bought girly things but I didn’t like them,” said San San Maw, who has identified as a lesbian since she was a child.

“At first my parents didn’t like me playing football and being a lesbian, and my eldest sister still scolds me even now. But football has changed my life. I can buy things for my family and have my own life. Now my parents are proud to see me as a professional player.” 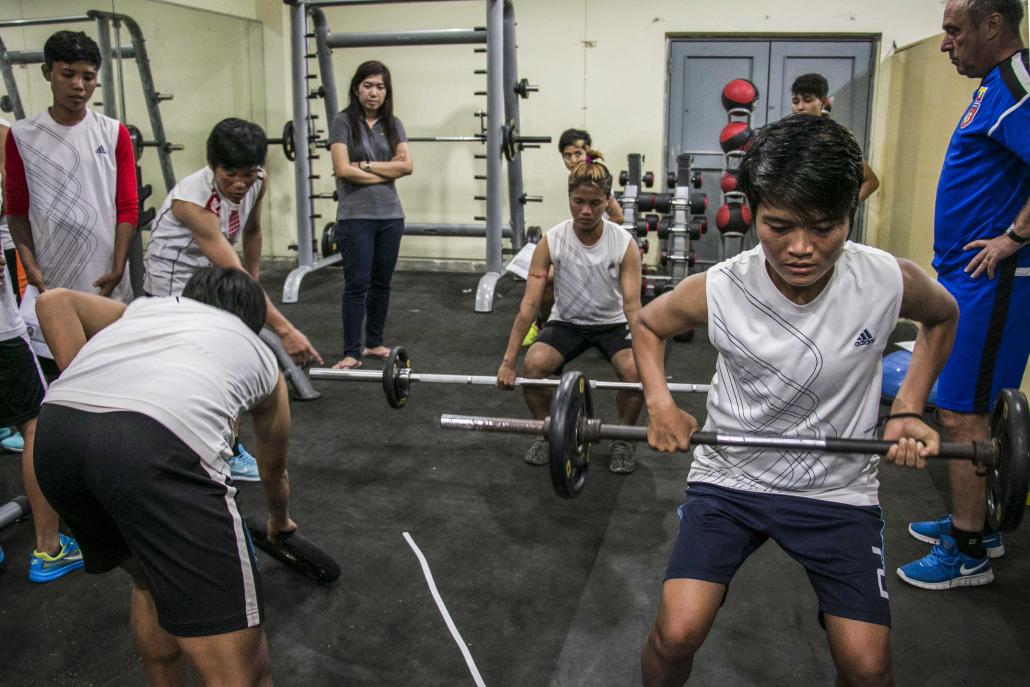 In preparation for the SEA Games, the national team squad is training in two 13-player groups that alternate between the gym and the football pitch. (Nyein Su Wai Kyaw Soe | Frontier)

San San Maw expressed confidence about the team’s chances in Malaysia and spoke highly of Reijners, who she said genuinely cared about all of his players.

She’s also enthusiastic about the long-term impact of launching the women’s league.

“We know there are a lot of differences between us and teams like Thailand. They have money, a training programme and a diet routine, but now we have a national women’s league that can help players to develop,” she said. 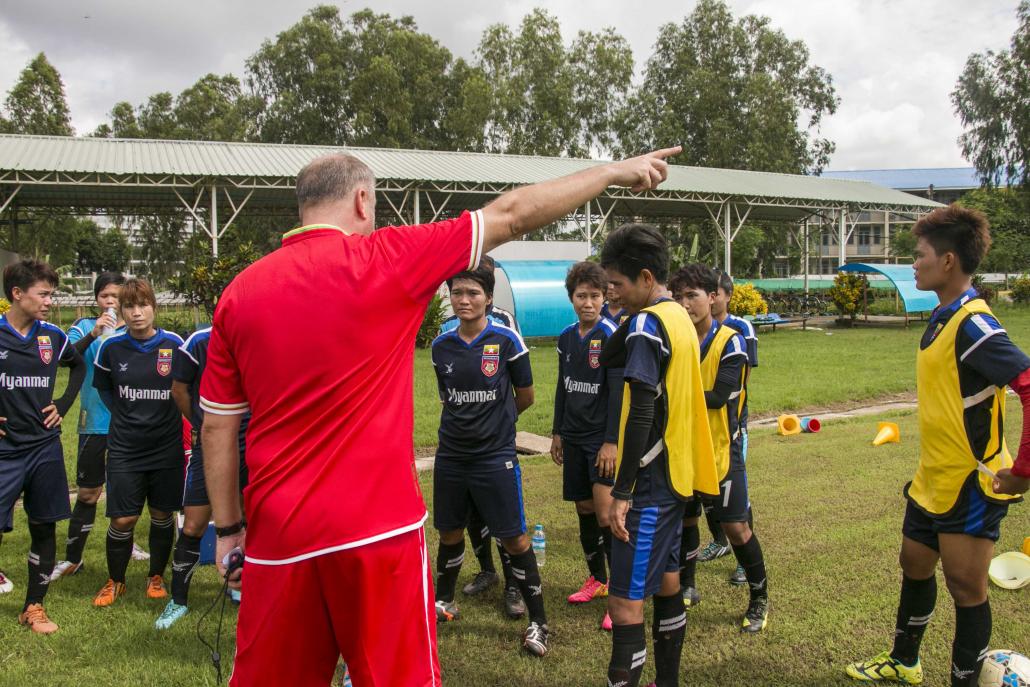 She’s less enthusiastic though about the gap in pay between men and women footballers.

“When it comes to men, our women’s league is different. When we play in league matches, we get low numbers, and paid less. The difference between the two leagues is so different.” 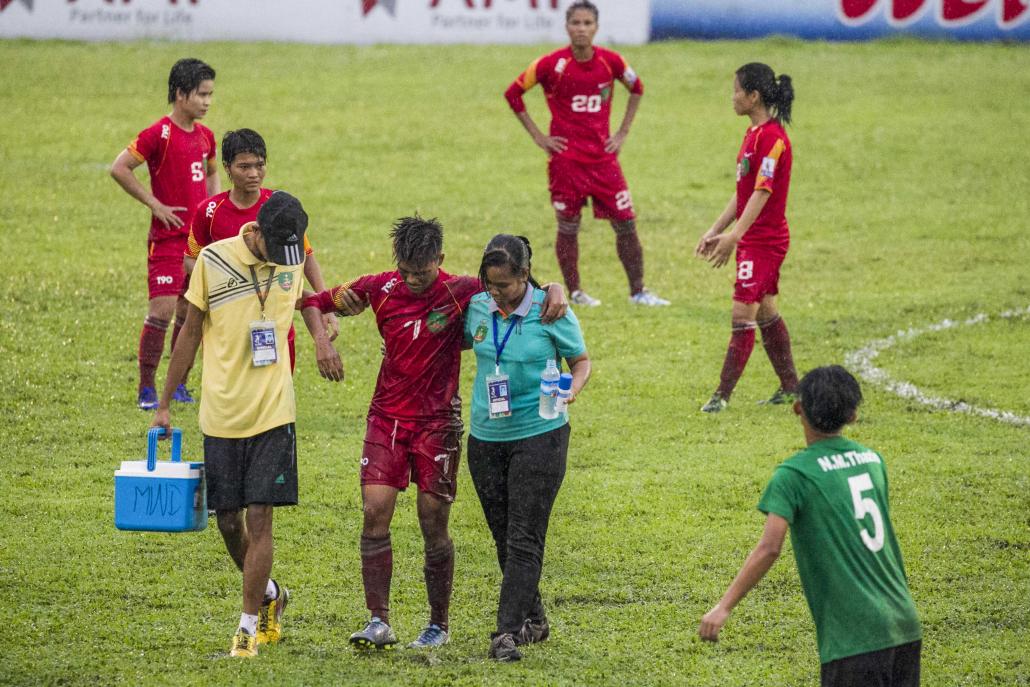 For Win Theingi Htun, 21, who first represented Myanmar at the SEA Games in Myanmar in 2013, the training under Reijners can be hard work.

“The coach pushes us so hard, and sometimes I’m so tired I want to give up. But every time I feel that way, I always think, ‘Some other players are over 30 and I’m only young, so why can’t I?’ So when I think like that, I train harder,” she told Frontier.

She also praised the “sisterhood” of the team.

“We don’t always see eye to eye,” she said, “but we are always patient with each other and take care. That’s the team spirit.”