Myanmar’s vibrant Hindu community relishes its freedom of faith, but economic and political exclusion leads some to return to their ancestral grounds.

Signs of a vibrant Hindu community are everywhere in downtown Yangon; ornate temples peer out from between the tenements, and periodic festivals enliven the streets with rhythmic music, colourful costumes and offerings of sweet masala chai. With their roots in several waves of Indian migration during the British colonial era, Myanmar’s Hindus are thoroughly a part of the country’s intricate cultural fabric.

The term Hindu typically refers to people of Indian or Nepali origin who practice Hinduism as a religion, but it is also used more broadly to refer to their diaspora. While many of Myanmar’s Hindus say they enjoy broad freedom of religion, a lack of political representation and economic opportunity seems to be shifting some of the population back to the land of their ancestors. 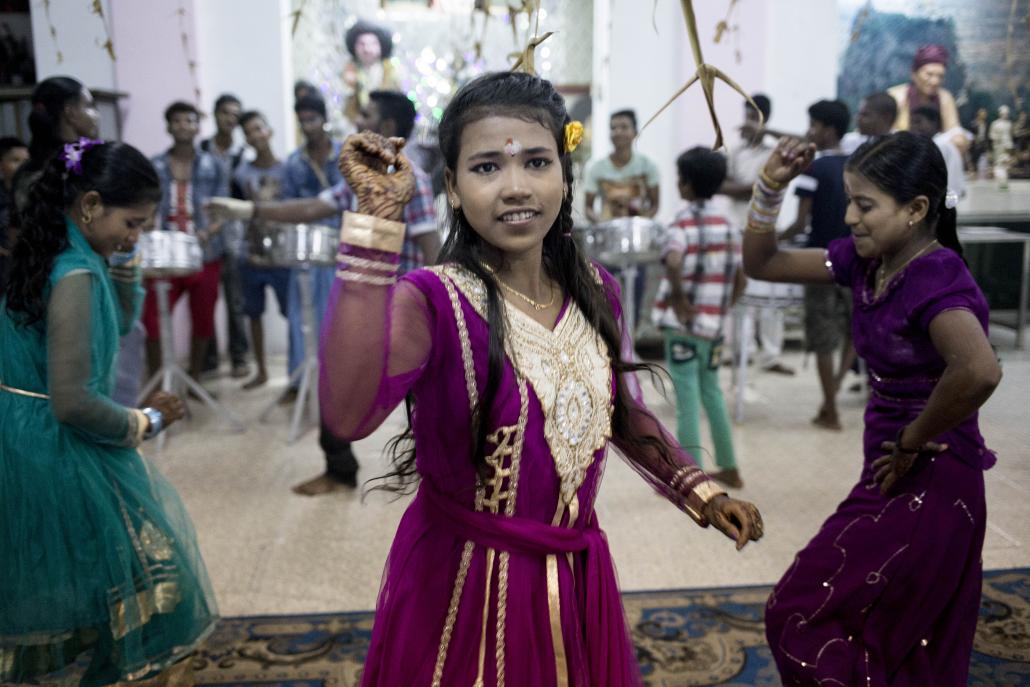 “My grandparents came to Burma in 1894 to grow sugarcane,” said U Brajesh Verma, referring to the country by its former name. Now chairman of the Myanmar-Hindu literature Association and a native of Phyu Township, in Bago Region, both of Verma’s parents were born in Myanmar, though his grandparents were Indian citizens.

“Since the time of General Ne Win’s government in 1962, Hindus have been given freedom of religion,” he told Frontier, “but due to restrictions on business activity, hundreds of thousands of Indians have returned to India. Many of my relatives had left, but I chose to stay… whatever will be, will be.”

Verma’s family was among the “second wave” of Indian migration. According to Hindu astrologer Tun Tun, there were three. First came civil servants of the British colonial government; then farmers who cultivated rice, beans and sugar cane; and lastly, the merchants and businessmen, who gained an early foothold in several sectors of the economy. 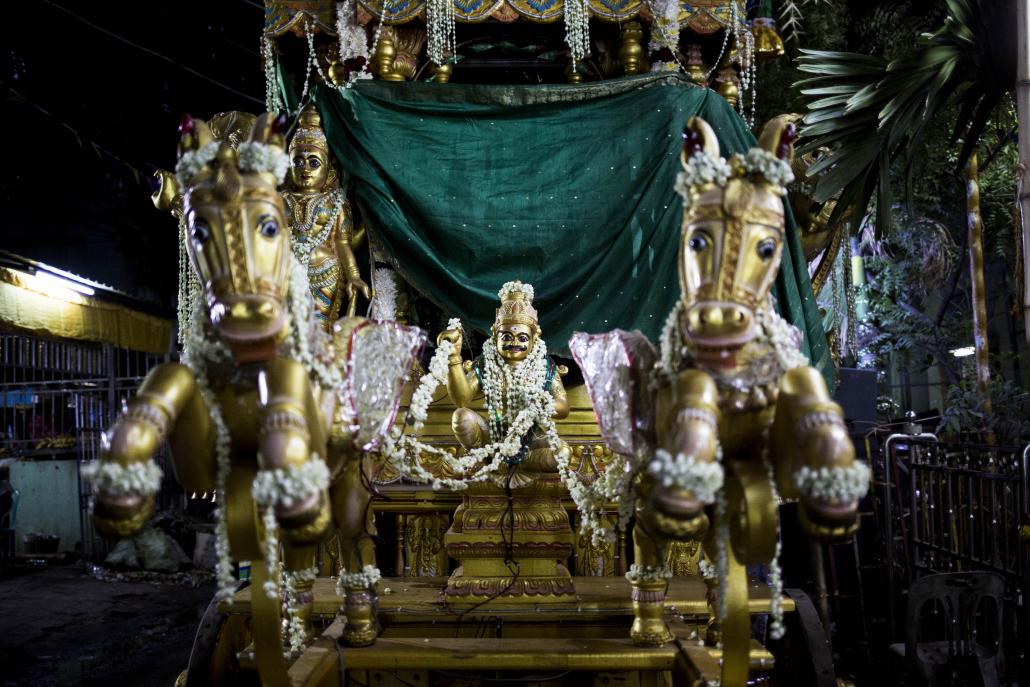 Hindus have long lived peacefully in Myanmar, Verma said, because they “never interfere in anything.” Because of their cordial relationship with the country’s other diverse peoples, authorities have offered Hindus the freedom to practice their religion and preserve their culture through public festivals and ceremonies.

“In Myanmar, Hindus are given the most freedom of religion,” he said, relative to other faiths besides Buddhism, which is practiced by the majority of Myanmar citizens.

Hindus worship both Buddha and Hindu deities, such as Krishna, Vishnu and Kali. Their day of worship varies from one temple to another, and the Hindu calendar boasts about 25 lively traditional festivals. The highest Hindu holiday is Diwali, the festival of light, which lasts for about five days, culminating in a night of exquisite attire, family feasts and lantern-lit celebration. 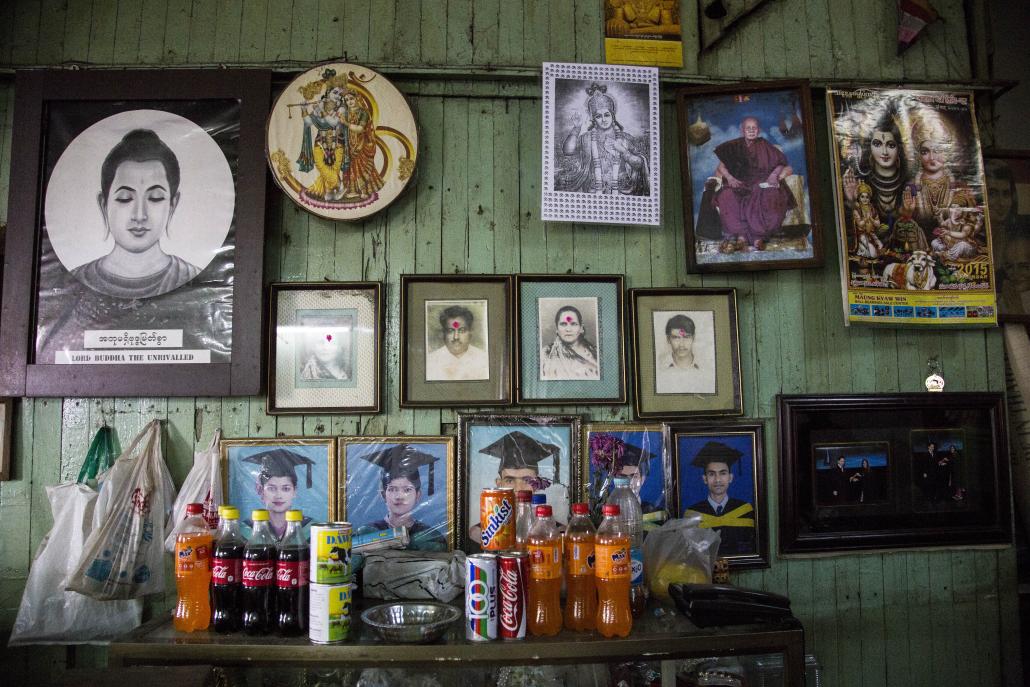 But while Hindus are relatively free to practice their faith, they remain political and economic outsiders in Myanmar. In a general election last November, Myanmar’s first freely elected poll in decades, not a single Hindu lawmaker was elected to Parliament or appointed to senior executive positions.

“We used to have a representative,” Verma said, noting that the leaders of Myanmar and India had historically worked together quite closely. “There should be someone who would speak for Hindus in Parliament, but there are [only non-governmental] associations related to Hindu temples.”

Verma said Hindus were categorically excluded from advancing as civil servants, peaking at the level of director general in government departments. Over the years, he said, many Hindu government workers had left the country because they stopped being promoted once they reached a certain level of success.

He expressed optimism, however, that the new government led by the National League for Democracy, the party of Aung San Suu Kyi, would usher in a new era of equality and prosperity. 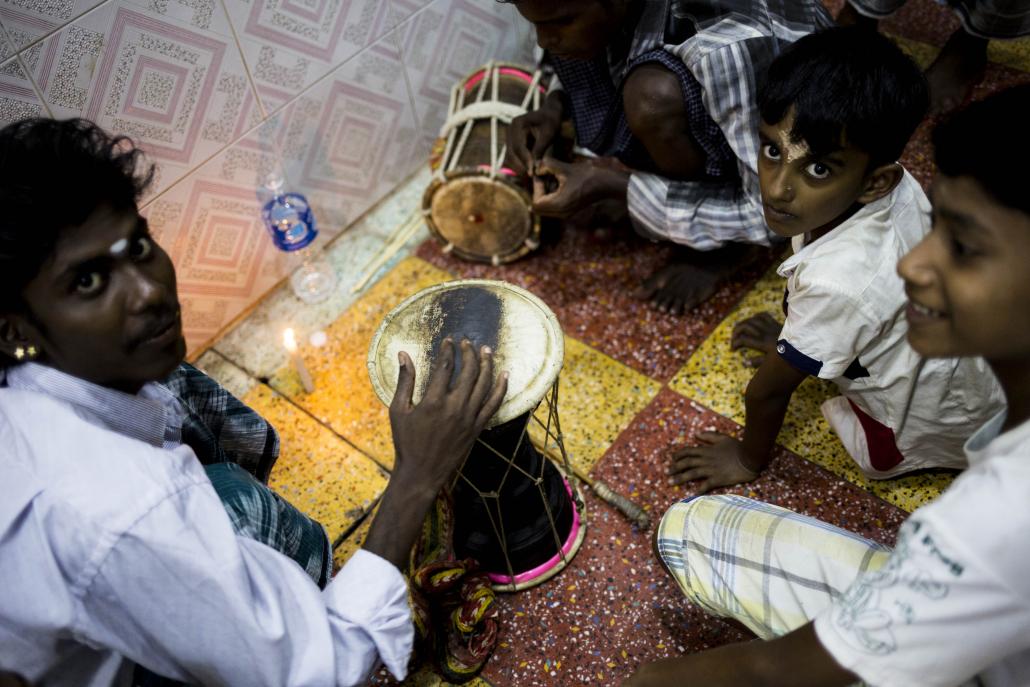 Achieving equal opportunity for Myanmar’s Hindus will require a great deal of political determination, according to U San Min Naing, a teacher and a member of the Hindu community in Yangon.

Like many of his friends and peers, his family came to Myanmar to work in the traditional medicine business. But over time, the role of Indian people in Myanmar society transformed. San Min Naing told Frontier that Hindus often worked “the lowest jobs”, sometimes being employed for such tasks as “handling dead bodies, which others don’t want to do.” 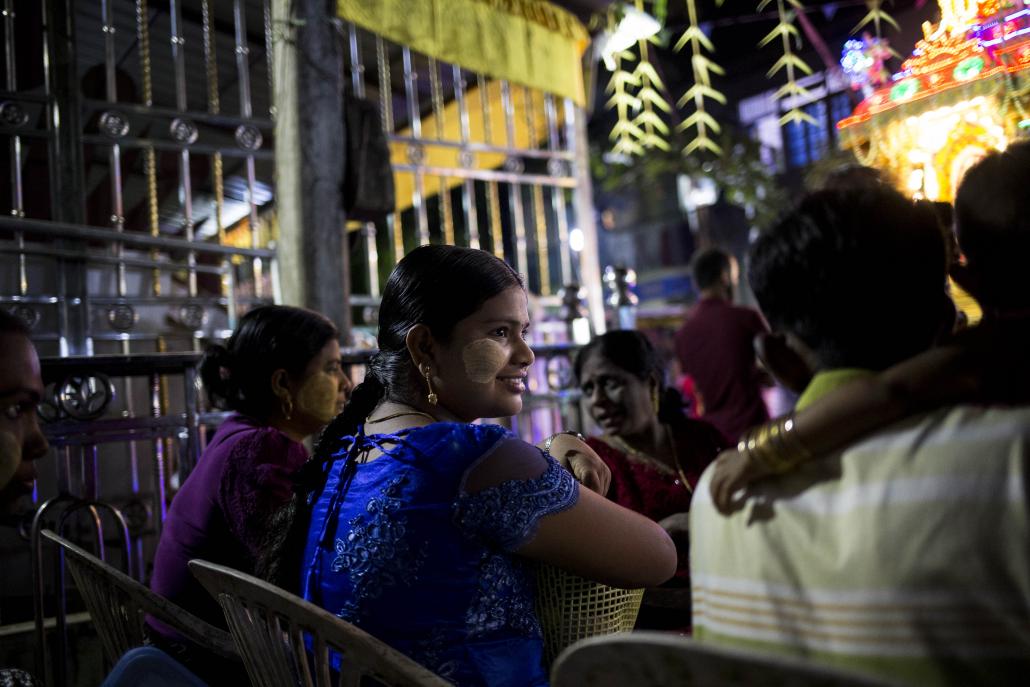 The biggest problem for Hindus who wish to advance in society is that they have difficulty obtaining National Registration Cards, known as NRC. The coveted documents are meant to be available to all Myanmar citizens, providing proof of their identity and origins.

Many people of Indian descent, however, have complained of being denied NRC cards for various reasons; some have been advised to misrepresent their ethnicity, others have been caught up in an endless bureaucratic ping-pong match, being sent from one office to another until they simply give up.

Verma said his family also had trouble obtaining the documents, but, similarly, he “cannot understand why”. The NRC card is indispensible for Myanmar citizens; it is required for almost all official transactions ranging from registering a business to buying a train ticket. 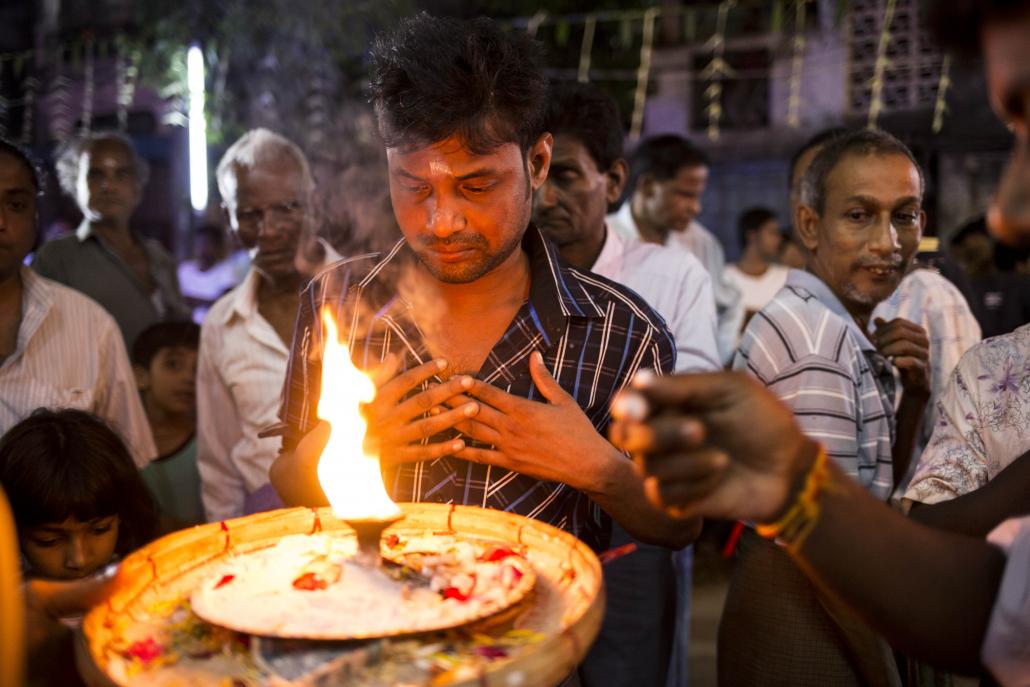 It is still unclear to what degree discrimination has dented Myanmar’s Hindu population, which was estimated to be about 820,000 strong in 2010, according to the Pew Research Centre. Both men said that a shortage of opportunities led some to seek better work in India, and San Min Naing suggested that many may have left before 2010 in response to repressive policies of the country’s former ruling junta.

It was a difficult decision to make, he said, because the birthplace is very important in Hindu culture; those who were born here are not inclined to leave. Despite their commitment to the place of their birth, “some feared the military government would suppress them, and they went back,” San Min Naing said. 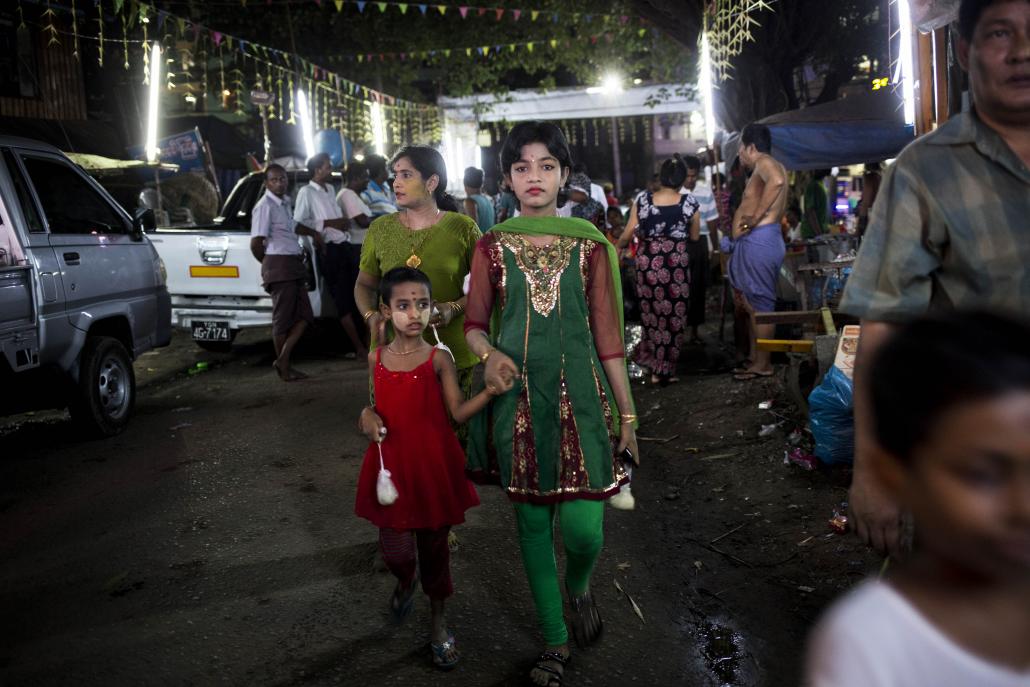 Despite the hardships of the past, Hindu culture has endured in Myanmar, and San Min Naing believes that different cultures can continue to coexist peacefully as long as they are granted equal rights.

“Hinduism and Buddhism are like the head and the tail; they are both based on the four cardinal virtues,” he said, referring to a shared code of ethics among the two religions, which both value non-violence, truth, purity and discipline.

“Everything is okay when there is love and loyalty among different religions,” U San Min Naing said. “There will be peace if we do things together equally, and do our own things separately.” 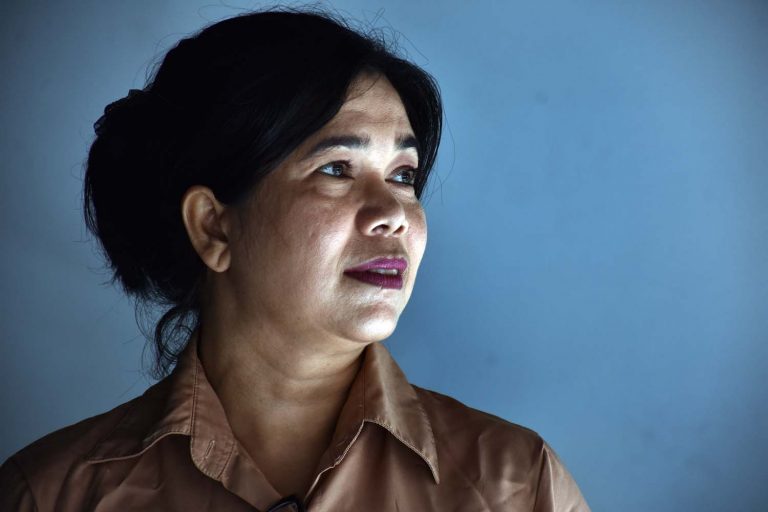 A group of Muslim candidates hopes to defy the community’s marginalisation by winning seats in the November election.
BY Ei Ei Toe Lwin