The cries of amorous swiftlets echo around the dark room, an unlikely gold mine for traders in southern Myanmar who are cashing in on rising demand for the edible nests from China’s growing middle class.

Dozens of buildings dedicated to the tiny birds have sprung up around Bokpyin in recent years, their grey concrete structures towering over the humbler wooden and brick homes of the town’s human inhabitants.

Every morning and evening the air is filled with high-pitched twitterings blasted from loudspeakers that draw thousands of the swallow-like birds home to roost.

Edible birds nests have become one of the main industries in the town, traditionally known for producing the chewable stimulant betel nut as well as rubber and palm oil.

Traders can charge around US$2,000 a viss (equivalent to 1.63 kilograms) for the tiny nests — more than the average person in Myanmar earns in a year.

“We started making man-made bird nests (houses) 10 years ago,” said Paing Set Aung, who owns one of the buildings where hundreds of swiftlets make their homes in the rafters.

“Initially there was a house where the birds came to roost by themselves. After that, people started to construct man-made bird houses.”

Most of the tiny white nests, which are made from solidified bird spit, are sold to neighbouring China.

Long considered the reserve of the country’s wealthy elite, who ate them during lavish banquets, they are in increasing demand from middle-class consumers.

Today the global edible birds nest industry is estimated to be worth $5 billion, most of it produced in Southeast Asia.

Myanmar’s exports have surged since 2011 — the year the former junta handed over power to a quasi-civilian government.

“Bird nests are one of the main businesses in Bokpyin,” said local Lin Aung, who built his first house five years ago and is now on his third.

“China is the top buyer of bird nests here.”

‘Caviar of the East’

Once across the border, the nests are transformed into one of the most expensive foods in the world.

When boiled in water they dissolve into a gelatinous gloop which is then made into desserts or drunk as a soup or a tonic that is said to prolong life and improve strength.

There is little peer-reviewed scientific data showing that nests have proven medicinal properties. Nutritional studies have shown the saliva to be mainly made up of protein, followed by carbohydrates.

In Shanghai restaurants sell the “the caviar of the East,” as it is known, for hundreds of dollars a bowl. 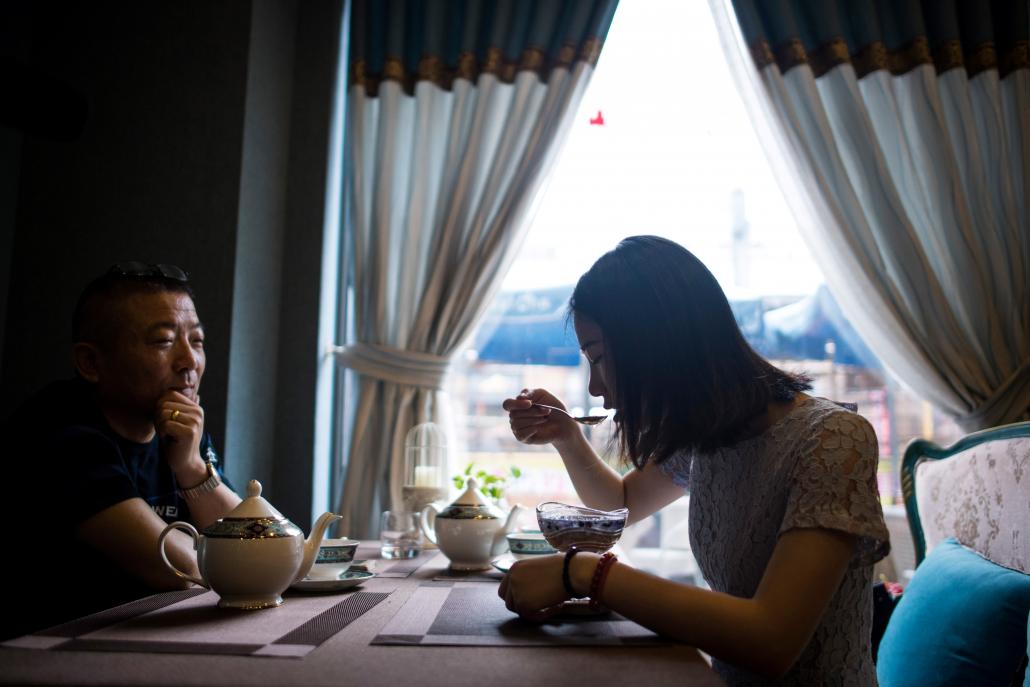 Many of them cater specifically to women, who believe the nests can help smooth the complexion and make them look younger.

The tonic is also said to help during pregnancy — one of Shanghai’s high-end spas solely for mothers-to-be even has its own restaurant and sells gift bags for as much as 3900 RMB ($566).

Shoppers can also order the products online, including candied birds nests from Myanmar to be eaten as sweets.

“In China, the bird nest has been a really famous and much-loved traditional tonic since ancient times,” Zhang Yi told AFP inside her NestCha restaurant.

“It is mild and a little sweet. It is good for women, the elderly, children and men.”

These luxury products are a far cry from the nests’ humble beginnings on the islands of Myanmar’s southern archipelago.

To begin with they were harvested on the region’s many islands by daring climbers who risked life and limb scaling treacherous cliffs without any safety equipment.

For years the industry was dominated by the Union of Myanma Economic Holdings Ltd (UMEHL), a sprawling conglomerate controlled by the military elites that ran Myanmar for half a century.

But, as in much of Southeast Asia, production has increasingly moved into urban centres.

Locals in the southern city of Myeik started building houses to attract the birds decades ago, then later production spread to Bokpyin and nearby Kawthaung.

There are now more than 130 houses devoted to the swiftlets dotted around the region, according to state media.

Competition for space in Bokpyin between bird nest producers and tourism developers has seen land prices surge to as high as $75,000 a plot in downtown — on a par with parts of the commercial capital Yangon.

Nests are normally harvested three or four times a year, but traders can collect them often as once a month if they are in need of cash.

Producer Aung Kyaw Moe said that, because the swiftlet populations naturally increase as the birds become accustomed to their homes, the industry will only grow in the coming years.

“They are like humans because they come and live here after they get to know the place,” he told AFP, standing next to his tall wooden bird-house in Myeik.