YANGON — The Ministry of Religious Affairs and Culture on Friday called on foreign diplomats to encourage members of the World Heritage Committee to grant World Heritage status to Bagan when the committee meets in June.

At an event at the National Museum in Yangon, deputy religious affairs and culture minister U Kyi Min told diplomats and representatives of the World Bank and the Japan International Cooperation Agency that Myanmar was looking forward to securing World Heritage status for Bagan with the support of the international community.

“I believe you all agree that Bagan should be a World Heritage site. May we again ask you to inform your governments to recommend that Bagan be included on the list,” Kyi Min said to the diplomats, including those from Australia, China, France, India and South Korea.

The United Nations Educational, Scientific and Cultural Organization’s World Heritage Committee, with members drawn from 21 countries, will decide on Myanmar’s final nomination dossier for Bagan at a meeting in Azerbaijan between June 30 and July 10.

At the event in Yangon, Kyi Min told Frontier that Myanmar’s parallel application for World Heritage status for Mrauk-U, the former capital of the Arakan Kingdom in present day Rakhine State, would go ahead despite fighting between the Tatmadaw and the Arakan Army that has reportedly damaged some of its temples.

The government plans to submit the final nomination dossier for Mrauk-U in September, ahead of a February 2020 deadline. Kyi Min said the ministry expects the fighting to be over soon, and said that it would not affect the application process.

“We just need to complete the management plan and the map. We believe we can finish this in time [for the deadline],” he said. 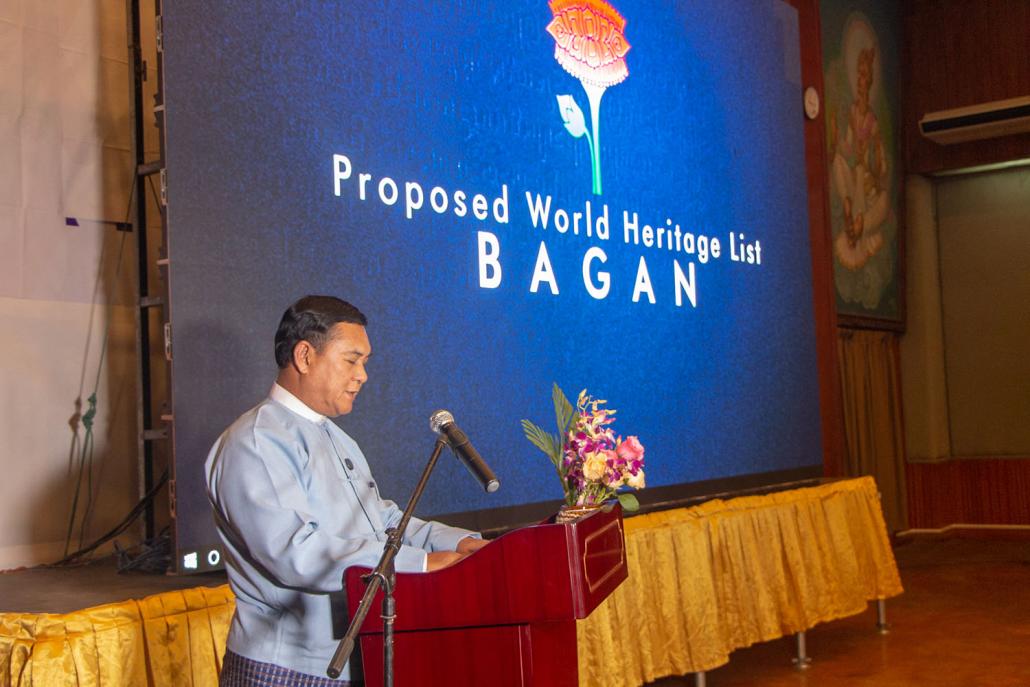 Deputy Minister for Religious Affairs and Culture U Kyi Min gives a speech at the National Museum in Yangon. (Thuya Zaw | Frontier)

Myanmar’s long-running effort to gain heritage status for Bagan, which began 24 years ago, has been plagued by challenges and controversies, including over renovations that critics say have compromised the architectural integrity of the site, and inappropriate commercial development.

In Myanmar’s final dossier, submitted in January, it pledged to implement a management plan for the Bagan heritage zone that covers local businesses, social issues, agriculture, transportation and tourism, among other things.

U Kyaw Oo Lwin, director general of the Department of Archaeology and National Museum said on Friday that China and Australia are close friends of Myanmar and their support at the conference would be helpful for Bagan. “I would like to request that you support [our application] for the World Heritage list,” he said at the event in Yangon.

If the application is approved, Bagan would become Myanmar’s second entry on the list, after UNESCO added the Pyu Ancient Cities of Hanlin, Beikthano and Sri Ksetra in 2014.

Daw Ohnmar Myo, a former project officer at UNESCO’s Myanmar office, told Frontier that Bagan’s heritage would not be preserved if it does not receive World Heritage Status at the upcoming meeting in Azerbaijan. But she said she was confident that the World Heritage committee would look favourably on the application.

The committee may refer the application back to the government, as in 1996, when the nomination for Bagan was referred back to the military junta because it lacked a boundary definition and a legislative and management plan.

If this were to happen again, the committee would provide guidance on the next steps, and would specify a timeframe in which Myanmar could reapply, Ohnmar Myo said.

After an earthquake in 2016, many of Bagan’s ancient pagodas and temples were damaged, raising concern about the future of the site. At the time, the Department of Archeology and National Museum announced that 300 monuments needed renovation.

A 2017 survey by the Association of Myanmar Architects showed that there were 3,822 monuments in Bagan, including temples, stupas and monasteries.