A timeline of the Japanese invasion, British defeat, Allied reoccupation and political turmoil that would set the stage for an independent Burma.

Under the command of Kuomintang Generalissimo Chiang Kai-Shek, the Chinese Nationalists begin work in 1937 on the 1,154-kilometre (717-mile) Burma Road, connecting Kunming in Yunnan with Lashio, and ultimately Rangoon, to help supply their beleaguered forces in China.

The Burma Road – along with Burma’s rubber, oil and other resources, and the country’s proximity to British India – make the country instrumental to Japan’s plans to dominate Asia.

Aung San, then a 25-year-old activist, would soon be recruited by the Japanese to nurture an anti-colonial movement in Burma along with a hand-picked team that would be known as the “Thirty Comrades”.

Japan forces Thailand into an armistice and immediately attacks British Malaya, the Philippines and Hong Kong. Already embroiled in a war in Europe, Britain declares war on the Empire of Japan.

Burma was only defended by two divisions – the 17th Indian Division and the 1st Burma Division – but at the time the Allies, underestimating Burma’s strategic value and overestimating its jungles, mountains and rivers as natural defences, did not expect an invasion by the Imperial Japanese Army.

Japanese forces begin the invasion of Burma by capturing a British airfield at Victoria Point (Kawthaung) at the country’s southern tip, cutting off British reinforcements bound for Malaya.

The Allied Commander-in-Chief, India, General Archibald Wavell, (who had previously fought the Germans in North Africa) scrambles to rally Burmese forces for a counterattack with assistance from the Chinese Nationalists, but it is too late. 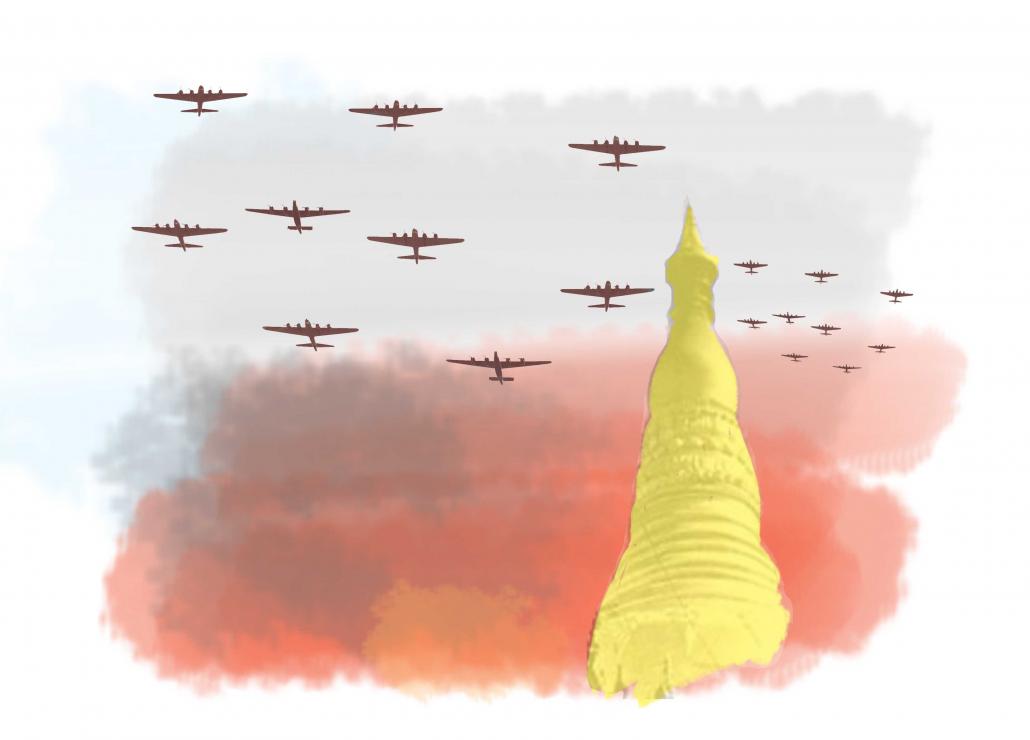 Fighter planes from the British Royal Air Force and the 1st American Volunteer Group (the “Flying Tigers”) fight valiantly, but continued attacks over the coming months will devastate the city.

Retreating ahead of a smaller but more experience Japanese force, the 17th India Division – comprising British, Indian and Burmese troops – makes a stand at the bridge over the Sittaung River (about 140 kilometres by road northeast of Rangoon). The Battle of the Sittaung Bridge is a disaster. Allied forces destroy the bridge to slow the Japanese advance, inadvertently trapping two Indian brigades on the eastern side of the river.

The Japanese find another way to cross the river and continue their rapid advance on Rangoon.

After days of bitter fighting at Pegu (Bago) and Taukkyan, British forces secure a retreat towards Mandalay. The Japanese Imperial Army enters an undefended Rangoon.

As Chinese Nationalist forces head for Yunnan, retreating British and Indian troops, together with thousands of British and Indian civilians, endure a grim journey towards the safety of northeastern India. Thousands of civilians perish from hunger and disease during the exodus through mountains and jungles to the Indian border.

As the Japanese plotted their invasion of Southeast Asia, they had been nurturing an anti-British network in Rangoon and giving General Aung San and the other members of the Thirty Comrades military training on Hainan Island, then occupied by the Japanese. Most of the Thirty Comrades, the nucleus of the Burma Independence Army, had returned with invading Japanese forces through southern Burma in 1941.

In the coming months, under the guidance of Japan’s Colonel Keiji Suzuki (who called himself Bo Mogyo, or “Thunderbolt”), the BIA’s efforts to recruit volunteers were aided by the nationalist sentiment it aroused.

The BIA would grow to about 18,000 soldiers, although many were untrained and underequipped and there were problems with maintaining discipline.

The BIA (which would be refined and re-branded the Burma Defence Army, a forerunner of the Tatmadaw) saw some action but left the heaviest fighting to the Japanese. However, tensions grew between the Bamar and ethnic minority groups that had been loyal to the British, including the large Karen population in the Irrawaddy Delta. Mutual suspicion ended in violence and atrocities on both sides and the suppression of the Karen planted the seeds for what would become a 70-year civil war.

The Japanese establish a provisional Burmese government with pre-war nationalist leader Dr Ba Maw as its head and Aung San as Minister of War. The Burma Defence Army is re-named the Burma National Army.

Ba Maw’s government was fond of pomp and showboating, but the Japanese clearly held power. Life under the Japanese was as often brutal, with constant arrests, interrogations, executions, looting, sex slavery and forced labour.

Burmese were among the 180,000 Asian forced labourers and 60,000 Allied prisoners-of-war who toiled on the infamous Death Railway, built by the Japanese to link Kanchanaburi in Thailand with Thanbyuzayat, about 60 kilometres south of Moulmein. The barbaric conditions under which they were forced to work claimed the lives of about 90,000 Asians and 12,400 Allied POWs. 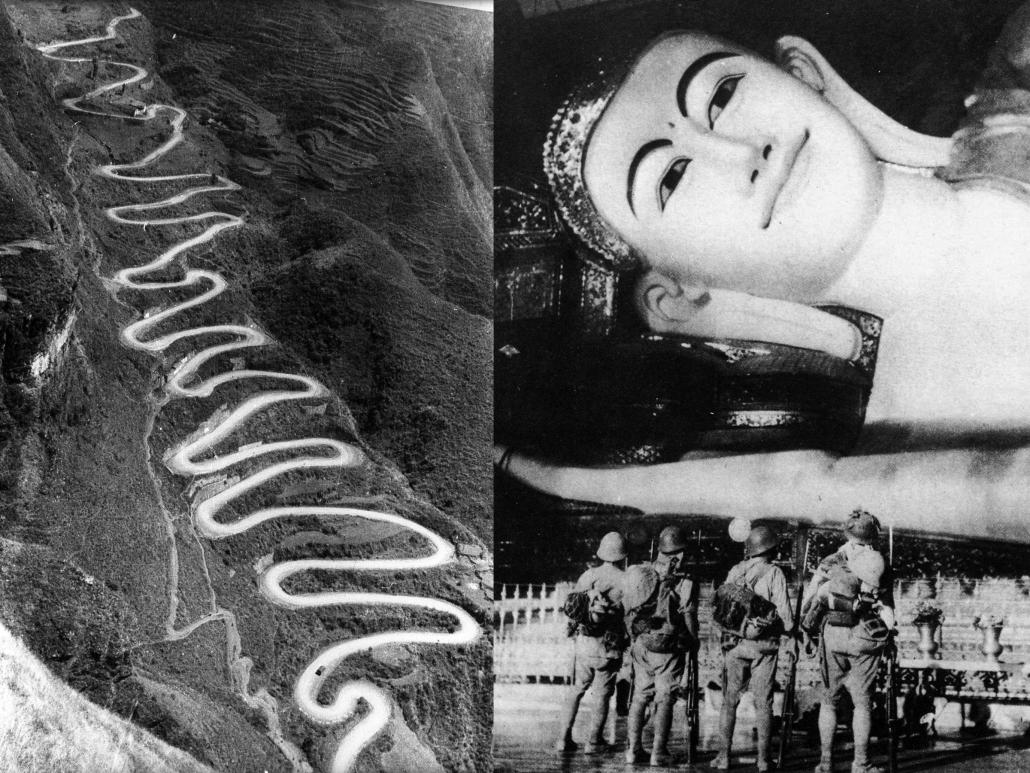 With the Americans steadily advancing across the Pacific and the Axis powers in  retreat, the Japanese throw everything they have into a doomed attempt to invade India through the border town of Imphal, in northeastern Mizoram State.

The defeat of the Japanese at Imphal and nearby Kohima is a turning point that leads to the rout of their forces in Burma. Allied forces are assisted by British and Indian special operations units known as the Chindits, who conduct operations far behind Japanese lines to disrupt the delivery of supplies.

Allied forces begin their gradual reconquest of Burma, memorably described by Field Marshal William Slim, commander of the British 14th Army, in his book, Defeat into Victory. The 14th Army crosses the Irrawaddy and Chindwin rivers.

To secure central Burma, British forces send a diversionary assault to Mandalay while deploying a greater force to capture Meiktila to the south. The offensive would be long and brutal (and end in the almost total destruction of both cities), but would prove the death blow to the Japanese army in Burma.

The Allies race to capture Rangoon before the start of the rainy season. Meanwhile, a resistance movement has been brewing in the capital. It is headed by Aung San (who has eschewed his former pro-fascist rhetoric) and other nationalist leaders, who form the Anti-Fascist People’s Freedom League and begin secretly colluding with the Allies.

On what is now honoured as Armed Forces Day, Aung San marches the BNA out of Rangoon on the pretence of fighting the advancing British only to turn on the Japanese and assist the Allies in capturing the capital.

On May 16, Aung San meets Slim at Meiktila and tells him of the AFPFL’s intention to help the Allies drive the last of the Japanese from Burma. Slim later describes Aung San as a promising candidate to lead Burma after the war.

Burma is a shambles. Rangoon has been devastated by air raids and plundered by the retreating Japanese, and major cities such as Meiktila and Mandalay are in ruins.

The AFPFL shares a boisterous political landscape with returning politicians, communist and socialist groups, resistance fighters and ethnic militias – many of whom had given their everything to fight the Japanese and want a place in the future of their nation.

The war in Burma is over, but modern Myanmar’s troubles are just beginning.