YANGON – A small band of demonstrators blocking the gates of Kyay Thun Pagoda to demand the government’s resignation have been ordered to disperse by police, as the protest enters its second day.

Around 70 monks and supporting laity blockaded the pagoda, near the eastern entrance of Shwedagon Pagoda, at 3pm on Thursday, vowing to continue their protest until the government stepped down. Numbers had dwindled to less than 30 by the evening.

According to pamphlets printed by the group, the protestors have accused the National League for Democracy of leading an ‘authoritarian’ government that was damaging to the country’s Buddhist majority, and favoured ‘Bengalis’ — a reference to the Rohingya community in Rakhine State — over the country’s officially recognised ethnic races.

The pamphlets also claim the government “thinks highly of foreign academics” and neglects the work of their local counterparts, and has been unable to carry out urgent development tasks since the NLD took office in March 2016.

A police contingent ordered the group to disperse late on Thursday evening, but did not take action to enforce the order.

A similar protest by the same group is also underway in Mandalay.

The State Sangha Maha Nayaka Committee, the country’s supreme monastic authority, has been instructed by the Ministry of Religious Affairs and Culture to resolve the protests. 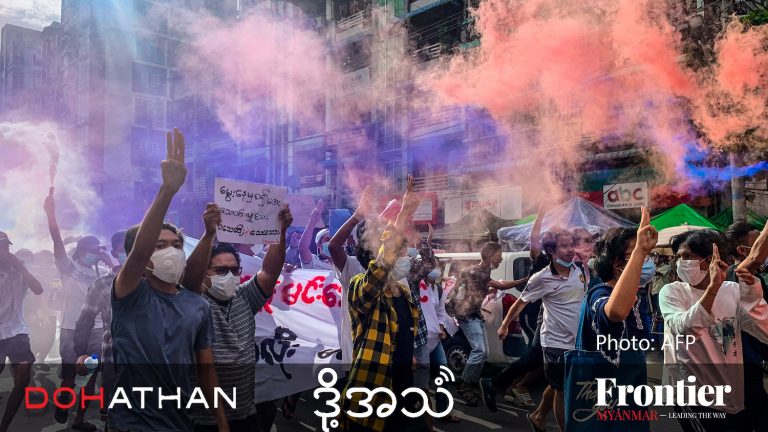 Young people in Myanmar have joined the resistance against the military in many forms, from the Civil Disobedience Movement (CDM) to armed uprising. In urban centres, many youth continue to conduct peaceful anti-coup protests, despite the risk of arrest, torture or worse.
BY Frontier