While interfaith marriage has been a hot topic in recent years, mixed ethnicity marriages can also be a sensitive issue in Myanmar, where women in particular come under pressure to shoulder the burden of cultural preservation by marrying within their ethnic group.

MIXED MARRIAGES can be a sensitive issue in any society. In Myanmar, there is a powerful expectation to marry within the same ethnic group and it applies especially to women.

It’s an expectation that seems to be universal throughout the country, running across ethnic lines. Many Myanmar who are proud of their background want their children to marry within the same ethnic group to preserve its culture and traditions, said Khanu Pang Tain, a Naga from Lahe Township in Sagaing Region who now lives in Yangon and works as a tutor.

He acknowledged that in Naga society there was much more pressure on women to marry within the ethnic group than on men.

“I am not being forced by my family to marry within our society, but my sister is always being advised against having a relationship with a boy who is not a Naga,” said Khanu Pang Tain, 22.

“I think that women should marry within the same ethnic group,” he said, adding that, as a man, even if he married someone from another ethnic group it would not affect his standing as a Naga.

“But a women [who marries outside her community] will have to follow her husband and the culture that he values.”

It’s an argument that is appreciated by an ethnic Rakhine, Ma Aye Aye Khine. A resident of the state capital Sittwe, she said she had long agreed with her mother’s advice to marry a Rakhine. Marrying another Rakhine would help to protect and preserve Rakhine culture, Aye Aye Khine said.

“When a woman is married to a man from another ethnic group, the children are regarded as belonging to the same group as the father and it is hard for the wife to maintain her own culture,” she said.

Aye Aye Khine said that when she left Sittwe to study in Yangon, her parents had advised her against developing a relationship with a Bamar. Her brother was given the same advice when he moved to Yangon, she said.

Naw Htee Eh Soe, a Sgaw Karen from Pathein Township in Ayeyarwady Region, said her parents also want her to marry within the ethnic group.

“I think that if a couple is from a different background and community, there is a greater possibility of problems in the relationship,” she said, adding that such marriages were also vulnerable to difficulties caused by members of the ethnic group to which the husband and wife belonged.

Young Mon have been coming under increasing pressure from elders in recent years to marry within the community, said Ma Zu Zin Ei San, a Mon from Thanbyuzayat Township, in Mon State.

She described this as a response to communal conflict between Buddhists and Muslims that erupted in Myanmar between 2012 and 2014.

Since 2013, elders in Mon society have been urging the younger generation to avoid mixed marriages, she added.

She said this was largely confined to Mon State. Ethnic Mon living in Yangon rarely marry within their community, but Mon civil society groups have been increasingly encouraging members of the younger generation to avoid mixed marriages.

Zu Zin Ei San said marrying within the same ethnic group also had the advantage of minimising the possibility of misunderstandings with the extended family.

“Parents have deep concerns about the marriages of their daughters and sons even when they marry in their own community,” she said.

“I think that culture and tradition can only be maintained when two people from the same ethnic group marry, so I agree with the advice of the older generation to avoid mixed marriages.”

Marriages within the same ethnic group also benefit from the inherent trust and understanding between the partners that contributes towards a smoother relationship than might be the case with a mixed marriage. Htu Seng Aung Lasham, a Kachin from Kutkai in northwestern Shan State, said she had married another Kachin to avoid problems over culture and beliefs.

She said many Kachin women married outside their community, either to other Myanmar or to Chinese. But there is a widely held perception among Kachin that these unions do not result in long, happy relationships, and that problems are inevitable in such mixed marriages.

“We are taught by a pastor in the church to marry within the same ethnic group and religion if we want to have a happy family,” she said.

Women were culturally obliged to follow their husbands but this could create problems if they were from different ethnic backgrounds, Htu Seng Aung said, and cited attendance at national day celebrations as an example.

Most Chin marry within their ethnic group, especially members of the same religion, said Ma Nancy Par Tha Chin, 21. She hails from Hakha, the capital of Chin State, where 85 percent of the population is Christian.

She said Chin society believed it was more important for women to preserve their ethnic identity by marrying within the community. This was because men were not at risk of surrendering their identity when they marry.

“For example, we have a song about patriotism and love that says Chin women are only for Chin men,” said Nancy Par Tha Chin said.

“Women are culturally influenced to marry within their own ethnic group,” she said, “but men have more freedom to choose outside their group.” 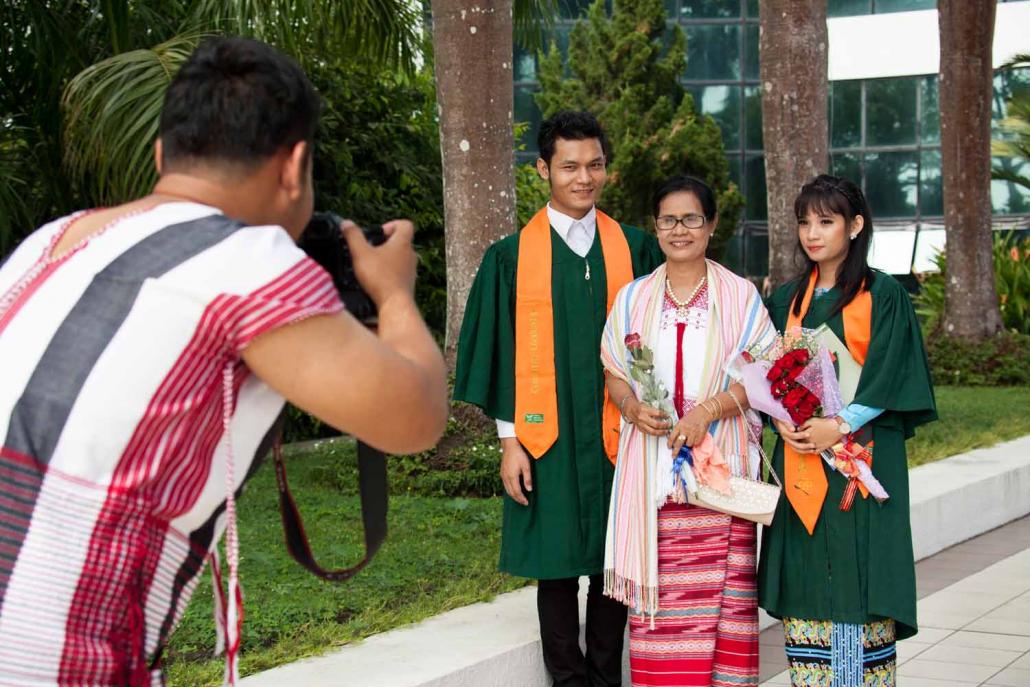 It’s not clear what effect this facet of ethnic nationalism has on relations between different groups.

Naw Aye Aye Hlaing, a program manager at Women Can Do It (WCDI), said that marriages between men and women of different backgrounds posed a range of potential challenges and benefits.

She said that children of these marriages often benefited the most, as they have a chance to experience two cultures. This often gives them a “broad mindset”, she said.

“I think that there’s not that many difficulties for couples of different ethnicities,” she said. “But interfaith marriage is a different story.”

The picture appears at least somewhat different for the majority ethnic group, the Bamar. Several Bamar women told Frontier that their families placed no pressure on them to marry within their ethnic group, but that marriage to non-Buddhists was frowned upon.

Ma Eaint Kyi Phyu, a Buddhist Bamar from Yangon, said her parents had only asked about the religion of her boyfriend, an ethnic Rakhine.

“I don’t have any negative perception about the ethnic minority people,” she said.

She said she believed that the desire among some to marry only within their ethnic group was a legacy of the oppression and racism of the government toward minorities.

“Everything will be okay if all are regarded as human beings regardless of race and religion,” she added.

Similarly, Ma Thu Hnin Aye Kyaw Soe, a Buddhist Bamar from Yangon, said her family would let her marry a member of any ethnic minority.

She added: “But they wouldn’t let me marry someone from another religion.”