LASHIO — The leader of a militia group has been killed in an apparently targeted attack on his house as fighting continues near Lashio in northern Shan State between members of the Northern Alliance and the Tatmadaw.

U Win Maung, 61, the leader of the Mong Yan militia, and his wife, Daw Aye Mya, were killed in an attack on their home at Man Kaung, the main village of the Man Kaung Mong Yan village tract, about 32 kilometres (20 miles) east of Lashio, at about 8.30pm on August 20.

The house was bombarded with grenades and M79 rocket launchers in the attack, which has terrified the 200 residents of the village.

The attack in Lashio Township came three days after the three Northern Alliance members involved in the fighting issued a statement warning that any members of government security forces found in operational areas would be “duly taken care of for the sake of self defence”.

Fighting has intensified across northern Shan State since August 15, when Northern Alliance forces launched simultaneous attacks at five locations along a major highway.

The August 17 statement referred to the Tatmadaw but warned specifically that members of the Myanmar Police Force and uniformed members of paramilitary groups would be regarded as members of ancillary forces on active duty.

It also warned local paramilitary forces against participating in operations with the Tatmadaw and advised them to remain at home with their families.

The bodies of Win Maung and Aye Mya were retrieved from the remains of their two-storey house after the attack by villagers and collected the next day by a Lashio-based emergency response group, the Tai Youth Network. Their bodies reached Lashio General Hospital at 11.20am on August 21.

“We could not collect the bodies after the attack because the Tatmadaw could not provide security for us, so we had to come this morning,” said Sai Han, the group’s leader. 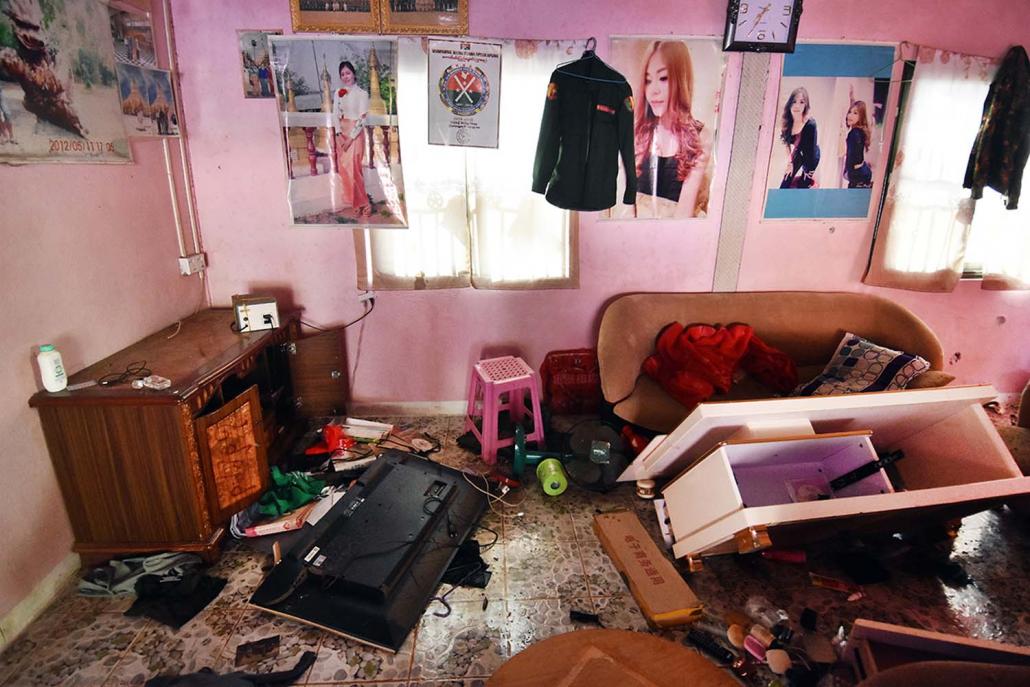 The downstairs room of the house was looted during the attack. (Steve Tickner | Frontier)

The administrator of the village tract, Sai Seng Nyunt, said residents had sought cover when they heard the sound of grenade launchers and automatic weapons as the attack began.

“Though we have two militia groups in the village, they do not have any weapons, so people had to hide until the attack was over,” he told Frontier.

Older village residents said there had been skirmishes around the village tract in the past involving light weapons but it was the first time they could recall grenades and RPGs being used.

Unexploded ordinance – a hand grenade and two M79 grenades – were still at the scene of the attack when Frontier arrived in the village on the morning of August 21.

Although villagers did not say which ethnic armed group had carried out the attack, media outlets have attributed it to one of the three Northern Alliance members involved in recent fighting in the area, the Ta’ang National Liberation Army, the Myanmar National Democratic Alliance Army and the Arakan Army.

The TNLA’s Major Mai Aik Kyaw said he did not know who was responsible for the attack.

He said the only way to end the fighting was through dialogue. “We have made clear that we are acting in self-defence and if the Tatmadaw chooses to respond only with warfare, there will be more fighting,” he said.

Frontier called Brigadier-General Zaw Min Tun from the Tatmadaw’s True News Information Team to ask about the attack on Man Kaung but he did not answer the phone.

The fighting has affected a swathe of territory in northern Shan and parts of neighbouring Mandalay Region and has displaced thousands of villagers, including hundreds of people who have sought refuge at a monastery in Lashio.