Maungdaw: Into the conflict zone

THE SMOKE appears after we pass the Border Guard Post 3-mile checkpoint outside Maungdaw. As we edge closer to downtown, we notice small craters in the road, about 50 centimetres wide, which appear to have been made by some sort of explosive.

Then we arrive at Myo Thu Gyi, or what’s left of it. A row of two-storey shops along the road are still on fire, but behind them, for as far as we can see, the homes have been burned to the ground. Not a single building has been left untouched. The long, thin trunks of the coconut trees stand above the wreckage, their formerly green leaves now a shade of brown. The village is almost completely deserted. There are no Muslims or security forces; just a few Rakhine can be seen walking around the area.

Home to more than 4,000 Muslim households – probably in excess of 20,000 people – Myo Thu Gyi has always been considered a hotspot for conflict and unrest. It’s also a security challenge for the Border Guard Police, as it flanks the main road into Maungdaw.

After previous bouts of violence, such as October 2016, life in Myo Thu Gyi has quickly returned to normal. It’s clear that won’t be possible this time.

Maungdaw was the epicenter of the August 25 attacks by the Arakan Rohingya Salvation Army but in recent days more of the township has returned to government control.  Sources on the ground said fewer gunshots could be heard, and there has been much less arson in recent days.

Some remote villages in the north, at the foot of the Mayu mountains, have not yet been reached by security forces. In these ethnic Rakhine villages, residents and government staff are too afraid to leave the village perimeter.

Rakhine State Chief Minister U Nyi Pu told reporters on August 27 that they knew some Rakhine civilians were trapped and could not be reached by security forces but it was not clear how many. 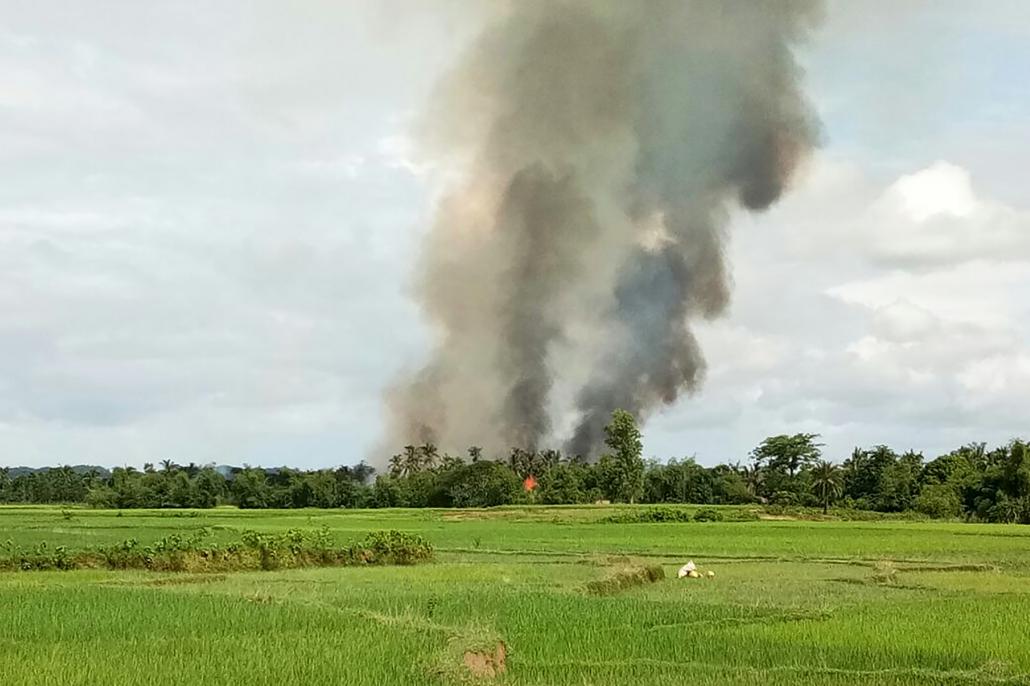 Smoke rises from what is believed to be a burning village in the area near Maungdaw on Wednesday. (AFP)

In the aftermath of the attacks, those who can afford to do so have fled to Buthidaung or Sittwe. Others have been forced to take shelter in downtown Maungdaw, where over 4,000 ethnic Rakhine are living in temporary camps. Muslim residents are fleeing into the forest or to the Bangladesh border; there are no shelters or camps at which they can seek refuge.

Despite a government ban on travelling to Maungdaw, Frontier was able to visit briefly on August 29 with two other journalists to assess the situation first-hand.

Frontier was able to visit Maungdaw briefly on August 29 with two other journalists to assess the situation first-hand, by travelling undercover with a civil society group.

This was necessary because the authorities were trying to prohibit the media from seeing the destruction.

The previous day, Frontier had been with a group of journalists – representing Reuters, AP, Channel NewsAsia, 7Day News, Irrawaddy and DVB – who had been stopped outside Buthidaung at the 6-mile checkpoint, which is the first security check on the road to Maungdaw.

Eventually, an immigration official and the township administrator arrived at the checkpoint and told us to go back to Buthidaung. We refused; after about 30 minutes of negotiation, the district administrator was called. We returned after he confirmed that we would not be allowed to travel to Maungdaw.

The next morning, all reporters were called to General Administration Department office in Buthidaung. Deputy Township Administrator U Hla Shwe warned reporters against travelling to Maungdaw. He read out a statement that he claimed was from the Union government. “All reporters must have legal documents from the Rakhine State government to cover news and stay in Buthidaung and Maungdaw.”

When reporters asked about the statement, U Hla Shwe said that it had recently been issued by the Union government. The next day, however, Frontier discovered that the statement was dated April 6 – nearly five months previous.

At no point were we given a solid reason for not being able to travel to Maungdaw. We had our suspicions, though.

While we waited for officials at the 6-mile checkpoint, we took the opportunity to interview many people who were fleeing in the opposite direction, from villages near Maungdaw. In fleeing Maungdaw, most had taken the road past Myo Thu Gyi. Many of them told Frontier, “Myo Thu Gyi is still burning. We saw that on the way.”

The following day, Human Rights Watch said satellites had detected active fires in eight locations from mid-morning to early afternoon on August 28, including the Myo Thu Gyi area just outside Maungdaw downtown and several other villages in Maungdaw.

Given that villages were burning – and fires were possibly still being lit – when we were attempting to visit Maungdaw, the authorities may have had their reasons for wanting to keep us away.

Donation groups from Yangon and other cities have been sending food, clothes, health assistance and other support to camps set up to house displaced ethnic Rakhine people in Maungdaw.

Muslims from the area – who self-identify as Rohingya but are mostly referred to as Bengalis – have fled into the forests or towards the border with Bangladesh, leaving the smouldering remains of their homes.

The area’s Hindu population has been largely forgotten. Frontier visited one camp in Maungdaw and found residents had no support of any kind, and were short of food. There was also no security and they were fearful of the ARSA.

The Hindus in Maungdaw look similar to the Muslims and speak the same language. Because of this, most Hindus have marked their foreheads with red powder so that outsiders can distinguish them.

Shu Bawn, 32, lived in a Muslim area of Maungdaw’s No 4 Ward. “Rohingya lobbyists used our children in their pictures and said they were Rohingya Muslims, so now we’re even afraid to see ethnic Rakhine ethnic people. Please help us.”

Their security concerns are well founded. Shortly after the violence erupted, six Hindus in a group of 12 were killed near Myo Thu Gyi village while travelling to downtown Maungdaw from Myin Hlut village. One of the survivors blamed ARSA for the deaths.

Since the fighting started, the security forces and ARSA have fought in and around some of the Muslim villages.

Several Muslims told Frontier that ARSA fighters came to their homes at night and threatened to harm them if they did not allow them to stay. Then when the security forces patrol in the area, the ARSA shoot at them from the homes of the civilians. Naturally, the security forces shoot back, but the ARSA disappears easily into the villages.

While security forces have been able to control the downtown Maungdaw area, civilians in the displacement camps said they still hear gunshots at night. “At first we heard the gunfire even during the daytime. But these days, we have just heard it at night,” a Rakhine woman staying at camp in Maungdaw said on August 29.

Not all areas are suffering violence and instability. South of Buthidaung, along the waterway that stretches to Sittwe, there are many Rakhine and Muslim villages coexisting relatively peacefully. Frontier observed residents fishing and farming as normal.

“We are just afraid of strangers,” a Muslim resident of Buthidaung said. “When a [Muslim] stranger comes into the city, when we know that, we are alarmed and inform everyone. Sometimes we inform the police about it.”