An apparent reluctance by speakers in the NLD-dominated Pyidaungsu Hluttaw to allow debate on a range of issues has fuelled accusations that the parliament is failing to act as an effective check and balance on the government.

ON FEBRUARY 1, the Pyidaungsu Hluttaw, Myanmar’s national legislature, celebrated its first anniversary under the domination of the National League for Democracy.

Although the party’s election win in late 2015 was hailed as a landmark step forward for democracy, events of the past year have prompted questions over the party’s attitude towards the role of debate in the legislative pillar.

An examination of the proposals approved by the new Hluttaw before and after the transfer of power on March 30 last year suggests the incoming parliament was more willing to act as a check and balance on the previous Union Solidarity and Development Party administration led by U Thein Sein than on the NLD government.

The new Hluttaw approved four proposals involving the USDP government before the NLD took office, including two from the NLD, one from the USDP and one from the Shan Nationalities League for Democracy.

Between March 30, when the NLD took office, and the end of 2016, the Hluttaw approved only six further proposals: five from the NLD and one from the SNLD.

Between February 1 and December 31 a total of 44 proposals, including 18 deemed “urgent”, were tabled. In addition to the 10 approved, another 24 were recorded – meaning that the government was not compelled to act on them – and 10 were rejected for debate. 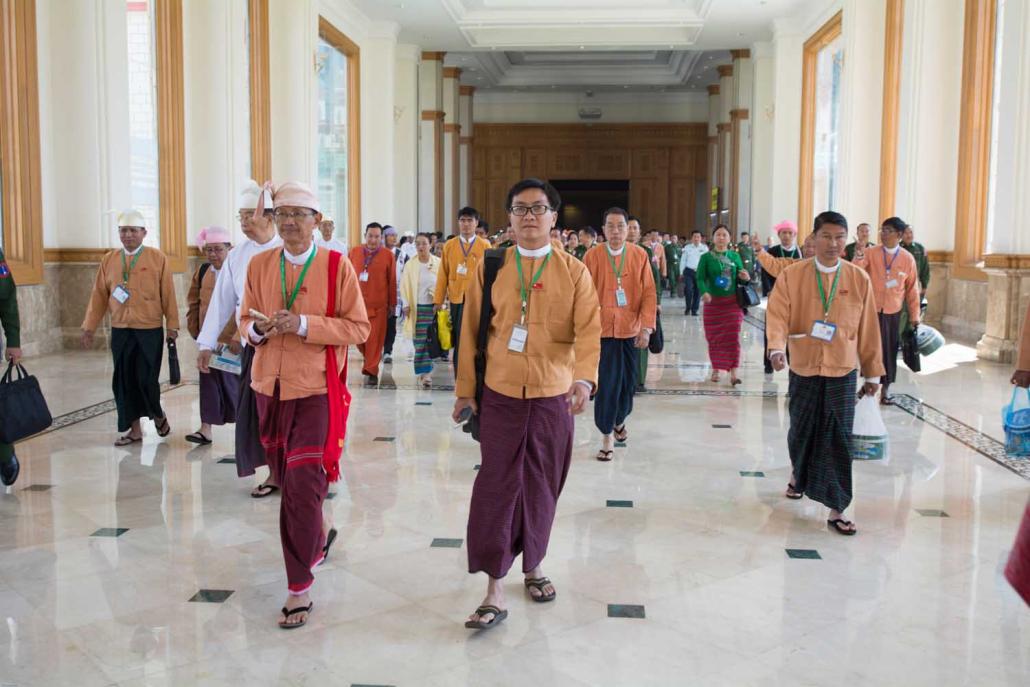 Lawmakers walk through the corridors of parliament in Nay Pyi Taw on January 31, 2016, the day they were sworn into office. (Teza Hlaing | Frontier)

Of the 24 recorded, 18 were submitted by the NLD, three from USDP, two from the ANP and one from the Lisu National Development Party.

The NLD-dominated Hluttaw’s unwillingness to approve proposals has prompted criticism that it has been too lenient in acting as a check and balance on the NLD-dominated executive branch of government.

Pyithu Hluttaw MP U Thein Tun (USDP, Kyaunggon, Ayeyarwady) said it was not surprising that the legislature was not putting more pressure on the executive when both were dominated by the same party.

“There has never been a situation where the government got into trouble because a proposal was approved in the Hluttaw,” he told Frontier.

“In considering proposals, [the speakers] should not discriminate between the political parties,” Thein Tun said.

“Proposals urging action by the government are not intended to create difficulties for the government; there will be no problem even if they are approved. The government has its policies and will act according to its priorities,” he said.

He noted that in the previous Hluttaw, the speakers and lawmakers were more willing to act as a check and balance.

However, he said the U Thein Sein administration often ignored the Hluttaw’s actions and “was never under pressure”.

“During the term of the current government, it seems like the Hluttaw wants to avoid putting the government in a difficult situation.”

Data compiled by the Open Myanmar Initiative, a Yangon-based think-tank that monitors the Hluttaw and issues regular reports on its performance, showed that of 15 proposals tabled by the USDP and the Shan Nationalities League for Democracy, only one by the former and two by the latter were approved.

It is noteworthy that all four proposals submitted for debate by the Arakan National Party, the third biggest in the Union Hluttaw, were unsuccessful, with two rejected and two recorded.

Of the ANP proposals rejected for debate, one was a call for the removal of the former United Nations secretary-general Mr Kofi Annan and the two other foreign members of the Advisory Commission of Rakhine State appointed by State Counsellor Daw Aung San Suu Kyi last August. The other concerned the security situation in Maungdaw District following the October 9 insurgent attacks.

The two other proposals ­– concerning the verification process for the 1982 Citizenship Law, and an invitation to the Arakan Army to join the peace process – were recorded, not approved.

Pyithu Hluttaw Speaker U Win Myint told Frontier in early February that decisions about whether to allow debate on proposals tabled for discussion were “made in accordance with the rules and regulations” of parliamentary procedure.

He said criticism of decisions to reject proposals for debate was being made by disgruntled MPs who “did not get what they wanted”. Decisions about whether to allow debate depended on the proposal, Win Myint said.

At a news conference in December, Win Myint outlined the restrictions that apply to MPs during parliamentary debates.

He said that as well as a ban on using slanderous and defamatory language, they were forbidden to discuss any topic that would damage national security or adversely affect national unity. Issues related to defence, security and state secrets must be only discussed in closed sessions and MPs were banned from seeking debate on matters that had already been discussed or were irrelevant.

Win Myint told the news conference that he was carrying out his duties in line with the rules and regulations of the Hluttaw.

U Tun Tun Hein, the chair of the Pyithu Huttaw Bill Committee and a member of the NLD’s central executive committee, said different opinions were to be expected.

“It’s true that we have challenges – these are jobs that we had never done before. But there are no difficulties that we cannot overcome. For the performances of the Hluttaw, some people will satisfied, but some will not. That is natural.”

Open Myanmar Initiative research director U Htin Kyaw Aye said changes were needed to Hluttaw rules and regulations “to reduce controversy” over the inability of the NLD-dominated parliament to function as a more effective check and balance on the executive.

“It is a common situation,” Htin Kyaw Aye told Frontier in the second week of February. “A similar situation occurred when the USDP dominated the Hluttaw.”

Within a few days after his remark, the Hluttaw agreed on February 10 to discuss a proposal, submitted to the Pyithu Hluttaw by U Tin Htway  (NLD, Waw), urging the Union Supreme Court to take steps to reform the judiciary. It has not yet been debated, but is significant in that it is the first proposal submitted to the current Hluttaw focused on judicial reform.

Pyithu Hluttaw MP Daw Khin Saw Wai (ANP, Rathedaung, Rakhine State) said her party was not deterred by the rejection of its proposals and would continue to table motions in the parliament.

“It is a challenging situation because the speakers are over-anxious about the risk of making a mistake,” Khin Saw Wai told Frontier. “We have to work harder.”

Despite threats from the regime and a lack of secure channels, groups in Myanmar and overseas have lent massive support to striking public servants in the Civil Disobedience Movement.
BY Frontier