Following the appointment of a new Anti-Corruption Commission in November, attention is turning to the need for legal reform to ensure the commission’s independence and protect whistleblowers.

THERE’S A saying that you can go anywhere in Myanmar by bus, plane, train or elephant. Not any ordinary elephant, though – the one found on a pink K5,000 note. The suggestion is that a well-placed bribe can open any door.

Corruption is not new in Myanmar, but this particular expression is; the K5,000 note was only introduced in late 2009. It reflects the fact that, despite reforms since 2011, corruption remains rampant.

Although the commission received more than 4,500 complaint letters from March 2014 to November 2017, only 66 were investigated, while another 1,126 were forwarded to the relevant ministry to be handled internally. The commission’s biggest scalps to date have been mostly low-ranking judicial and government officials. There has been little improvement under the National League for Democracy government.

Asked about the commission’s work and what more needs to be done, former member U Thin Maung was defensive. “I never talk about who and what is good or bad,” he responded.

However, the appointment of new commission members in November 2017 has raised hopes that more effective measures will soon be taken to curb corruption.

Upon taking office, new commission chair U Aung Kyi – a former general and minister in the military and U Thein Sein governments – promised to review the commission’s work and embark on reforms.

From the start he has signaled a change in approach; on December 8, he oversaw a ceremony in Nay Pyi Taw to mark International Anti-Corruption Day for the first time.

In his speech, Aung Kyi said the commission would seek to amend the Anti-Corruption Law, expand its corruption prevention activities and deepen cooperation with the United Nations Office on Drugs and Crime.

Amending the Anti-Corruption Law to bring it into compliance with the UN Convention Against Corruption, which Myanmar ratified in 2012, is considered essential for tackling the problem.

Mr Troels Vester, head of the UNODC office in Myanmar, said he met Aung Kyi twice in the first week of December and agreed to provide further technical support.

Vester described the new commission chief’s plans, which include developing a national strategy on corruption, as “positive and certainly encouraging”.

“[Aung Kyi] proposes to amend the law, ensure compliance with UNCAC, strengthen the investigative capabilities, focus on educating and creating awareness and have a multi-pronged approach to fight corruption,” he said.

“Both agencies agreed that the way forward includes a whole-of-government response and a balanced approach focusing on all aspects of corruption.”

The need for both legal reform and a more strategic approach were highlighted at an Anti-Corruption Day event in Yangon on December 9 that was attended by lawmakers, government officials, lawyers and activists.

Yangon Region Hluttaw member Daw Kyi Pyar (NLD, Kyauktada-1) related how people were saying – possibly in jest – that corruption was worse under the NLD because government processes had become more complicated. “If a process is difficult, people have to pay more money,” she said. “If they want to fight corruption, it’s important that the commission and government address these issues.”

Participants at the Yangon event also discussed the need to amend the Anti-Corruption Law so that the commission can begin an investigation even if it has not received a formal complaint.

They expressed concern about provisions of the law that hamper the commission’s independence from the government, particularly the requirement that it “report to” the president and speakers of the Pyithu and Amyotha Hluttaws, including by submitting the results of corruption investigations.

“During this reporting period, the suspect can run away,” she said. “I think we need to permit that mandate for penalty decision to the commission chairperson.”

Another much-needed change to the law is the lack of protections for whistleblowers, she said.

In 2016, UNODC examined the current law was examined as part of a review of implementation of UNCAC in Myanmar.

The review identified a number of priorities for legal reform, including clarifying the definition of bribery to include paying a bribe, penalizing corruption in the private sector and ensuring protection of whistleblowers and witnesses.

“[T]his last point is quite critical if we want to make sure that citizens come forward with information on potential corruption cases,” Vester said.

The previous Anti-Corruption Commission drafted an amendment bill, although these changes have not yet been released publicly.

Lawmakers on the parliament’s Public Affairs Management Committee will soon begin reviewing the draft, which is likely to be submitted for approval in the first half of the year, said committee member and Pyithu Hluttaw MP Daw Pyone (NLD, Indaw).

“We’ll review the law in first three months of 2018,” she said. “We are considering expanding the mandate of the chairperson [of the commission] to ensure independence from those who appointed the commissioners. The second change is to ensure the commission does not need a formal complaint to begin an investigation.”

Empowering the commission is one institutional approach to tackling corruption, but there are other approaches that need to be pursued concurrently.

The commission’s work focuses mostly on investigation and prosecuting corrupt government officials, but advocate U Aung Soe pointed out that it was important to change the behaviour of the people who are paying the bribes.

“We need to be clear from corruption; we need to start with ourselves,” said Aung Soe, who is a member of Rule of Law and Equal Justice, a Yangon-based civil society group focused on corruption.

U Myat Ko, director of the Yangon School of Political Science, said overhauling existing rules, regulations and laws could make a major difference.

He said that, in order to be effective, policies aimed at curbing corruption need to be based on research and evidence.

“Most of the laws enacted since 2011 have weaknesses,” he said. “For example, the Anti-Corruption Law has contradictory clauses.” 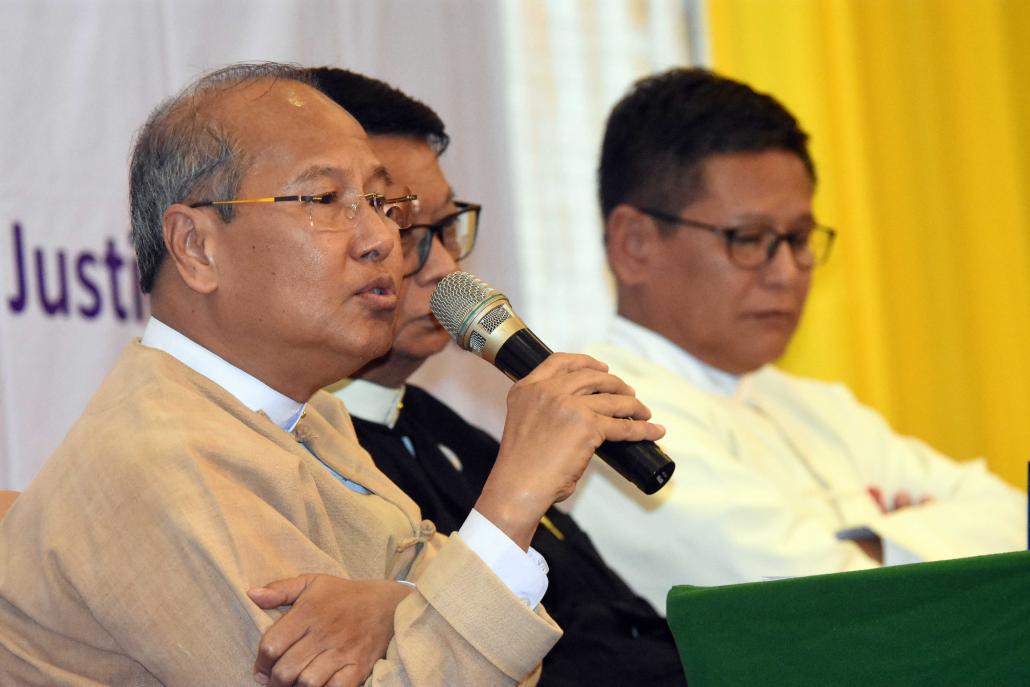 At the Anti-Corruption Day event in Yangon, Magway Chief Minister U Aung Moe Nyo (National League for Democracy, Pwintbyu-1) highlighted how approaches other than prosecution can yield results.

He related how income from a tollgate in Gangaw Township had been around K7.6 million a year when he took office. Through closer scrutiny and better accounting, income had risen five-fold, to K45 million a year. Meanwhile, municipal tax income in Magway has increased by K1.7 billion a year through similar measures, he said.

Aung Moe Nyo said that these measures should be coupled with improved benefits for government staff, such as increased salaries and better housing.

Despite some of these successes, there is a consensus that the NLD needs to do much more to curb corruption.

“I’m not satisfied with the NLD’s anti-corruption efforts so far,” said advocate U Mya Thwin. “To be successful, they will have to forget about the threats they might face from corrupt officials.”