Passion and enthusiasm drive a Kachin violinist who achieved his dream of establishing a youth string orchestra from scratch.

WHEN LAMAI Lawt Aung decided in 2013 that he wanted to form a string orchestra at a Baptist church in the Kachin State capital Myitkyina, he harboured doubts about his chances. Despite lacking funds, instruments and musicians, he persevered, and the Shatapru Kachin Baptist Church now hosts a sixteen-member youth string orchestra that he trained from scratch.

Most Kachin are Christian, and like many Kachin, 28-year-old Lawt Aung’s musical experience is tied closely to the church. He was seven when he heard a violin for the first time during a church service at Hopin, his hometown about 130 kilometres southwest of Myitkyina. “I thought to myself, ‘This little instrument is very mellow and very beautiful,’” he recalled.

At 12 he began taking lessons from a teacher he met through church and during high school he travelled to Myitkyina during the summer for further lessons, also through the church. After passing 10th standard he decided – despite his family’s apprehensions – to commit himself to music and joined an orchestra as part of his music studies at Myitkyina’s Kachin Theological College and Seminary, where the seed was planted for him to create his own orchestra.

When he suggested the idea a few years later to leaders of the church he attended in the city’s Shatapru Quarter they were sceptical but relented after an audition with a small group of students. One reverend helped him order a cello from Yangon, which Lawt Aung taught himself to play using YouTube, before moving on to a viola. His small group of trainees was determined to succeed. “When we started, we did not have good technique or good sound,” Lawt Aung said. “When we played Beethoven’s symphony, most of the students had never played a key change. It was a crazy thing, but we made it. Step by step, we found a way to make a beautiful orchestra,” he said.

Mr Gabriel Lee, founder and director of the Music Society of Myanmar, says some of the first classical music reached Kachin State through Western missionaries in the late nineteenth century. Following the military coup in 1962, music and other expressive arts perceived to be foreign were largely supressed; Myanmar’s political and economic transformation over the past decade has enabled the church to regain its place as an incubator and a resource for music in Kachin society. The Kachin Theological College and Seminary offers one of the leading training institutions for classical music in Myanmar.

“For Kachin, our society is based on church,” Lawt Aung said. “Every Sunday, during worship, when we sing, when we pray to God, it’s music. So, I choose to play music through my church.” As well as providing a venue for performances, the church community also supports Lawt Aung’s orchestra with funding support for travel and to buy instruments.

Lawt Aung has a playful and nurturing manner at daily lessons with the members of his orchestra, who range in age from 11 and 21. All of them learned under his tutelage. 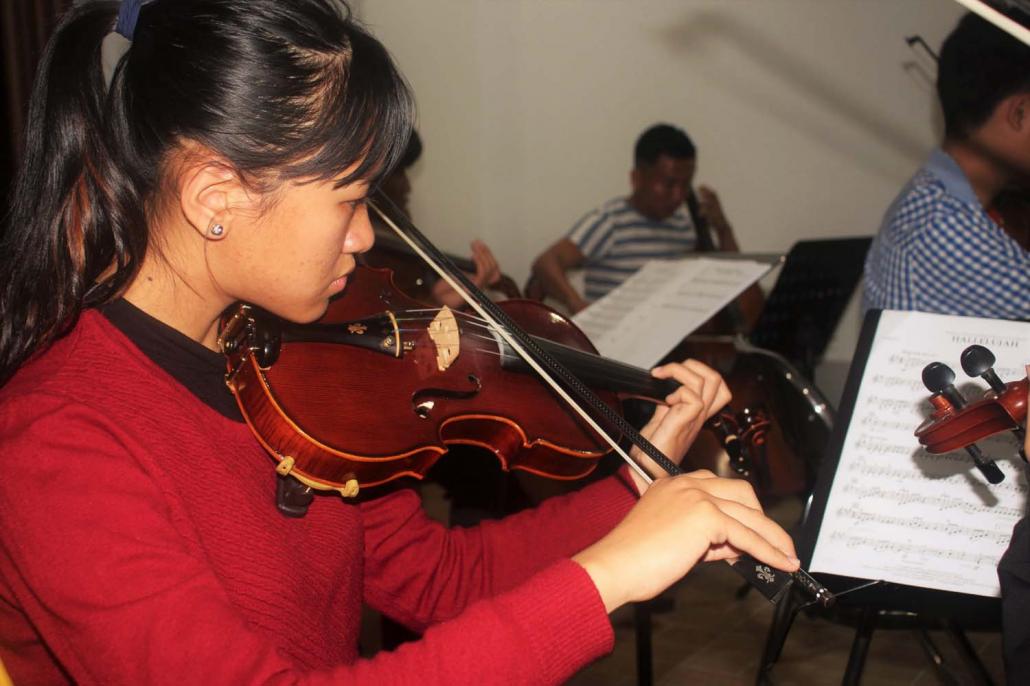 “Sometimes, a musician is like a gardener,” he told Frontier. “When you take care of your seeds, they bloom and they are happy. When my students have the correct pitch and tempo, I have tears in my eyes, I am so happy. Like a gardener. Nothing is like this feeling.”

He is constantly inspired by the hope he sees in his students and the music they create. “I honestly admit, the happiest and most honourable place is in front of [my orchestra]. It is the right place and the right choice in my life,” he said.

As well as daily orchestra practice, Lawt Aung teaches groups for an average of six hours a day at his home and at the Kachin Theological College and Seminary. If he can, he also practises solo up to four hours a day. “My only passion is to play the violin,” he said. “I want to travel the world and get lessons from famous players. I want to see a real Stradivarius before I die.”

The orchestra’s members include Doi Nan, 21, who plays the violin. “When I am bored or lonely, I always have a friend – my violin. Playing makes me happy and relaxed,” she said.

Lawt Aung said many parents enroll their children, especially boys, in music lessons to give them a constructive activity and keep them away from the drugs that have blighted Kachin for decades.

He believes that music helps his students to deal with life’s challenges. “Music gives us a special imagination to think deeply and in detail. I teach my students to work through their problems through music. Music helps them learn about their physical and mental nature, and the nature of other beings.”

Lawt Aung also regards music as a unifier and equaliser. “I teach my students how to make the same tonal quality, the same arm power, as other musicians. Similarly, all people are unified by the struggles we face in our daily lives and how we work to overcome them.”

Lawt Aung’s orchestra provides accompaniment to church hymns during Sunday services, as well as a repertoire of classical songs written by international and Kachin composers. They have performed at a camp for people displaced by the conflict in northern Myanmar, and recently put on a show at a Kachin Baptist church in Chiang Mai. He dreams of creating a full symphony orchestra and is learning about woodwind instruments. “It is very difficult, but step by step we will extend. Sometimes I am busy like a bee,” he said.

In a society facing many problems, including civil war, poverty and a weak education system, Lawt Aung seeks to bring hope to those he trains and those who listen to his orchestra. “At this time in Kachin State, people are working on the margins,” he said. “Families are thinking about how to eat, how to educate their children. Through music, we can feel other people’s troubles. When they cry, we can cry. When they laugh, we can laugh. Music is based on love and emotion. It can give imagination, inspiration and peace. Everyone cries, laughs, dreams listening to music. In life, you will find lots of limitations, but music has no limits.”