Reform of the 2014 Special Economic Zone Law is essential to ensure that land acquisitions for the projects do not violate the human rights of farmers and others who are affected.

ABOUT 20,000 residents of Kyaukphyu Township in Rakhine State are at risk of losing their land and livelihoods because of land acquisition for developing a Special Economic Zone.

Research by the International Commission of Jurists shows this land acquisition does not comply with Myanmar’s land laws. Nor does the process comply with international standards on involuntary resettlement, which are recognised in national law.

The land acquisition for the Kyaukphyu SEZ therefore risks repeating the human rights violations associated with the development of the Dawei and Thilawa SEZs.

In our new report, Special Economic Zones in Myanmar and the State Duty to Protect Human Rights, the ICJ shows how the Kyaukphyu project illustrates broader problems with the design and implementation of laws governing the development of SEZs in Myanmar.

Based on expert legal analysis and interviews with more than 100 stakeholders, including those in the government and private sector, the research found that the 2014 SEZ Law does not conform to Myanmar’s international law obligations to protect human rights.

The ICJ has called for a suspension of land acquisition at Kyaukphyu and for a halt to further work in SEZs until the 2014 law has been amended in order to protect human rights and enable investment in line with the government’s commitments to sustainable development.

Established by the SEZ Law, the legal framework for Myanmar’s SEZs incorporates national laws including those governing land and the environment. Legal procedures for land acquisition, environmental impact assessments and involuntary resettlement all fully apply in the zones.

For example, a developer may obtain an SEZ permit only after approval from the Ministry of Natural Resources and Environmental Conservation, in accordance with environmental conservation laws.

Land acquisition must be carried out in compliance with legal procedures, including those prescribed in the 1894 Land Acquisition Act. The 2015 Environmental Impact Assessment Procedure also requires that development projects conform to international standards on involuntary resettlement. This means land acquisition should occur only after the completion of resettlement planning for residents facing displacement. 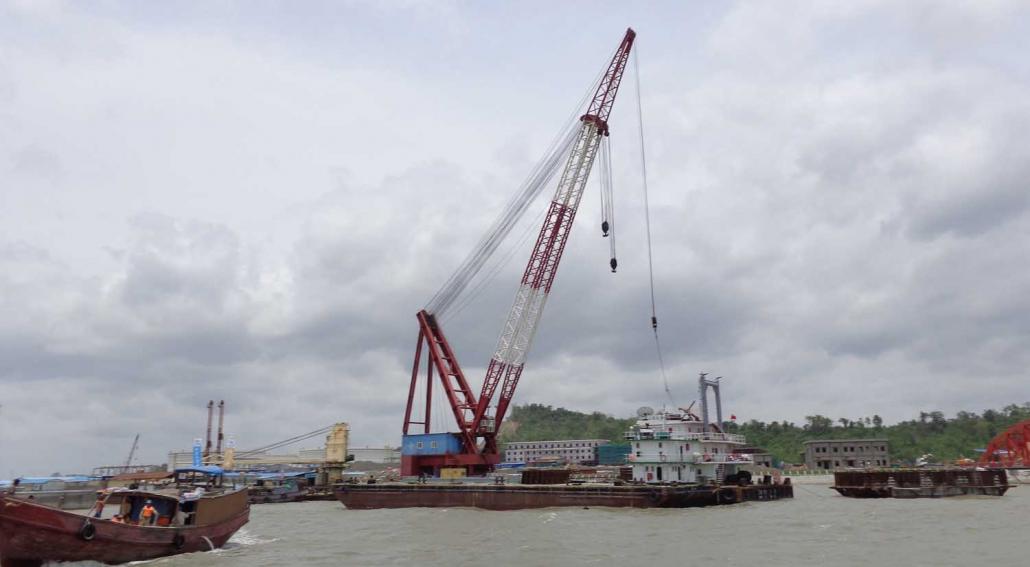 A general view of the deepsea port on Maday Island, near the Kyaukphyu Special Economic Zone in Rakhine State. (EPA)

Other government actors also play critical roles: the Ministry of Home Affairs carries out land acquisition while the Ministry of Natural Resources and Environmental Conservation oversees the EIA procedure.

Although SEZ bodies, particularly the site-specific management committees, exercise significant authority to direct development, the SEZ Law does not establish clear responsibilities for the coordination of land acquisition and EIAs. Nor does the SEZ Law establish responsibilities for the protection of human rights or provide for accountability for adverse human rights impacts.

In practice, critical legal procedures tend to be ignored in Myanmar’s SEZs or if applied they are not coordinated or properly followed.

At Kyaukphyu, the ICJ found that authorities have not complied with key provisions of the Land Acquisition Act. The ICJ is unaware of any resettlement planning conducted in line with international standards. An EIA has not yet been started.

Yet plans for land acquisition appear to be well advanced for the initial Phase 1 development area, covering 250 acres (101ha). Land acquisition in this instance would be unlawful under national laws and constitute forced eviction, a violation of human rights and illegal under international law.

The rights of local residents can be legally protected in SEZs by aligning the SEZ Law with the state’s international human rights law obligations. Amendments are required to establish specific duties and accountabilities for the SEZ bodies to protect human rights, and to clarify differentiated responsibilities for coordinating and carrying out involuntary resettlement. Clear lines of accountability will be critical to guide and direct government bodies and departments, as well as companies, to follow the law.

Legal reform is a necessary and practical way for the National League for Democracy-led government to uphold its commitments to human rights, sustainable development and the rule of law in SEZs.

The recently promulgated Myanmar Investment Law, governing investment outside the zones, provides a highly relevant and realistic example for reform of the SEZ Law. While imperfect, the drafting process included public consultations with civil society and business groups. Consultations resulted in a much-improved law that better protects Myanmar’s people and provides greater certainty for investors.

The government can break from the past by ensuring that economic development projects benefit Myanmar’s people, rather than rushing to facilitate projects that result in human rights violations and ultimately undermine sustainable development.

Further development of SEZs, and related investment agreements, should wait until legislative arrangements are in place to facilitate the full protection of human rights in the zones.