Women and children comprise more than half of the 100,000 people displaced by conflict in Kachin and northern Shan states who endure a precarious existence in camps where many have been living since 2011.

AS A FEEBLE sun pierced the thick early morning fog in Waingmaw Township, the inhabitants of one of the biggest IDP camps in Kachin State began preparing for another day.

There are 2,583 people living in the camp at Maina run by the Kachin Baptist Convention, one of four in the area housing a total of 6,104 IDPs. They are among 89,267 IDPs living in 146 camps throughout Kachin, most of which are in or near the state capital, Myitkyina, or neighbouring Waingmaw Township, show figures released by the United Nations Office for the Coordination of Humanitarian Affairs in September.

Another 9,408 victims of civil conflict live in 33 camps in neighbouring northern Shan State.

More than half of the IDPs are women and many of them struggle to support their families because their husbands are either absent or too ill to work.

She is from Namsan Yang village in Waingmaw Township and has lived in the Maina KBC camp with her family since 2011, when fighting resumed between the Tatmadaw and the Kachin Independence Army, ending a ceasefire agreed in 1994.

Htu Mai and her husband, who cannot work because he has lung disease, have a daughter who grew up in the camp but has since married, and three sons. 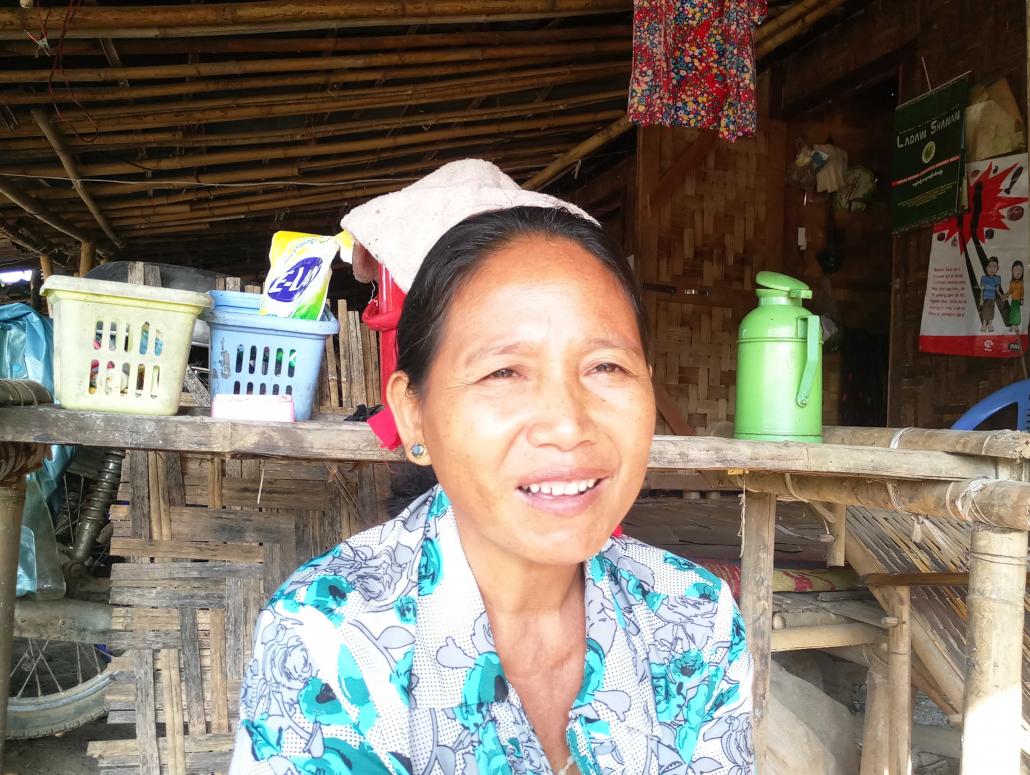 Htu Mai supports the family and covers the cost of educating her three sons by doing casual labour, such as washing clothes. She also makes clothes on a sewing machine provided to a women’s group by a UN agency and raises pigs as another source of income.

“I breed pigs to help cover the cost of educating my sons,” she told Frontier, adding that her earnings total K5,000 a day.

Htu Mai said she preferred working at home as a seamstress because it was more comfortable than doing casual labour.

As well as educating her three sons, Htu Mai has to cover the cost of medical treatment for her husband, which she said was about K30,000 a month.

One of her sons is repeating his final year of high school and hopes to gain admission to university.

“My son told me that he is trying hard and believes he will pass this year, so I will support him as much as I can,” she said.

Life was much easier for Htu Mai and her family before they fled Nansan Yang.

They earned income from renting homes and farmland, and also hired out agricultural equipment, such as tractors.

“I didn’t have to worry about making a living then,” she said.

After the ceasefire collapsed in 2011 there was fighting in Nansan Yang. Because the family home was made from concrete, the KIA used it as a base.

After the Tatmadaw seized the village it found evidence the KIA had used the house as cover during the fighting and burned it down, Htu Mai said, adding that she “lost everything”.

“I am getting old and I don’t think I will ever be able to rebuild the house and an adjoining shop and it makes me very sad,” she said, tears welling in her eyes. “Just talking about it makes we want to cry.”

Daw Nang Pu, founder of the Kachin State Women’s Network and director of the Htoi Gender and Development Foundation, said IDP camp residents had no hope of returning home because the Tatmadaw and KIA remain in active conflict.

The KIA has not signed the Nationwide Ceasefire Agreement, the accord signed by eight armed ethnic groups and the government in October 2015.

Women and children had been most affected by the fighting. The scaling back of humanitarian aid to many IDP camps had particularly serious consequences for pregnant women, she told Frontier.

She said that IDP camp residents were previously given rice, oil, salt and beans but in 2016 began receiving cash transfers instead, and were finding it more difficult to get by. 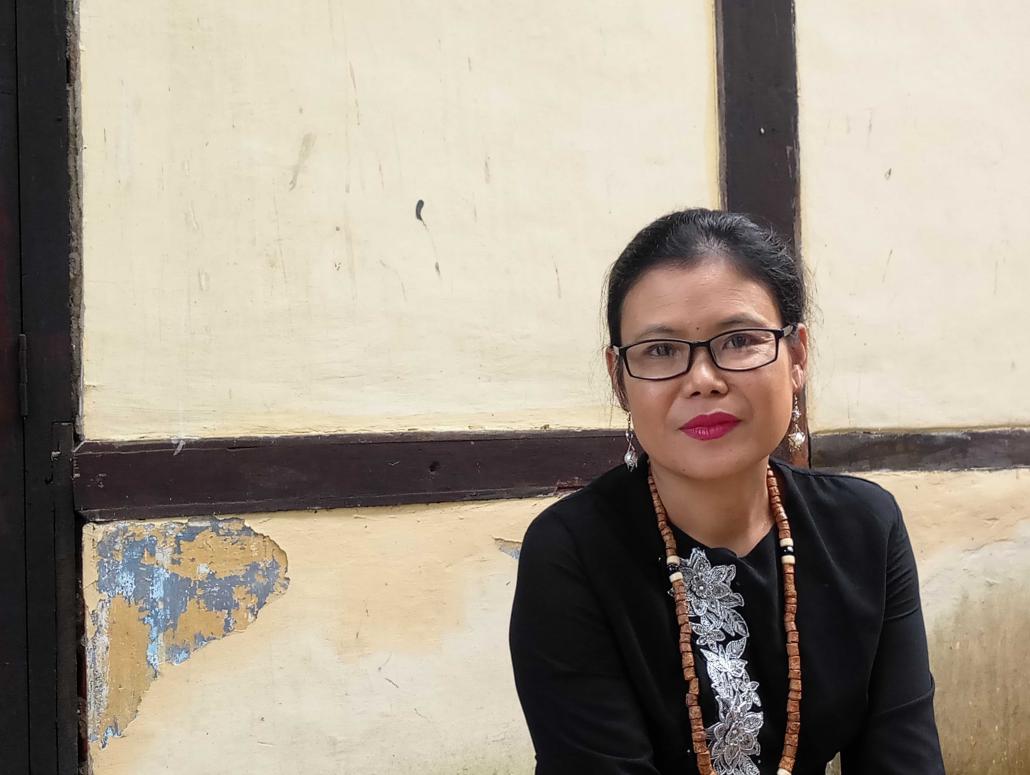 Nang Pu said she had many distressing encounters with pregnant women fearful of the consequences of inadequate nutrition.

“They are often crying when they talk to me,” she said. “The problems of Kachin IDPs are endless.”

Frontier spoke to many people in Kachin who said that if that more women were involved in the peace process, the plight of women in the IDP camps would improve.

The paucity of women in the peace process was highlighted when State Counsellor Daw Aung San Suu Kyi travelled to Kachin State in March. Nang Pu was the only other woman present at a meeting in Myitkyina with the leaders of civil society and Christian groups.

During the meeting, Nang Pu said Aung San Suu Kyi repeated the government’s accusation that IDPs were using the aid they received to support the KIA.

“I wanted to respond that the IDPs are not supporting the KIA – the KIA is even providing aid to the IDPs, too,” Nang Pu said, adding that she had very little time to talk to the state counsellor.

Reverend Hkalam Samson, the secretary of the KBC, said Aung San Suu Kyi had commented on only one other woman being at the meeting.

“She mentioned it at the start of the meeting and we lost face,” he recalled.

As well as the peace process, the meeting also included discussion of the plight of the IDPs, their need for more support and the blocking of humanitarian aid.

“But nothing has happened,” said Hkalam Samson.

He expressed dissatisfaction about the slow pace of the peace process, because IDPs would not be able to return home while negotiations continued.

Hkalam Samson said he no longer felt comfortable about visiting IDP camps because of the number of people asking when they could go home.

The KBC has surveyed 22 villages in Kachin that are regarded as safe for IDPs to return but they can accommodate only about 20,000 of the 98,675 in camps in the state and in northern Shan.

Of the 37 principles agreed at the Panglong 21st Century-Union Peace Conference in May for inclusion in a future peace agreement, two relate to the plight of IDPs.

One calls for refugees and IDPs who are the victims of armed conflict, or man-made or natural disasters, to be able to return to their places of origin, or settle in other places, in dignity and safety.

The other calls for defending the basic rights of the aged, handicapped, women and children without discrimination, and to work for the development of their lives.

The experiences, hopes and priorities of women displaced by conflict in Kachin are highlighted in Life on hold, a report released in June that was commissioned by the INGOs Oxfam and Trocaire and funded by the European Union.

The report said many women IDPs were overwhelmed at having to take sole responsibility for their families.

Many women said they had lost hope for their lives and the future, it said. However, many enjoyed the security of the camps and access to food aid, if it was available, and some highly appreciated the opportunity of participating in training provided by NGOs.

The report makes 16 recommendations about women IDPs and the peace process, which it says needs to be more inclusive and gender-just.

They include supporting income-generating activities for women, establishing comprehensive services for survivors of sexual and gender-based violence, and creating information programs on the peace process that target women.

On the peace process, the recommendations include enhancing cooperation with government stakeholders for establishing effective women’s support services, and including sexual and gender-based violence and gender equality in the negotiations and in the political dialogue.