The campaign launched in response to the alleged sexual assault of a young girl in the national capital has focused attention on a sharp increase in reported child rape cases.

A FACEBOOK campaign demanding justice in response to the alleged sexual assault of a two-year-old girl at a nursery school in Nay Pyi Taw in May began to go viral in June. It was spurred by mass revulsion and soul-searching over an increase in the number of reported child rape cases nationwide, which many think have reached crisis level.

Social media users across Myanmar, and in diaspora communities abroad, changed their Facebook profile pictures to an image with a silhouette of a toddler and the words in English, “Justice for Victoria”, a pseudonym given to the girl. In early July, online outrage spilled over onto the streets.

An estimated 6,000 protesters gathered at the Criminal Investigation Department office in Yangon’s northern Insein Township on July 6 to demand speedy and transparent justice for the girl. She was aged two years and 11 months at the time of the alleged assault on May 16 at the private Wisdom Hill kindergarten in the capital’s Zabuthiri Township.

At the protest, many demonstrators wore white t-shirts with the slogan “Justice for Victoria” in English and some held banners that read in Burmese, “We don’t want any more Victorias”.

The Yangon protest and smaller companion protests in Nay Pyi Taw, Mandalay and Pyay were held after the main suspect in the case, Ko Aung Kyaw Myo, aka Aung Gyi, 29, who has been identified by police as a driver for the school’s supervisor, Daw Ohmar, was rearrested on July 3.

The next day at a district court in Nay Pyi Taw he was charged with rape under section 375 of the Penal Code, for which the maximum penalty is 20 years’ imprisonment. Aung Kyaw Myo was first arrested in June but was released because the CID was unable to produce enough evidence to implicate him in the case. The first court hearing was held at Dekkhina District Court in Nay Pyi Taw on Monday.

On Facebook, speculation is rife that Aung Kyaw Myo is a scapegoat and the real culprit is being protected.

At a news conference broadcast live on Facebook on July 5, Myanmar’s deputy police chief, Police Major-General Aung Naing Thu, defended the police against mounting criticism that the investigation was too slow and revealed that the suspect’s re-arrest had followed an examination of CCTV footage from the school.

The campaign to seek justice for “Victoria” was launched after an account of the alleged rape was posted by Facebook user Poe Phyu, a parent of a child at the school, on May 31 and spread widely across the social media platform in the weeks afterwards.

On June 1, board members of Wisdom Hill nursery school held a press conference in Nay Pyi Taw and invited parents of children at the school. There, chairman of the board U Than Sein confirmed that the child had been assaulted but said it did not happen at the school. He said police had barred the school from sharing further information.

“What was posted on Facebook is not true, and many other allegations are not true. Police who are handling the case will know the most,” Than Sein told reporters after the press conference.

Police in the capital confirmed on June 3 that the investigation had been transferred that day to the CID, and that the victim’s mother had filed a complaint on May 17. 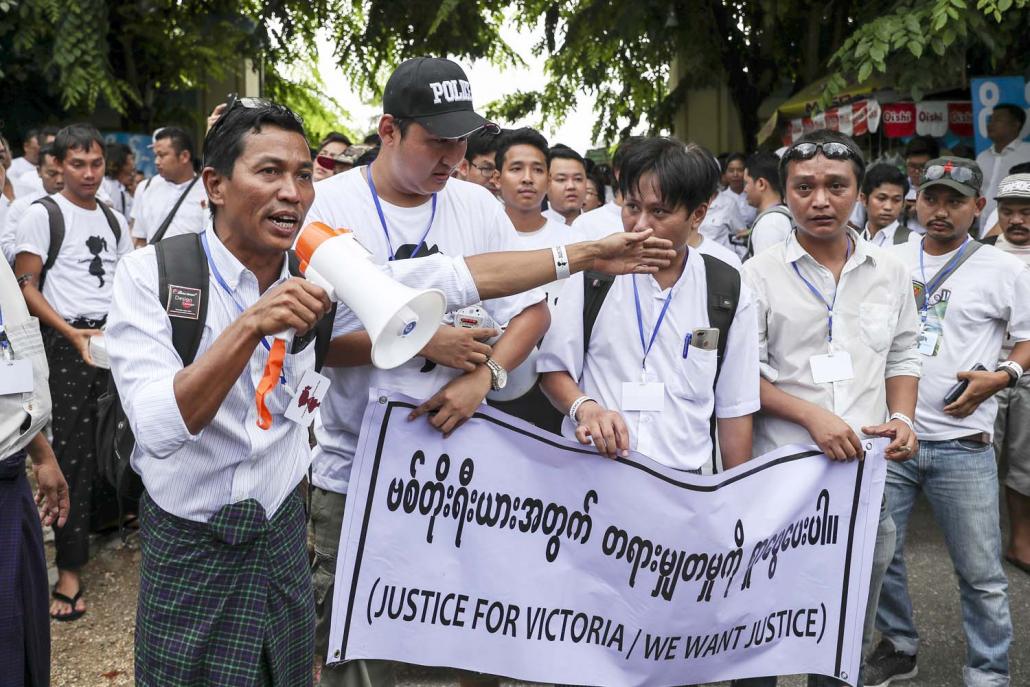 The Justice for Victoria movement is headed by Dr Win Ko Ko Thein, known on Facebook as Thaka Moe Nyo, who lives in Nay Pyi Taw and is a deputy director at the Ministry of Health and Sports. He told Frontier on June 5 that supporters were discussing legal and financial support for the victim’s family.

Win Ko Ko Thein launched the social media campaign with an official Facebook page on June 17 and it quickly gained momentum, with social media influencers and celebrities joining. The “Justice for Victoria” message has since broadened into a wider call for an end to all sexual violence, especially against children.

In a response to the protests, government spokesperson and director-general of the State Counsellor’s Office U Zaw Htay acknowledged, on his personal Facebook account on June 30, that both the President’s and State Counsellor’s offices had been receiving messages from the public about the case.

The Ministry of Home Affairs and the Myanmar Police Force had been instructed to expedite their investigation, he said.

Zaw Htay added that private schools have a responsibility to protect the safety of children under their care and had been advised by the Ministry of Education about the rules they must heed.

“We know well how the public feels about this case and we also hope that the truth will emerge when the investigation is concluded,” he said.

Minister of Social Welfare, Relief and Resettlement Dr Win Myat Aye said his ministry was ready to do what it could. He revealed that private nurseries were only permitted to enrol children aged between three and five, and suggested that the rules may have been flouted at Wisdom Hill because the victim was aged under three.

On July 9, Win Ko Ko Thein was arrested and charged at Pyinmana police station in Nay Pyi Taw Union territory under section 34(d) of the Electronic Transactions Law for allegedly defaming police in a series of Facebook posts he had written between July 4 and 6 that cast doubt on the police’s statements and suggested that Aung Kyaw Myo had been re-arrested largely to placate public anger. He was bailed on the same day.

On July 1, the Justice for Victoria campaign opened an account with AYA Bank to solicit public donations to support the family of the alleged victim.

About three hours later it had reopened. That evening, AYA Bank said in a statement that it had temporarily suspended the account on the orders of the Anti-Money Laundering Central Board, which is part of the Financial Intelligence Unit, run by the Ministry of Home Affairs.

The statement said the bank had subsequently found that the account did not violate its policies, and apologised to the account’s owner, Win Ko Ko Thein. 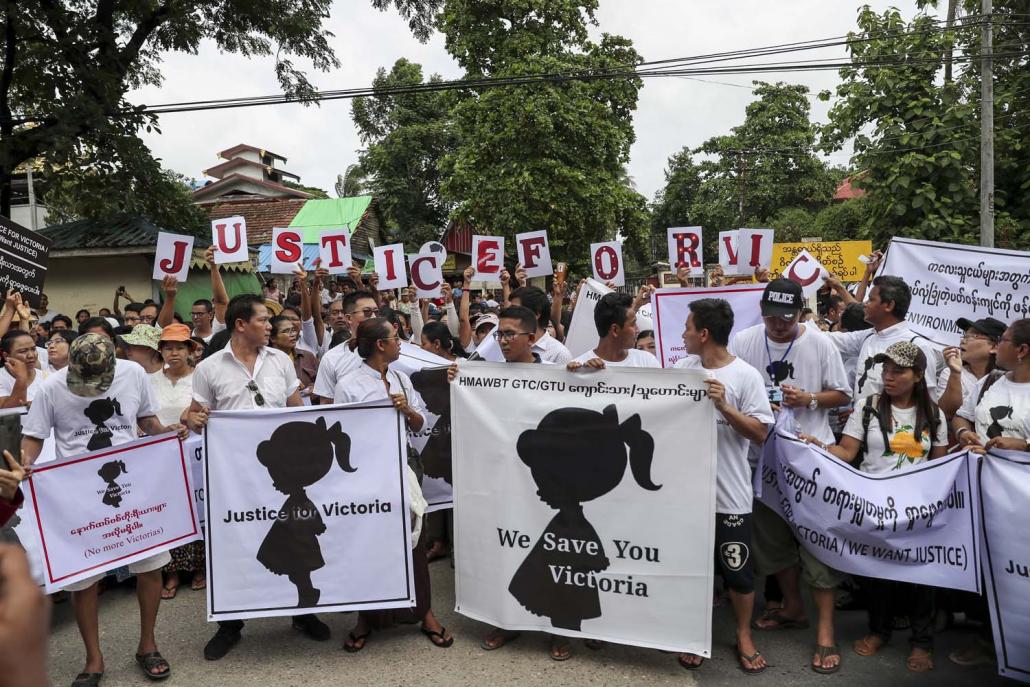 Despite a traditional reluctance in Myanmar to report sexual offences, including those involving children, official figures for rape have been on the rise for years.

The number of reported cases may be rising because of an increased awareness about the sexual abuse of children in Myanmar, with posts on the subject shared widely on Facebook, said jurist U Thein Nyunt. He was previously a member of the Pyithu Hluttaw (National Democratic Force, Thingangyun), where he called three times in 2013 for the death penalty for anyone convicted of raping children, but failed to get any new legislation passed.

More recently in parliament, lawmakers have responded to episodes of public anger by also calling for the death penalty. However, in February 2017, the Pyithu Hluttaw voted not to discuss a proposal by the Arakan National Party to impose the death penalty on those convicted of child rape. The punishments outlined for rape under section 376 of the Penal Code do not include a specific penalty for the rape of a minor. While some criminal offences in Myanmar do entail death sentences, no one has been executed for more than 30 years.

A chapter in the draft Child Rights Law submitted to parliament in 2017 provides for the sexual abuse of children to be punished by a jail term of up to 20 years, regarded as a life sentence, as well as a fine. The draft also defines a child as being aged under 18, bringing Myanmar into line with the 1989 UN Convention on the Rights of the Child. Myanmar’s 1992 Child Law defines a child as someone aged below 16.

Lawyer U Kyaw Nyein said to Frontier that special courts should be set up to hear child rape cases through an expedited process.

Delays in police investigations can give suspects time to escape. In Dala, for example, a poor, semi-rural township across the river from downtown Yangon, a girl aged 15 told police on May 23 she had been sexually abused seven times in four months by a man and had become pregnant. The man had warned her to keep quiet and tried to force her to terminate the pregnancy, she said.

Dala Township police only accepted the case a week later, because they said they needed to probe the allegations, her aunt told Frontier on June 29. The suspect, a 56-year-old neighbour, who had already been called to the police station, fled his home when police began formally investigating.

Public education can also play a crucial role in preventing the sexual abuse of children and more needs to be done to encourage children to report assault, lawyer Kyaw Nyein said.

“Rape cases and the sexual abuse of children and young people are happening because they have little sex education; molesters know that children are not aware of the parts of the bodies that others are not supposed to touch,” Phyo Thiha claimed.

One initiative addressing the issue is the Myanmar Parenting Group, which was formed on Facebook this year and has more than 30,000 members. It launched its “Sex education for our kids” campaign at a workshop in Yangon on July 6.

“We made the movement for the safety of our kids because we are well aware of the need to prevent child sexual abuse,” said Daw Khin San Aye, a member of the group.