Life is hard for freelance miners in Hpakant, where the precious gem coveted in China generates billions of dollars in blackmarket revenue from which neither the people of Kachin State nor the government receive little benefit.

The road from Myitkyina to Hpakant in Kachin State is one of the worst I have travelled. After enduring nine hours on this bumpy mountain track, with frequent stops at military checkpoints, I entered the heart of Myanmar’s jade country.

Hpakant is known as “the land of jade” for its high-quality stone, long prized in China because of its beauty and symbolism.

“Gold is valuable, but jade is priceless,” says an old Chinese saying.

In the past, the hard manual labour of mining the precious gem mainly involved the Kachin people. Today the region attracts hundreds of thousands of men from throughout the country who share one dream – finding a piece of jade that will bring instant wealth.

In Hpakant, there are hundreds of officially licensed companies of various sizes devouring the mountainsides with backhoes, earthmovers and trucks. They began working round-the-clock after a ceasefire was signed between the Kachin Independence Army and the Tatmadaw in 1994. The ceasefire brought the town back under the control of the government, which has a share of the profit from jade.

At the bottom end of the business are the illegal freelance miners who fossick through the tailings dumped by big companies in the hope of striking it rich. Middlemen buy stones from the freelancers, which they sell on the black market in so-called ‘jade tea shops’ and are usually smuggled across the border into China.

One evening, I saw dozens of miners lining up to by the drug. “Without this I am very tired, but after the shot I feel happy to work again and can chase my dreams,” a miner told me.

When fighting resumed between the KIA and Tatmadaw in June 2011, the companies moved out and the freelancers moved in. The companies have since returned.

The freelance miners work in dangerous conditions. Landslides are common. In April, a landslide at a mine operated by the Myat Yamon jade mining company killed between 30 and 60 people. Hpakant residents blamed the tragedy on the irresponsible dumping of mine tailings.

Another risk for the freelancers is arrest. One morning I saw some miners in a lake. I thought they were having fun but it was no recreational dip. They were trying to escape from a pursuing group of policemen and Tatmadaw personnel. The police and soldiers stood at the lake’s shore and an angry crowd formed behind them. The miners refused to come ashore and waited in the lake, floating on improvised buoyancy aids – buckets – thrown to them by family members and friends. Eventually the police and soldiers gave up waiting and left.

This happens every few weeks, the freelance miners said. The unlucky ones are arrested and then released after paying a small fine.

“They arrest us, local people who are working in our own land, but they let the Chinese steal away the precious wealth from our country,” complained one miner.

The search for jade never stops. Some miners work during the day and others at night. Some are earning money to support their families and others are working to support a bad habit. Heroin addiction is widespread in the jade mining industry.

‘Shooting galleries’ are common in Hpakant. Miners often exchange lumps of jade for heroin. One evening, I saw dozens of miners lining up to by the drug.

“Without this I am very tired, but after the shot I feel happy to work again and can chase my dreams,” a miner told me.

In this remote area of Myanmar, heroin is cheap. One ‘hit’ can be bought for K2000. Perhaps not coincidentally, it is the black market price for a chunk of the lowest quality jade. 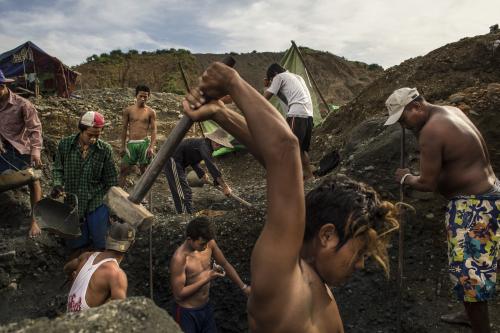 I first visited Hpakant on a photo assignment in July 2013 and have been back half a dozen times.

During a visit in 2014 I met a man who was worried that the area around Hpakant would be barren within a decade because of the environmental devastation wrought by jade mining. If that happens it will destroy any hope of the region’s rich endowment of jade being used to fund local development. Each year, large quantities of jade mined in Myanmar seep illegally across the border to China’s Yunnan Province, where jade is more highly prized than anywhere else in the world. Most of the revenue from the multi-billion dollar jade trade escapes government taxation.

In a report released last month, the natural resources watchdog Global Witness estimated that the trade is worth US$31 billion and its beneficiaries include powerful past and present members of the Tatmadaw, ministers in the outgoing government, drug lords sanctioned by the United States and companies owned by cronies.

When I returned to Hpakant this year my objective was to trace the routes by which jade is transported illegally through Myanmar to China. Jade traders said there were two main routes. One is from Hpakant to Yunnan Province via the Kachin State capital, Myitkyina and the second routes passes through Muse, opposite the Yunnanese town of Ruili, at the most important border trade crossing between Myanmar and China.

In contrast to the land route to Hpakant, the road linking Myitkyina and the border with China is the best I have travelled in Myanmar. Tiered mountains, shrouded in clouds and mist, and deep green forests, add an element of mystery to this majestic route. After passing through several Myanmar government checkpoints, I arrived in a border town called Kam-Pai-Tee. I paid K6,000 for the passbook needed to enter China and travelled in a shared car into Yunnan Province.

As our car left Kam-Pai-Tee, one of my fellow passengers, a Kachin blackmarket jade trader, complained about a recent experience with the immigration police there.

“A few weeks ago, I tried hiding a good piece of the raw jade stone to avoid paying the hefty fee for a jade smuggler,” she told me. “But a police officer found it and threatened to arrest me, so in the end I had to pay him about 200,000 kyats. I should have just entrusted it to the carrier who knows how to deal with them.”

Jade traders normally pass through the official border crossing empty-handed, trusting the covert transit of their jade to professional smugglers. Traders told me that the smugglers’ fee is based on the stone’s weight. If the stone is of exceptional quality, the smugglers will negotiate for a higher fee. 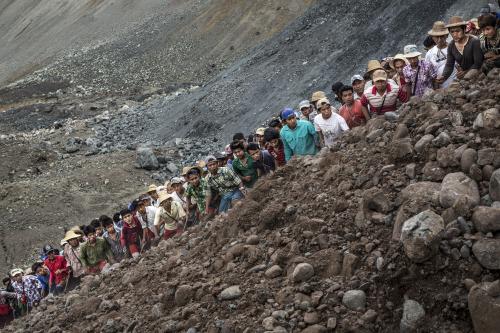 We arrived at the county seat of Yinjiang, where I discovered that most hotel rooms were booked. I later learned that these dimly lit premises were where jade traders and smugglers meet to pass over the stones.

Although the trade is illegal under Myanmar law, I visited many businesses in Yinjiang that displayed raw jade from Myanmar, including a bustling open-air market in the centre of town.

Some shops display a Chinese certificate of legality, but others do not.

“Stones enter the Chinese market without Myanmar government tax,” a Kachin trader said as he displayed a beautiful apple-sized piece of jade that he kept in a safe. He expects the stone to fetch as much as K50 million.

Returning to Kachin State, I passed a camp for refugees displaced by fighting between the Tatmadaw and the KIA. My head swam with questions: How much of the jade produced in Myanmar is disappearing uncontrolled into China? What is the value of the illegal trade? Most importantly, how could this lost revenue be used to help rebuild the lives of refugees, dirt-poor miners and other residents of Kachin State? I intend to return to the jade trail in search of answers.

A version of this photo essay appears in the 2015 extractive industries photo documentary project of the Natural Resource Governance Institute, a non-profit organisation based in New York that focuses on policy and advocacy. The project aims to capture the complex political, environmental and social realities at mining sites in Myanmar.