YANGON — A consortium of ten Western donor governments is set to launch a new “Joint Peace Fund” by the end of 2015 to bolster Myanmar’s fraught peace process.

Led by the European Union, the United Kingdom and Australia, the fund will augment existing bilateral peace support arrangements between Western governments and stakeholders in Myanmar, and will focus on strengthening the institutions and processes created through the National Ceasefire Agreement (NCA), which was scheduled to be signed this week.

After four years of negotiations, just eight ethnic armed groups have committed to signing on to the national ceasefire. Significant holdouts include some of the country’s most formidable armed groups, including the Kachin Independence Army and the United Wa State Army.

The government recognises 15 ethnic armed groups as part of the NCA process, but has thus far declined to enter into talks with six groups – including the Ta’ang National Liberation Army (TNLA), the ethnic Kokang Chinese Myanmar National Democratic Alliance Army (MNDAA), as well as the Arakan Army (AA), all of which are currently engaged in open hostilities with Nay Pyi Taw.

The Myanmar Times estimates that donors will allocate US$30 million through the fund over a two year period. Last year, the Japanese government promised $96 million towards aid efforts in ethnic areas, although Tokyo’s concentration on development will likely differ from the Joint Peace Fund’s focus on the peace process itself and engaging with communities affected by it.

The new fund follows the dissolution in March of the Norwegian-backed Myanmar Peace Support Initiative (MPSI), which faced significant criticism for its purported failure to engage with affected communities.

“The biggest concern is that the peace fund is going to be used to bolster elite perspectives in the process,” said David Mathieson, senior researcher on Myanmar at Human Rights Watch. “One of the major shortcomings of the peace process [thus far] is a lack of community participation. That would be the emphasis that I say the peace fund has to address.”

Alex Bookbinder is an independent journalist and researcher focused on Myanmar and Southeast Asia. Based in London, he lived and worked in Myanmar from 2012-2016, and was a founding staff member of Frontier in 2015. 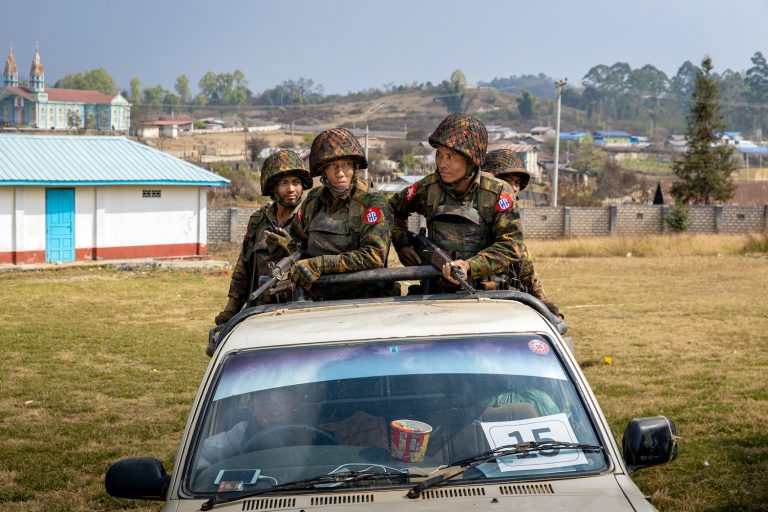 Cancelled constituencies have grabbed headlines, but conflict and armed groups play a much bigger role in determining the outcome and fairness of elections in Myanmar.
BY Kaung Hset Naing, Hein Thar & Lawi Weng