Arrested last year, Khaing Myo Htun was held in custody for eight months before being charged for his role in documenting human rights abuses by the military in Rakhine State.

Found guilty of defamation and incitement under section 505 of the Penal Code, his 18-month sentence was immediately denounced by his lawyer and regional rights groups as a miscarriage of justice.

“The Sittwe Township court judge did not analyse the evidence,” said U Oo Kyaw Thein, an advocate and member of the defendant’s legal team. “It’s not fair.”

At issue in the case was the April 2016 release of a statement by the Arakan Liberation Party, of which Khaing Myo Htun served as deputy spokesman, alleging the military had forced Rakhine civilians to act as porters during clashes with the Arakan Army earlier that year.

Later that month, Khaing Myo Htun was summoned to the office of Rakhine State Minister for Security and Border Affairs Colonel Htein Lin and told he would be prosecuted if he could not substantiate the allegations.

Four days later, he submitted to authorities a collection of video testimony from nearly 20 villagers across several locales where the fighting had occurred, all corroborating the claims in the statement. He was nonetheless taken into custody on July 25.

No others were charged, despite several other ALP members being involved in the drafting of the statement, which bore the official stamp of the group’s central leadership team.

“This is just the latest example of Myanmar’s judicial system serving the military rather than the public interest … Myanmar’s human rights defenders are imprisoned for helping innocent people get justice for wrongs they’ve suffered, and that shows how dire the human rights situation is in Myanmar right now.” 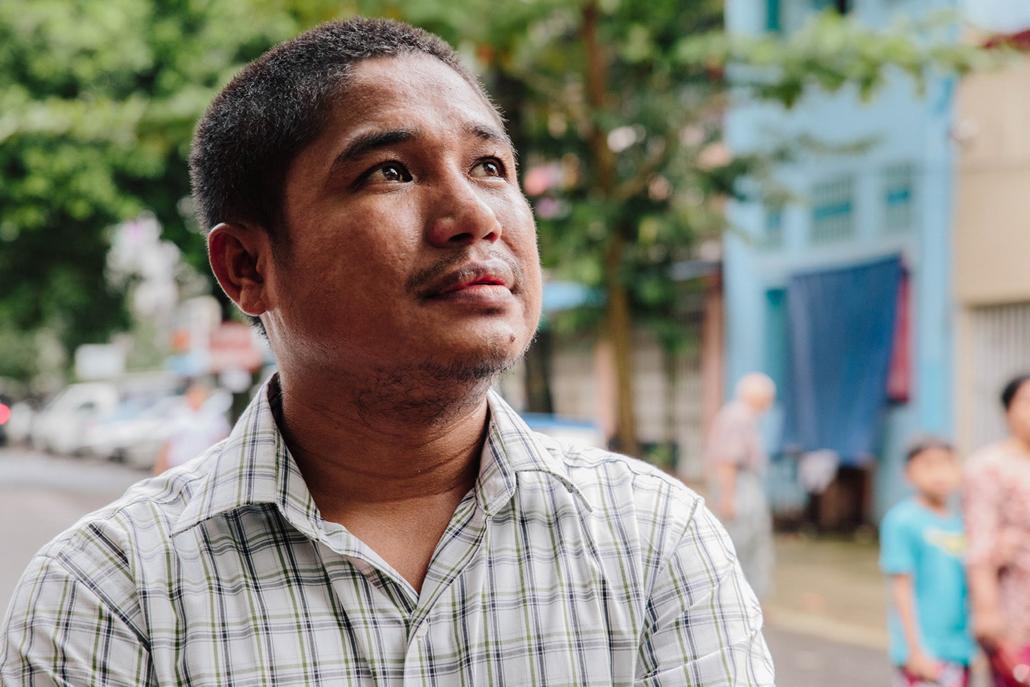 Khaing Myo Htun’s trial was biased from the outset, according to a dossier prepared by his supporters and seen by Frontier. No defence objections were permitted by the presiding judge, who also met privately with the state prosecutor to discuss the case on more than one occasion. Proceedings were delayed numerous times after the judge ruled hearings would take place every fortnight, rather than every week. Prosecution witnesses failed to attend court when summoned without sanction or reproach from the bench.

Thursday’s sentence, handed down after the judge said that Khaing Myo Htun had failed to substantiate the forced portering allegations in the statement, came just weeks after two defence witnesses testified they had been forced to act as porters by the Tatmadaw.

Outside court on Thursday, flanked by Buddhist monks, friends and other supporters, Khaing Myo Htun said the court had “no reasonable grounds to take action” against him.

The ALP is a signatory to the Nationwide Ceasefire Agreement, the attempt by the previous government to negotiate an end to decades of civil conflict in Myanmar, which marks its second anniversary on Sunday.

Under the terms of the accord, signatories are obliged to bring any disputes involving their members to the Joint Monitoring Committee, established as a conflict resolution mechanism between the armed forces and non-state armed groups.

Complaints not resolved by that forum are required to be sent to the Joint Implementation Coordination Meeting for further dialogue, after which they can be referred to criminal courts for further action if needed.

Neither body was engaged to mediate between the Tatmadaw complainant and Khaing Myo Htun, who said after his trial concluded that the judge had also delivered a verdict on the ceasefire accord.

Khaing Myo Htun confirmed to Oo Kyaw Thein that he would not contest the verdict.

“He said he doesn’t trust the judicial system anymore, so he has no intention of appealing,” he said.