Is the Tatmadaw toughening up on the peace process?

Two recent moves by the Tatmadaw directed at ethnic organisations have raised doubts about where it stands on the peace process.

ON JULY 26, the Office of the Commander-in-Chief, Senior General Min Aung Hlaing, released a statement banning the use by non-state armed groups of ranks used in the Tatmadaw.

The statement came after state-owned Kyemon, and some private sector papers, including Daily Eleven, Standard Time, The Voice, and 7Day Daily, referred to an official with a people’s militia group in Kachin State’s Bhamo District as a major.

In another development, a three-day meeting that the Committee for Shan State Unity had planned to hold last month in Chiang Mai was blocked by the Thai authorities, who said they were acting on a request from the military attaché at the Myanmar embassy in Bangkok.

These examples of heightened Tatmadaw sensitivity have some wondering if it may have changed its attitude to the peace process.

The second part of the statement has caused concern, including in the news media. It states that military ranks, “which are entitled only for military personnel of the Tatmadaw (Army, Navy and Air), are not to be used in reference to persons of other unconcerned organisations; and that military ranks are to be used correctly in line with existing laws”.

This has created confusion among journalists who have long used ranks when referring to senior members of armed ethnic groups. Examples include the chair of the Karen National Union, General Saw Mutu Say Poe, Pa-O National Liberation Organization patron Colonel Khun Okker, and leading members of the Kachin Independence Organisation, such as General N’Ban La and Major-General Gun Maw. Journalists are unsure if they can continue to use military ranks to refer to these and other members of ethnic armed groups.

Journalists sought a clarification at a meeting with the Tatmadaw that was held at the Ministry of Information in Nay Pyi Taw on July 27 and were told only that the statement was in accordance with the law.

The decision by the Tatmadaw to intervene against the meeting of the Committee for Shan State Unity due to be held in Chiang Mai from July 20 to 22 also caused disquiet. The committee comprises Shan ethnic armed groups, political parties and other organisations. Its members include the Shan State Progress Party/Shan State Army-North, which is not a signatory of the so-called Nationwide Ceasefire Agreement.

It was different when the peace process began under the government of former president U Thein Sein. He wanted a binding ceasefire agreement involving all armed ethnic groups to lay the foundations for political negotiations on constitutional reform and the creation of a Federal Democratic Union of Myanmar.

A significant feature of the process under Thein Sein was the cooperation with the ethnic armed groups that enabled them to meet and negotiate key issues among themselves ahead of meetings with the government. This was appreciated by the ethnic armed groups, which were scattered throughout the country and had little opportunity to meet together until the peace process began.

Under the military dictatorship, ethnic minorities were suppressed and meetings of their leaders could have dramatic consequences. On February 7, 2005 – Shan National Day – Shan Nationalities League for Democracy leader U Hkun Tun Oo met other Shan at his home to discuss political reform.

He was subsequently arrested and sentenced to 93 years in prison for treason; another SNLD member received a sentence of 85 years, and General Hsur Hten of the Shan State Progress Party was given a term of 106 years.

When Thein Sein was president, assistance was provided to ethnic groups to hold meetings and discuss issues associated with the peace process. This enabled conferences to be held at the KIO headquarters at Laiza in 2013 and 2014, and a summit of ethnic armed group leaders to take place at the KNU’s headquarters at Law Khee Lar in Kayin State in June 2015. Each of these gatherings was attended by about 100 people.

The leaders of armed ethnic groups were also permitted to hold meetings in cities. The peace process under Thein Sein was fully supported by the Tatmadaw led by Min Aung Hlaing. This helped the Tatmadaw to win the trust of some armed ethnic groups – including the KNU, which had been fighting the government for more than 70 years – and resulted in eight of them signing the Nationwide Ceasefire Agreement in October 2015.

Now we have a situation in which the Tatmadaw has interfered to block a meeting of Shan groups and has issued a statement banning other organisations from using military ranks.

Has the Tatmadaw’s attitude towards the peace process hardened? Has it changed its policy? These are open questions. 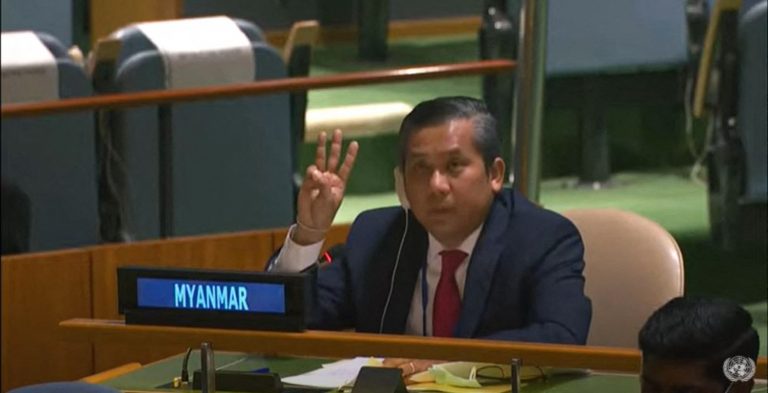 Myanmar ambassador to the United Nations Kyaw Moe Tun has called for "strong action" against the regime, as dozens are killed in the military's latest crackdown.
BY AFP